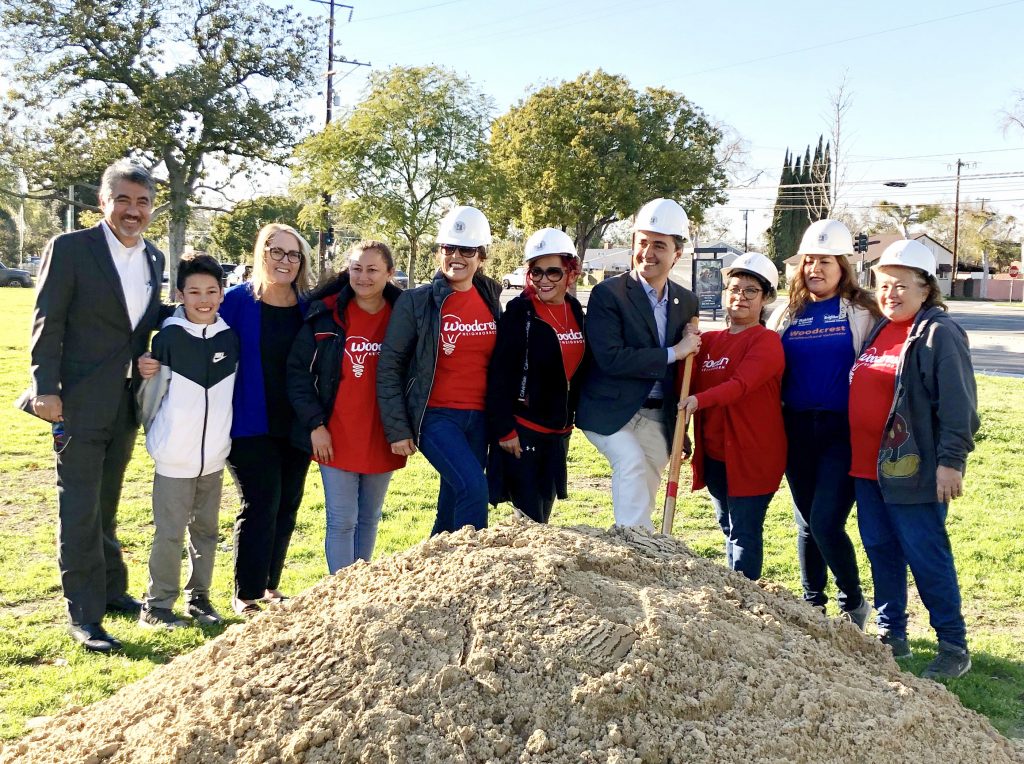 Members of the Woodcrest Community Group, who never gave up advocating for needed improvements at the neighborhood park, enjoyed groundbreaking ceremonies on February 19. Renovations are expected to be completed by fall of this year at the 3-acre park located adjacent to Woodcrest School at 440 W. Orangethorpe in Fullerton.

Mayor Silva credited not only the sponsor groups including St. Jude Healthy Communities Initiative, Womens Club of Fullerton and Kiwanis International, but the community group who kept the issue in the forefront. He suggested they continue to lobby him on a couple of related issues, such as opening a city recreation office within the adjacent apartment building.

In 2012, NeighborhoodWorks OC and Habitat for Humanity OC partnered to host open dialogue at the Woodcrest Community Group’s meeting about the challenges and issues the neighborhood was facing.

After an initial meeting with the Woodcrest Community Group in late 2013 the Women’s Club of Fullerton and  Kiwanis International joined forces to raise funds for new playground equipment for the park and St. Jude Healthy Communities Initiative came on board with a grant for state-of-the-art outdoor fitness equipotent to be installed when the renovation plan was approved.

The Woodcrest Park renovation was placed on the city’s approved list of projects for 2016/17 and the plan was passed by the Parks & Recreation Commission in September of 2017.

In addition to the playground and fitness equipment grants the project is supported by $850,000 from Park Dwelling Fees, $12,543 from Measure M2, and two grants: $499,250 from the CA Dept. of Land & Water Conservation; and $364,550 from the Housing Related Parks Program. (The HRPP grant was transfered from one originally intended for Pearl Park, next to the Garnet Community Center, which is still undergoing negotiations with property owners before improvements there can begin.)

Renovations at Woodcrest Park include new picnic area features, play-structure, outdoor exercise equipment, new restroom, basketball court, lighting, landscaping and hardscaping, parking lot, street and curb improvements and more.
Added to the project were improvements to the adjacent Woodcrest School softball field (which is used by both the city and school in a joint use agreement).

Council approved a design contract with BGB Design Group for development of construction documents on Feb. 6, 2018 and the $1.6 million construction contract was awarded to FS Contractors Inc. at the Nov. 20, 2018 council meeting.