A local non-profit youth football league in town, the Fullerton Bears, which provides opportunities for low income kids, is facing eviction by OC Parks on March 3rd from their home field at Clark Park, even though they signed an agreement with OC Parks to use the fields through 2021, and even made renovations costing over $20,000.

According to the County, their agreement with the Bears was terminated in January 2019 because the non-profit was delinquent in paying their fees.

According to the Bears’ president Fred Jung, communication between the county and the non-profit has been fraught with miscommunication, and even a lack of communication.

As documented in the county contract fees for year 2017 were waived. Discrepancies start with year 2018.

Records show that the first payment notice the Bears received from the county was in May of 2018 with the threatening title “Notice of Final Demand – Possible Legal Action” for a $995.21 balance of a previous invoice the Fullerton Bears never received or paid. Mr. Jung called the phone number provided on the notice and spoke to a collection officer who did not know what the bill was for or when any previous bill was partially paid.

Following this, Jung contacted then-Supervisor Shawn Nelson’s office [It was Nelson who originally helped the Bears get the agreement with the county] to inquire about the notice. Nelson’s Chief of Staff Cardenas wrote back in a text message “Disregard the letter. The matter is resolved. You’ll be assessed no fee. A letter confirming that is forthcoming.” No letter was received but the error seemed corrected. (The text message from Nelson’s Chief of Staff was sent to the Observer.)

The County produced two records to show they’d contacted Mr. Jung previous to the “Second Notice of Delinquent Invoice” he received in November 2018.

1) An email (though no invoice) dated July 18, 2018 from the Accountant/Auditor reads “We haven’t received the payment for Season 2 yet. Please send a payment of $9,540 to the address below.”  After receiving that email Mr. Jung contacted Jonathan Nix of OC Parks, and Nelson’s office in confusion since he had received no original bill and disputed the amount.

According to the amendment to the 2017 agreement signed by both Mr. Jung and the county on April 25, 2018, fees for year 2017 were waived, and the $9,540 fee was for a full calendar year. But, because the City of Fullerton was still programming the fields through the month of June 2018 the fee should have been half as much. (The Bears took over operations in July.)

Nelson’s Chief of Staff assured him that they would look into it. Jung returned the county’s email the next day with the message that “The administrators of our non-profit are currently actively working with County officials to remedy this concern.”

2) The County also sent the Observer a copy of an official invoice dated September 24, 2018. The invoice, which shows no  indication that the account is delinquent, does not include an account number. It indicates the bill is for the 2018 Spring and Fall Season. The “bill” is addressed to Mr. Jung’s home address. However, Jung says he never received it.

Prior to the November 15, 2018 “Second Notice of Delinquent Invoice” demanding $9540 payment Jung said he received no invoices (other than the May 24, 2018 threat of legal action demanding $995.21 which Nelson’s office said was in error).

Also odd is that the May and November notices each list different account numbers – while the September 24, 2018 invoice (sent to the Observer by the county) leaves the account number space blank.  All three documents are addressed to Mr. Jung’s home address and list the Orange County Treasurer-Tax Collector as return address.

According to Jung, Fullerton Bears volunteers attempted repeatedly to contact County officials to understand why they were being billed for a full year when the Fullerton Bears and Clark Park were under the purview of the City of Fullerton’s Parks and Rec Department from March-June of 2018, and the Bears exclusive use of the fields did not start until after that.  They also reached out to Nelson’s office to obtain information on this $9,540 billed assessment.

The issue was still unresolved when, on February 5 of this year a “Notice of Termination” was received by Fullerton Bears volunteers from Mr. Inouye at OC Parks. The notice was dated January 31, 2019 and gave the Bears 30 days to vacate the property and read “…any personal property left on the License Area ten (10) days after…shall be deemed, at the County’s option, to have been transferred to the County.”

Among the unresolved issues in this message was what was to become of the $18,000 scoreboard purchased and installed by the Bears with a county permit. It took a few weeks to get a call back from Inouye. In the meantime Mr. Jung paid the contested bill in full – afraid to lose the use of the fields for the Bears over an accounting dispute.

When Inouye finally returned Jung’s calls he told Mr. Jung that if he could get proof from the city that the Bears had only partial use of the fields in 2018 the county would reimburse him for the over-billing.

Mr. Jung obtained and sent Mr. Inouye the proof from the city, but was told that it would not make a difference in the termination. 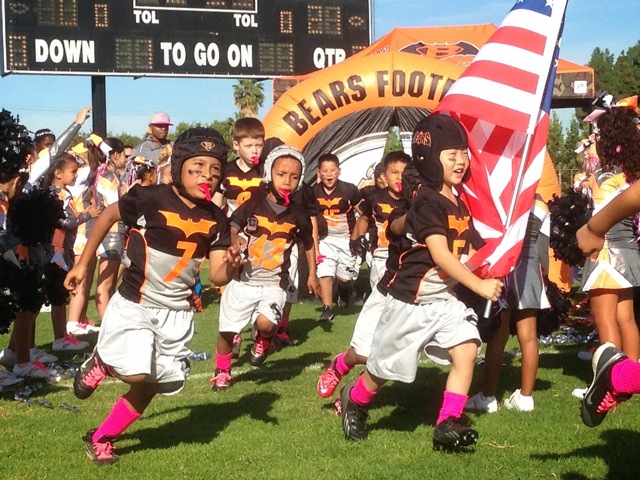 The Bears on Opening Day.

Meanwhile, 600 local youths, many of them underprivileged, are about to lose access to their field.

“I’m saddened to hear this,” said former OC Supervisor Shawn Nelson, “The Bear’s use of the field put the space to work for the citizens and also allowed a group in desperate need some relief. Once the Bears showed some interest in using the field the city suddenly awoke from its slumber and wanted the park for its own use…I hope [current] supervisor Chaffee can step in and clear this up.”

According to the statement below received from OC Parks, the city will be taking over operation of the fields.

“We have collaborated with the City of Fullerton and are ready to issue a permit to Fullerton to operate those fields on our behalf for the spring 2019 season, with a schedule of play that not only introduces other groups to the park, but also provides continuing opportunity for [the Bears] to play – albeit through the City programming schedule rather than directly through the County.”

The City of Fullerton sent the following message answering the Observer question to Recreation Manager Clements, “Is the city being licensed by the county to operate on the fields formerly licensed to the Bears for the Spring season?”

“The City applied for and received a permit from OC Parks on February 11, 2019 for programming of our sports partnership programs only. This permit, which the city applies for every year in the Spring, is current through June 30, 2019. Until now, the Bears contract with OC Parks circumvented that permit and the City of Fullerton Parks and Recreation Department has not used Clark Park during the Spring session. As it stands, there are no sports partnerships currently programmed for Clark Park, even though they currently have a valid permit through the end of June.”

“I dread putting 600 plus low income and at risk youth in jeopardy,” said Jung.