Friends and Supporters Rally to Save Coyote Hills

On Tuesday, March 5th at 5:30pm a large crowd of local residents gathered outside Fullerton City Hall for a rally to save Coyote Hills, just prior to that night’s city council meeting.

The rally was organized by the Friends of Coyote Hills in response to the recent State Supreme Court decision not to hear the Friends’ appeal, which basically allows the city’s development agreement with Chevron to go forward—760 houses and a shopping center.

Despite this setback, the Friends and their supporters remain hopeful that the city will continue to raise funds for the full purchase of West Coyote Hills. Thus far, $30 million has been raised to purchase two large parcels of land. 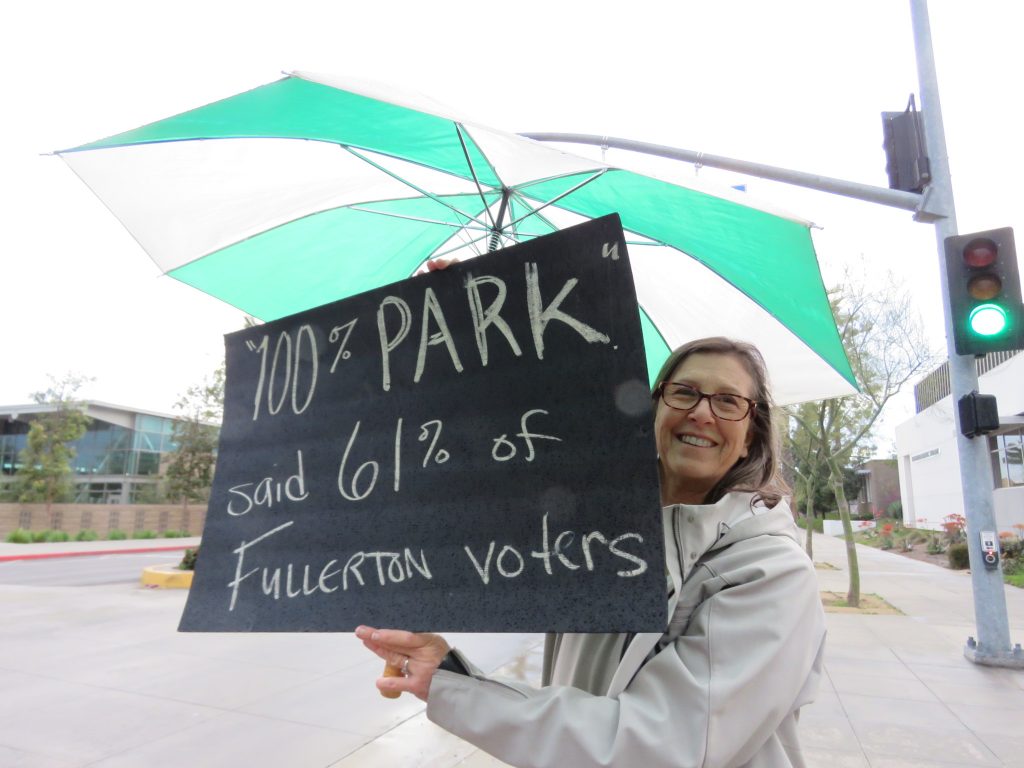 The rally drew people of all ages and backgrounds, and even one dog, who carried signs as cars drove by along Commonwealth, urging the city and its residents to continue the effort to save all 510 acres of West Coyote Hills.

As the city council meeting began at 6:30, some of the attendees of the rally entered the city hall and spoke in favor of saving Coyote Hills.

“The courts are done, but that doesn’t mean that the city can’t still continue moving forward towards purchasing as much as possible,” said Jane Rands, “We’ve had a lot of progress over the last year, raising over $30 million with the partnership of city, elected officials, Friends of Coyote Hills, and the community.”

“We are committed to raising the funds needed to purchase all of the land,” said Diane Vena, “We wish to work with you, the council, and Chevron to save it all. The winners will be everyone.”

Vena listed numerous benefits of not developing West Coyote Hills, such as protection of wildlife including the rare/endangered species, migratory birds, and rare plants. Not paving the land will allow rainwater to be absorbed into the ground and not carry polluted runoff to the ocean. 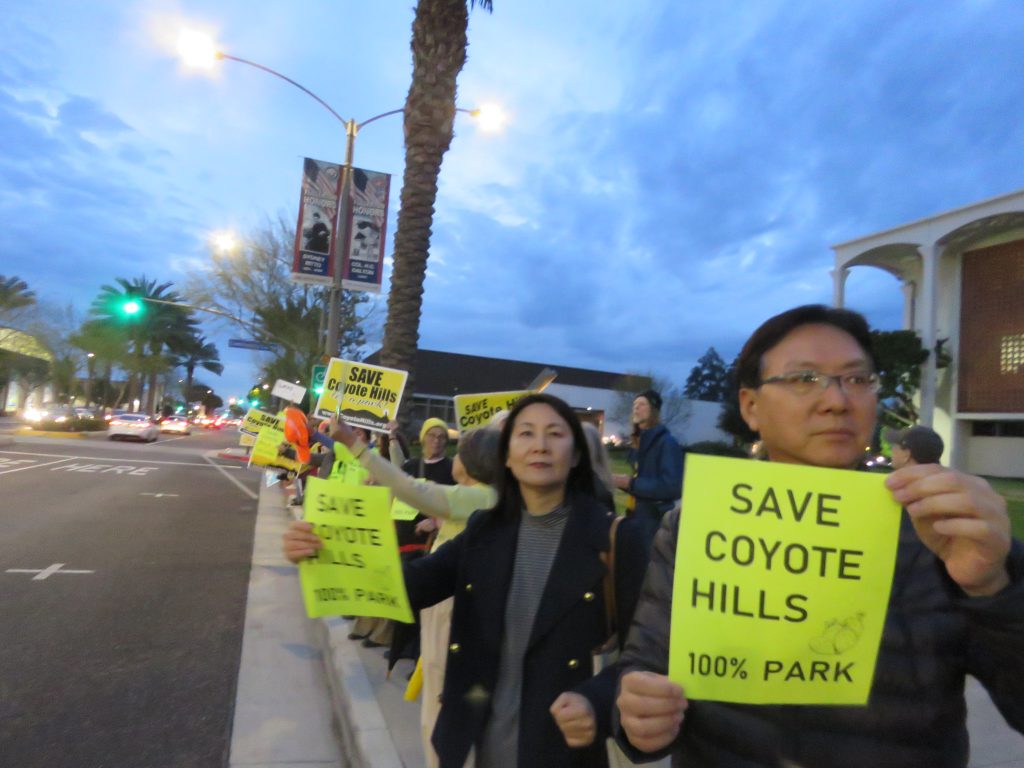 Nancy Estes, a 50-year resident of Fullerton, said “I, along with at least 60 percent of the people in Fullerton [those who voted no on Measure W], support keeping Coyote Hills 100% a wildlife preserve for this community to enjoy as well as the surrounding communities…It’s desperately needed. We don’t need another 760 homes and all the traffic and everything that implies.”

Jensen Hallstrom, who urged council to support preserving all 510 acre, reminded them that East Coyote hills has been almost completely developed, and so nearly half of the original Coyote Hills has already been built upon.

A resident named Mary said she took issue with the court’s interpretation that Measure W meant “that the citizens wanted a better deal.”

“I don’t understand how 61% of the citizens voting against developing the land could be interpreted as meaning we wanted a better deal,” she said, “We just want the land left as it is, undeveloped, so that future generations can enjoy it.”

Karen Lang-McNabb, who has been a member of the Friends of Coyote Hills for nearly 20 years, said that when they first started trying to save Coyote Hills, they were told, ‘Don’t bother. It’s a done deal. Just leave it be—it’s gonna be developed.’ She said that, contrary to those statements, the city has managed to raise funds and set aside portions to be saved. 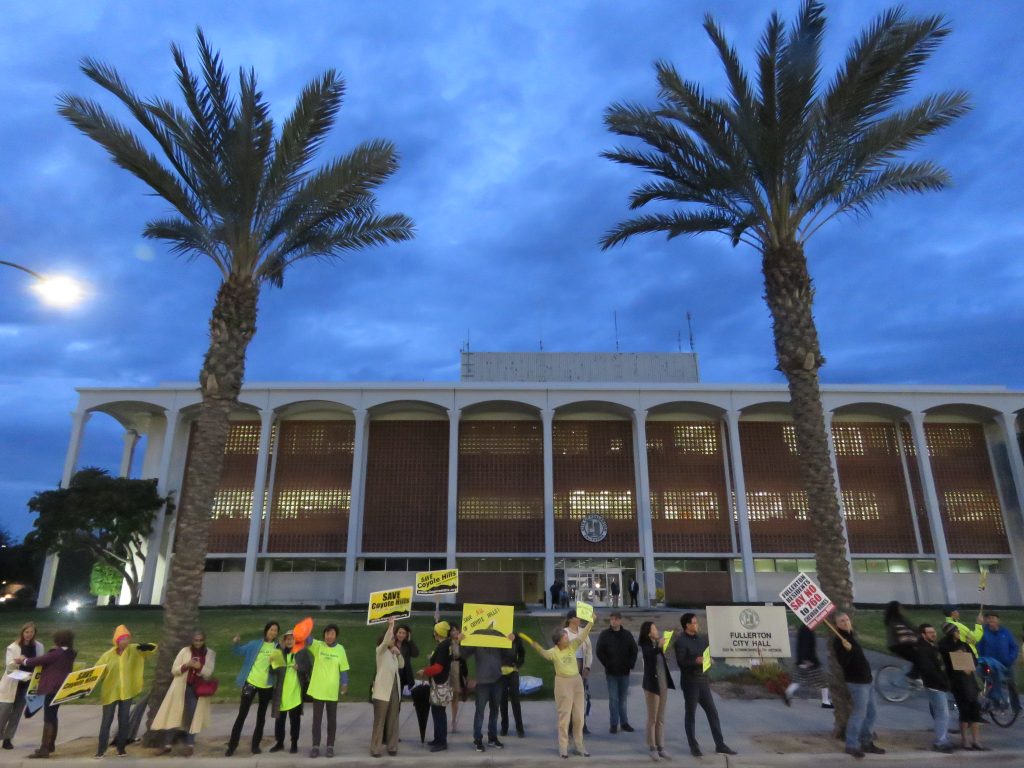 “If we have the vision all together to work on this, it’s possible to still save all 510 acres,” said Lang-McNabb, “I’d like to ask you respectfully to work with us to make that happen because I think we can do it.”

Jose Trinidad Castaneda said that if the city wants to add new housing, it should be transit-oriented, near job centers and transportation centers, not in the last remaining open space, Coyote Hills.

Rob Hallstrom urged people to look at a Google map aerial view, to see the need for open space amidst our densely populated area. 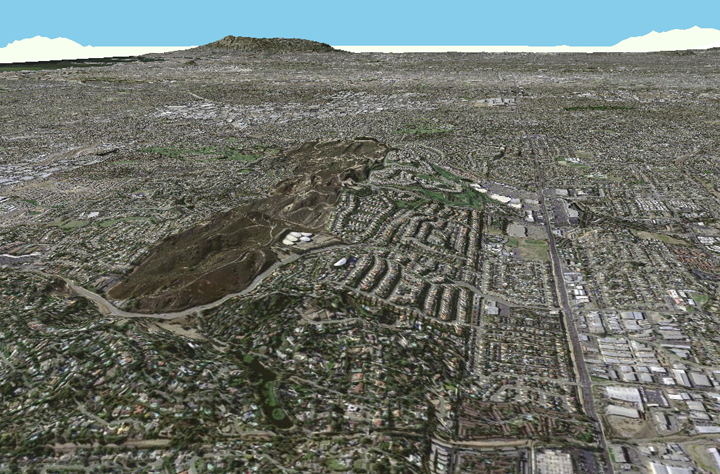 Some members of the group Open Coyote Hills [which has worked with Chevron and the city for 20 years favored some development] spoke in favor of the court’s ruling and, noted the benefits Chevron would provide to the city as part of their development agreement.

“With the recent State Supreme Court ruling, I am thrilled to know that over 200 acres of open space will indeed be preserved, including the Robert E. Ward Preserve,” said Debra Pember, owner of Developer’s Edge and member of  the Building Industry Association.

Chris Heuser, longtime Fullerton resident and Open Coyote Hills member, said, “Finally, we can begin to open West Coyote Hills to make it accessible to the public to enjoy and participate.” She cited the trails Chevron would develop, the vista parks, and other amenities.

“I want to speak in favor of the plan for moving ahead for West Coyote Hills,” said Molly McClanahan, also an Open Coyote Hills member. She said she looks forward to the thousands of school children who will be able to learn about nature once Coyote Hills is opened.

“In a perfect world, that 510 acre preserve would be wonderful,” said Open Coyote Hills member Kate Dalton, “But dealing with the real world, that’s not feasible.”

After public comments, City Manager Domer said he will be meeting with Chevron next week to talk about purchasing neighborhoods 1 and 3, as funds have been secured for that purpose (about $30 million), and the city has already acquired neighborhood 2.

“So with [neighborhoods] 1, 2, and 3 we basically have a contiguous open space that is everything between Euclid and Gilbert St,” said Domer, “We’re in the beginning of the process for the initial trail development, to get the public using the West Coyote Hills area as soon as possible, and for remediation from past oil issues and invasive species, as well as other amenities provided by Chevron as part of their development agreement.”

Mayor Silva and Mayor Protem Fitzgerald were the only two council members to respond directly to the public’s comments and the rally, and their comments were somewhat contradictory.

Mayor Protem Fitzgerald expressed excitement at the possibility of Chevron providing their agreed-upon amenities, she also blamed the Friends for making things difficult.

“Even though the continued litigation by the Friends has made it difficult to raise money,” she said, “the constant hard work of community members and the city and our state representative have yielded…$29 million [to acquire some of the land].”

Mayor Silva said, on the contrary, that it was precisely because of the Friends of Coyote Hills’ lawsuit that the city and state legislators had time to raise money.

“The litigation allowed us the time to get that $15 million from the state and the $4.8 from the bond fund. If not for that time frame, we would have only $9 million to purchase land,” Silva said, I’d like to see them [Chevron] give us a little more time to generate more funds for purchasing more of the property.” 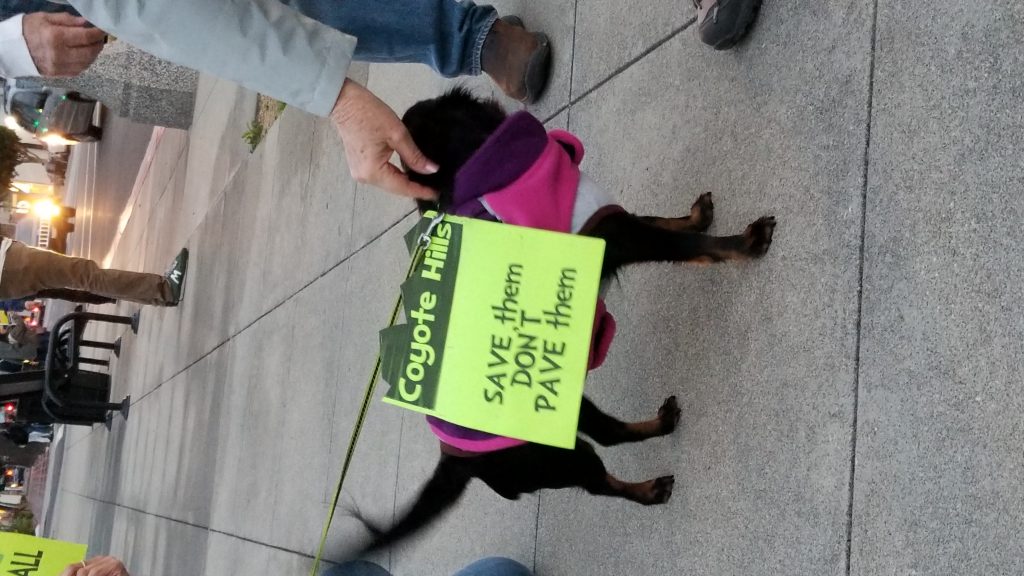