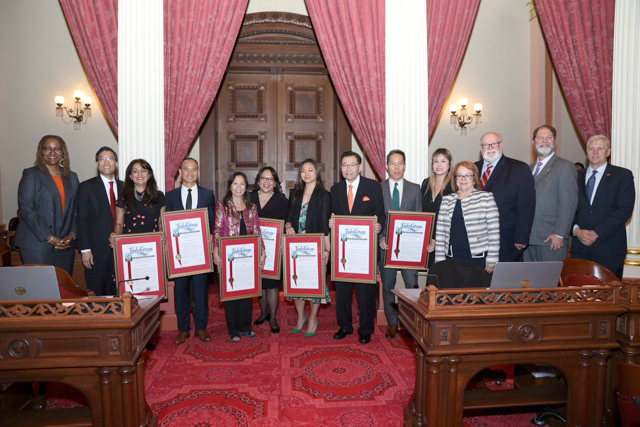 The California State Senate celebrated May as Asian Pacific Islander American (APIA) Heritage Month on May 13 with the adoption of Senate Concurrent Resolution (SCR) 30. Awards were presented to distinguished Asian & Pacific Islander Americans during a session dedicated to honoring leaders who have demonstrated excellence in the areas of civic engagement, civil rights, culinary arts, entertainment, journalism, and public service.

•Excellence in Philanthropy:  Lata Krishnan, Founder and Co-Chair of the American India Foundation

SCR 30 commends California’s Asian Pacific Islanders for their notable accomplishments and outstanding service to the state.  Senator Thomas Umberg supported this resolution to establish May 2019 as API Heritage Month with strong support from the Joint Caucus members.

“Orange County has the third-largest Asian Pacific Islander American population nationwide, and their contribution to our community extend greatly into our diverse culture, economy, and many other aspects that enrich all of our proud neighborhoods,” said Senator Thomas J. Umberg. “The group of diverse and extraordinary leaders that are honored empower the APIA community in California and in this country. I thank them for their tremendous contributions and service to the community and abroad.”

Over five million APIs account for over 14% of the state’s population constituting one of the fastest growing demographics. The first Asian Americans came to California in the 1800’s as independent miners and laborers. The impact of APIs in the state continues to be evident through the accomplishments of the honorees as well as the presence of increasing API elected officials in state and local government. Asian and Pacific Islander Americans continue to cultivate, advance, and lead in the fields of art, fashion, business, technology, education, science, government, law, humanities, medicine, sports, and entertainment.