“As Mayor of Fullerton, I share the public’s concern about the Officer involved shooting from Friday, July 5th. I understand the need for information and want to assure you that I have been in constant communication with Fullerton Police Chief Dunn about our internal investigation as well as the investigations by the Anaheim Police Department and the Orange County District Attorney’s Office. For full public transparency and accountability, these investigations will be comprehensive, but they do take time to make sure all the facts are known.

“I am also working with Chief Dunn to make sure that the release of video evidence, per Assembly Bill 748, is met, and in this case, exceeded, as the Fullerton Police Department will release relevant video evidence in the next few days.

“Incidents like this are tragic for all involved. As a father, I empathize greatly with the sorrow and pain that the William’s family is experiencing. I want everyone to know that releasing this information is very important to us, and to our continued commitment to accountability and transparency to the community we serve.”

July 11 Update: The Fullerton Police Department will be releasing Body Worn Camera footage of the Officer Involved Shooting that occurred on July 5th, within a week.

According to Lt. Jon Radus:

“Fullerton Police Officers wear body worn cameras (BWC) as a standard practice, and they have done so since 2013. The officer involved in this particular OIS was wearing his BWC, which captured the OIS as it occurred. The BWC footage, independent witness interviews, physical evidence, and an interview of the officer, will all be taken into account in the independent investigations.

“Effective July 1, 2019, California State Assembly Bill 748 requires any law enforcement agency involved in a “critical incident” such an OIS or “use of force causing great bodily injury or death” to release any relevant video or audio footage within 45 days of the incident.

“In the coming days, the Fullerton Police Department will be releasing our second Critical Incident Community Briefing, explaining what occurred during the OIS on July 5, 2019. It will include relevant BWC footage, photos, and a description of what occurred leading up to the OIS.

“These briefings take time to complete, and they must take into account the investigative process to ensure that potential witnesses, and those involved in the incident who may not yet have been interviewed, are not adversely affected by the information released and that the information they provide is based on their independent recollections. There is a balance that must be struck between the release of information and the need to keep the public informed. This is a balance that we respect, and must maintain, in order to complete thorough, thoughtful, and diligent investigations.

“While AB 748 allows for 45 days to release relevant BWC footage and audio relating to the incident, we will be releasing this information roughly one week after the incident. Every incident is different, and the time it takes for us to release information will be different for each incident depending on the number of officers and witnesses involved, the overall complexity of the case, and when all other agency interviews are completed.

“The Critical Incident Community Briefing regarding this OIS will be released directly to our media partners, and it will also be posted on our social media platforms (Facebook, Instagram, and Twitter) simultaneously so the community has the opportunity to view it immediately.

“It is our hope that the coming Critical Incident Community Briefing will help answer the many questions our community has regarding this tragic incident.”

July 9 Update: The Orange County District Attorney’s Office is investigating an officer-involved shooting involving an on-duty Fullerton Police officer in Anaheim on July 5, 2019 just after 7pm. The replica handgun (shown below) designed to look identical to a Beretta 92 FS handgun was recovered at the scene. 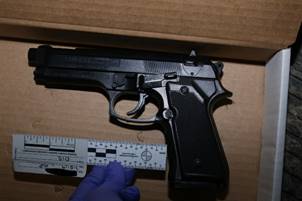 photo of the replica gun found at the scene

An on-duty Fullerton police officer in full uniform was driving in his marked police SUV on the eastbound 91 freeway while taking his police K-9 to the veterinarian for a medical procedure.   He observed a 17-year-old female driver, who was also eastbound on the 91 freeway at a high rate of speed, near Glassell Avenue. At some point, the two vehicles made physical contact. An officer-involved shooting occurred and a replica Beretta 92 FS handgun was recovered at the scene next to the female.

The 17-year-old was transported to the hospital where she later died.

An eyewitness said the teen was pointing the replica gun (which appeared to be a real gun) at the officer as he was shouting commands to her. She said she felt bad for the family but didn’t see what other choice the officer had.

July 5, 2019: Just after 7pm on July 5, a Fullerton Police K9 officer called in over the police radio that he had been involved in an Officer Involved Shooting. The officer had shot a 17-year old on the eastbound 91 freeway east of Kraemer Blvd in Anaheim. The young woman,  later identified as an Anaheim resident, was transported to a local hospital where she died. Her name is not being released due to her age.

The circumstances that led to the shooting are under investigation and are not immediately available, according to Sgt. Daron Wyatt, Anaheim Police Department’s public information officer.

Anaheim Police Homicide Detectives said an item “appearing to be a handgun” was recovered at the scene, though they declined to confirm the item found was a hand gun, According to Sgt. Wyatt, “until it is examined forensically we cannot provide more details.” (Further details were provided by the OCDA on July 9. See above)

The California Highway Patrol closed the eastbound 91 for several hours while investigators processed the scene.

Since the shooting occurred within the Anaheim city limits, APD Homicide Detectives are investigating, along with investigators from the Orange County District Attorney’s Office. Fullerton Police will complete a separate administrative investigation.

Investigators are asking anyone who witnessed the incident, and have not already been interviewed, to contact Crime Stoppers at 855-TIP-OCCS or www.occrimestoppers.org. 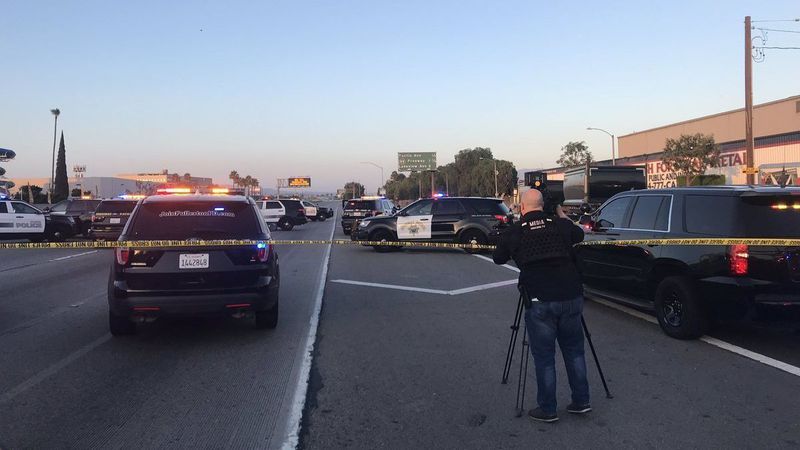