A Place for Everything, and Everything in Its Place @ CSUF Begovich Gallery

The CSUF Begovich Gallery presents A Place for Everything, And Everything in its Place, an exhibition featuring nearly 50 years of works of art collected by the College of the Arts at California State University, Fullerton. Highlights include prints produced at the renowned Gemini G.E.L. Workshop, photographs from the Andy Warhol Photographic Legacy Program, and works by distinguished artists such as Laurie Lipton, Robert Rauschenberg, Masami Teraoka, and Rachel Rosenthal to name a few. The collection also brings attention to individual artists affiliated with the University, who made considerable contributions to contemporary art in southern California and beyond. These artists include former faculty (Darryl Curran, John Leighton), students (Patrick Nagel, Ann Phong), and Art Alliance members (Florence Arnold, Rosalyn Chodos). 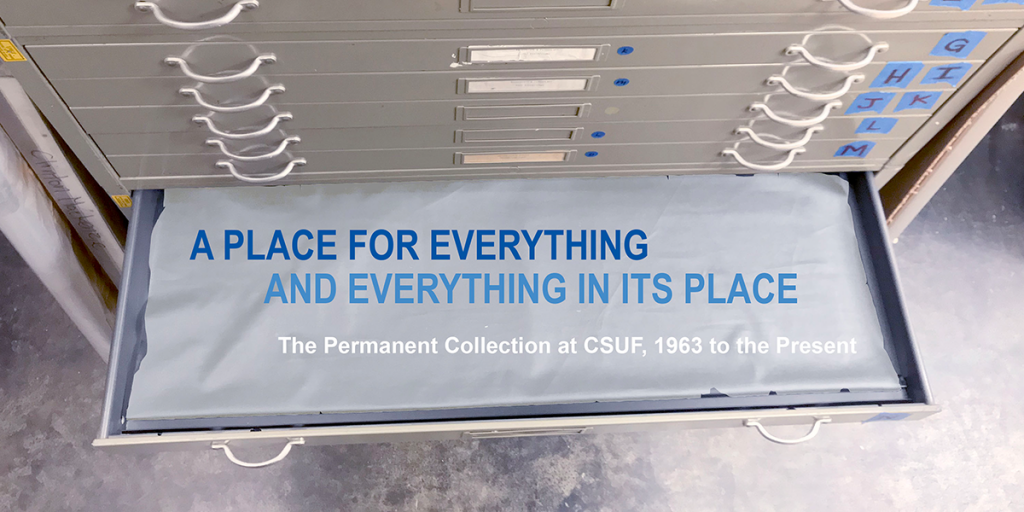 There will be a public opening reception Saturday, September 7, from 3-5pm.

G. Ray Kerciu (Art Professor, 1963-2002) started the collection by purchasing prints to develop a Study Collection that would serve as a resource for faculty, students, and the community. Kerciu’s association with the prominent print institutes, Gemini G.E.L. Workshop and Tamarind, lead to significant acquisitions of works produced by then-emerging artists such as Roy Lichenstein and Robert Rauschenberg.

The collection continued to expand with Jerry Samuelson (Art Professor 1962-1975 and College of the Arts Dean, 1975-2009), who assumed the role of gallery director shortly before the appointment of Dextra Frankel (Gallery Director 1967-1991). During Dextra’s tenure, art by Alexis Smith, Sam Francis, Ed Ruscha, and other notable artists were added to the collection. In 1992, Mike McGee took leadership of the gallery, as well as Frankel’s trailblazing Exhibition Design program. It was during his administration that the gallery became “The Nicholas & Lee Begovich Gallery” (2009) named after the two donors who were longtime arts supporters in Orange County. McGee’s tenure (1992-2018) brought significant bodies of work that reflected on the pulse of the contemporary art scene in the region and beyond. Tony Delap, Manuel Pardo, John Paul Jones, Daniel Wheeler, were among the many artists whose works were added into the collection during his term.

Continuing this legacy, Jennifer Frias who began her new role in July 2019 as the Gallery’s Director, plans to expand the breadth of the collection by reflecting on relevance and diversity. Recently acquired under her leadership, are works by Vietnamese-American painter, Ann Phong, who has an active arts practice, nationally and internationally. Furthermore, Frias intends to make the permanent collection accessible for research to the University and its surrounding communities– embracing Kerciu’s original vision.

The growth of the permanent collection is made possible by numerous private collectors, artists, and philanthropic groups dedicated to supporting the Visual Arts at CSUF, including The Art Alliance, Michael Childers, Mrs. Mary Conley Downe,

A Place For Everything, And Everything In Its Place is organized by College of the Arts Begovich Gallery. Support for the gallery is made possible through the Art Alliance, Associated Students, Inc. Instructional Related Activities, the College of the Arts, and Department of Visual Arts.