“For way too long, the politicians and the people in power have gotten away with not doing anything to fight the climate crisis, but we will make sure that they will not get away with it any longer. We are striking because we have done our homework and they have not.”

It began with one person. In 2018, a 15-year old Swedish girl with a type of autism named Greta Thunberg began skipping school and standing outside the Swedish Parliament holding a sign which read, “School Strike for the Climate.”

She was not loud or boisterous. In fact, she was kind of shy. But she was persistent, and she was outraged by the inaction of adults to make meaningful change regarding our civilization’s voracious carbon emissions and its devastating impact on the earth. Eventually, people started to take notice.

About a year later, Thunberg’s one-person strike has grown into millions. On September 20, over 4 million people (mainly young people) participated in climate strikes all over the world, urging action by politicians and large businesses to deal with the existential threat of human-caused climate change (a reality accepted by the vast majority of climate scientists). In a recent interview with Amy Goodman of Democracy Now, Thunberg called her autism her “superpower.”

Residents of number of cities in Orange County organized and participated in the September 20 Climate Strike, including Brea, Anaheim, Irvine, and Laguna Beach.

One such climate strike gathered on the steps of Anaheim City Hall. It was organized by four local high school students: Amreen Kaur, Brianna Ong, Marla Garcia, and Miranda Garcia. 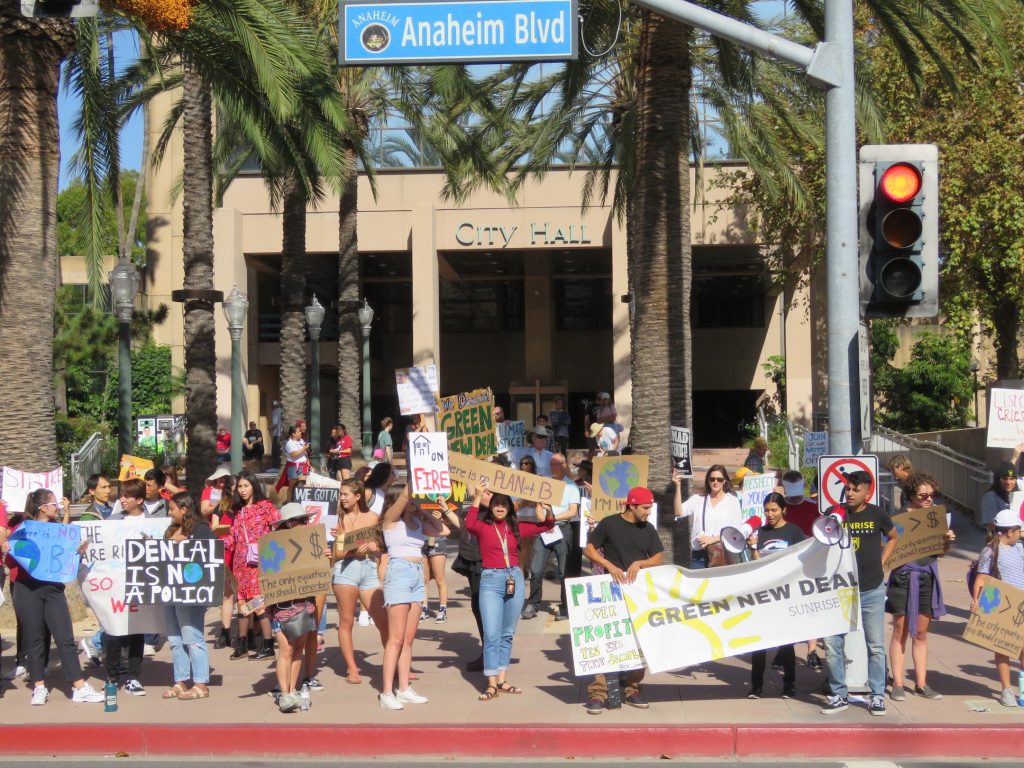 “We were all inspired by Greta Thunberg,” Marla Garcia said. “September 20 is a day where everybody around the world is striking, and we wanted to go to a strike, but we didn’t find any close to us, so we decided to make one ourselves.”

“Climate change is something that affects me. I sometimes wonder if I want to have children in this scenario because I don’t know if I want them to suffer the way that I struggle, knowing that politicians and everybody who’s above us can step on us, like they’re doing right now,” Miranda Garcia said. “I encourage you all to keep on doing this, to keep on fighting, for Anaheim and Orange County in general to declare a Climate Emergency.” 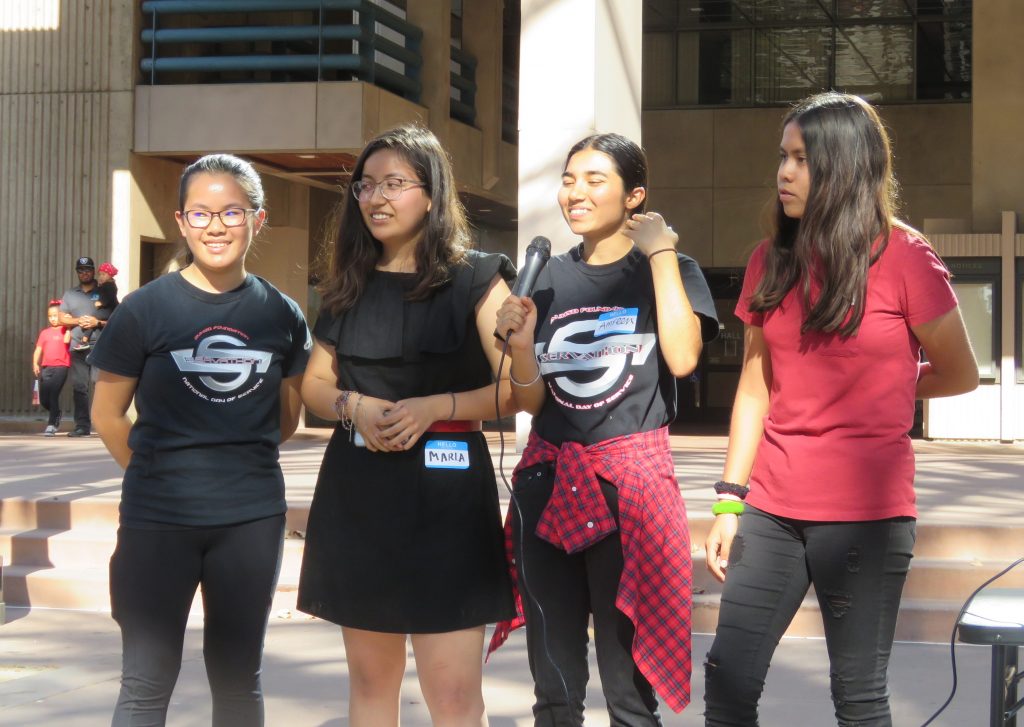 “Thank you for taking action today with the rest of the world,” Brandman said. “In 2015, we at the city of Anaheim, and with the school district, created a Greenhouse Reduction Plan with all of the local high schools…We must be fully renewable by 2030.”

“Why do I care about climate change?” she asked. “I can try to tell myself that it is okay. After all, there have been at least 5 or 6 mass extinctions on earth before, so what’s one more? But when we’re doing it ourselves out of stupidity and greed, then I find it impossible to accept…Our carbon output is actually accelerating rather than being reduced. This is like having your house catch on fire and, rather than getting out the old firehose and pouring some water on it, you say, ‘Look, I’ve got some lovely gasoline here. Let’s try that.’”

An Anaheim resident addresses the crowd of climate strikers.

“I’m personally striking because I’m very tired,” Marla Garcia said. “Basically, my entire life it’s something I’ve grown up with, and I’m tired of nothing being done about it for all 17 years of my life. So that’s why we’re doing this, because we want to see that change happen finally. I think we’re getting there.”

Here are some of the strikers and their homemade signs: 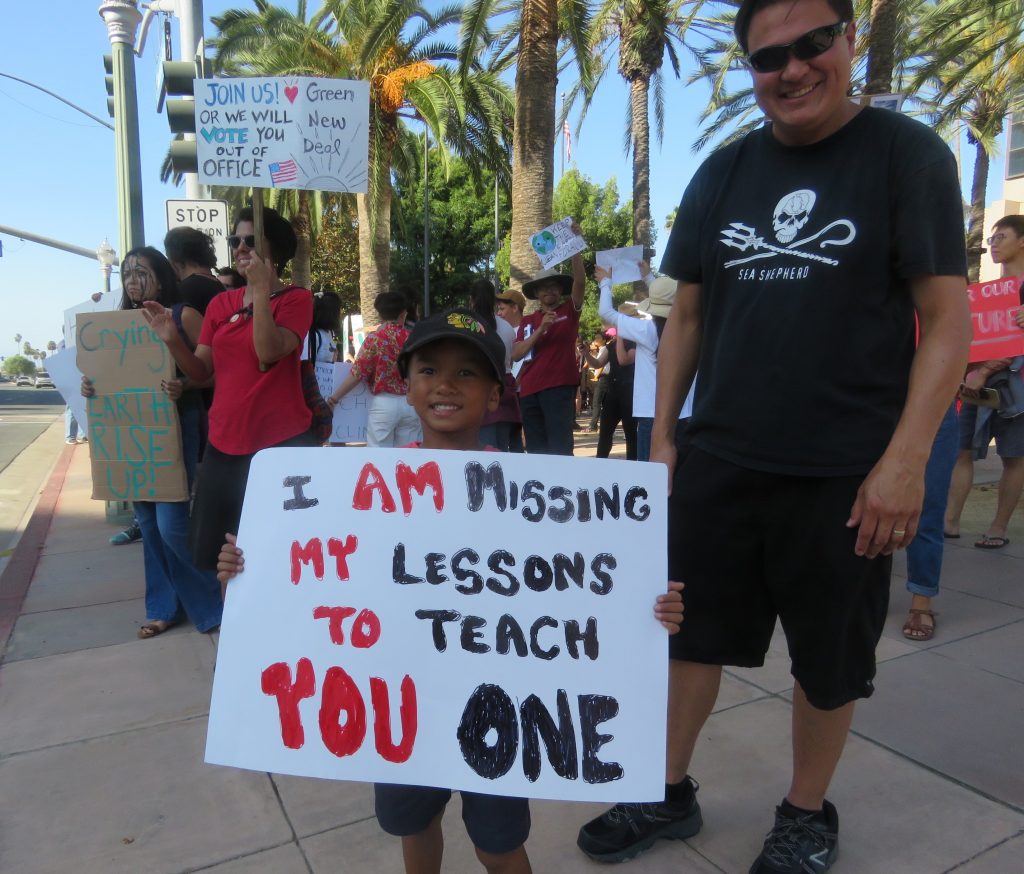 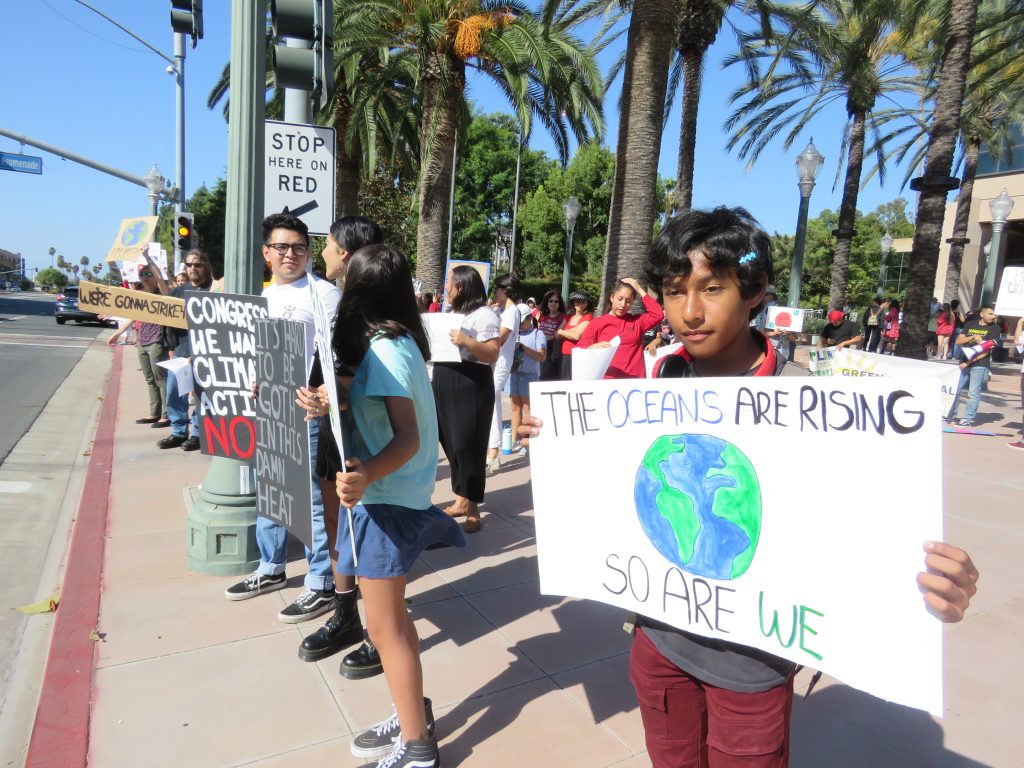 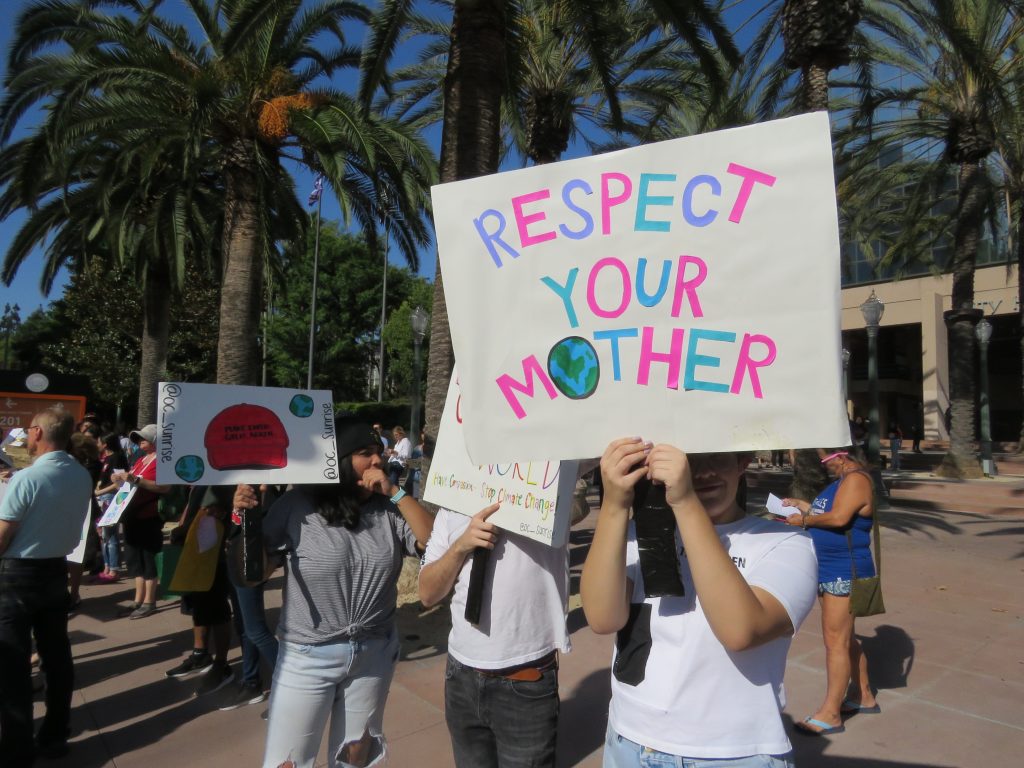 After speeches from organizers, the climate strikers marched along Anaheim Blvd, and up Center Street in downtown, chanting and holding their signs. 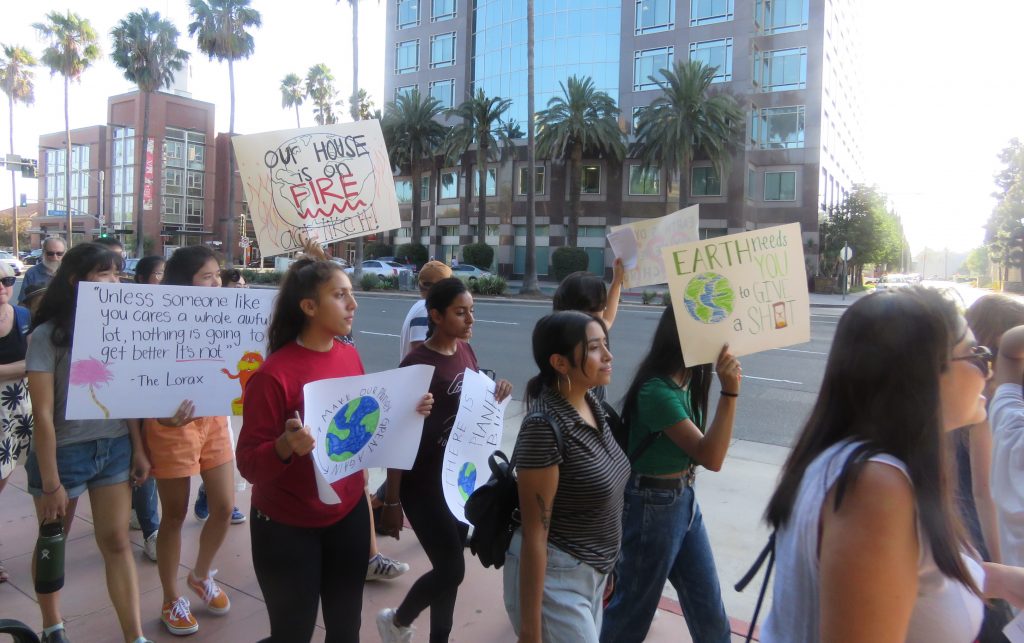 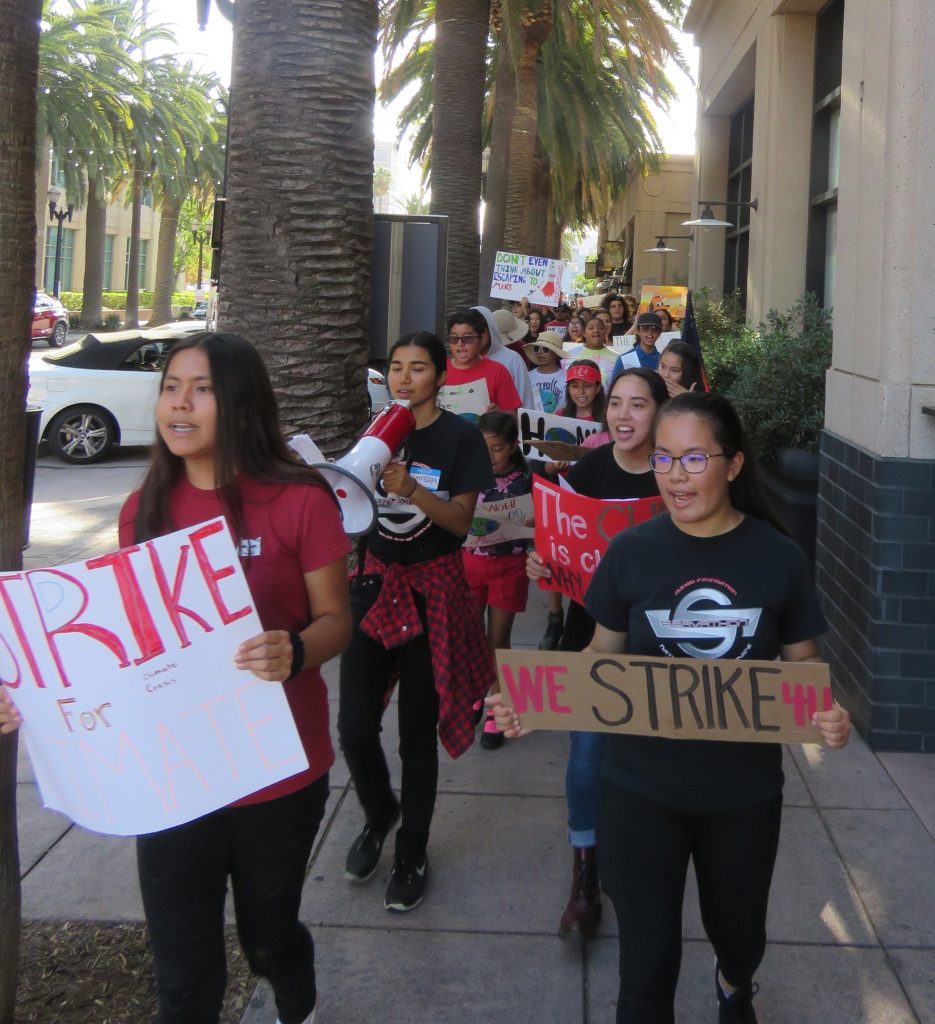 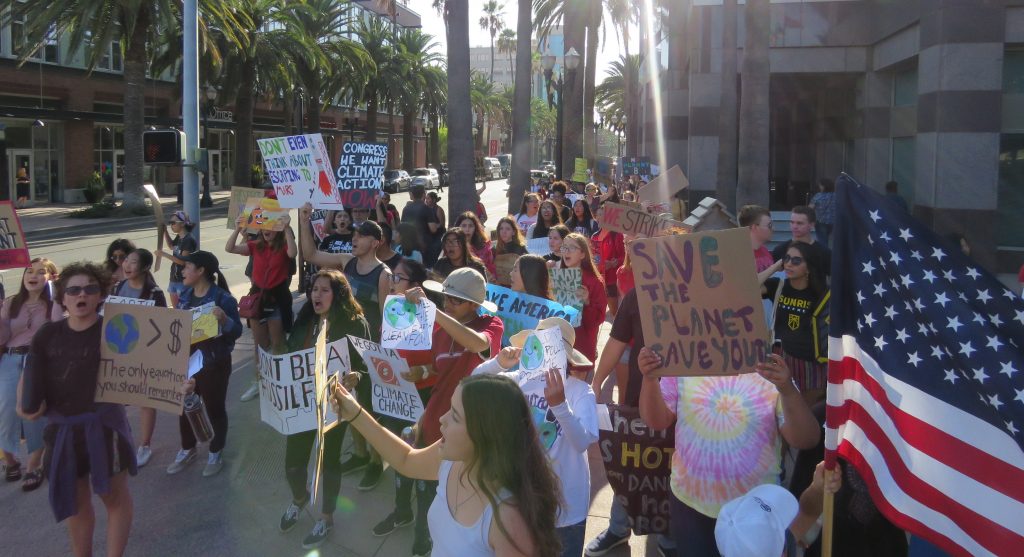 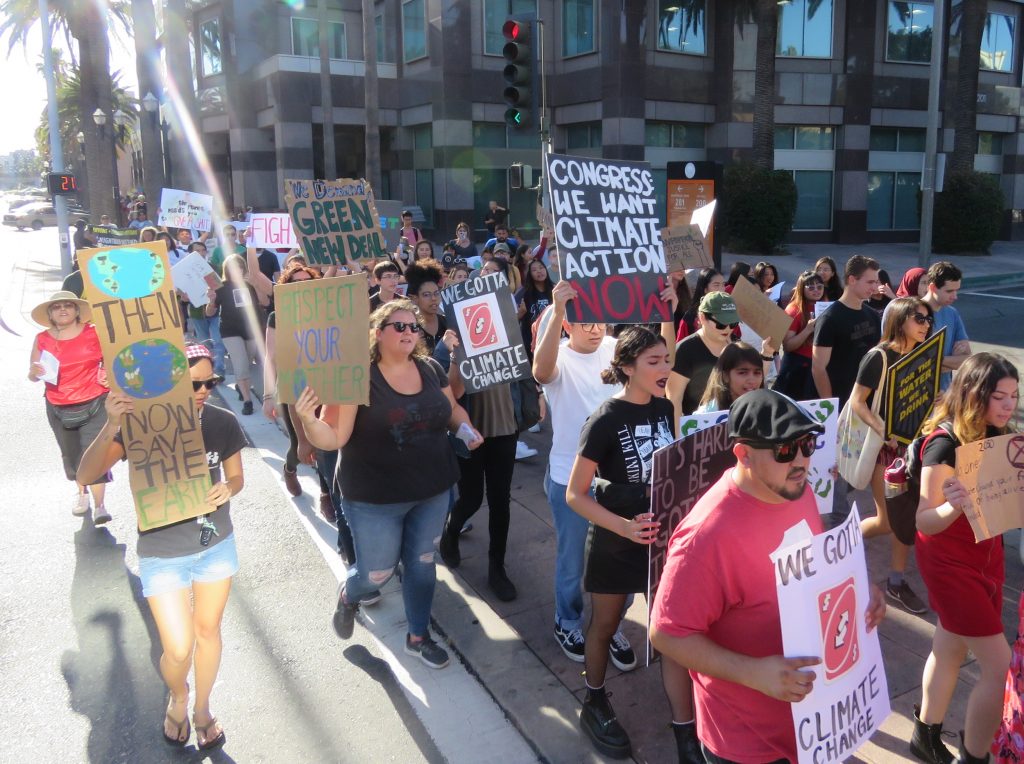 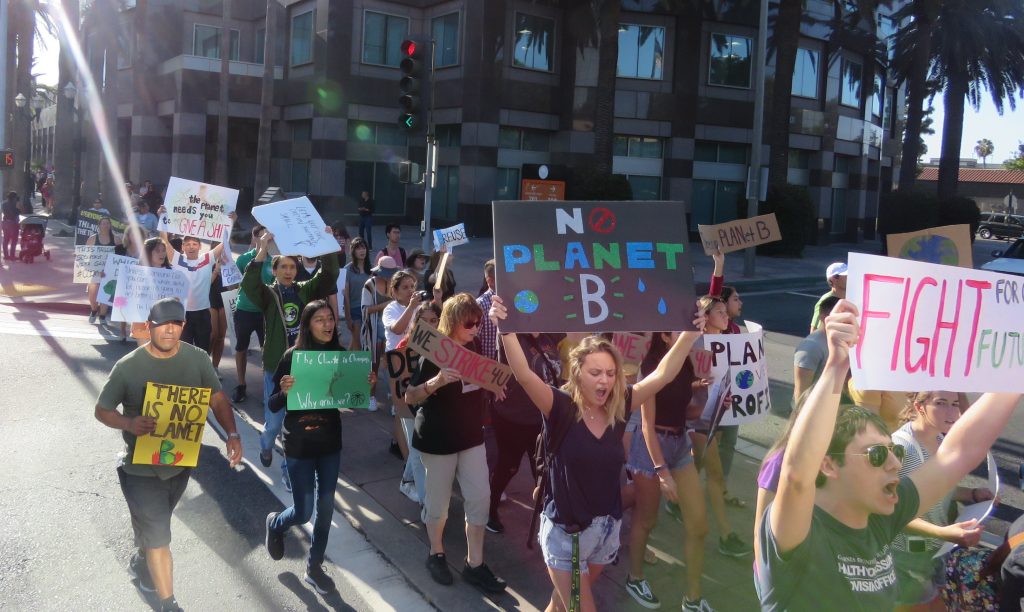 In addition to the Anaheim Climate Strike, there was also a strike at UCI. Here are some photos of that event taken by Orange County artist Chantal deFelice: 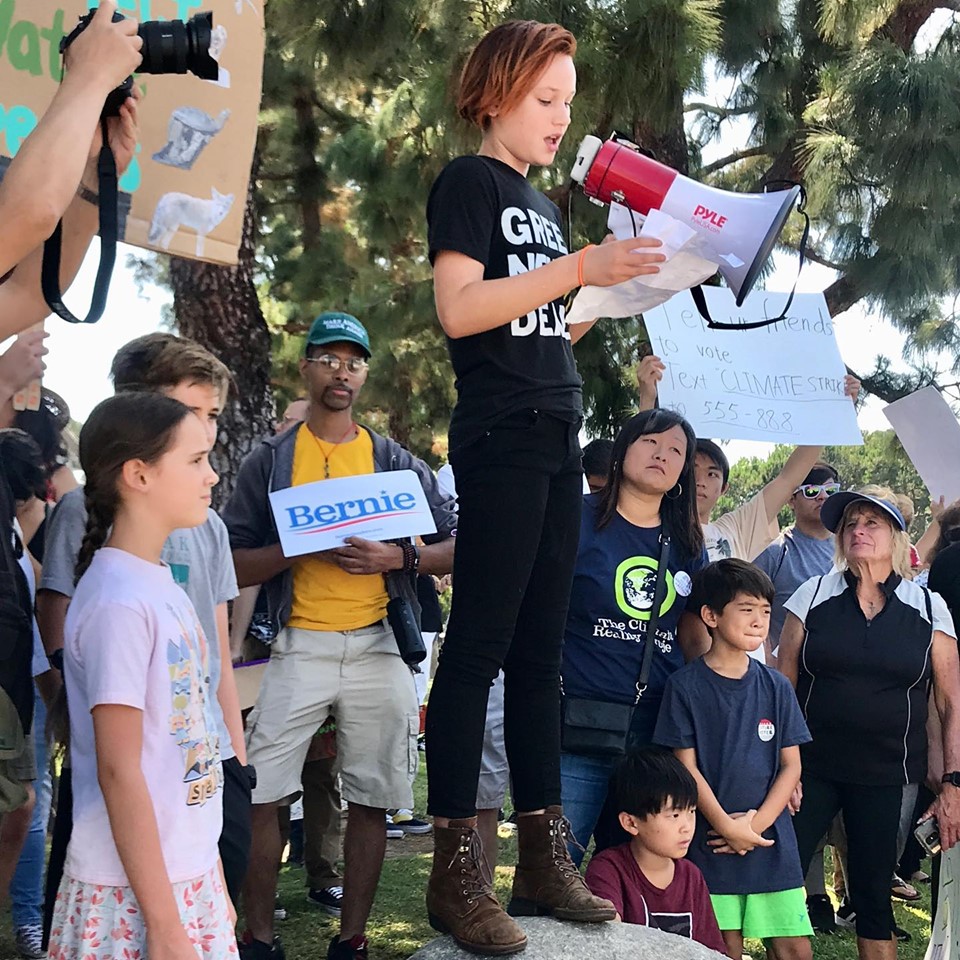 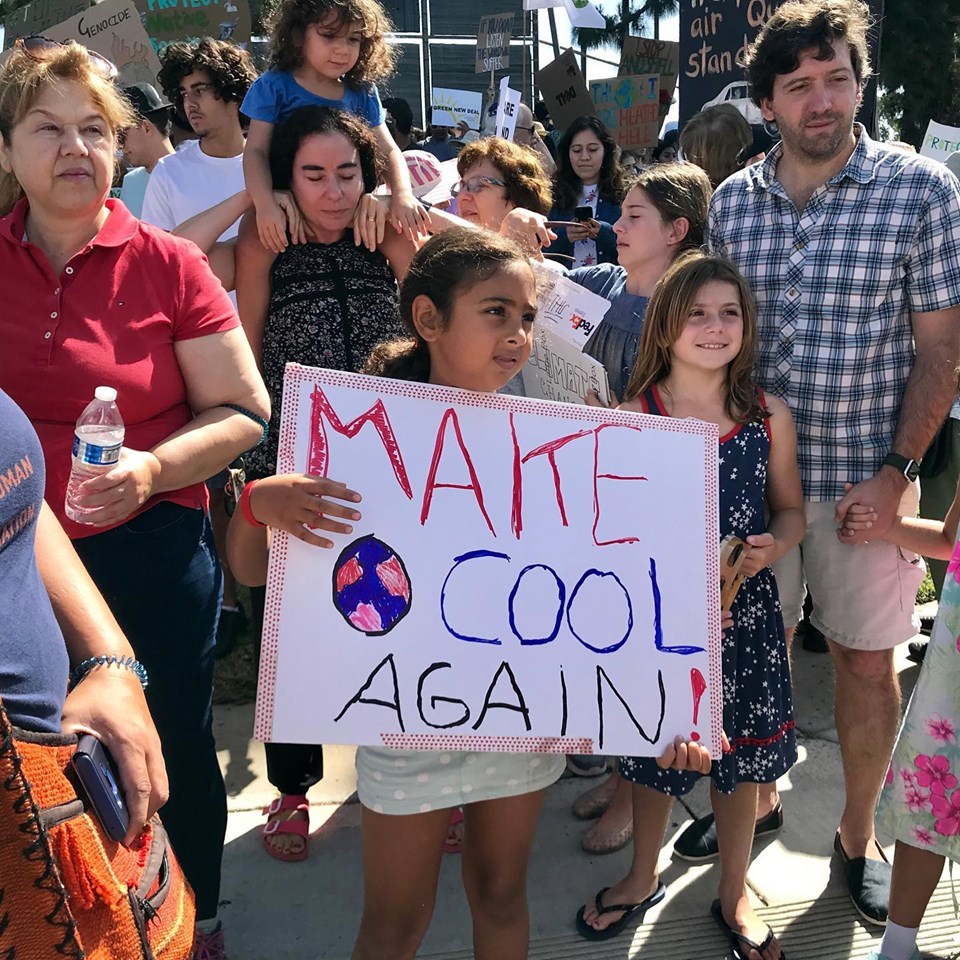 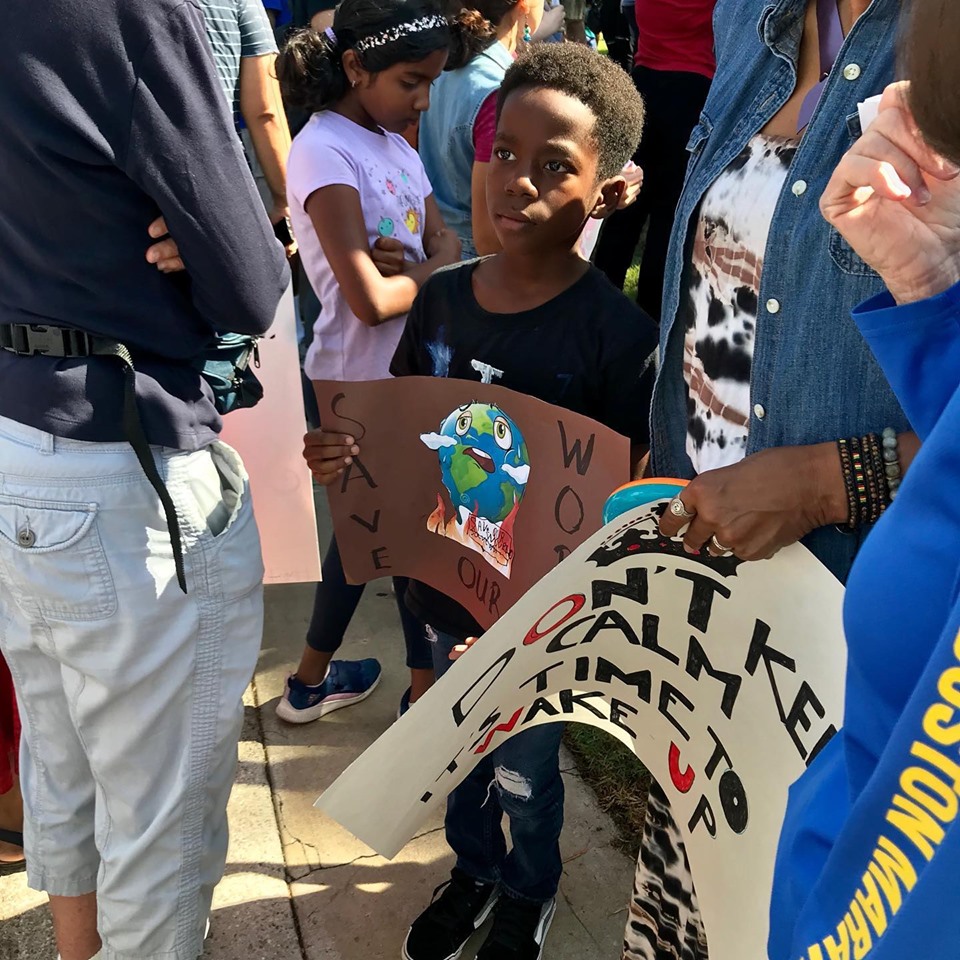 Closer to home, there was another climate strike and “Healthy Future Fair” in Brea hosted by local doctor Kris Potter Percy. Here are some photos from that event, taken by Percy: 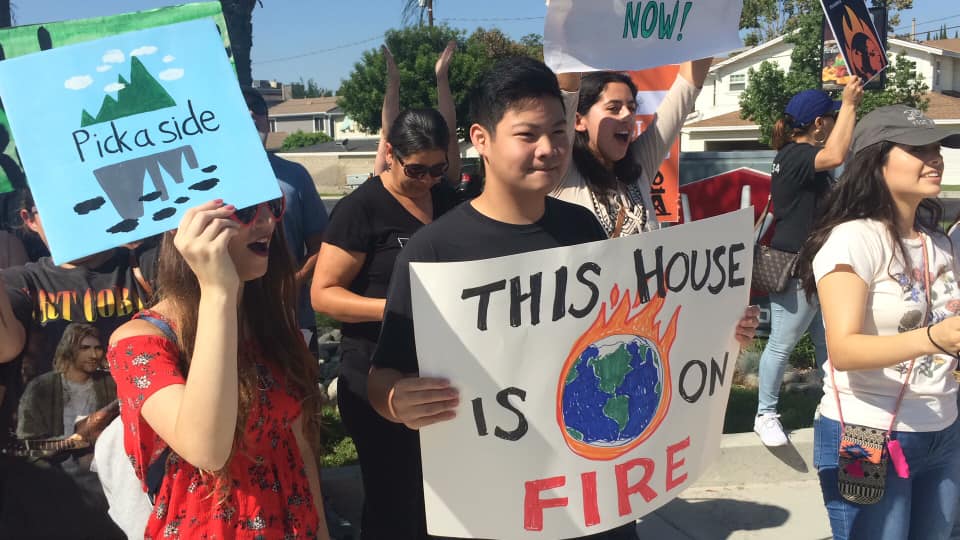 Global Temperature Rise: The planet’s average surface temperature has risen about 1.62 degrees Fahrenheit (0.9 degrees Celsius) since the late 19th century, a change driven largely by increased carbon dioxide and other human-made emissions into the atmosphere. Most of the warming occurred in the past 35 years, with the five warmest years on record taking place since 2010. Not only was 2016 the warmest year on record, but eight of the 12 months that make up the year — from January through September, with the exception of June — were the warmest on record for those respective months.

Warming Oceans: The oceans have absorbed much of this increased heat, with the top 700 meters (about 2,300 feet) of ocean showing warming of more than 0.4 degrees Fahrenheit since 1969.

Shrinking Ice Sheets: The Greenland and Antarctic ice sheets have decreased in mass. Data from NASA’s Gravity Recovery and Climate Experiment show Greenland lost an average of 286 billion tons of ice per year between 1993 and 2016, while Antarctica lost about 127 billion tons of ice per year during the same time period. The rate of Antarctica ice mass loss has tripled in the last decade.

Glacial Retreat: Glaciers are retreating almost everywhere around the world — including in the Alps, Himalayas, Andes, Rockies, Alaska and Africa.

Decreased Snow Cover: Satellite observations reveal that the amount of spring snow cover in the Northern Hemisphere has decreased over the past five decades and that the snow is melting earlier.

Declining Arctic Sea Ice: Both the extent and thickness of Arctic sea ice has declined rapidly over the last several decades.

Ocean Acidification: Since the beginning of the Industrial Revolution, the acidity of surface ocean waters has increased by about 30 percent.13,14 This increase is the result of humans emitting more carbon dioxide into the atmosphere and hence more being absorbed into the oceans. The amount of carbon dioxide absorbed by the upper layer of the oceans is increasing by about 2 billion tons per year.

Visit climate.nasa.gov for more information, articles, and up to the minute data.