A California Appeals Court has halted the City of Fullerton’s restraining order against the Friends for Fullerton’s Future (FFFF) blog, which had previously prevented the blog from disseminating materials which the blog had allegedly illegally obtained from the city’s Dropbox folder.

On October 24 the City of Fullerton filed a lawsuit against the FFFF Blog and some of its authors for allegedly illegally downloading confidential files from a city Dropbox folder and posting these files on their blog.

The day after the city filed its request, Orange County Superior Court Judge Thomas Delaney ordered Ferguson and the FFFF blog to stop publishing confidential city documents. The restraining order also prohibited passing the documents to anyone else or deleting them.

On October 31, the FFFF blog and its authors appealed this decision, and on November 7 the appeals court sided with them, ordering a stay of the Oct 25 court order “pending further order of this court.”

A preliminary injunction hearing has been scheduled on November 21 for this case and an anti-strategic lawsuit against public participation (SLAPP) motion filed by FFFF attorney Aviles against Fullerton will be heard the same day.

The appeals court also accepted an amicus brief in support of the FFFF blog by the Reporter’s Committee for Freedom of the Press, which argues that the city’s lawsuit is both unfounded and is a potential threat to First Amendment rights. 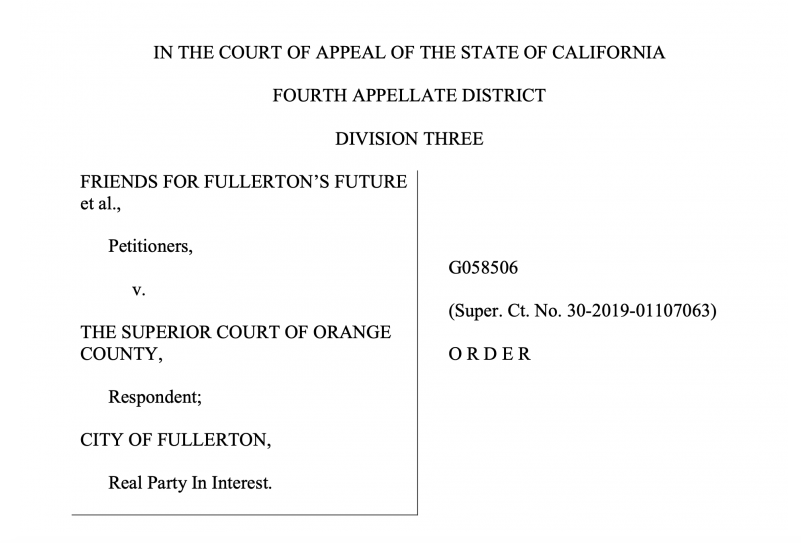