Remembering Nixonland: How the Modern Republican Party Was Born in Orange County

In the 2018 midterm election, something happened which would have been unthinkable just a couple decades earlier: all of Orange County’s congressional seats went to Democrats.

While this might not have been surprising for younger voters who came of age in the increasingly diverse region that is Orange County, for older voters the 2018 midterm was downright historic.

This is because, in the second half of the 20th century, Orange County was a very conservative place—home to Richard Nixon and the right-wing John Birch Society—a place known nationally as a hotbed of ultraconservative beliefs and politicians.

This strange history would be of interest only to local folks were it not for the fact that it was here, in sunny OC, that the Republican Party began its rightward shift from the moderate Republicanism of Dwight Eisenhower to the ultimate victory and takeover of a far more conservative variety—a trend that has run its course locally, but has gone national.

In her book Suburban Warriors: The Origins of the New American Right, Harvard historian Lisa McGirr chronicles this important piece of local (and ultimately national) history. Her book offers profound insights worth pondering in these volatile times.

“This book is a history of the conservative movement, using Orange County as the lens through which to explore the social base and ideological waters of one of the most profound transformations of 20th century U.S. politics,” McGirr writes.

Right-wing politics were not actually new to Orange County. In the 1920s, there was an active Ku Klux Klan in Anaheim, Fullerton, La Habra, and Brea.

The local rancher elites who pretty much ran things for the first half of the 20th century were, by and large, a conservative bunch.

Back when OC was largely agricultural, “The Associated Farmers of California and the California Farm Bureau, dominated by Southern California membership, allied with reactionary and conservative Republican Party politicians and fostered a staunch conservative ethos,” especially when it came to government regulations and labor issues.

In 1946, Orange Countian Richard Nixon (from Yorba Linda) was elected to congress on a strong “anti-communist” platform. Nixon rose to national prominence during the McCarthy “Red Scare” era as an unabashed Red-Baiter. This would presage things to come. 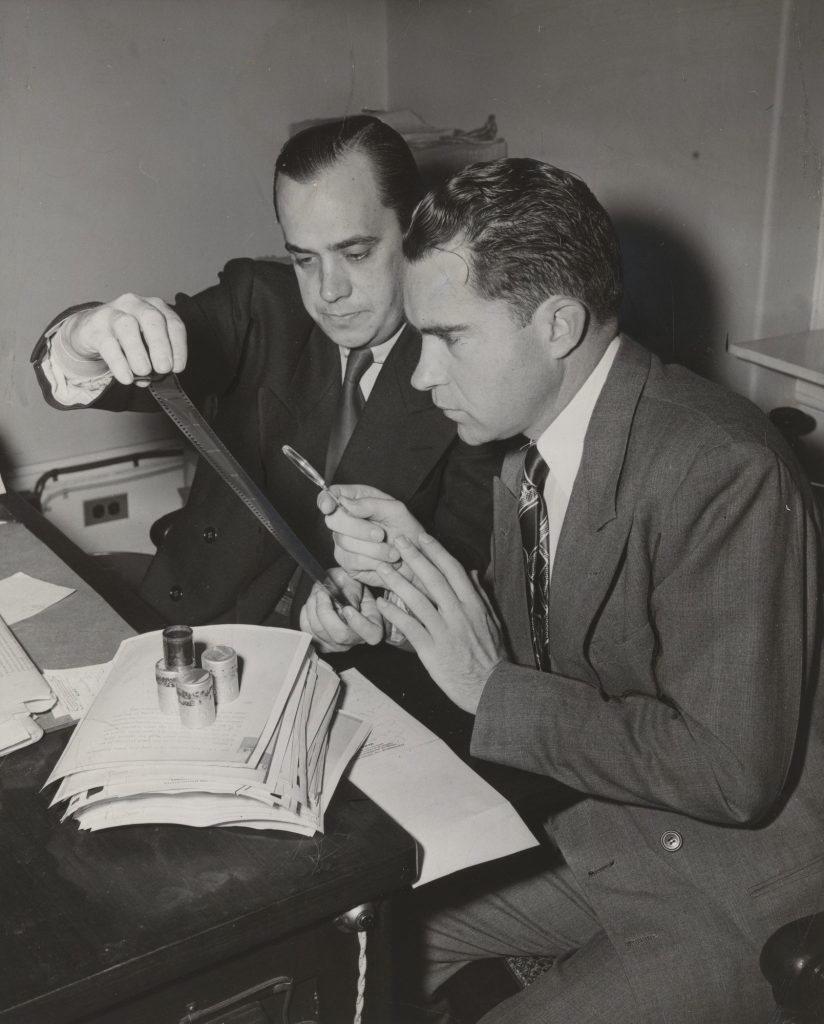 How the Cold War Transformed the Local Landscape

It’s difficult to overestimate the impact that the Cold War, and its close cousin the military industrial complex, had on the landscape and politics of Orange County.

By 1950, the U.S. military had a large presence in Orange County, as evidenced by the Santa Ana Army Air Base, a Naval Ammunition Depot at Seal Beach, the US Naval Air Station in Los Alamitos, and the El Toro Marine Corps Air Station.

“The military was thoroughly entrenched by 1950, and the bases provided one of the county’s main sources of income. Thousands of military personnel moved to the area, sparking a boom in housing development,” McGirr writes.

A close auxiliary of the new post-war military presence was the rapid growth of defense industries in the southland, including Orange County. By 1962, 31,000 county residents worked in various defense industry jobs at places like Hughes Aircraft  in Fullerton, Autonetics in Anaheim, Ford Aeronautics in Newport, and Nortronics in Anaheim. 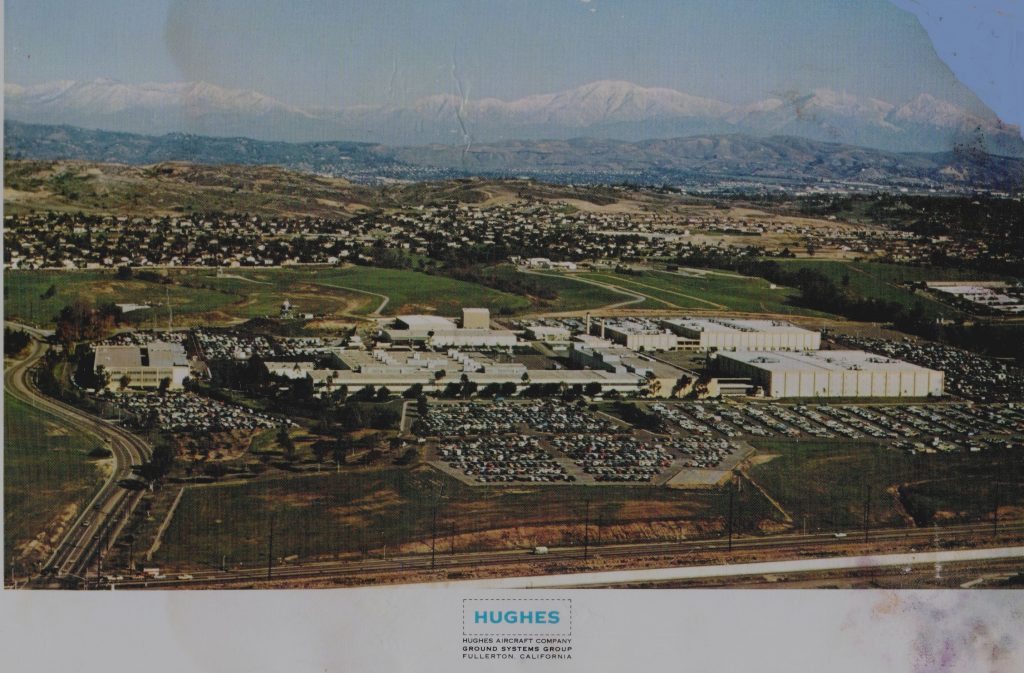 The very backbone of the local economy was shifting from agriculture to military and defense industries, fueled by an ever-escalating Cold War arms race.

The strong military/defense presence in the county fostered a strong conservative ethos, and a particularly vocal “anti-communism.”

The great irony at the heart of this emerging conservative political consensus was that, while many railed against “big government” interference in their lives, the fact is that the region’s booming economy was a product of federal government spending—military and defense contracts. Conservative Orange Countians did not see this contradiction as problematic.

Anti-Communism on the Map!

In 1961, conservative businessman Walter Knott (founder of Knott’s Berry Farm), sponsored a massive School of Anti-Communism at La Palma Park in Anaheim that drew over 7,000 students.

This was just one of numerous anti-communist groups that sprang up in OC in the early 1960s, such as Californians’ Committee to Combat Communism and the John Birch Society (JBS). 38 chapters of the JBS were formed in OC, with an estimated membership of about 5,000. 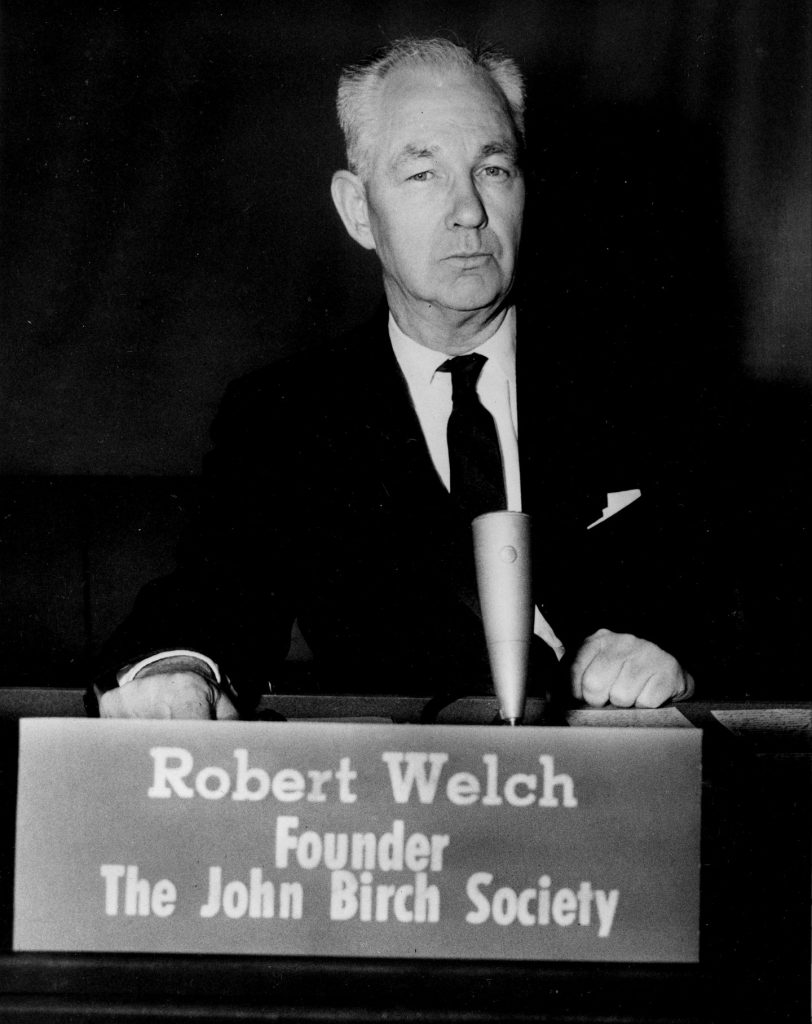 One local event that sparked a good deal of conservative mobilization was the successful attempt to recall Anaheim School Board trustee Joel Dvorman in 1960. His crime? Hosting a meeting of the American Civil Liberties Union (ACLU).

In local schools and churches, conservative groups would show anti-Communist films like “Communism on the Map” and “Operation Abolition,” and distribute anti-communist literature in “Freedom Forum” book stores.

With the election of John F. Kennedy, a liberal Democrat, in 1960 and the rise of the Civil Rights movement some Orange Countians saw a threat to their vision of the American way of life.

Rufus Pearce, an aerospace engineer who co-founded the Fullerton chapter of the JBS, said, “All these things really indicated to us that there was something rotten in the US government.”

For military and aerospace workers like Pearce, their very livelihood was directly tied to the Cold War.

“Bridge clubs, coffee klatches, and barbecues—all popular in the new suburban communities—provided some of the opportunities for right-wing ideas to spread literally from home to home throughout the county,” McGirr writes.

Among the supporters of the local John Birch Society was the prominent Muckenthaler family.

Goldwater signaled a shift away from the moderate Republicanism of Dwight Eisenhower and (definitely) from the liberalism of John F. Kennedy.

Goldwater’s opposition to Civil Rights legislation, his advocacy of states’ rights and strong anti-communism resonated with many Orange Countians.

According to McGirr, his “support of property rights over civil rights as the ultimate test of freedom resounded among white middle class property holders in a state whose Democrats had recently passed fair housing legislation.”

Also on the California ballot in 1964 was Prop 14, an initiative to overturn the recently-passed Rumford Fair Housing Act, which prevented the sort of housing discrimination that was widespread in California at the time. In fact, it was things like racially restrictive housing covenants that had kept Orange County relatively racially homogenous up to this point.

“The epicenter of Southern California conservatism—Orange County—took the lead in mobilizing the groundswell for Goldwater in 1964,” McGirr writes. “The region from Fullerton to Laguna Beach, Yorba Linda to Irvine was Goldwater country.”

If it had been up to Orange County, Barry Goldwater would have been elected president in 1964. As it turned out, his brand of ultra-conservatism didn’t resound as strongly with the nation as a whole. Goldwater was roundly defeated by Lyndon Johnson.

It would take an aging California actor named Ronald Reagan to soften the hard edges of right wing ideology and bring them to state and national prominence in the years to come. 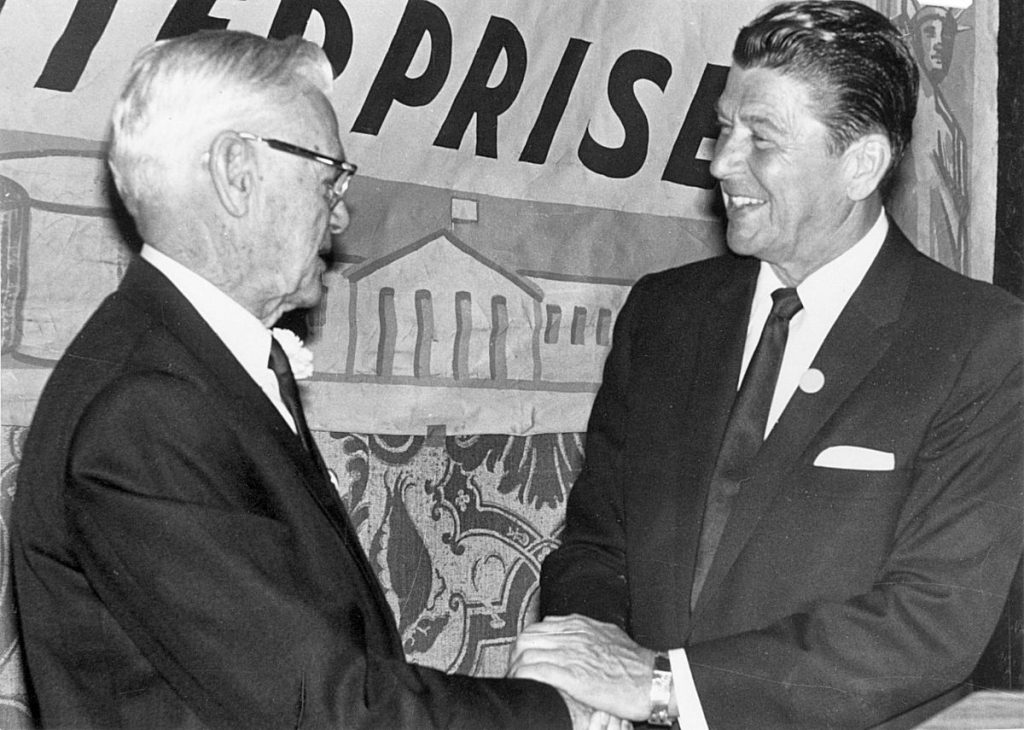 The Rise of Reagan and Nixon

Also, both were elected at a time when the Democratic Party was being ripped apart from within by the division between moderate/conservative Democrats and the growing New Left, as demonstrated by student protests and civil rights activism.

Stuart Spencer, a campaign manager for Reagan in 1966, said, “It was the first time we came up with the category of ‘white conservative Democrats’…we really went after them.”

In the volatile social climate of the 1960s, concerns over “law and order” pushed some Democrats into the Republican ranks.

There was also the impact of the Orange County Register, which throughout these years was run by staunch conservative/libertarian Raymond Hoiles—this was the main news outlet for many Orange Countians, which also fostered a conservative ethos. 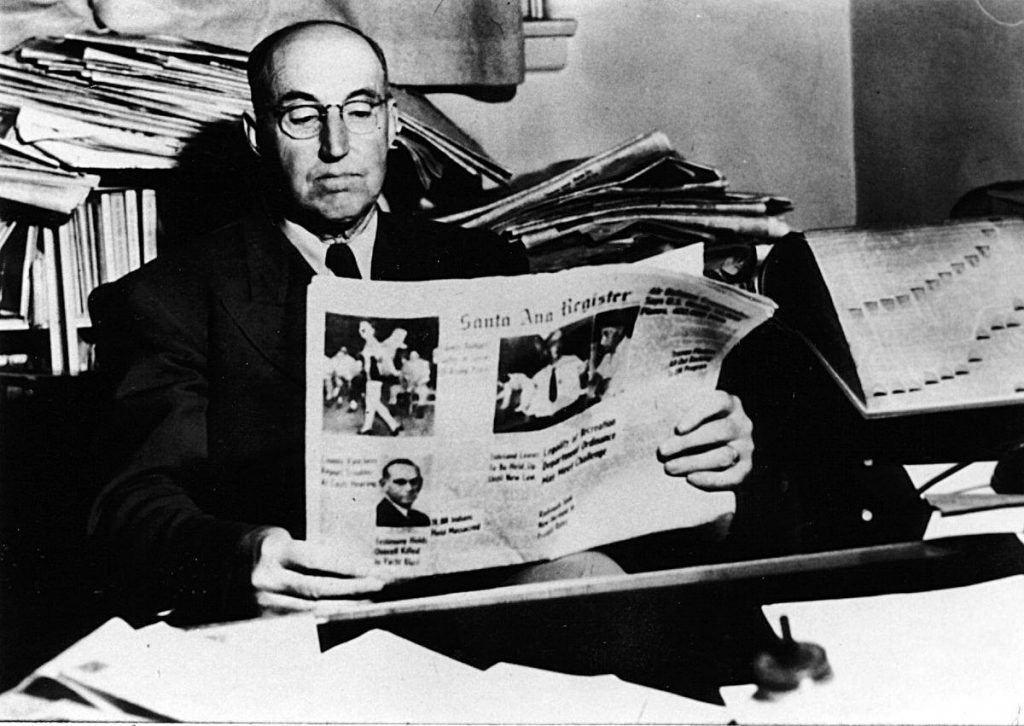 Another factor that contributed to the conservatism of Orange County was the rise of evangelicalism and “mega-churches.”

One reason for the success of these large churches, according to McGirr, was the unique built environment that rapidly emerged in OC after WWII.

“County officials largely left the control of development in private hands,” McGirr writes. “This resulted in a built environment that reinforced privacy, individual property rights, home ownership, and isolation at the expense of public spaces and town centers that could have created a sense of public and community responsibility.”

Searching for community in the socially isolating suburban sprawl, many Orange Countians found this in the large churches that began to grew in the area: “In a privatized, physically isolated landscape, among people who had only recently arrived in their new communities, conservative churches offered a sense of stability and a space for intensive social interaction,” McGirr writes. 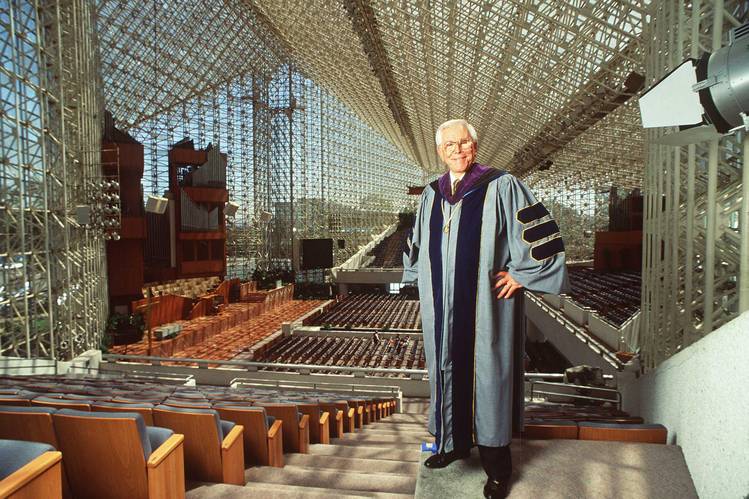 Robert Schuller in the Crystal Cathedral.

It was in churches like these that a new constituency began to emerge—evangelicals—who tended to focus on single issue campaigns, like Fullerton State Senator John Briggs, who championed a 1978 proposition that would have allowed public school to fire teachers who were gay.

In the 1970s and 1980s, abortion and gay rights allowed for a marriage of religion and politics that would forge the evangelical movement that remains strong today.

The Reverend Louis Sheldon of Anaheim founded the Traditional Values Coalition, “which went on to become a prominent national organization in the Christian Right’s crusade against gay rights, claiming some 31,000 churches as members.”

The conservative strain of Christianity that grew in Orange County was also a pioneer of what may be called the “prosperity” gospel—the notion that wealth is a sign of God’s favor. As Robert Schuller put it, “You have a God-ordained right to be wealthy. You are a steward of the goods, the golds, the gifts that God has allowed to come into your hands. Having riches is no sin, wealth is no crime. Christ did not praise poverty. The profit motive is not necessarily unChristian.”

This gospel of comforting the comfortable proved very popular locally and nationally, as Schuller’s TV show “The Hour of Power” reached millions weekly.

“Orange County was home to some of the most important ‘megachurches,’ prophecy thinkers, and televangelists of the day. By the 1990s, the Southern California region had the highest concentration of megachurches—large mostly conservative theological churches—in the nation,” McGirr writes.

Conservative politics in Orange County did not just spring up by accident or for no reason. A complex interplay of forces—the Cold War, the military, defense industries, a decentralized built environment, megachurches, and a conservative press—all factored in to make the OC a conservative place.

With the election of Ronald Reagan to the presidency in 1980, the conservative movement had found its champion and standard bearer in the highest office of the land.