As I drive down Rosecrans on my daily commute to Whittier College, I sometimes spot a trail in between the trees, just past the baseball field across from Ralph B. Clark Regional Park. I was curious as to where this trail led, so I decided to check it out on a sunny Saturday afternoon in January. While Fullerton is rich with approximately twenty-eight miles of recreational trails spread throughout the city, this two-mile stretch of trails off Rosecrans is one of the lesser known, even though it offers a spectacular 360-degree panoramic view of Orange County.

The best place to park is the lot across the street from Ralph B. Clark Regional Park. Unfortunately, it is only open when there are teams using the fields and renting the facilities. The next best place to park is along the opposite side of Rosecrans, on the same side of the street as the regional park. Parking at the baseball field lot, I walked down the sidewalk bordering the street until I reached a trail opening with two wooden guard rails on either side of a wide dirt path, surrounded by trees and brush on either side.

According to the Fullerton Walks website, “this trail is most famous for its width, and guide rails.” The wooden railings guided me up a small hill and around the far side of the baseball field. The trail continued winding up another hill, where I spotted a pair of Prickly Pear cactus placed on the side of the path. Looking behind me as I hiked, I found a spectacular view of the cityscape. 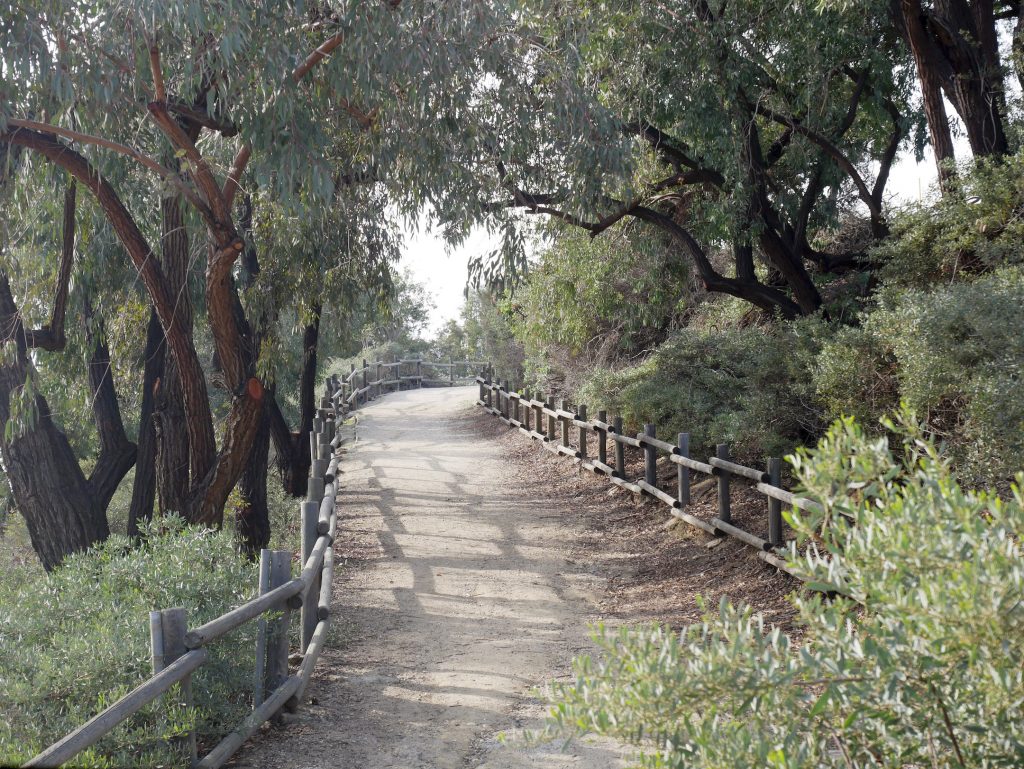 As I rounded a corner that turned away from Rosecrans, I could see the muted tones of the Coyote Hills cliffs way in the distance with homes in front of them. I continued up the path and around a large open area, where I spotted a green “Habitat Conservation Area” sign, warning hikers to stay on the path, and protect the sensitive plants and wildlife. From this vantage point, I could tell that this was going to be a very hilly trail.

About a third of a mile from where I started, the trail started making its way back downhill and crossed Muir Trail Drive, a street that runs through a rather expensive and large community known as Hawks Pointe. North of Muir Trail Drive, the trail changed its name from Hawks Pointe to Muir Trail, which crossed the street and continued to wind its way up the hillside above the homes. The wooden railings were switched out for white plastic railings on the sides. This section of the path also had three rest areas with large boulders to sit on. Each rest stop had a fantastic view. If I had visited on a clearer day, I might’ve been able to see the snow capped mountains in the distance. Similar to the Vista Park and Panorama Nature Preserve near the Summit House, I was able to get a good view in all directions. In fact, even though it was a bit smoggy, I was still able to see out past the towering rollercoaster rides of Knott’s Berry Farm. 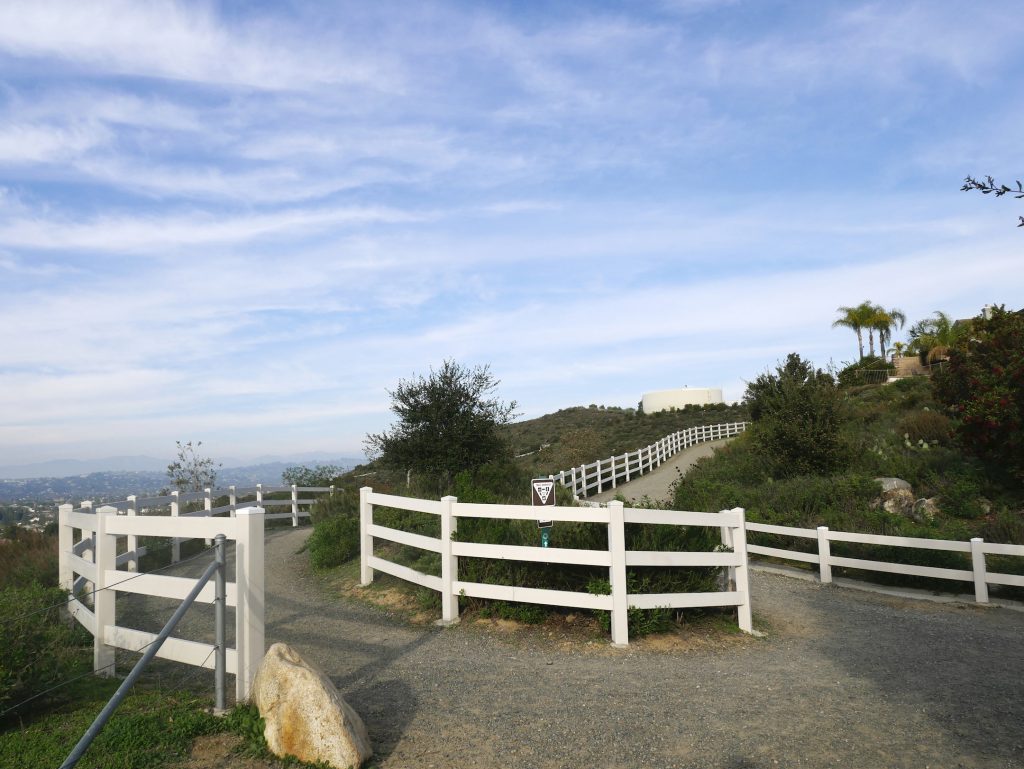 The first rest area happened to fall at a fork in the trail. One side went straight to a water tank on an even higher hill and the other went left and down, leading to a small loop that followed the Hawks Point neighborhood and eventually ended up in a small park. At all three of the rest areas, there were trash cans and trees for shade on warmer days.

After taking a nice long drink of water, I decided to head toward the water tower. Be sure to bring water with you if you plan on hiking this route because while it’s easy to get plenty of exercise climbing these hills, your body still needs to stay hydrated. Near the highest point, I stopped to catch my breath and take another drink. Looking out, I couldn’t help but admire the subtle beauty of the Coyote Hills landscape. From such a high location, I could see all of Orange County. To the north is a view of the La Habra hills and the mountains beyond. To the east, you can see Brea, Placentia and Yorba Linda. On a clear day, you can even see as far as Los Angeles. To the south, the view includes Anaheim, Orange, Tustin, and beyond. 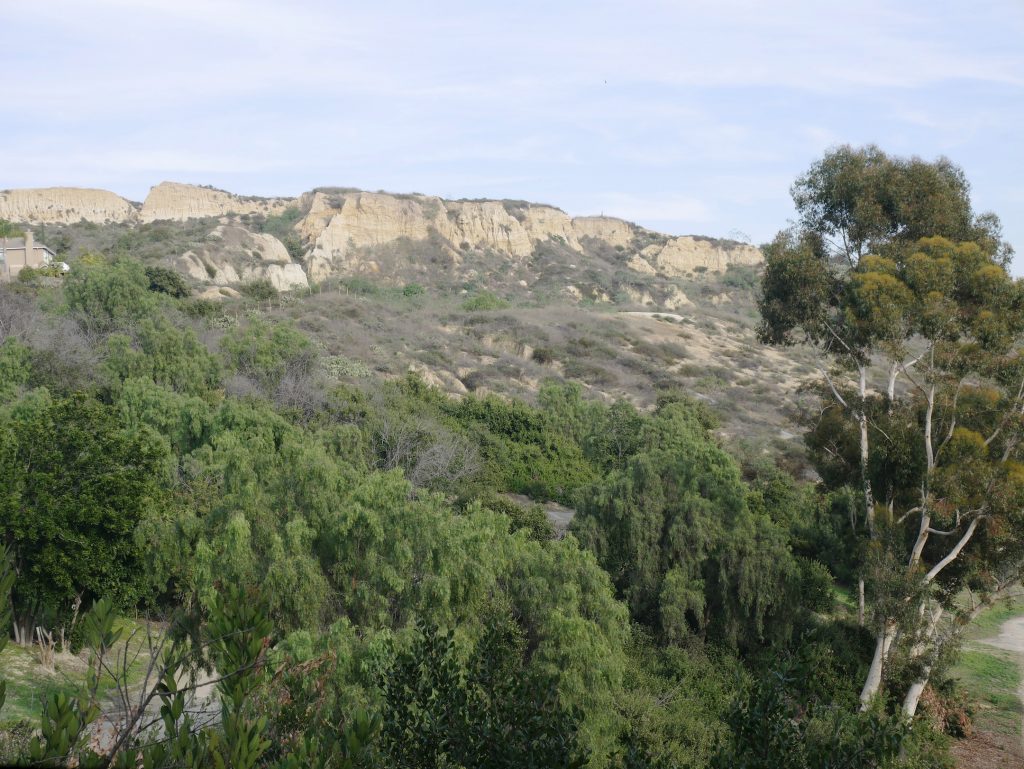 I spotted more drought-resistant plants along the sides of the path as I made my way up to the water tank, which looked like something out of a 1950’s science-fiction movie. This is a part of eleven tanks within the Fullerton Water Department. It was surrounded by a barbed wire fence and a metal shack that appeared to be locked. A giant white sign on the fence read, “No Trespassing – Violators Will Be Arrested.” Remaining on the trail, I couldn’t help but notice a giant ladder ascending the tank.

The trail wound its way around the tank. Looking up, the tank was stark against the blue sky, which would’ve made for a great abstract photograph. The public path stopped at the last rest area. If you continued on, the trail would lead downhill to the not very dramatic end; a road named Laguna Street.

On my way back, I spotted a cotton-tailed brown rabbit that blended in with the dirt-covered environment. Occasionally, rare birds showed up like the coastal cactus wren and the California gnatcatcher. While this path is long, it is worth it for the view. In fact, I would go as far as to say that this path is even better than the one by the Summit House because, when I hiked the trail, it was less crowded and offered an even better viewing experience. This would be the perfect place to capture an establishing shot for a film and an ideal location for sunset or sunrise photos. 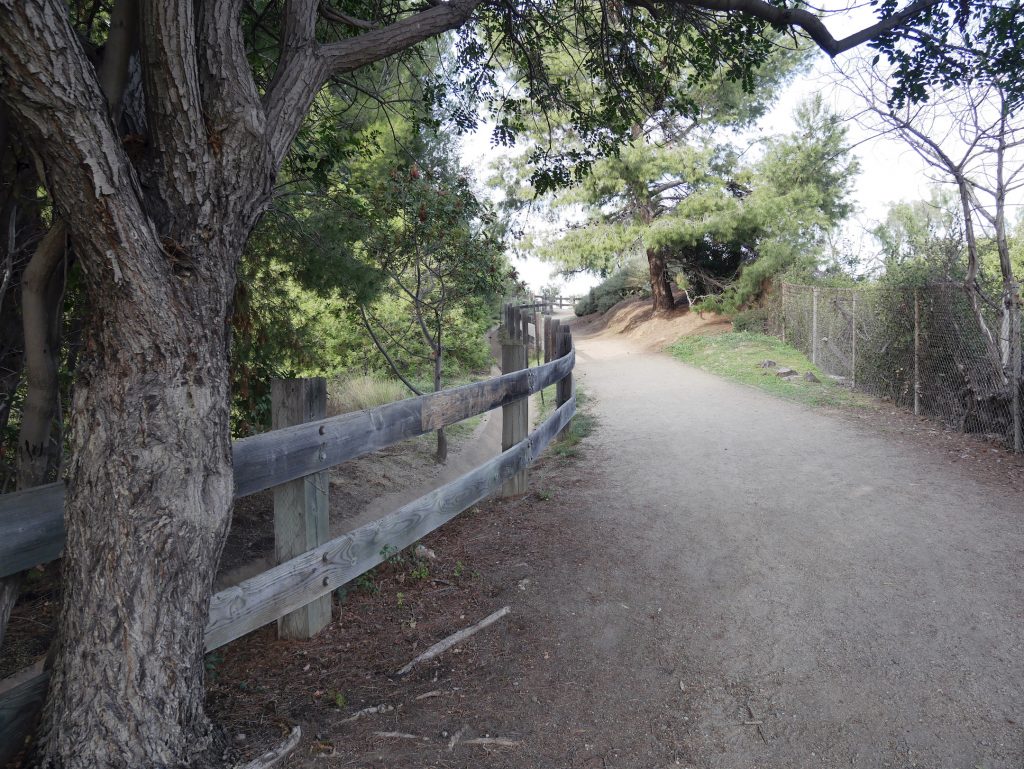 Access is allowed on the trail only from 4:00 a.m. to midnight. To see what the trails off Rosecrans currently look like, visit http://www.fullertonobserver.com and click the tab labeled “Local.” Underneath that tab, click on “Emerson Little YouTube Channel,” which will take you directly to my page.