On March 27 the Orange County Health Care Agency held a press conference to update the county’s three million residents about measures being taken to address the threat of the COVID-19 virus. Board of Supervisors Chair Michelle Steel opened the televised and Facebook live-streamed half hour press conference, also attended by appropriately distanced OCHCA Director of Public Services David Souleles, OC Health Care Agency officer Dr. Nichole Quick, and County Executive Officer Frank Kim, each of whom responded to questions posed by reporters via telephone or in person, off camera.

On the same day, the county website dedicated to information about the fast-spreading virus listed numbers of residents by city for the first time, instead of only releasing an aggregate number of COVID-19 positive individuals, as well as those who have died from the disease in Orange County. Fullerton is currently listed as having nine cases and no deaths. Souleles emphasized that city numbers do not reflect where an individual may have contracted the virus, and that residents continue to be at risk countywide. “We don’t want people to assume that because their city either has a high number or a low number, that they are either at greater risk or lesser risk,” said Dr. Quick, who also noted that the numbers were not meant to represent “clusters or outbreaks” specific to a business or neighborhood. 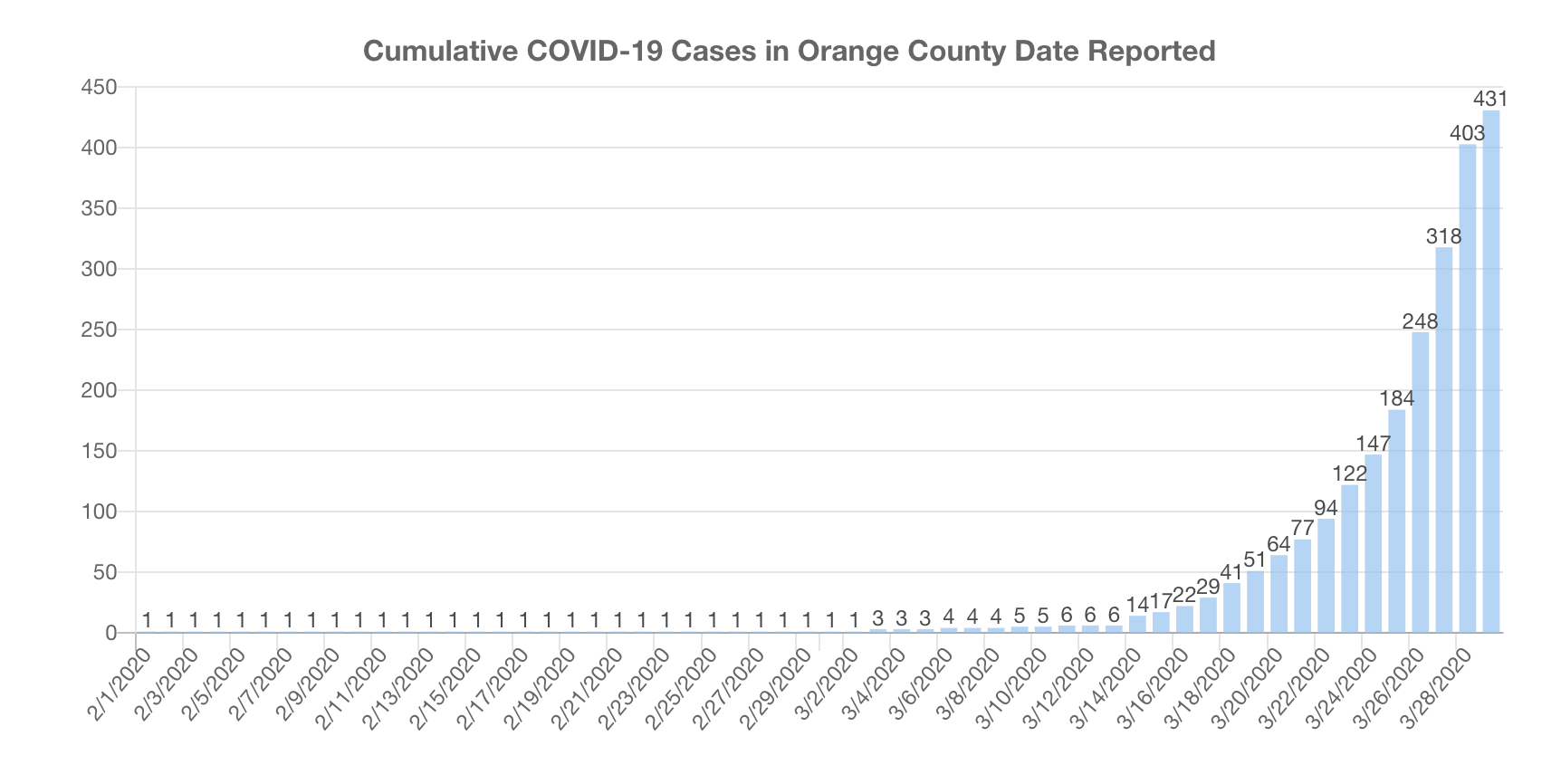 There are no numbers available for individuals who have recovered from the virus because, as Souleles explained, it is no longer required that patients test negative before being considered as having recovered, and, consequently, the total data is unavailable to the agency.

Dr. Quick said that the system of local hospitals remains below typical levels of activity based on availability of beds, but that the county anticipated more cases of COVID-19 and deaths from it in the coming weeks. The county is actively working with the State of California to “coordinate an alternate regional care site to treat ill but non-hospitalized patients, presumably to avoid overwhelming local hospitals, who, like Fullerton’s St. Jude Medical Center, have already canceled non-essential surgeries.

OCHCA has been addressing the shortage of Personal Protective Equipment (PPE) since late January by distributing M95 masks (775,000), surgical masks (250,000), face shields (5,000), gowns (45,000), goggles (5,000), and hand sanitizer (40,000 units) to hospitals and healthcare agencies from a local warehouse and state stockpile. Healthcare providers continue to submit requests for the scarce items, however, in excess of available supplies. Disruptions to the supply chain have resulted in healthcare providers receiving only partial orders of PPE nationwide, prompting OCHCA appeals to the state for more supplies, as well as efforts on the part of the agency to procure the items themselves. Souleles appealed directly to corporations and other businesses to donate new and unopened masks, face shields, disposable gloves, isolation and medical gowns, and antibacterial and disinfecting wipes by calling a county hotline at 714-628-7085.

Testing kits for the virus are also in short supply, leading to a prioritization of those at greatest risk or most ill for testing. Patients with underlying health conditions and/or those over the age of sixty-five are considered most at risk for developing serious or life-threatening cases of the disease. Dr. Quick reiterated a warning issued two days earlier about a particular South Korean serology test measuring antibodies in blood serum being offered by a Little Saigon doctor because it was not approved by the Federal Drug Administration (FDA). Other tests check for the virus by capturing it on a cotton swab from a patient’s nasal passage. 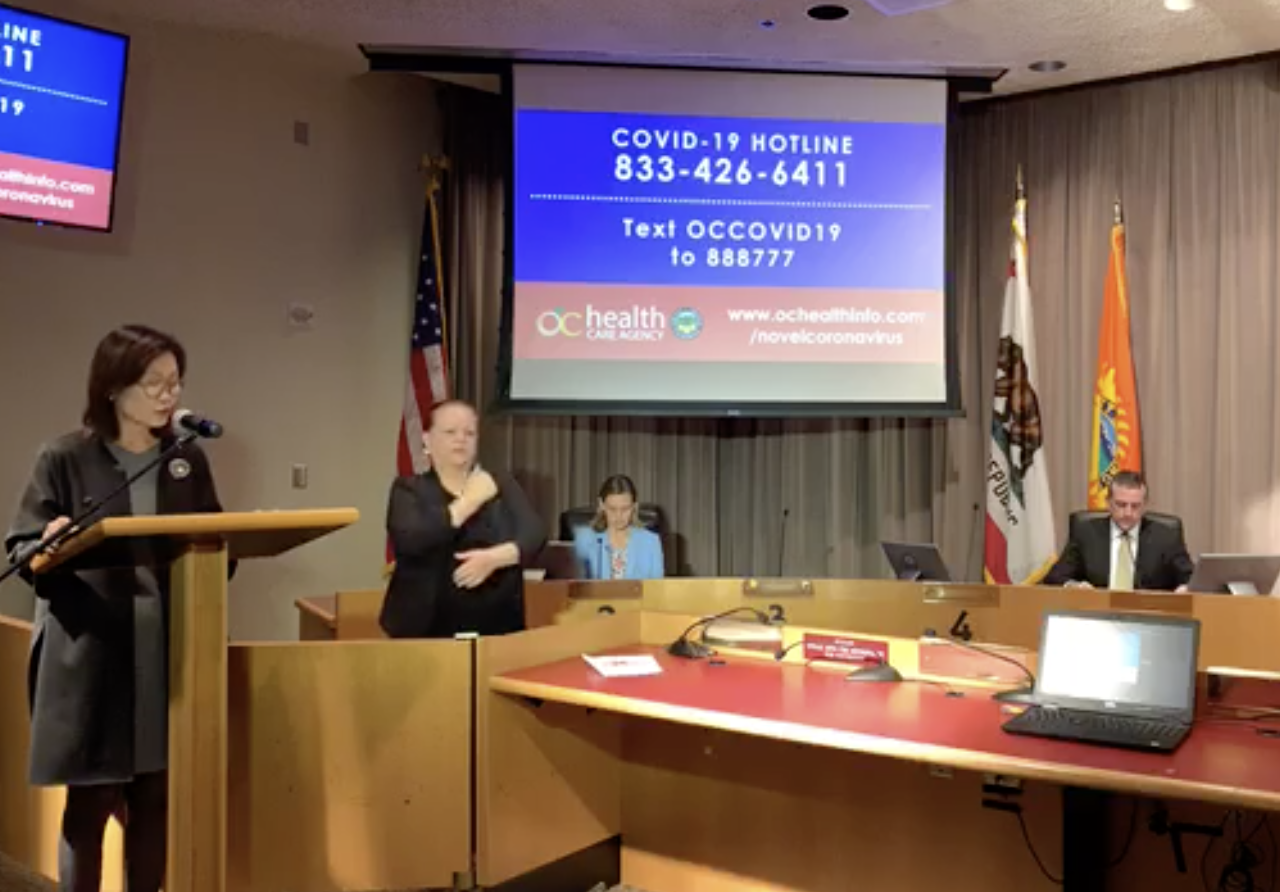 The World Health Organization estimates that over 80% of people who become infected with the virus will likely experience mild to moderate illness and recover, but transmission of the virus remains of such dire concern that the officials repeatedly urged county residents to comply with Governor Newsom’s “stay at home” order, issued March 19.

Asked by one reporter how long before the agency expected a difference in the numbers of cases in the county and for a time frame for the duration of the stay at home order, Dr. Quick noted that the incubation period for COVID-19 is thought to be up to fourteen days, HCA could only continue to monitor the situation over the next several weeks, she said.

County CEO Frank Kim responded to a question about how the county plans to deal with individuals who flout so-called social distancing guidelines for staying six feet apart from others while visiting county beaches and parks. Kim noted that parking lots for county facilities had already been closed, and that additional signage addressing the guidelines had been posted since last weekend, when people flocked to beaches and parks to seek relief from the isolation of their homes, ending up in groups dense enough for the virus to spread among them. Kim indicated that county employees would be visiting the parks over the coming weekend in order to evaluate whether or not more drastic, unstated, measures might need to be taken, presumably implying that the parks and beaches could be closed entirely.