The Fullerton Police Department in the Time of Coronavirus

While many of us are staying safe sheltering at home, the Fullerton Police Department is keeping us and themselves safe during the coronavirus pandemic.

Through strategic planning and deployment, Chief Robert Dunn has managed to put more than the usual contingent of officers on the streets of Fullerton keeping residents safe, and at the same time, taking measures to protect the health of department employees.

No department member, whether sworn officer or civilian employee, has contracted COVID-19, although there has not been universal testing.

To prevent the possibility of the force being overwhelmed by illness, at the onset Chief Dunn divided patrol officers into three groups—one group to work from home and serve as backup, if needed. The remainder were divided into two teams, a day shift and a night shift with no overlapping middle shift. Members of those teams are not allowed to interact in person thus preventing any cross-contamination, so that if one person gets sick in patrol it doesn’t take out all of patrol. Another precaution is having officers sanitize their vehicles at the beginning of a shift in lieu of the normal 30-minute briefing. In addition, the department has recently received two infrared thermometers so they can check officers’ temperatures before they go to patrol. And whenever in public they wear personal protective equipment (PPE) such as gloves and N95 masks. 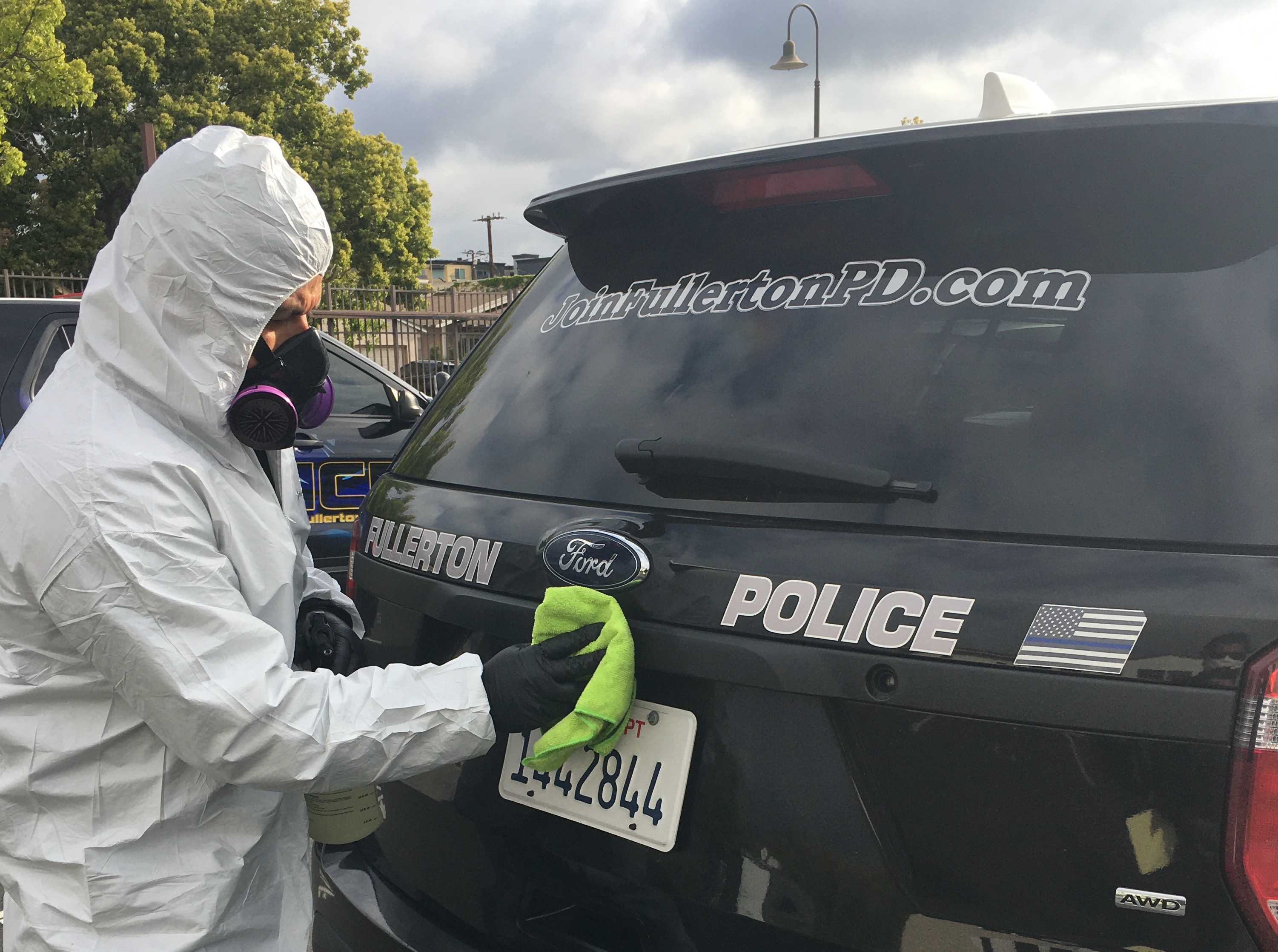 The department has identified additional backup forces to be called upon should a team be taken out by COVID-19. These include Detectives and School Resource Officers who have been working from home, as well as the Gang Unit and Directed Enforcement Team. Finally, the Orange County Sheriff has offered assistance should the department suffer an outbreak.

Regarding crime in Fullerton, the Chief reports that there has been a 26% reduction in “part 1 crimes,” that is, robberies, homicides and other serious felonies. At this time last year there had been 53 violent crimes reported and this year to date there have been only 39. Also retail theft (shoplifting) is down by 75%.

There has been a slight increase in property crimes, including motor vehicle theft, theft from vehicles, and both commercial and residential burglaries. Unfortunately, three of our downtown eateries were recently hit—Rialto, Les Amis, and Burger Parlor, probably by the same person. Police detectives have leads in these cases, but that does not provide relief to the business owners. In fact, due to the theft of its cash register, computer, and POS system, Rialto can no longer offer takeout and has had to shut down completely. Another business has been victimized twice. While these kinds of burglaries follow a trend observed in other cities, the increase in residential burglaries seems surprising since more folks are staying at home.

Other vulnerable sites are City facilities that have been shut down and are unattended. These, as well as other areas where there are “increases in criminal activity,” are patrolled by the members of the FPD Special Weapons and Tactics Team.

While there have been reports of speeding on Orange County freeways, Chief Dunn says there has been no increase in complaints about speeding on Fullerton streets. Also, he reports that in recent accidents, investigators have indicated that speed was not a factor in any of them. That includes the accident on April 21 in which a bicyclist died after a collision with a vehicle on Orangethorpe, although that investigation is not yet complete.

Domestic violence calls have increased slightly and the Fullerton Police Department response to those calls remains the same, with officers’ response and investigation being done in person (while other crimes such as misdemeanors and property crimes are being handled by phone). The department will “take appropriate enforcement action as necessary” and can get a victim into a shelter, if needed. In the event that the abuser is in the same room and the victim feels that they would be endangered by calling police, they can use “Text to 911.” This can be initiated like any other text message by typing “911” into the recipient field.

A new rule requiring workers at grocery and drug stores, gas stations and other essential businesses in Orange County to wear a mask or face covering when interacting with the public, went into effect Friday, April 24. The city of Fullerton enhanced the County’s mandate by requiring face coverings be worn by customers of those essential businesses. This also went into effect on April 24. The purpose of the City’s order is to reduce the spread of the novel coronavirus. If you enter a business and see patrons without masks, contact City of Fullerton Code Enforcement, (714) 773-5704.

Health officials have emphasized that the general public should not buy medical-grade masks, including N95s, which should be reserved for medical workers. Instead, a paper mask or cloth bandana will do, so long as the mouth and nose are completely covered. Face covering should be used whenever a person is outside their home. Wearing a mask does not eliminate the need for social distancing and washing your hands thoroughly.

The City’s regulation stems from the understanding that transmission of coronavirus occurs mostly through droplets from an infected individual, which fabrics can easily filter. Covering the nose and mouth does reduce somewhat the risk that a well person can breathe those droplets in, although their eyes are not protected. But the primary reason to wear a face covering is that it protects others around someone who may have contracted COVID-19 but does not show any symptoms and does not yet realize they have the illness. Face coverings are worn to protect others.While an Administrative Citation could be issued for violation of the City’s new order, the Fullerton Police Department approach is for officers to respond with “the goal of educating and getting an understanding.”