Fullerton elementary students picked up their lunches from school like usual last week and were left astonished when staff asked if they’d like a special addition to their meal: a complimentary comic book.

The Fullerton School District began distributing comics with lunches on Tuesday, May 5. Each elementary school has received one box containing roughly 240 books.

The heroes of this story? None other than Comic Hero University owner, Enrique Muñoz and his shop’s supporters, whom he refers to online as his “fellow heroes.” 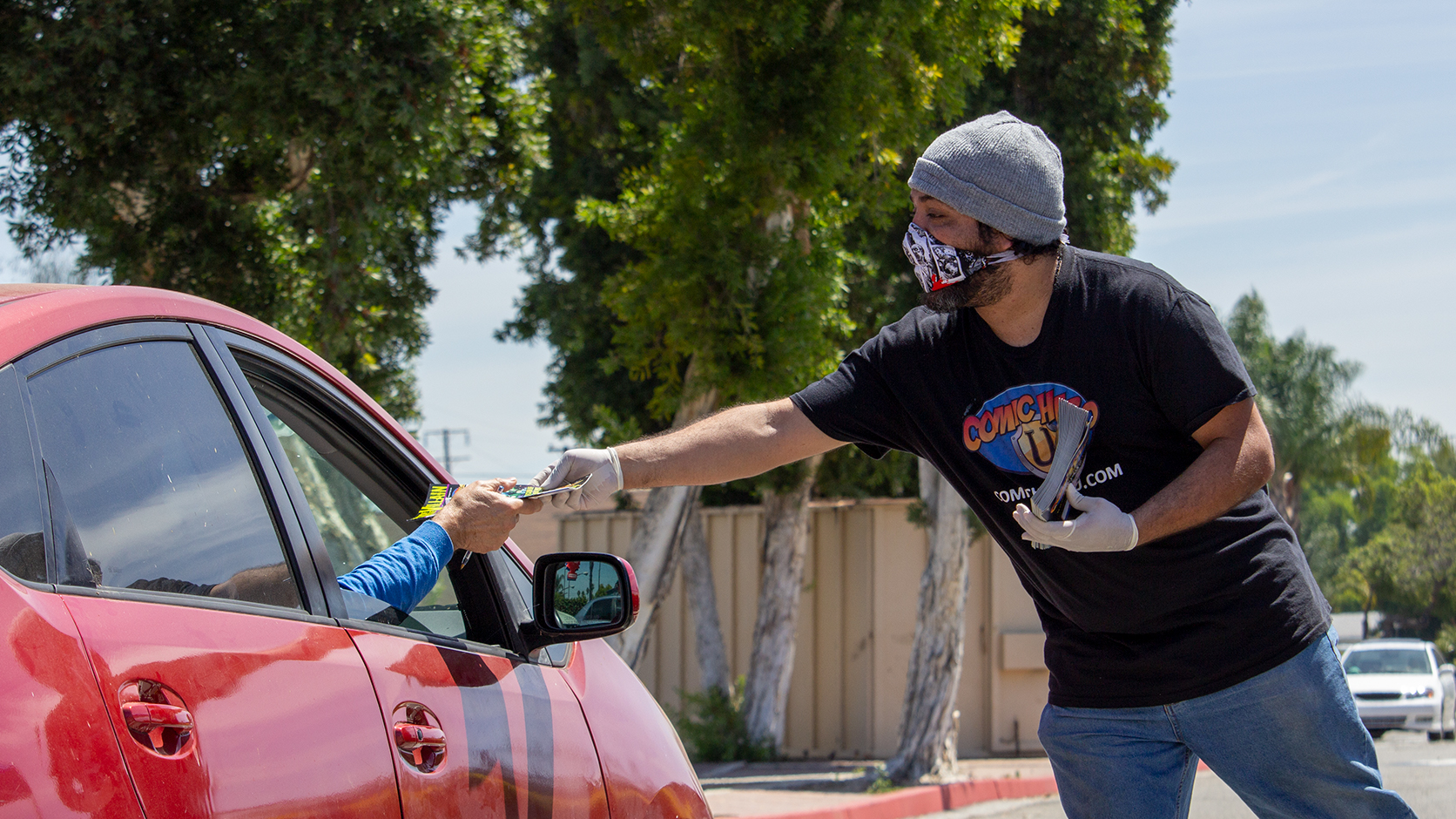 Muñoz launched a pay-it-forward program at the beginning of April to continue a revenue stream. Donations have been used to purchase comics that will ultimately go to elementary schools, public libraries and hospitals. So far, Muñoz has been able to give roughly 2,600 comics to local elementary schools. There are currently 1,500 comic books pending district approval and another 1,500 that he plans to donate.

Muñoz became inspired to pay it forward through a retailer group he’s a part of on Facebook. He opened the program up to everyone so anyone could give whatever amount they wanted, as opposed to only allowing larger contributions.

Fullerton’s friendly neighborhood Spider-Man gave credit where credit is due when asked about the process in making the comic-lunch distributions happen. “I reached out to the district to kind of pitch the idea of the program…just to go to the elementary schools, the libraries, and the hospitals,” Muñoz said. “But the idea of distributing with lunches wasn’t even my idea. That was my mom’s. She was the one who pointed it out to me and was like, ‘Hey, the schools are still giving out lunches. What if you were to also hand out comic books?’ That’s it. That’s a pretty good idea.”

Muñoz considers comics to be just as important as classical literature and that they’re not only entertaining, but educational in that they can help children who struggle with reading comprehension.

“When I was younger, I couldn’t comprehend the English language. I was a Spanish speaker first. I had trouble speaking the language, and I had trouble reading the language. It wasn’t until I bought my very first Spider-Man comic book. There was something about the picture with the word that really kind of set it off for me,” Muñoz said. “If it worked for me, I think it could work for somebody else.”

The comic book that students are currently picking up is DC’s “Year of the Villain,” an entry level comic book Muñoz and the district are using to see how well the program works.

Pam Chow is the project liaison in the superintendent’s office for the Fullerton School District. She acknowledged that without Muñoz’s donation, comics may otherwise be unavailable to students and that the district is strong on helping kids find and explore their passions.

“This is just such a great, generous donation. It’s so cute; a car just drove by and you can hear the little kids saying, ‘Yay, yay, yay!’ so that’s heartwarming,” Chow said. “It’s actions like these where the kids are able to get something that they’re so excited about when there’s so much that they don’t have access to right now. For their happiness—that just hits the right spot.”

Chow has left it up to schools to determine when they will distribute their portion of comics.

Superintendent of the Fullerton School District Dr. Bob Pletka  expressed a great appreciation for Muñoz’s contribution. “We really thank Enrique for doing this. We’re grateful for this community. We have so many good people from our community who step forward during a crisis—business owners, nonprofits, churches—and really make a difference,” Pletka said. “That definitely goes noticed, and Enrique’s a part of making a difference in the lives of our students.”

Muñoz has comics already set aside for libraries and is in the process of finding a means to provide them to children in hospitals. According to Muñoz, Comic Hero University will receive new comics and conduct business “as close to normal” on Wednesday, May 20. The store is located at 1001 S. Lemon St., Fullerton, CA 92832.

Anyone who would like to be a part of Comic Hero University’s pay-it-forward program is encouraged to contact the shop at (949) 424-3768 or comicherou@gmail.com. Donations can be made using cash, credit/debit card, PayPal, and Venmo.