Fullerton’s cumulative total of COVID-19 infections surpassed 200 by the end of May. The Orange County Health Care Agency (OCHCA) does not report hospitalizations or deaths from the virus by city, but it is known that an outbreak occurred at the homeless shelter temporarily located in Fullerton’s Independence Park. Countywide, 145 people are known to have lost their lives to the COVID-19 virus to date; nearly 6,000 infections have been reported. OCHCA assiduously notes that nearly 1,000 of those cases have occurred in skilled nursing facilities and jails, which have each experienced rising infection rates. For the first time, the County has begun to include numbers of individuals known to have recovered from the virus, although the information is not considered to be of specific epidemiological value because it is difficult to track.

Just before Memorial Day, the county of Orange submitted a Variance Assessment application to the state of California. They issued a press release on Saturday, May 23, announcing that the State had accepted the application, allowing a partial reopening of many businesses as long as they adopt safe practices for social distancing. The following are now permitted to open if they follow the State’s guidelines:

•Offices (when telework is not possible)

Even hair and beauty salons can open as long as everyone wears face coverings, but no procedures that involve the touching of faces are allowed. Church services, funerals, cultural services, and protests are permitted, but only if they involved fewer than 100 people outside. Inside, no more than 100 people may gather, or 25% of a venue’s normal capacity, whichever number is smaller. 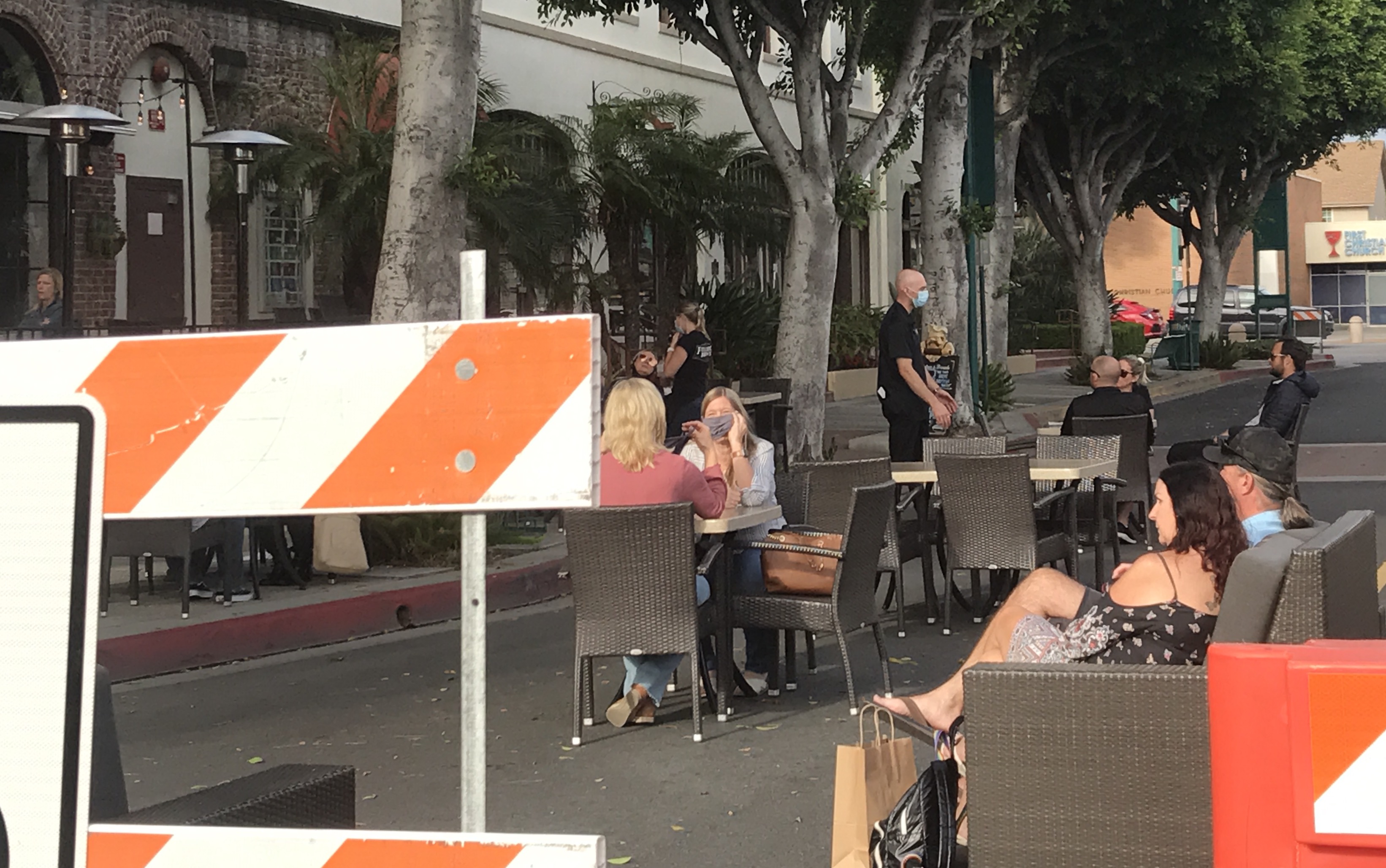 Patrons of Fullerton Brew Co. sit in a blocked-off section of Wilshire Ave. downtown, which the City did to allow more dine-in capacity. This section happens to be part of Fullerton’s Bike Boulevard. Photo by Jane Rands.

Weddings with groups are still not allowed and private gatherings should be limited to those sharing the same household. College courses must follow distance learning protocols, regardless of lab requirements. Many other businesses and activities are still forbidden, like nail salons, bars, gyms, sport clubs, gymnastics centers, dance/ballet studios, Little League and all other sports camps, and private and public schools. Swimming pools, even in private developments, cannot open. John Wayne Airport continues to operate.

According to the County’s press release, OC was able to move into Stage Two of the State’s four stages of opening by meeting the following requirements:

Have a capacity to be able to test 1.5 per every 1,000 residents and at least 15 staff per 100,000 county population trained and available for contact tracing.

Hospital capacity for a possible surge of 35% of hospitalizations due to COVID-19 cases in addition to providing usual care for other patients.”

On the same morning the County was allowed to partially reopen, Dr. Nicole Quick, OC’s County Health Officer, released a detailed and prescriptive countywide order reiterating the need for persons with COVID-19 to self-isolate (except to receive medical care) for at least 72 hours after recovery and at least 10 days following the appearance of first symptoms, a 10 day isolation period for anyone testing positive for the virus but not showing symptoms, and self-quarantining for 14 days of anyone in close contact (within 6 feet for at least 15 minutes) for an individual known or likely to have COVID-19. The self-quarantine rules do not apply to healthcare or law enforcement professionals.

Dozens of people complained in person to the Board of Supervisors (BOS) during their regular meeting on May 26 about the face covering requirement, some not seeming to realize that wearing a face covering is for the purpose of preventing a person from spreading COVID-19 through infectious droplets at least as much as it is to avoid catching it the same way. One complainant threatened Dr. Quick, drawing immediate condemnation from County officials.

Not all members of the BOS itself were supportive of the face covering section of the order, but, because Dr. Quick’s authority derives directly from the State, were unable to modify or cancel it. BOS Chair Steel didn’t seem to understand, at least prior to Dr. Chau’s repeated explanations, that persons who might not be aware that they had the virus and exhibit no symptoms at all can easily spread it to others. Dr Chau also related his own experience receiving many communications from County residents urging him to show support for the order.

OC Sheriff Don Barnes announced that he would not enforce the face covering order, saying that his department was “not the mask police,” and preferred a strategy of educating the public about the importance of wearing face coverings.

The County has reopened parking lots for beaches and wilderness parks, but maintains the importance of social distancing while enjoying these amenities.

How the County is Spending CARES Act Funds

OC’s Board of Supervisors defeated a proposal by Chair Michelle Steel and Sup. Don Wagner to send $75 million made available to the County from the federal CARES Act directly to businesses hard hit by the closing necessitated by the pandemic. Instead, each of the five supervisorial districts will receive an equal share of the funding, where their respective supervisors will independently decide how to distribute the funds. Sup. Steel announced that she would send the $15 million for her district to the constituent cites within it, proportioning it according to the populations of the cities. Fourth District Supervisor Doug Chaffee’s (Fullerton) office is developing different criteria for dispersal of funding, instead relying on a local office of the Small Business Development Center, to which businesses would presumably need to apply for support.

The County is also spending CARES Act funds on a mobile testing unit being put to use for testing congregate living facilities such as skilled nursing facilities, jails, and group homes, all of which are at heightened risk because of the close proximity of inhabitants to one another.

State officials recently instituted a requirement that all patients in skilled nursing facilities be tested for COVID-19. The County’s testing procedures have been modified accordingly, with all jail staff being tested as well as increased cleaning of facilities.

Late in the afternoon on May 29, OCHCA revealed a serious error in communicating test results from patients in an OC skilled nursing facility. Ten patients given tests by the County’s own health lab on May 18 were erroneously reported to have tested positive for COVID-19. All were  transferred to a restricted COVID-19 patient unit, needlessly exposing them to patients who had actually tested positive for the virus.  The mistake evidently was not discovered for ten days. All ten patients were retested for the virus. Of the ten, only one was now positive for it. That patient remains in a COVID-19 unit, but is not reported to be showing any symptoms of the disease. The other nine patients were transferred to a quarantine unit for fourteen days. The County would not reveal the name or location of the facility affected, citing privacy concerns.

OCHCA Director Dr. Clayton Chau said that the County is auditing every step of its communications process to determine how the error occurred, and was unwilling to speculate about it until the completion of the review. He stressed that the lab results themselves were accurate. The relatively small number of cases involved was not enough to affect the County’s partial opening status.

County CEO Frank Kim revealed on May 28 that 13 homeless individuals had tested positive for COVID-19 across two different homeless shelters, one in Anaheim and one in Fullerton. Although Kim did not specify which shelters were involved, the only one operating in Fullerton is the one that was formerly housed in the Armory on Brookhurst, and now has been temporarily moved to the gymnasium at Independence Park on Valencia Ave. Further investigation by The Observer confirmed that two cases had occurred at the Independence Park facility, operated by Mercy House, who also operates the Bridges at Kraemer shelter in neighboring Anaheim. It is not known if that is the same Anaheim shelter where 11 clients tested positive for the virus. 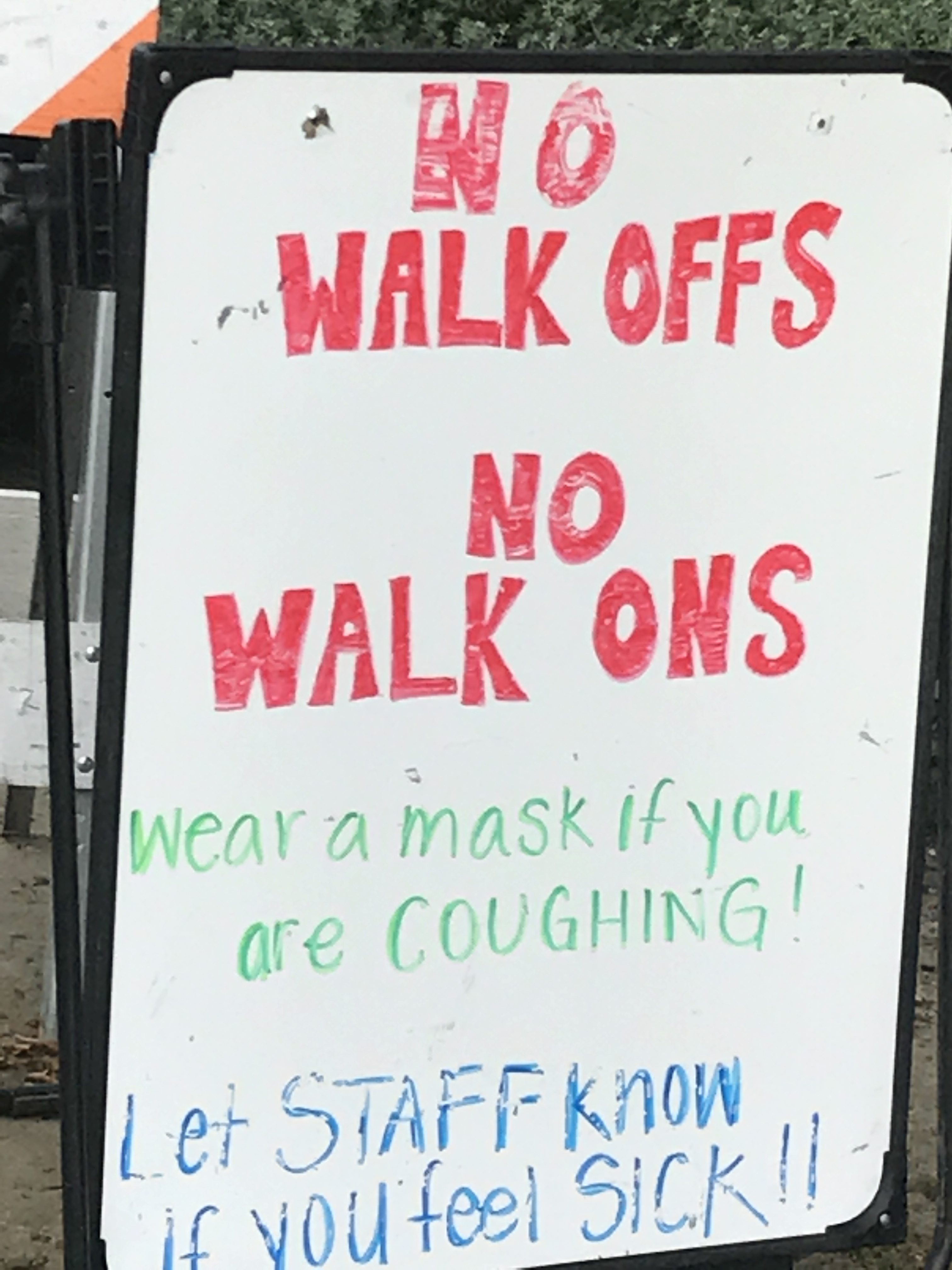 Independence Park, where the nearby swim center is partially open, is not accepting new applicants. Clients currently residing there are not allowed to leave. All have been tested for the virus. According to OCHCA, none of the homeless individuals who tested positive have died from the virus. One staff member tested positive. The County did not say in which facility the staff member was working, but did say that they had not identified a link between infections at the two facilities. The clients who tested positive from both shelters were sent to motel rooms through the County’s Project Roomkey, which utilizes State funding to rent vacant hotel rooms for homeless individuals. There they will receive isolation and recovery services.