Approaching mid-September, California’s cumulative number of COVID-19 cases is nearing a quarter million, deaths are nearly 14,000, and 12,389,991 total number of tests have been performed statewide for the presence of the virus.

Locally, Fullerton has recorded 2,289 cumulative cases, a rise of 452 from 1,857 at the end of August. By comparison, the City added 1,228 cumulative cases in the month of July, suggesting that transmission is slowing. Fifty Fullerton residents have died from the virus since the pandemic began. The Fullerton Community Center remains closed for regular activities, although it did re-open briefly early in September to serve as a cooling center during the heat wave and recently hosted an Emergency Rental Assistance Program Event. The Fullerton Public Library has been open for pick-up service only. The City Council meets in person, although City committees and commissions continue to meet virtually.

The State of California’s Blueprint for a Safe Economy (https://covid19.ca.gov/safer-economy/), introduced in late August, is described as a “revised criteria for loosening and tightening restrictions on activities” as needed in response to changing metrics used to assess the severity of the pandemic in individual counties across the State. The four-tiered system replaced the County watch list. According to the State’s website, “Public health officials are constantly monitoring data and can step in if necessary.” 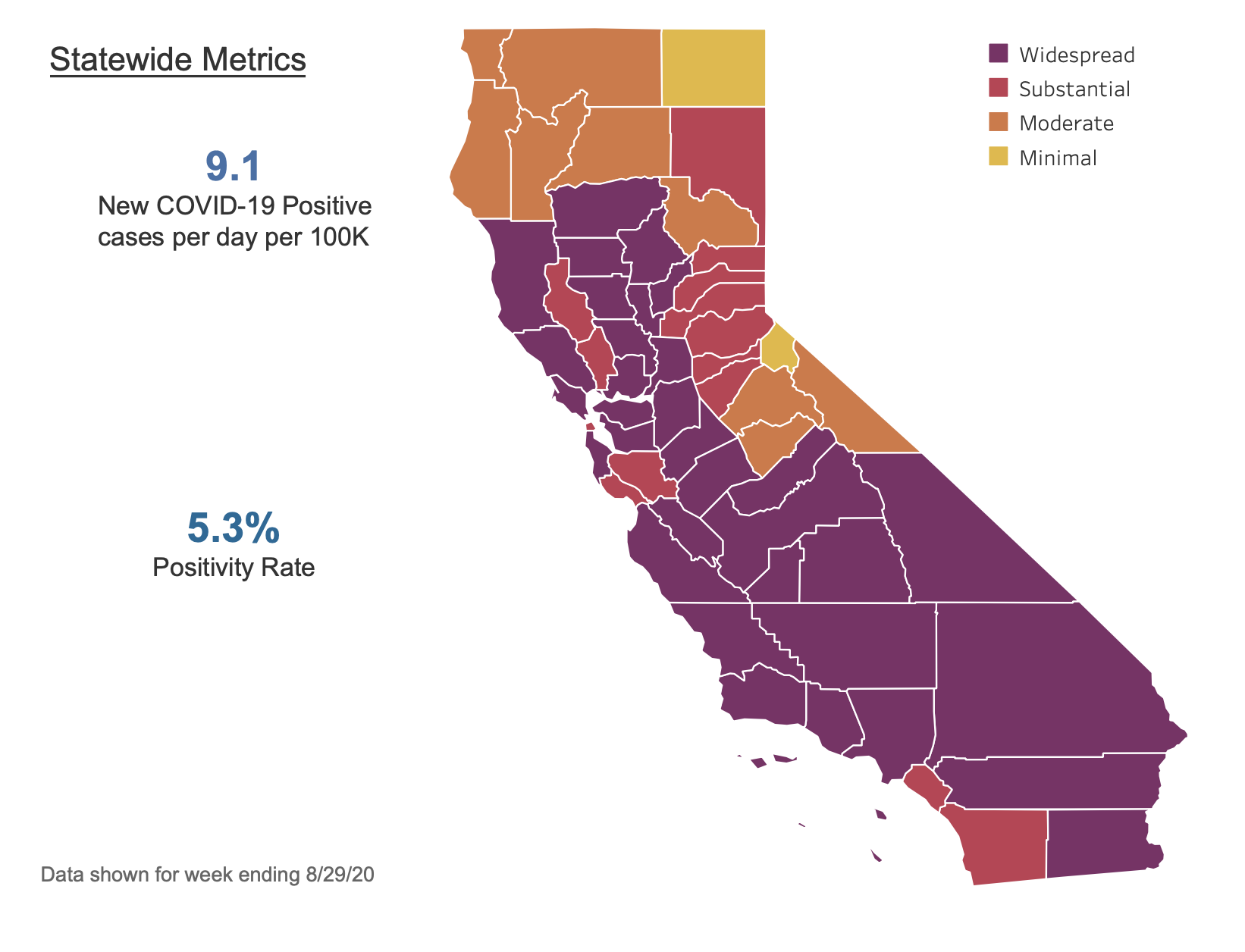 The State is allowing Orange County to move from the most restrictive of its 4 newly-defined tiers, measuring the intensity of the pandemic as defined by test positivity rates and adjusted case rates. On Tuesday, Sept. 8, OC transitioned from the Purple Tier, defined as having a “Widespread” risk level with more than 7 new daily cases per 100,000 residents and a greater than 8% test positivity rate, to the “Substantial” Red Tier, with between 4 and 7 daily new cases and between 5% and 8% positivity rate. Orange County’s current number of cases per 100,000 is 5.2, while its testing positivity rate is 4.2%. County officials hope to eventually move to the less restrictive “Moderate” Orange Tier, and, ultimately, to the Yellow “Minimal” Tier, but counties must maintain case rate and positivity levels for a minimum of three weeks before moving from one tier to the next less restrictive one.

Nearly all of southern California, with current exceptions of Orange and San Diego Counties, are still in the Purple Tier, as are the more densely populated counties in the central and northern regions of the State. The State’s combined positivity rate is just over 9%, with a 5.3% test positivity rate.

Moving into the Red Tier allows some businesses to reopen, but only with restrictions. Gyms, churches, movie theaters, restaurants, shopping centers, hair salons and barbershops, personal care services (massage services, body waxing, tattoo parlors, etc.) may all re-open with modifications that include accommodating mask wearing, allowing physical distancing, increasing air flow, and limiting the number of people per square foot. The requirement to limit activities that are known to increase virus spread (like singing, shouting, and heavy breathing) will have obvious implications for many churches. Museums, zoos, and aquariums may also re-open with modifications, and with limitations of 25% of normal capacity. The latter requirement also applies to houses of worship, movie theaters, and restaurants. The Fullerton Museum has been closed since most of its staff were laid off by the City, however they have hosted a new exhibition for limited hours.

During a recent press conference, OC’s Health Agency Director Dr. Clayton Chau expressed optimism about decreasing test positivity rates in County hot spots in the cities of Santa Ana and Anaheim, where in some cases test rates were as high as 19%, but have dropped to 10%. Chau credited the department’s Latino Health Equity Initiative for proactively targeting for testing and for disseminating information about the pandemic to people living in those areas. It is commonly understood that central Anaheim and Santa Ana have been the hardest hit areas of the County because of the higher density of populations there, and the greater likelihood that residents are working in frontline occupations where they are more likely to come into contact with other members of the public.

California is soon expected to announce a new State Health Equity initiative said to be similar to the Latino Health Equity Initiative in OC. Chau characterized OC as being “ahead of the game in this way.”

In what otherwise might seem like the subject of a distressing children’s book, Los Angeles County has officially canceled Halloween this year, or, at least, banned trick-or-treating. At press time, Orange County had not done so, but Director Chau, who also serves as OC’s County Health Officer, did say that he and others in that position in other counties had scheduled a conference call to discuss the issue.

Of great concern to County health officials is the strong probability of an overlap of the ongoing pandemic and the upcoming flu season. Chau urged residents to avail themselves of flu shots to avoid confusion over the cause of symptoms, which can be similar in the two illnesses. The County is reportedly working on a plan to increase availability of flu vaccine doses in preparation for the season. Individuals may call (800) 564-8448 to find out where clinics offer free shots. Chau said that the federal government has increased support to states, and that the state would be expecting a new shipment of flu vaccines sometime this month. Flu shots will be available in all five county districts, with drive through options available to help restrict the spread of the coronavirus. Call (800) 914 4887 for an appointment.

Already the focus of some controversy over his recent hiring as County Health Officer while also serving as Health Agency Director despite the County having received resumes from at least 10 qualified candidates for the former position, Dr. Chau was recently revealed to have earned one of his degrees from a now discredited institution. The Voice of OC reported on  September 10 that Chau “earned a Ph.D. in clinical psychology from Chelsea University in London in 2004.” (https://voiceofoc.org/2020/09/questions-continue-to-swirl-around-orange-county-health-directors-qualifications/) According to the story, Chau took online classes, finishing his PhD in clinical psychology in 2004, and didn’t know about the school closing until 2012 when he worked for CalOptima, the County’s health network. He noted that he has never practiced as a licensed psychologist. Dr. Chau has a medical degree from the University of Minnesota. 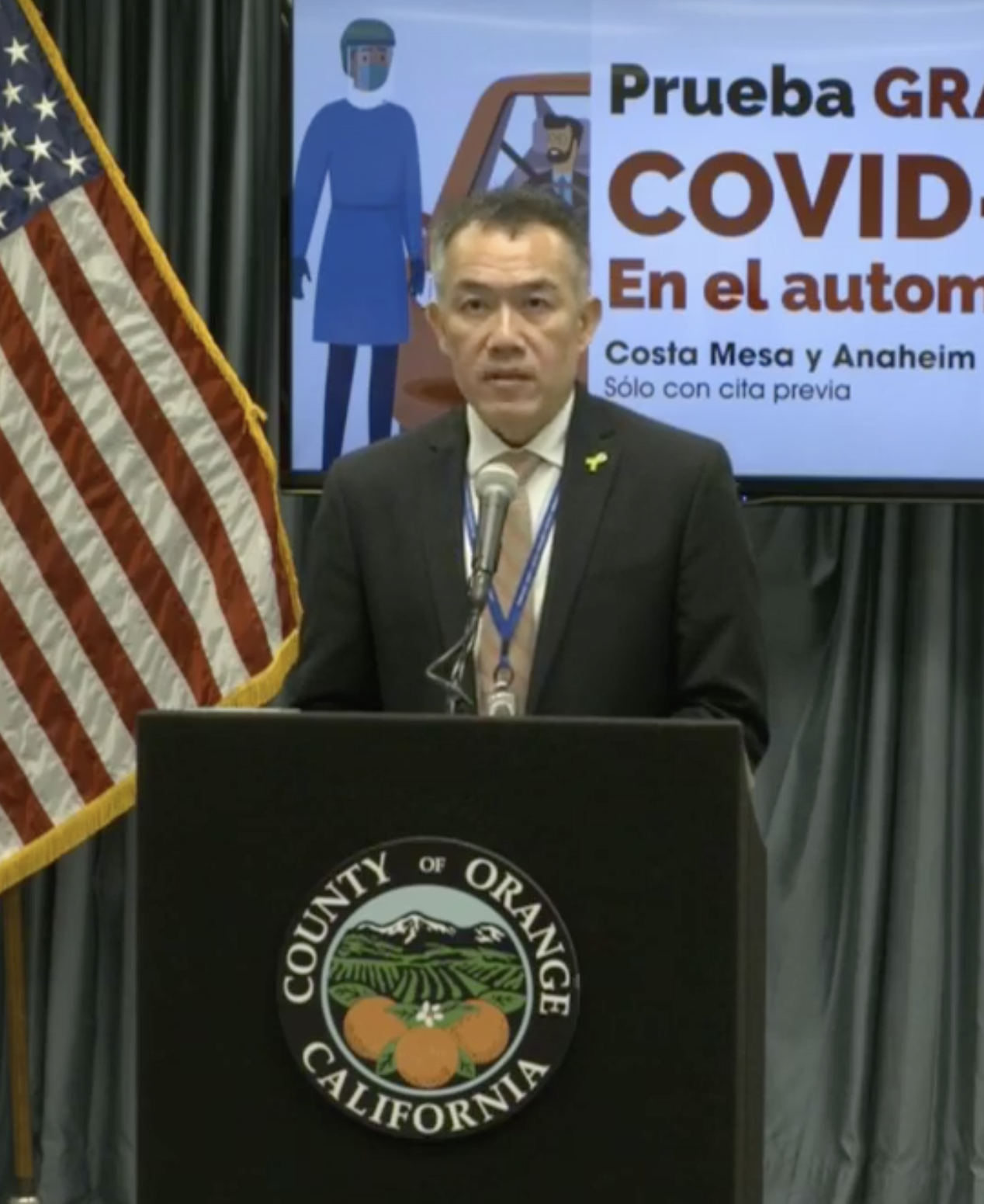 Board of Supervisors Chair Michell Steel, who represents the 2nd District, defended Dr. Chau in response to questions about what the Board knew of his PhD when hiring him for both positions by asserting that he had 30 years of experience, was working very hard on behalf of the public, and maintained a valid license to practice medicine. A list of questions sent to 4th District Supervisor Doug Chaffee, whose district includes Fullerton, asking for his response to revelations questioning the legitimacy of Chau’s PhD as well as his hiring as County Health Officer was met with a curt response from his Chief of Staff that Chaffee declined comment at this time. 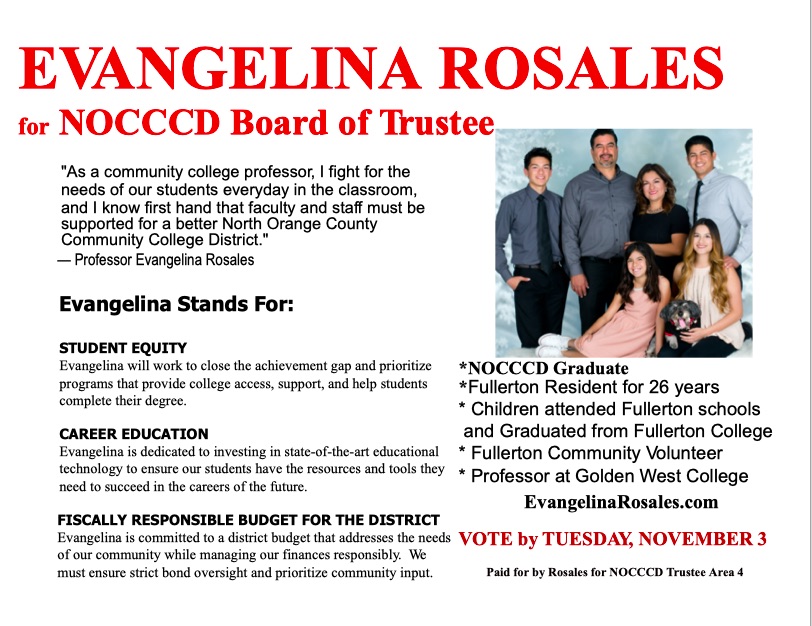