The Fullerton Police Department has announced that it will continue to “take an education-first approach with regard to orders imposed by the State.” This approach is consistent with that taken by the department since the first mask order was imposed by the City, followed by the State, in May. FPD Public Information Officer Cpl. Billy Phu is confident that the FPD’s approach has “been successful in gaining voluntary compliance from businesses as well as individual community members.” 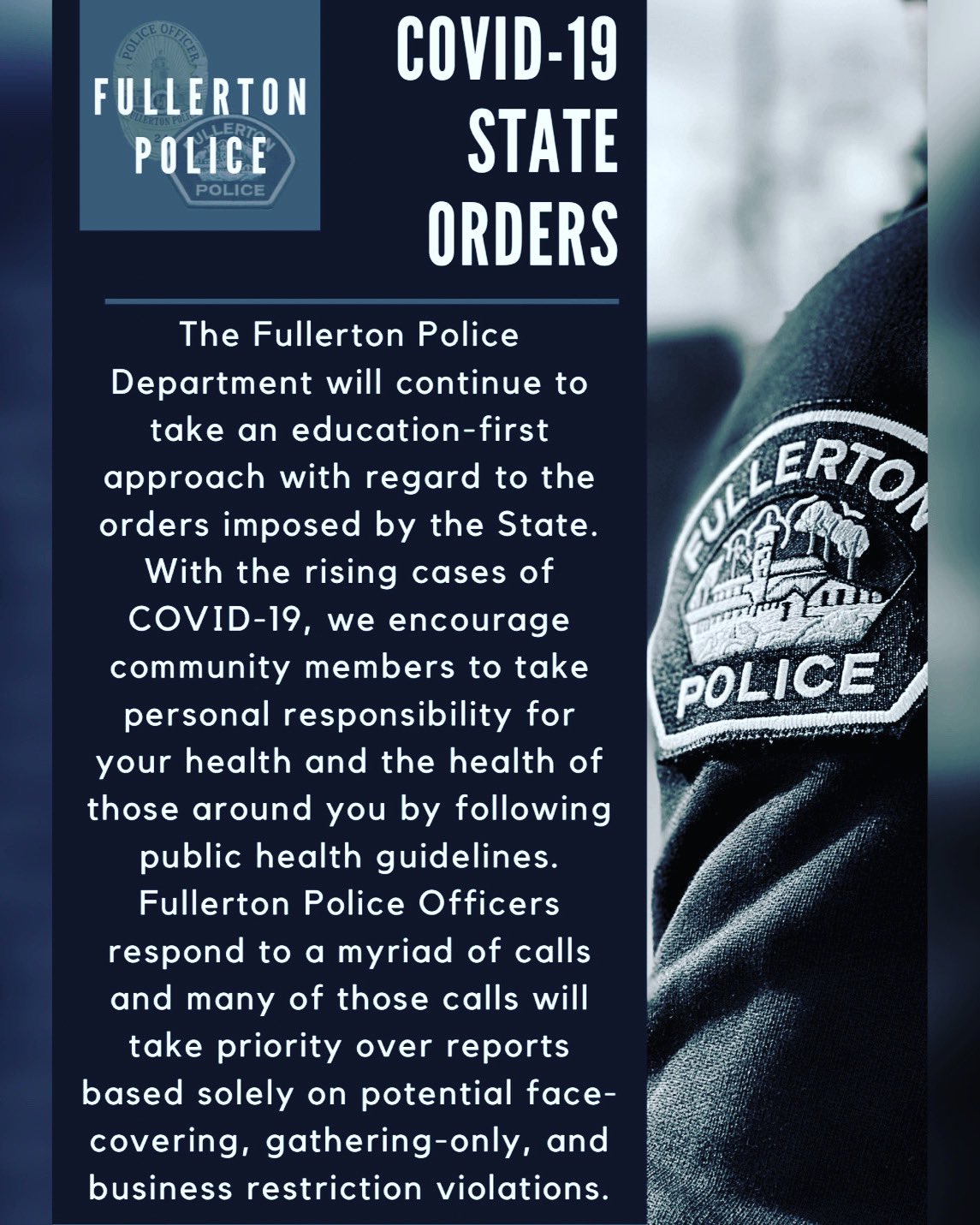 “In cases where we are unable to garner the compliance, Fullerton PD would document the violation(s) and forward the incident(s) to the Orange County District Attorney’s Office for prosecutorial consideration,” Cpl. Phu said. The department, which has closed its own front desk to visitors to help prevent transmission of COVID and protect its employees, does file reports in instances where their education approach has “not gained voluntary compliance.”

California currently mandates the wearing of effective face coverings in public situations, and has imposed a regional order affecting businesses and public facilities, and requires residents to stay in their homes between the hours of 10:00 p.m. and 5:00 a.m. with exceptions made for work and other essential needs. A statement from the FPD issued on Dec. 6, the day the Regional Stay-at-Home Order was set to take effect, states that, “Fullerton Police Officers respond to a myriad of calls and many of those calls will take priority over reporters based solely on potential face-covering, gathering-only, and business restriction violations.”

Mayor Bruce Whitaker, who represents the City’s Fourth District, supports FPD Chief Dunn’s direction calling it “well considered,” and does not support imposing fines for people refusing to comply with State COVID-19 prevention rules, telling the Observer that, “The Council has a role in balancing the ever-changing rules, requirements, and regulations from Sacramento with providing some possibilities for local businesses to survive this hostile climate and implacable threat.”

Newly-elected First District Council member Fred Jung disagrees with Mayor Whitaker saying that, “Mask mandates have been shown to be effective in slowing the spread of the virus. And if adding fines gives gravity to that fact, it should certainly be looked into because there are lives at risk.” He noted that “Costa Mesa did pass a mask mandate and added a fine and because of nearly non-existent enforcement, it took months before a violator was even fined at all.”

In a possible reference to previous Mayor Jennifer Fitzgerald, Jung also said that it was not helpful when a member of the previous City Council politicized the mask mandate, making it “about individual choice/freedom and not public health.” Bruce Whitaker also voted against a city mask mandate earlier this year prior to California adopting one statewide.

Jung also said, “The guidelines and messaging from the County versus the State throughout this pandemic have been inconsistent and confusing to the general public.” The County Board of Supervisors recently adopted a resolution advocating for greater local control over COVID-19 management, and several members of the BOS have been very vocal about their disagreements with Gov. Newsom’s approach to fighting the spread of the virus.

Council members Ahmad Zahra, Jesus Silva, and Mayor Pro Tem Nick Dunlap did not respond to the Observer’s requests for comment on the issue.

Elsewhere in OC, the city of Santa Ana has established a compliance hotline to report COVID-19 business violations, large parties, and people ignoring social distancing rules and/or not wearing face coverings. According to the OC Register, complaints to the Santa Ana line will be referred “to various agencies as needed, including code enforcement and police.”

The State’s COVID-19 website warns that, “Failure to comply with the order may be punishable by fine and as a misdemeanor, revocation of a business license, or court-imposed penalties,” but does not specify who would bring such charges against violators. Orange County Sheriff Don Barnes has declared outright that enforcement of COVID-19 orders is not the job of the Orange County Sheriff’s Department. In interviews, he has questioned the constitutionality of the State’s orders and called them arbitrary. He claims that in other states enforcement of mask rules ended badly.