After looking over my dad’s old AAA “California’s Gold Guide Map” that highlights places in California visited by Huell Howser in Road Trip with Huell Howser and California’s Gold, I noticed a marker in Fullerton for the “Wall Gazing Gallery” at Cal State Fullerton. While the CSUF campus is currently closed because of the COVID-19 pandemic, I thought it would be interesting to take a look back at old photographs of CSUF’s outdoor sculpture collection, which happens to be “one of the largest outdoor sculpture collections owned by a university in Southern California,” according to the Daily Titan.

Originally a temporary installation, artist Richard Turner’s “Wall Gazing Gallery” was permanently installed in the central courtyard of the Visual Arts Center at CSUF in 1988, using National Endowment for the Arts funds granted by the Art in Public Places Program. Artist Richard Turner said in the “Liquid Art” Road Trip with Huell Howser episode, “The title of the piece comes from a Buddhist legend about Bodhidharma, who was the man who brought Buddhism from India to China. When he got to China, he spent seven years in a cave gazing directly at the wall, staring at the wall in search of enlightenment, which he ultimately achieved.” 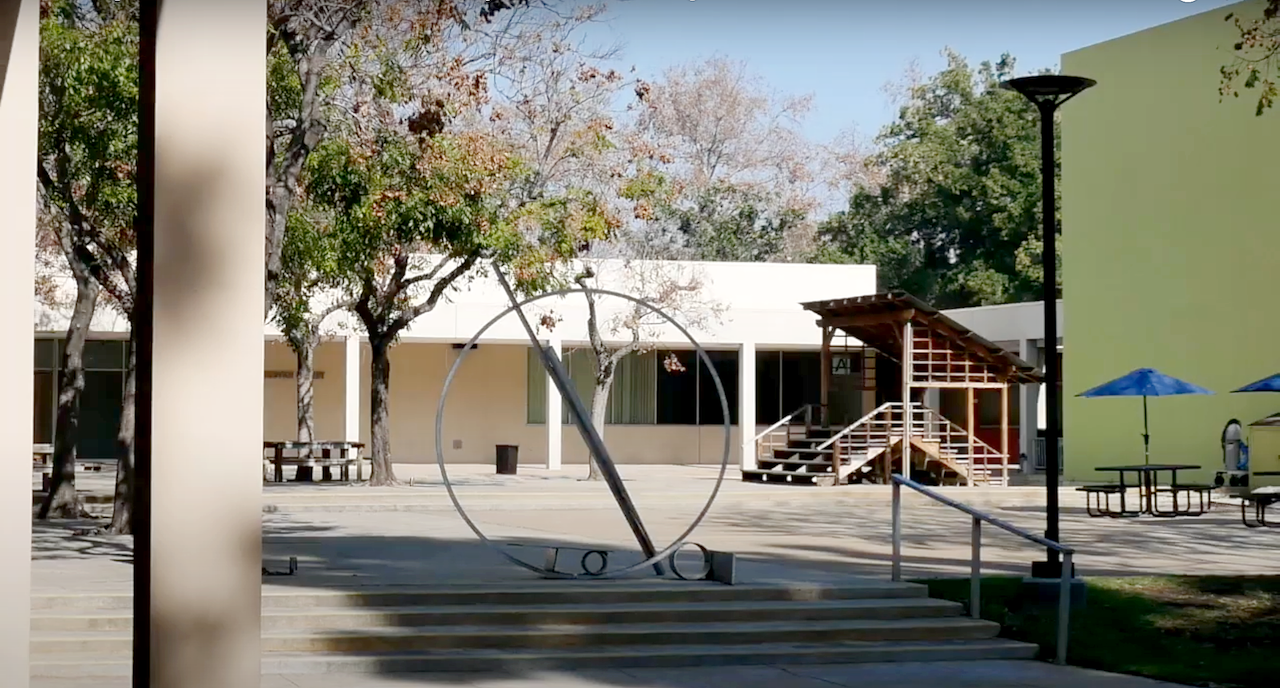 The sculpture was also inspired by the artist sitting around with his best friend in Thailand in a tin-roof building with rain clattering down on it. “We were sitting around and having a conversation and I was thinking, ‘I’m in heaven. This is wonderful. This is what living is for,’” said Turner in his 2002 Huell Howser interview. “And then when I got back to the United States, I thought, ‘I wonder if there’s some way that I could share this kind of experience with other people.’ And ultimately, this is what I devised for that. The idea is easy. Maintaining it and making sure that it continues to work over the years, that’s where the problem lies.”

According to the “California’s Gold Guide Map,” Turner was “honored by the Metropolitan Water District of Southern California for [his] creative depictions of water in public spaces.” Composed of cedar, corrugated steel, rock, and the soothing sound of water trickling down into a small pool, Turner’s “Wall Gazing Gallery” used to be a place where CSUF students could study or hang out in a relaxing environment. However, because of the pandemic, students now have to find a different kind of relaxing place at home in their virtual college classrooms.

Another water-based sculpture located in Cal State Fullerton’s Department of Visual Arts is artist Ray Hein’s rather abstract sculpture “Water Wall,” which was created and installed in 1970, and was made using cold rolled copper sheets and forged bronze, according to the Sculpture Collection page on CSUF’s Department of Visual Arts website. When art gallery director Dextra Frankel saw a particular piece of Ray Hein’s jewelry, she suggested that it would make a wonderful sculpture and Hein was soon commissioned to create an artwork for the wall and reflective pool found at the east end of the Visual Arts Center. The artist donated his time, Mr. and Mrs. Leon Lyon donated funds for the material, and Royal Metals of Santa Ana made the metal from the artist’s maquette. Interestingly, in 2006, after the construction of the performing arts center on the CSUF campus, Water Wall was taken down and moved to “create a visual bridge between the visual and performing arts complexes.” 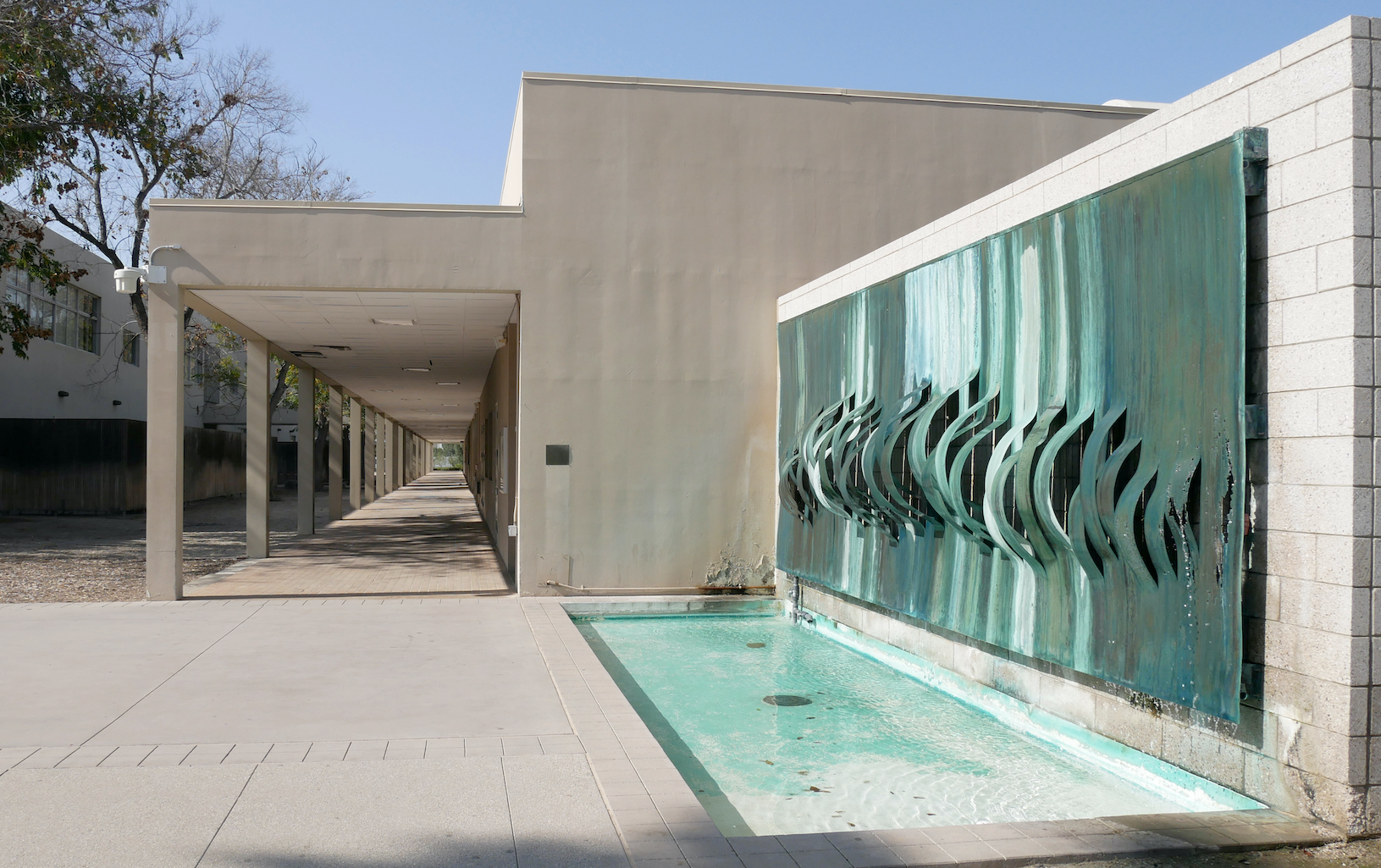 Some of the older sculptures on the university’s campus date back to 1965, such as Shoji Matsumoto’s piece, “Five Untitled Sculptures,” and Claire Falkenstein’s piece, “Game Action.” CSUF art professor Victor C. Smith, also known as Joachim Smith, went to Japan in the summer of 1964 on sabbatical leave. It was there that “he found an art world torn between centuries of tradition and the pull of postwar modernism,” according to the Department of Visual Arts Sculpture Collection webpage. “The art establishment, which controlled the country’s museums, galleries, and civic art institutions, represented tradition. The modernists and their patrons, who found little support in the mainstream, grouped their strength in newly formed art alliances. They worked and exhibited their art apart from what they called ‘officialdom.’ This movement, which had gained international attention, intrigued Smith.” He visited a group in the northern outskirts of Kyoto. That group had built “simple, but ingenious shelters for themselves and their novel work on a lush strip of wooded land.” Smith described the enclave as an “artist’s hamlet,” and the artists saw it as a “refuge from official antagonism and indifference.” Back in the U.S., Smith assembled an exhibition, “Seven Artists from Kyoto,” for the CSUF campus that ran from November through December of 1965, before moving to San Diego State in March 1966. Shoji Matsumoto, one of the Kyoto seven, produced five steel sculptures for that show and gifted them to CSUF. Those sculptures are now located in a small sculpture garden between two buildings in the Visual Arts Center.

Installed in the summer of 1965, “Game Action” was specifically designed for the wall above the entrance to what was then CSUF’s gymnasium and is now the Kinesiology and Health Science Building. Falkenstein’s abstract sculpture was funded as part of the construction cost of the gym and was made out of copper tubing and colored glass. According to a 2008 Daily Titan article, “The chaotic shapes of the piece’s seven distinct sections are meant to symbolize the powerful release of pent-up energy and emotion expressive of athletes in action.”

Each of the 35 pieces in CSUF’s outdoor sculpture collection have their own unique origin story and history. To find out more information about the different sculptures on the university’s campus, check out the alphabetized list of CSUF Outdoor Sculptures at http://calstate.fullerton.edu/news/inside/Sculpture/index.html#A and learn more about the Department of Visual Arts sculptures at http://www.fullerton.edu/arts/art/sculpture-collection/sculpture-coll-2.php#divJ. To see the “Liquid Art” Road Trip with Huell Howser episode with the segment featuring CSUF’s Wall Gazing Gallery, check out blogs.chapman.edu/huell-howser-archives/2002/09/09/liquid-art-road-trip-with-huell-howser-114-2/.