A new electric power utility entity, the Orange County Power Authority (OCPA), was formed in December 2020. Irvine is footing the bill for startup costs and Fullerton joined as a founding member. The cities of Huntington Beach and Buena Park have also joined. Lake Forest originally joined, but recently withdrew as their city council continues to weigh the merits of changing to this new power structure.

Fullerton City Councilmember Fred Jung is currently the Vice Chair of the Board of Directors of OCPA. The newly formed organization is attempting to get more cities to join and is working to establish itself fully by next year under a model called community choice energy/aggregation (CCE or CCA). Under this model, power will be purchased from a variety of sources with the goal of increased renewable energy, competitive rates, and local programs to address communities’ diverse energy needs.

Southern California Edison (SCE)  will continue to distribute the power through existing poles and wires. However, the sources of power generation will be managed by OCPA.

A key element of this new model is consumer choice. Individuals, businesses, and cities will have the option to stay with SCE or go with OCPA.

The Development of OCPA

In 2018, the city of Irvine funded and conducted a feasibility study on creating a CCA (community choice aggregation) in Orange County. Their study indicated that it could save $7.7 million per year in citywide electricity costs for residents and businesses and $112,000 for the city of Irvine itself, and potentially other environmental and social equity benefits.

In 2019, Irvine reached out to other cities to consider joining a “joint power authority,” which ultimately became the OCPA, formed in 2020.

Initially, OCPA will be contracting with third party vendors to do some of the specialized work involved, such as purchasing power and managing customer accounts. The organization is planning to begin offering power by April 2022. Customers living in member cities may choose to stay with SCE, otherwise they will be automatically enrolled in the new OCPA program. A Citizens Advisory Group to address public questions and concerns is expected this summer.

Since its formation in December 2020, OCPA has established a Board of Directors composed of councilmembers from the cities involved. They established an implementation plan and hired CEO Brian Probolsky and Chief Operating Officer Antonia Castro Graham.

Probolsky has been employed in various local government jobs, including board president of the Moulton Niguel Water District, at OC Waste and Recycling, and as former chief of staff to OC Supervisor Andrew Do.

Castro Graham has worked at the Metropolitan Water District as Sustainability Project Manager in Huntington Beach, and most recently as Deputy City Manager in Fullerton. She teaches courses on environmental sustainability at CSUF and Cal Poly Pomona.

In 1997, when California deregulated the energy market, many Californians switched to alternative energy providers. Following the energy crisis of 2000-2001, consumer choice of electricity providers was suspended.

In 2002, in response to the energy crisis the state legislature passed Assembly Bill 117, which outlined the steps that must be taken to form a community choice aggregation and laid out how CCAs would be regulated and coexist with the local investor-owned utilities (IOUs) like Edison.

In 2010, Marin Clean Energy (MCE) became the first CCA in California. Since that time, 23 CCAs have been created throughout the State, and they serve over 11 million customers. The most recent CCA is San Diego Community Power, which launched in early March. To learn more about CCAs in California visit www.cal-cca.org. 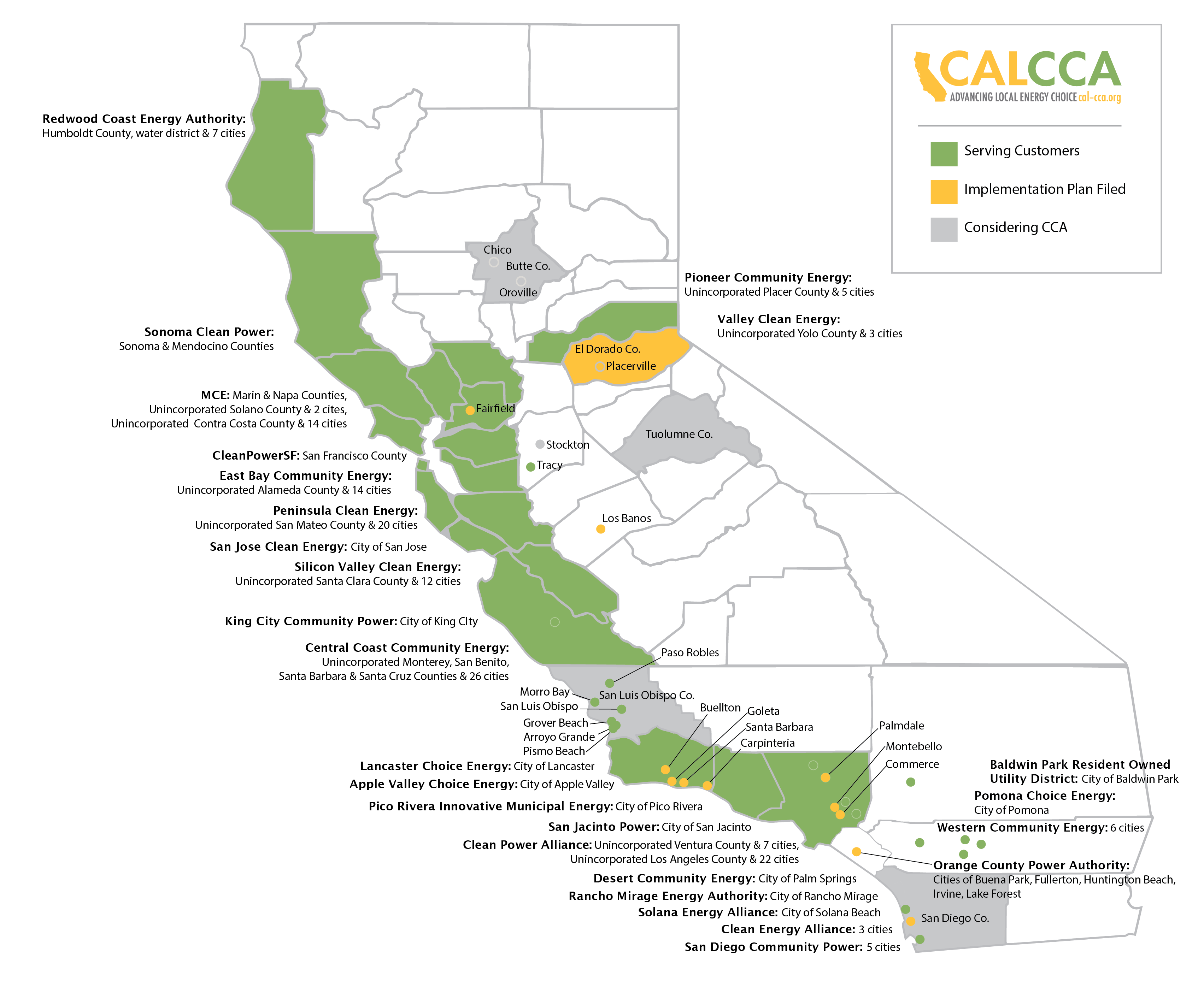 Map of CCA/CCEs in California.

A Conversation About Community Choice Energy

To learn more about the newly-formed Orange County Power Authority and community choice energy, The Observer spoke with Board Vice Chair Fred Jung, Chief Operating Officer Antonia Castro Graham, and Jose Trinidad Castaneda (from the nonprofit Climate Action Campaign). Here are excerpts from these conversations, edited for length and clarity.

One of the main roles of OCPA is buying power. How will that work?

Graham: Your current bill from Edison has two components—distribution and generation. Edison doesn’t generate their own power—they’re also buying it [from third party generation companies like solar, wind, natural gas, etc.] but they’ve entered into a number of long-term power purchase agreements. We will also have to enter into long-term power purchase agreements to meet renewable energy goals set by the state of California to get to the goal of 100% renewable by 2045.

Castaneda: Edison has long-term legacy contracts with their power providers from ages hence. Most of them are natural gas. New community choice energy [CCEs] like OCPA, can compete with Edison because we’re negotiating new contracts with cheaper renewable energy suppliers. It’s cheaper to buy renewable energy in bulk for leveraging economies of scale by bringing in multiple cities.

How can you ensure that this won’t create another Texas situation, or a situation like the energy crisis of the early 2000s?

Graham: The California Public Utilities Commission (PUC) would never allow that. We are so regulated. You have California Independent System Operator (CalISO) that controls the grid—they’re not going to let anything happen here like what happened in Texas. Texas also didn’t weatherize their grid, despite the legislature telling them to do this. So, under community choice energy, we have choice, but with regulations.

What are the benefits of a CCE, compared to the current system with Southern California Edison (SCE)?

Graham: I think that at the end of the day there’s something in this for everyone. There are three E’s to sustainability: They are economy, environment, and equity (people). You have the ability to have consumer choice. Another advantage of CCEs is equity. You have the ability to create programs that are tailored to your community, including programs in disadvantaged communities, as opposed to an investor-owned utility that is creating programs for the entire service area.

Castaneda: Right now, you’re a customer of SCE and that’s it. There’s no choice—you’re just under the monopoly system of Edison, which charges you for both generation and distribution. If you were to be with OCPA and buy power from a CCE program, you would have choice.

Jung: Also, check out San Diego Community Power. They’re now up and running. With San Diego, you can see the rates and compare in real time the rates you’re paying with Edison. You can look at it and see the cost savings involved.

How will this help fight climate change?

Jung: I can’t force Fullertonians to stop eating hamburgers. I can’t force Fullertonians to not drive a gas car. CCE is one of the things we can do to really have a positive effect on climate change at the local level. Time’s not on our side here. The clock’s been ticking for an awfully long time, and we’ve just kind of delayed it and talked about it, discussed whether it’s real or not. I’m excited that this is something we actively want to do as a city, and we move forward accordingly.

Castaneda: I see climate change as an existential threat, one of the most important issues of our time. Climate Action Campaign is a non-profit climate watchdog organization that was founded in 2015 with the mission to stop the climate crisis through bold climate action plans—through a City’s roadmap to a zero carbon future, as well as through CCE, which is the fastest way to accelerate to a clean-energy future. Those are really the two most powerful tools that city councils have at the local level to fight climate change.

State law already mandates the move toward renewable energy with set targets. How is CCE better than what is already being mandated by state law?

Jung: When you look at what’s practical, government always does the least stretching of what the envelope will do. CCE is stretching that envelope, moving things faster. If you believe climate change is the existential threat of our lifetime, moving faster is only a good thing.

OCPA needs to achieve a certain size/number of member cities to be able to achieve the kind of savings through economies of scale. Are we close to that?

Jung: I think we’re going to get there, and this is a pretty easy win for everybody. What’s interesting is that this goes across party lines. Politics is so partisan these days, but this is something that conservatives like just as much as progressives do. They like the fact that there’s choice involved. They like the fact that this involves the free market working. So, I am convinced that this will become something much greater than what we’re discussing right now. I think within a handful of years, this will be just the norm, for all of us.

It seems like SCE might not be in favor of this change. Do you foresee them trying to stop it?

Castaneda: SCE are going to be partners. The California Public Utilities has a code of conduct, and they created this to tell all the investor-owned utilities (like SCE) that they can’t take a position for or against CCE because they’re a direct competitor to their energy supply/generation charges.

Jung: Just think about what we’ve gone through in the last 15 years with the coal industry. Coal was at one point this country’s leading energy provider. But over time we got smart and climate advocates told us “no,” we’ve got to do a better job. And now we’re moving away from that. But think how much the coal lobby and the vested interests in coal pushed back on that. So, we’re going to get folks who are against this, which is reasonable, and I would expect that. But the role of anybody who is doing something new is to make sure that, 1) You’re serving the public in a meaningful way, and, 2) Drive public opinion forward so customers understand the importance of this not only from an environmental perspective, but from their own pocketbook. I urge those who have concerns to look at what other CCEs have done—San Diego, Silicon Valley, etc. These groups are on the forefront of this and I’m excited as an elected official in Fullerton that one of the oldest cities in Orange County is taking a leadership role to be really forward-thinking.

What are some of the biggest challenges you’ve faced in getting cities and people to support this new entity?

Graham: I think the biggest challenge is that we live in a culture of misinformation. The hurdle we face is getting the accurate information out there. Therefore, it’s important that we have advocates who talk about the three E’s of sustainability. And that means educating as many people as possible. It’s talking to you, going to the Rotary club, going to schools, going everywhere we can. But we live during COVID, which makes it harder to fight the misinformation. I’m a big believer in transparency and communication because if we’re not transparent and don’t communicate, it leads to gossip, rumors, and misinformation. So, it’s super important that we communicate with the public.

What kind of public outreach have you already done or do you plan on doing?

Graham: If you want to hear from us, we’ll come to your group. We want to come to your HOA, your Rotary Club, your Kiwanis, and just hear us out, you know? You don’t have to agree with us, but just get the correct information.