Filmed in Fullerton: Movies Made on Location

I’ve always been fascinated with films, especially the production process behind them. It’s interesting to find out where the films you’ve watched were actually made. Following Observer reader Linda Henke’s suggestion, I decided to look into a history of movies shot on location here in Fullerton, from long ago to present day.

According to writer Jim Sleeper’s research in his book, Great Movies Shot in Orange County, “no fewer than five hundred films, ranging from comic shorts and newsreels to full-length silents and even a few talkies” were made in Orange County between 1910 and 1930. On a local level, one of the first movies that the Fullerton Public Library’s Local History Room has a record of dates back to 1923.

According to a January 3, 1923 issue of the Fullerton News Tribune from the library’s archives, the movie “Her Fatal Millions” concluded filming at the old Santa Fe train station. The film played at the Rialto Theater in Fullerton later that year. Interestingly, the film’s depot scenes were shot here in Fullerton because the producers and director wanted an old-style station that fit with one of the scenes written in the screenplay.

Cheri Pape, Local History Archivist at the Fullerton Public Library, mentioned that the Fullerton train station has been used briefly in many, many films. In fact, when my parents and I were watching Turner Classic Movies the other night, we saw a train station in the Doris Day/Rock Hudson film, “Send Me No Flowers,” that looked almost exactly like Fullerton’s Santa Fe depot. 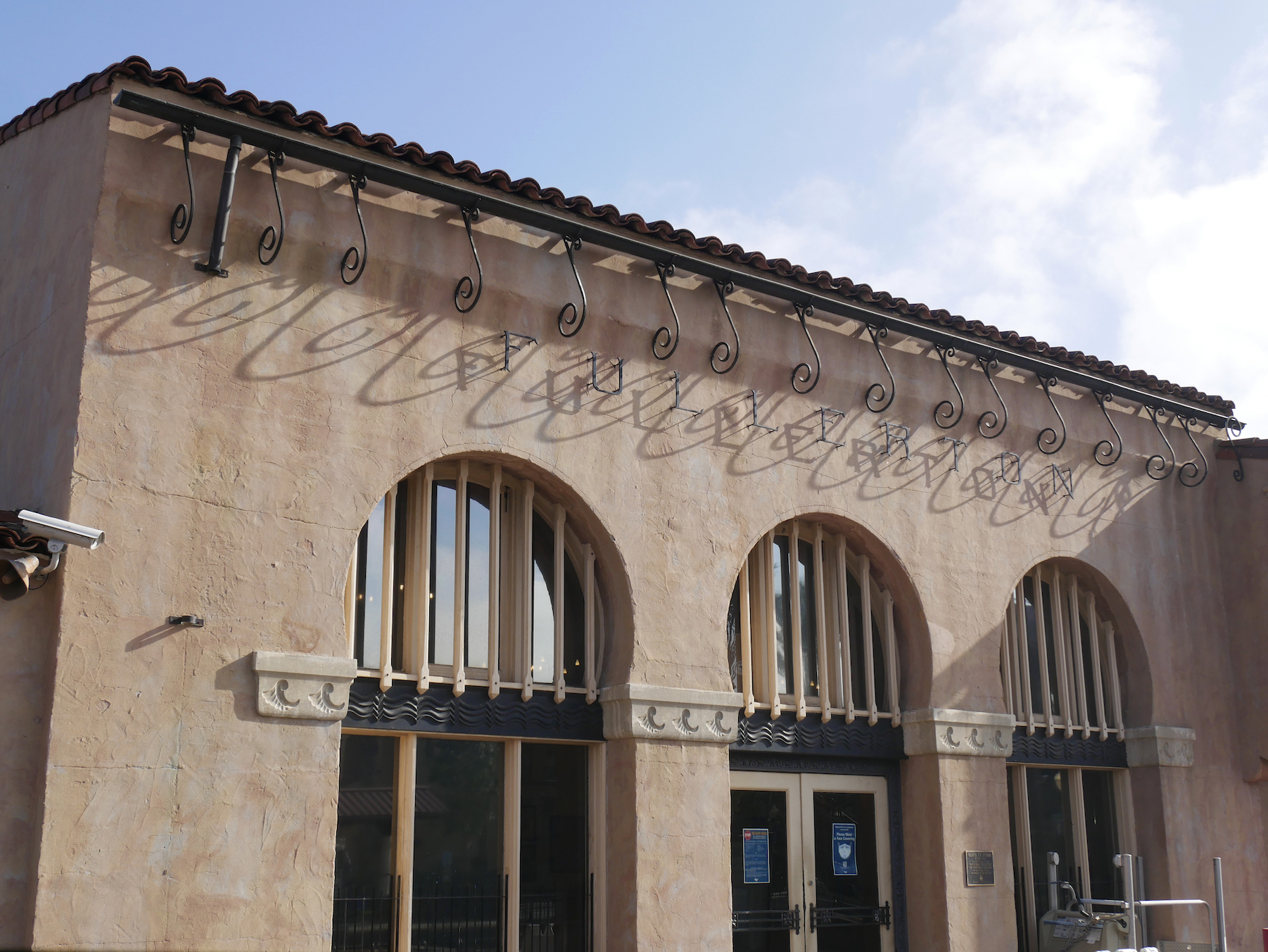 The Fullerton Santa Fe Train depot has been used as a filming location for many movies.

Jumping back in time to 1927, Fullerton was transformed into a little Mid-western town by the name of Lonsdale. For the filming of scenes for “Trail of ’93,” a Metro-Goldwyn-Mayer special, the City’s identity was changed to that of a village in the year 1898. Once again, the City’s Santa Fe station was used as a backdrop. The scenes filmed in Fullerton featured “the departure of a group of the town heroes for the Klondike. The entire populace was out to bid them goodbye. There was the pompous mayor in frock coat and tall silk hat standing on a platform and assuring the adventurers that the good wishes of the entire town followed them.”  The byline of the article documenting the filming in the July 7, 1927 edition of the Fullerton News Tribune read, “Best Thing Movie Folk Do is Wait, Observers Discover,” because locals who witnessed the filming of the scenes all agreed that making moving-pictures is mainly a process of waiting. The actors arrived on location at about eight o’clock on the morning. A Santa Fe engine and old style observation cars arrived soon after, but not a single shot was taken until almost noon.

On January 20, 1928, the Fullerton News Tribune reported that the City’s picturesque old Santa Fe station provided “atmosphere” for another motion picture production, this time used by Universal Studios for an early morning scene, with filmmakers bringing several large busses and a fleet of trucks and smaller cars transporting extras and equipment. The film itself isn’t mentioned by name in the article, but this is yet another example of a film production company using the Fullerton train depot to pose as a movie setting.

In 1935, the baseball film “Alibi Ike,” with Joe E. Brown—movie comedian and baseball fan—“heading a cast that includes big league baseball players,” made use of the Commonwealth park baseball field, according to a March 3 edition of the Fullerton News Tribune. Directed by Ray Enright, Alibi Ike features Brown as a brash Chicago Cubs rookie hurler who’s always ready with excuses for his mistakes. At the time, the film’s producers “extended an invitation to the general public to see movies in the making and serve as the grandstand crowd for the film,” offering free admission to the ballpark in order to try to convince Fullerton residents to “stand-in” as extras. However, rain delayed the film company’s plans. 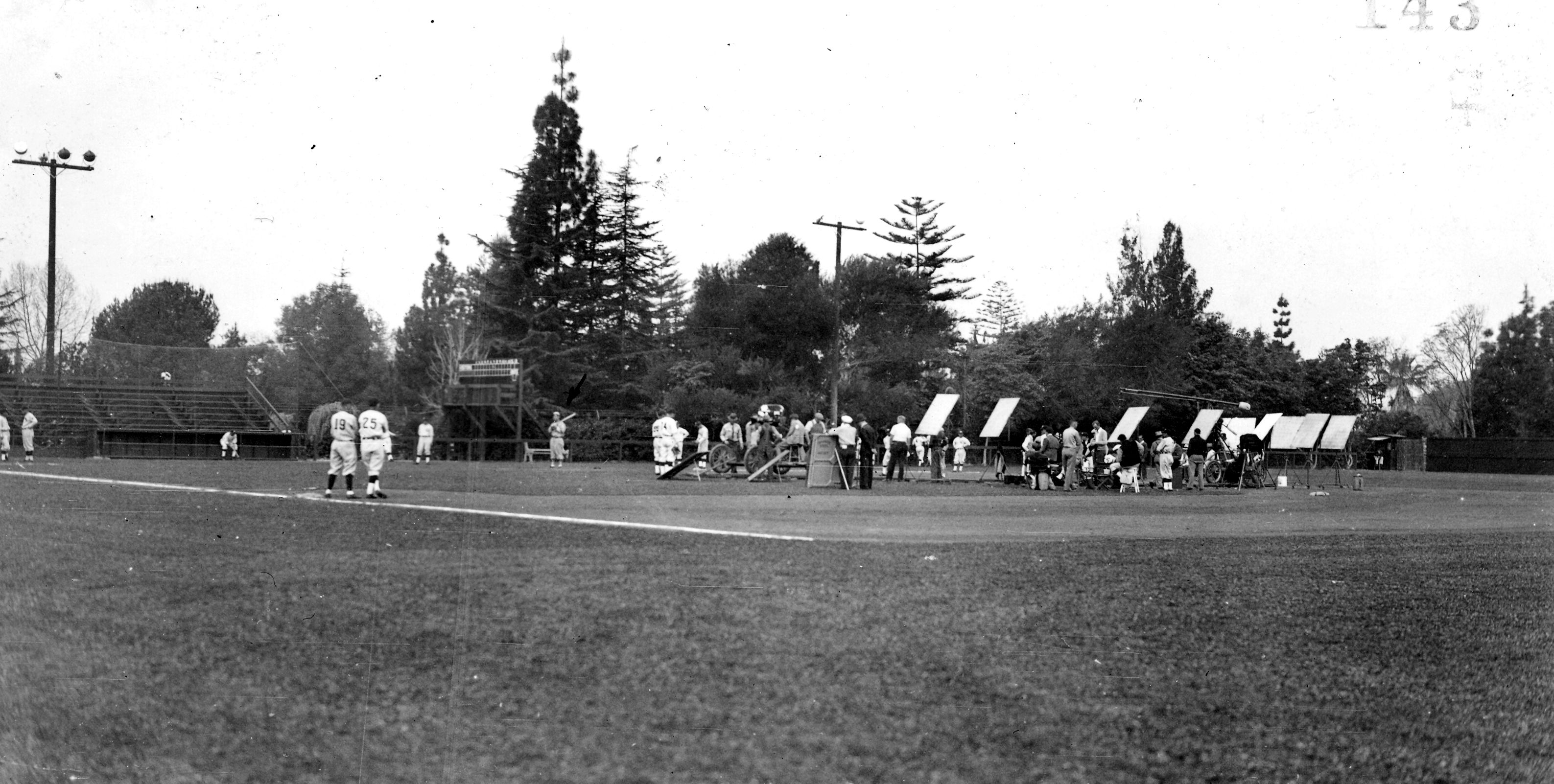 March 4, 1935 marked the first day of Fullerton spring training camp that year for the Sheiks at Commonwealth park. According to the Fullerton News Tribune, “the ballpark was lined with trucks and equipment from Warner Bros.” There were reports that Joe E. Brown was ill with “flu,” which may have been another reason for the production schedule delay, along with the weather. It turned out that Brown was kept in bed for influenza, but he made it out to Commonwealth park on March 10, to watch the game between the Hollywood Sheiks and Los Angeles Angels. He was eventually well enough to resume filming and shooting continued until it was completed on March 30, 1935. 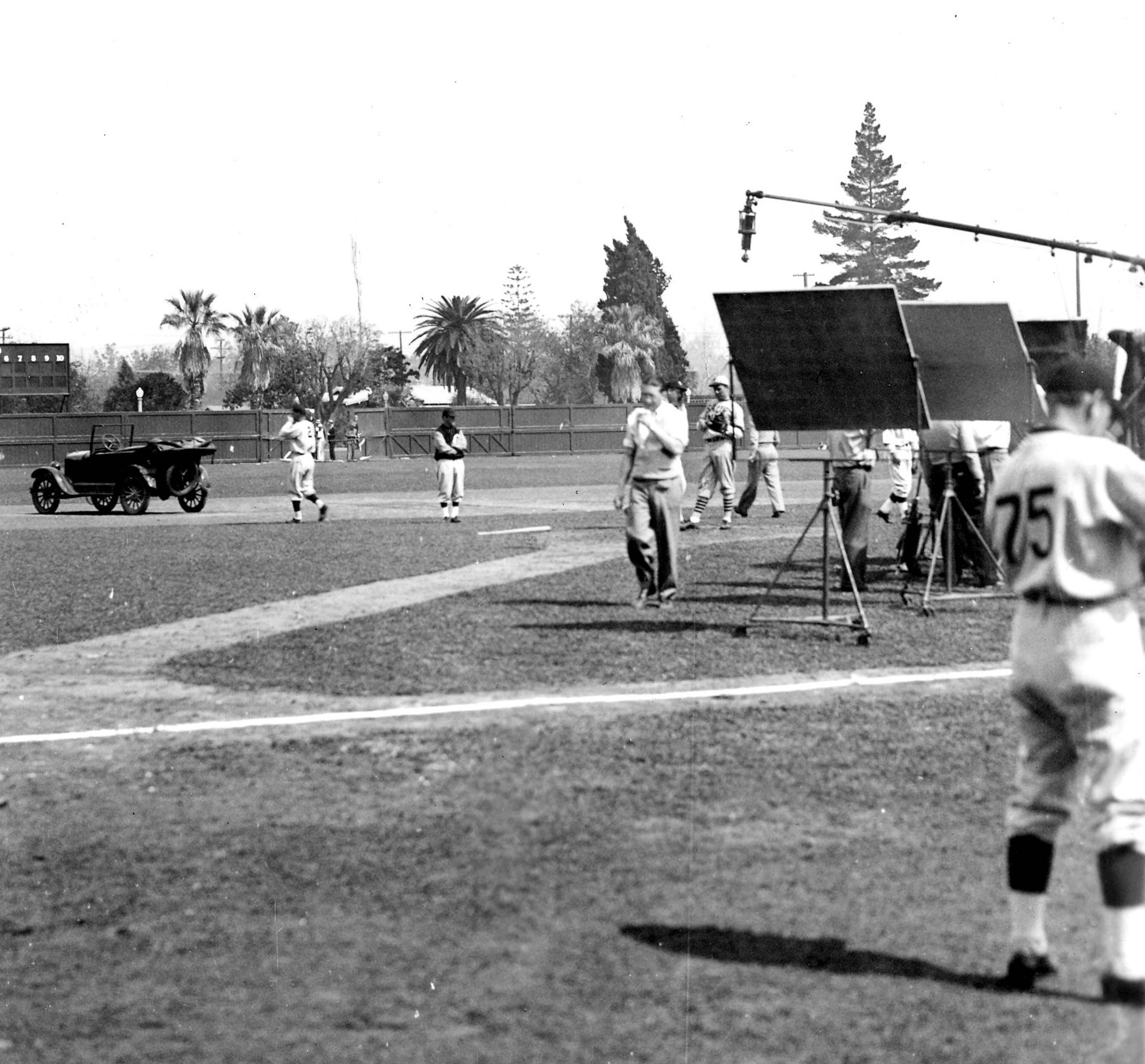 According to IMDb, there are 176 movie productions listed under the filming location of Fullerton. Quite a few members of the current Observer staff remember “The Purple People Eater” filming at locations around the City’s downtown area. In fact, according to the August 1988 issue of the Fullerton Observer, Purple People Eater Productions employed former Fullerton resident Linda Shayne, who was also a 1974 graduate of Sunny Hills High School, to direct the film. At the time, according to then City Public Information Coordinator Sylvia Mudrick, “Linda wanted to come back to her hometown, and the exorbitant fees that other cities were asking made that very economical.” 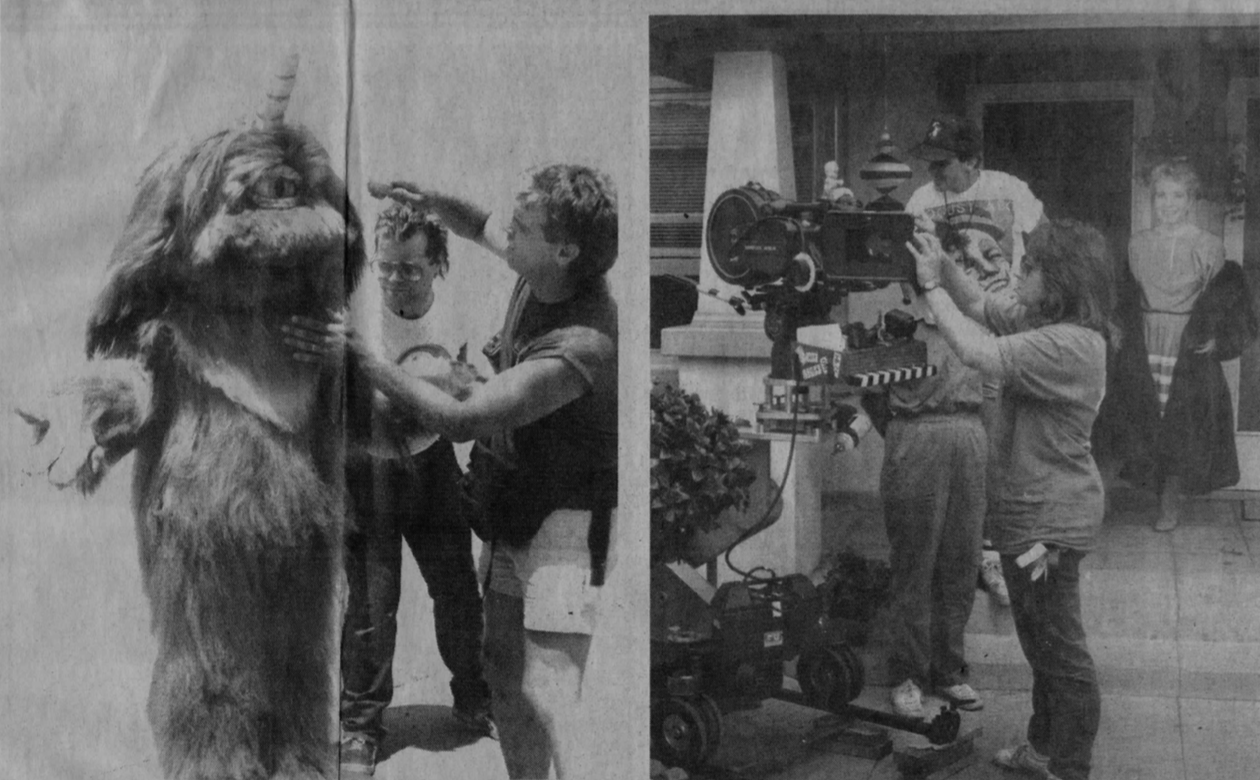 Behind the scenes photos from the filming of “The Purple People Eater.” Courtesy of the Fullerton Public Library Local History Room. Originally published in the Fullerton News Tribune.

“The Purple People Eater” was also written by Shayne and told the story of a Purple People Eater who comes to Earth to form a Rock N’ Roll band and develops a friendship with a boy (played by a young Neil “Patrick” Harris) and the boy’s grandfather (Ned Beatty). The movie’s stars included Shelley Winters, Peggy Lipton, Thora Birch, Chubby Checker, and Little Richard, among others. 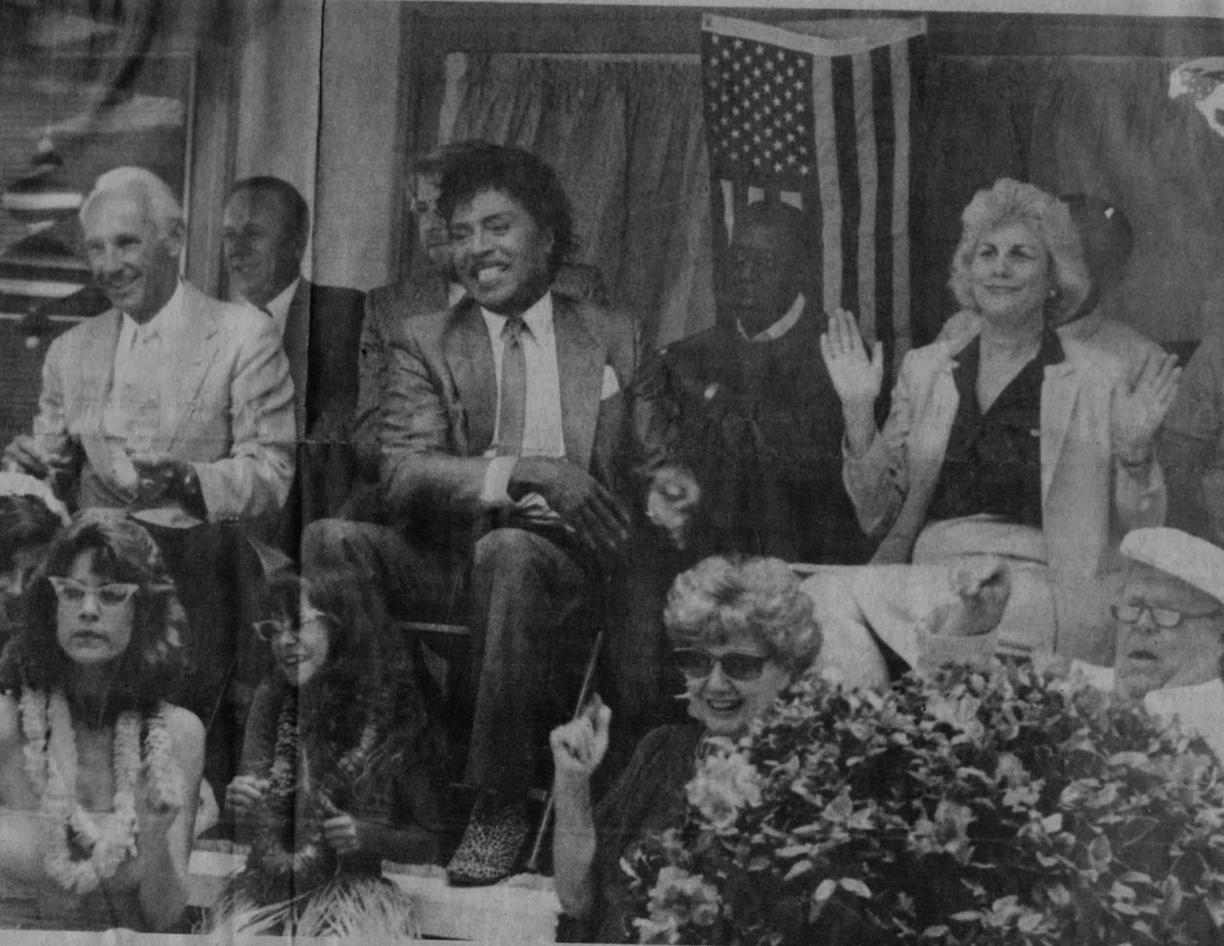 Behind the scenes photos from the filming of “The Purple People Eater.” Courtesy of the Fullerton Public Library Local History Room. Originally published in the Fullerton News Tribune.

“The Purple People Eater” was based on the hit novelty song of 1958 by the same name; the song’s original writer-performer Sheb Wooley appears as a trapeze teacher in the movie. Fullerton civic leaders at the time also got into the act, including Councilman A.B. ‘Buck’ Catlin, Development Services Director Paul Dudley and Councilwoman Molly McClanahan. What’s interesting is that the production company, in search of a suitable location for the 1950s apartment scenes, checked out some of Fullerton’s historical sites, and settled on a well-kept, but older apartment court complex on North Pomona. Scenes were also shot at the Fullerton Car Wash on Harbor Boulevard and at Sunny Hills High School.

Shayne told the OC Register that Fullerton projects a ‘50s-like quality of “innocence,” a feeling that it’s “safe to walk at night.”

In February of 1988, “Tunnels,” a movie starring Catherine Bach and Charlene Dallas, also filmed in Fullerton. The production company was attracted to the City because Fullerton didn’t charge filming fees at the time. The comedy-adventure movie revolved around two female newspaper reporters who stumble onto underground tunnels and a sinister plot. The Chapman Building, Melody Inn, Villa del Sol, Hillcrest Park, and the building that housed the Sarah Bain Gallery at the time, were the locations used for the film, which all happened to be located on Harbor Boulevard. 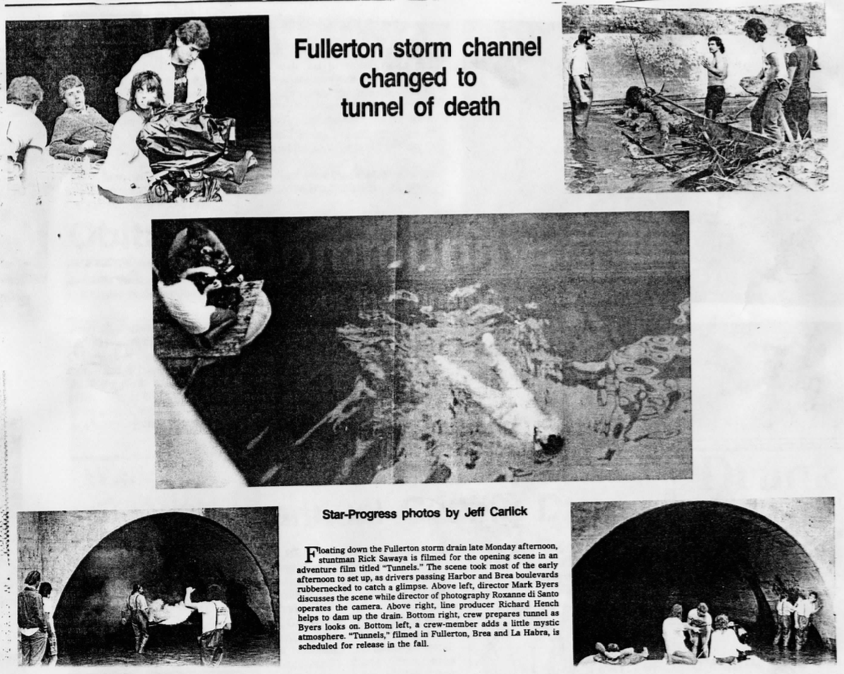 Observer copy-editor Terry Hendricks remembers that when she taught at Fullerton High School, a fellow teacher in her department had made the movie “Dreamrider.” Hendricks said via email, “When I taught at FUHS, Bill Brown talked about making his movie Dreamrider and how he had used the high school campus in filming it. James Earl Jones was in the movie, along with several teachers in the social science department.”

“Evolution,” a science-fiction film that starred the X-Files’ David Duchovny and was directed by Ghostbusters’ Ivan Reitman, used Cal State Fullerton’s campus to stand in for an Arizona Community College.

In 2016, Fullerton’s 1950s-esque setting provided a nice backdrop for the filming of the Coen Brothers/Clooney film “Suburbicon,” which was shot over on Ash Avenue. Fullerton residents watched as director George Clooney and stars like Matt Damon and Julianne Moore filmed their scenes on Ash Avenue, a street that was selected due to lack of trees, which the City had removed the previous year because of sewer and sidewalk issues. The filmmakers also liked the neighborhood because quite a lot of the houses were built around 1959, the time period in which Suburbicon was supposed to take place. The Observer ran extensive coverage of the filming, which was written about both in Mike Ritto’s column, and David Spargur’s and Kandra Kargo’s article in the early November 2016 issue of the Observer.

More recently, in fall 2018, Netflix used the Fullerton Union High School campus for its production of the show “The Politician.” I remember driving by Angelo’s and Vinci’s with my dad and seeing the film production working in the distance with big crew lights. At the time, the Fullerton High School sign was replaced with the sign for “St. Sebastian High School” for the Netflix production.

As Mike Ritto wrote in 2016, “Fullerton is the place to be for filming, in more ways than one.” So, the next time you spot unusually expensive-looking lighting and camera equipment being loaded out of a bunch of vehicles parked together in one location, you’re probably looking at a film production scheduled for a shoot in Fullerton.