What Do Beer, Oysters, Salt, Air & Tap Water Have in Common? 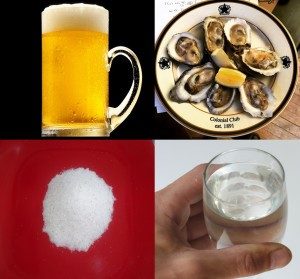 It was just two decades ago that the Great Pacific Garbage Patch, a vast circulating accumulation of plastic debris in the North Pacific, was discovered by accident. Since then, plastic pollution has been found to be ubiquitous in natural environments worldwide, including the open waters and sediments of oceans, lakes and rivers and even in soil and air.

It’s no wonder then that the tissues of wildlife as diverse as whales, seabirds, fish and zooplankton, all which ingest plastic debris, are polluted by plastics. Given that, it would be naïve to think that humans, who share the same global environment and eat at the top of the food chain, are somehow spared contamination.

Though no one has yet measured how much plastic pollution humans might be carrying around, there is plenty of evidence we’re taking the stuff in, by eating, drinking and even just breathing. This is frightening to contemplate because plastics carry potential health risks associated with chemicals both manufactured into them and later picked up from the environment.

Plastics for Dinner?
Discovery of seabird and whale carcasses chock full of visible plastic waste sparked concern that sea creatures consumed by humans might be imbibing plastics too. The broad picture emerging from a plethora of research is that plastic debris is being taken up by sea life throughout the ocean food web, including tiny fish that feed on plankton, fish that feed on smaller fish, shellfish, turtles and dolphins.

Concern about the possible impact on humans is heightened by the realization that most plastic in the ocean is likely invisible to the naked eye. Synthetic plastics are highly resistant to bio-degradation though they do break apart in the environment into ever smaller pieces, eventually reaching millimeter and nano-scale dimensions, so-called microplastics. The potential for ingested microplastics to transfer up aquatic food chains is very real, as demonstrated by transfer from the tiniest to larger zooplankton and from mussels to shore crabs.

That fish and bivalves sold for human consumption at fish markets around the globe can contain plastic debris is proof enough that plastics are making their way onto our dinner plates. Humans eat the entire flesh of bivalves, and there is growing concern that microplastics in the guts of fish can transfer to their flesh.

But plastics are also showing up in less obvious places on the dinner table.

A study published in Environmental Science & Technology found that 36 of 39 brands of table salt brands from 16 countries/regions around the world, including the United States, contained tiny plastic particles. Sea salt was typically more contaminated than rock and lake salt.

A stunning analysis of tap water from five continents by the journalistic non-profit Orbs Media found that over 80 percent of city samples contained plastic microfibers thought to emanate from synthetic textiles. The U.S. samples fared the worst: 94 percent were contaminated, averaging about five plastic bits per pint.

Perhaps most surprising is the finding of University of Minnesota researchers that all 12 sampled brands of beer produced in the Great Lakes region contained microplastics, averaging four particles per liter. That the beer sometimes had more plastic than the lake water it was made from suggests additional plastic was introduced during manufacturing. 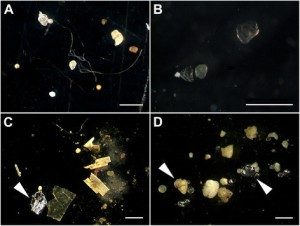 A number of scientists have been assaying different food sources to get a handle on how much plastic a person might be taking in. One study estimated that consumers of shellfish could be eating 11,000 microplastic particles annually. Another looked at beer, tap water and table salt and estimated an average yearly consumption of 5,800 from those sources.

Plastics might look inert, but they’re not. Both the chemical building blocks of the polymer and the myriad of proprietary additives mixed in to create desired properties can be dangerous to health and can migrate out into the environment or animal tissues. Plastics also pick up toxic chemicals from seawater. We now know that consumption of plastics by fish allows transfer of pollutants to their tissues.

A just released report of human feces containing microplastics is hard-to-deny evidence of human exposure. However, the risks specific to humans are still hypothetical, though scientists are honing in on the disturbing fact that when degraded plastics eventually reach nano-scale dimensions, similar to the size of viruses, they too can penetrate the lung and gut and reach vital organs via the circulatory or lymphatic system.

How is plastic getting into everything?
Global synthetic plastic production has increased more than 10-fold since 1970, with no leveling off in site. According to a 2018 accounting by the United Nations, less than a tenth of the nine billion tonnes of plastic ever produced has been recycled, most ending in landfills or amassing in the environment. Littered plastics tend to accumulate in bodies of water and on shorelines where they continually degrade into smaller fragments. 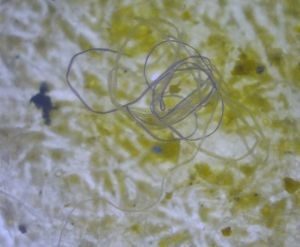 Microfibers sloughed off from synthetic fabrics during routine laundering are another major source of microplastics pollution. Water treatment plants were never designed to remove microplastic particles so they are retained in treated water which is discharged into oceans, lakes and streams or onto landscapes and farmlands for irrigation. Sewage sludge is also awash in microplastic debris and contributes to buildup of microplastics in soil when it is used to fertilize fields.

Air is contaminated also, by microplastic fibers that slough off during normal abrasion of clothing, upholstery and carpeting. And, we’re not just breathing them in. A highly disturbing implication of a study of microplastic contamination of wild mussels is that humans likely consume far more microplastics from the dust that invisibly rains down on their meal than from the food itself.

The solution?
Humanity ushered in “The Age of Plastics” over a half century ago and is enjoying previously unimaginable conveniences as a result. But, we’ve also unknowingly created a monster: the invisible microplastic contamination of the global environment. We are just now starting to glimpse what this unseen threat means to our own health and that of other lifeforms.

A global problem of this scale requires sweeping reforms in mankind’s relationship to plastics, and the European Union is taking the lead. Its Parliament just voted a union-wide ban on common single-use plastics, including cutlery, plates, straws, drink-stirrers, cotton swabs and balloon sticks. Plastics also need to be re-designed so they are made from sustainable, non-toxic, biodegradable and easily recycled materials.

Despite the current gridlock in the American political system, Congress enacted a ban on plastic microbeads in cosmetics and toothpaste in 2015. Governments will act if enough people speak up.

Individuals participating at the local level by urging adoption of sane restrictions on plastics is key to awakening the public and our legislators to the urgent need to address microplastic pollution. Recall how the passage of single-use plastic bag bans in dozens of jurisdictions across California spurred voters to endorse the initiative which enacted a statewide ban. Get involved.

Read more of Dr. Mosko’s writings on her website at www.boogiegreen.com 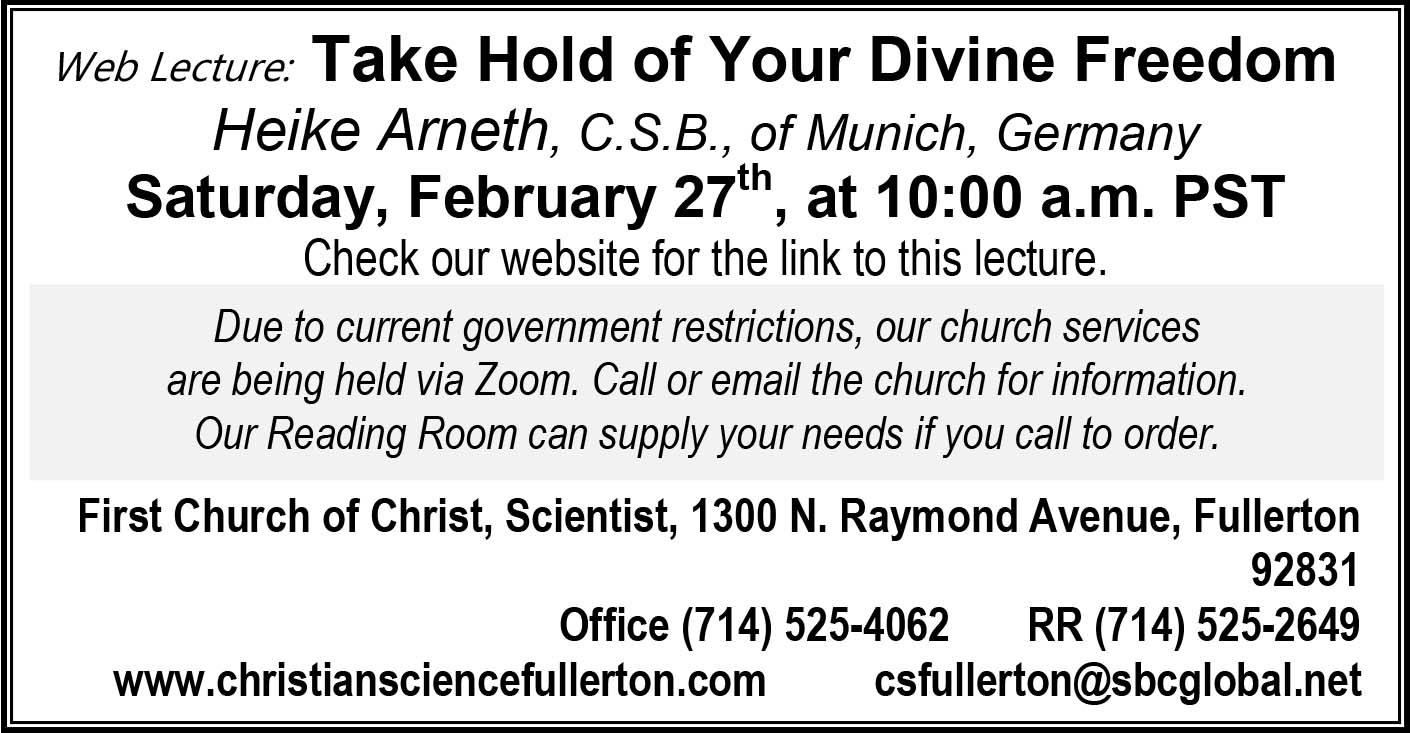