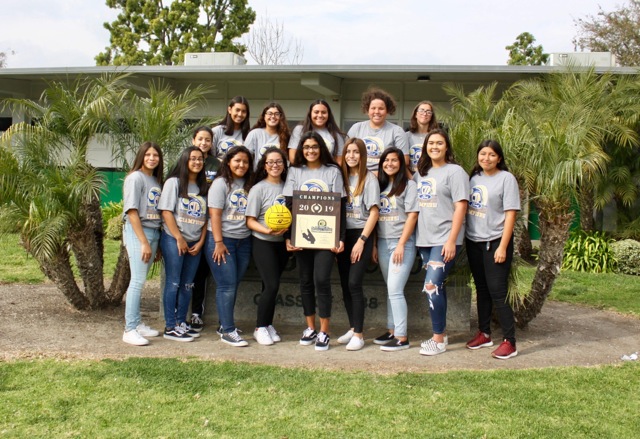 The Coyote Girls Water Polo team went to Anaheim knowing that one win stood between them and the championship.  The team faced a squad from West Torrance.

Very early on, the game went a bit sour for the Coyotes as the Torrance girls scored on their first advance on offense about 30 seconds into the match.
However, Buena Park recovered quickly, scoring on their own first drive, to tie the game at  one each.

For the faithful Coyote fans in attendance, decked out in green and holding lit-up signs that encouraged “their” girls, the match became a somewhat comfortable affair into the end of the first half.  Buena Park’s team scored a second, and a third, and then a fourth and a fifth goal to raise the score to 5-1 before the two teams traded goals for a halftime score of Buena Park 6, West Torrance 2.

The third quarter put a mild scare into the Coyote crowd, because West Torrance scored two goals to make the score 6-4.
Then the fourth quarter became fun for Buena Park High School fans. Two goals by the Coyotes made the score 8-4. The fans started to hope that the girls could hang on to the lead.

Quality play had put the Buena Park High School girls into that position. Going into the CIF playoffs, the Coyote ladies had created a 20-win season against only seven losses. These players and their coaches worked very hard in and out of the pool and at every practice tirelessly striving to achieve success. The team left the pool at Anaheim with the champion plaque in their collective arms.

The players shared how they came to play for the team and explained the fondness they found for this particular squad of champions. Senior Veronica Alatorre remembers, ironically, “Well I joined water polo mainly because my friends made me do it, but there is not one day that I have had regrets.”

Team goalie Vanesa Navarrete started playing water polo as an incoming freshman and finished her high school career with four years of experience.  She said, “I love swimming and being in the water, so this game was a perfect fit for me.” The senior Coyote added, “I also like that it is a team sport so, whether we win or lose, it’s together.”

The girls won it together but that rise to the top did not come without significant determination. Senior Jasmine Garcia, one of the team’s prolific shooters and stealers, reflecting the teamwork that might just have put them into the playoffs, said, “While playing the game, the main thing that goes through my mind is, ‘What can I do to help my team?’”

All the players expressed their excitement and sentiment about the effort of the team and the work that paid off in the form of historic successes that they achieved this season.

The team has realized its goal with the guidance of the co-head coaches and the help of Assistant Coach Aracely Juarez.
Head Coach Shane Lafortune said, “This program the past three years hadn’t won more than eight games. Not so good when you play over 28 games a year. These girls were used to losing and didn’t really feel like they were good enough. But, as the season progressed, they started to realize how good they were.”
Co-Head Coach Ted Clark praised the individual team members who have made a great contribution toward the team.

Principal Berg described his feelings about the team’s effort and what it means for female sports on the campus. “The Girls Waterpolo CIF Championship was a proud moment for me as a principal.” 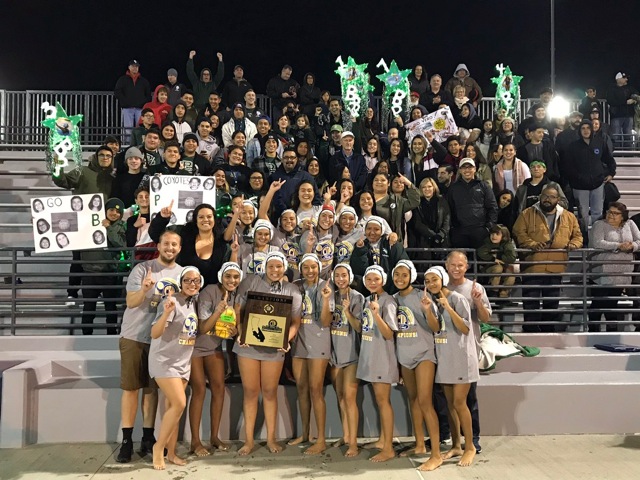