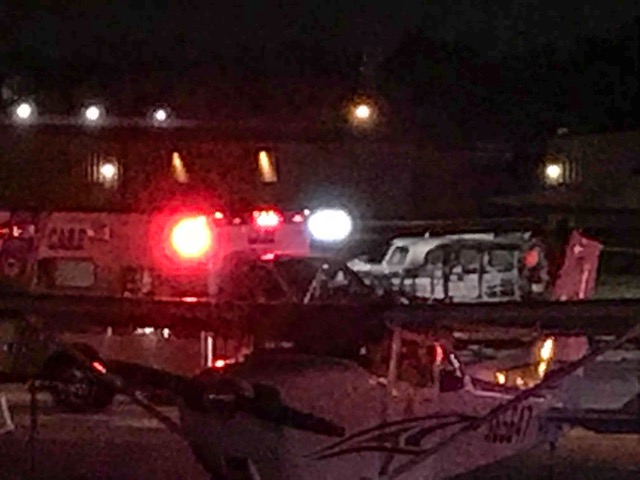 The pilot of a twin engine airplane died in a fiery crash on takeoff at the Fullerton Municipal Airport Thursday night, April 18.

Firefighting units from Fullerton, Anaheim, and the Orange County Fire Authority responded to a 7:51 p.m. report of a crash on one of the runways, arriving just six minutes later to find the plane engulfed in flames. The odor of the fire was carried at least two miles eastward. 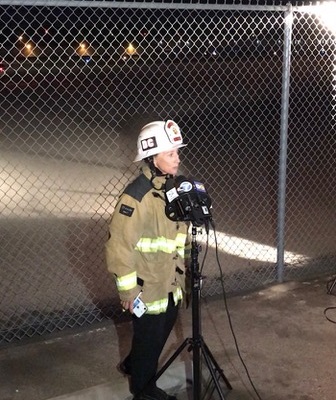 At 9:35 p.m. Kathy Schaefer, Division Chief of the Fullerton and Brea Fire Departments briefed reporters from more than half a dozen news networks covering the story live from the airport parking lot. Through the chain link fence behind her, the grey metal wreckage of the burned out plane could be seen on the runway, still surrounded by the flashing lights of emergency vehicles.

According to Chief Schaefer, the pilot was taking off in his Beechcraft BE-60, a twin engine, six seater piston aircraft. For unknown reasons, just seconds into the flight at an altitude of 50 feet, the plane veered left, crashing nose down into the ground. The plane, fully fueled for a planned flight to Utah, burned quickly, becoming, in the words of Chief Schaefer, “fully involved.” The pilot, whose name had not yet been released, was said to be in his early fifties. His wife has been notified of his death.

Airport authorities are awaiting the arrival of Federal Aviation Administration and National Transportation Safety Board officials to determine the cause of the crash.