Now that summer has arrived, it’s time to step outside and visit our local parks. Driving down Bastanchury and turning left on Kraemer Boulevard, I found Tri-City Regional Park, a 40-acre piece of land located in the City of Placentia, bordered on two sides by the City of Fullerton and just a quarter-mile from the City of Brea’s border. With an eight-acre lake and three reservable picnic areas, this park is completely free to the public unlike other regional parks in the area and offers a spectacular viewing spot for a sunset. 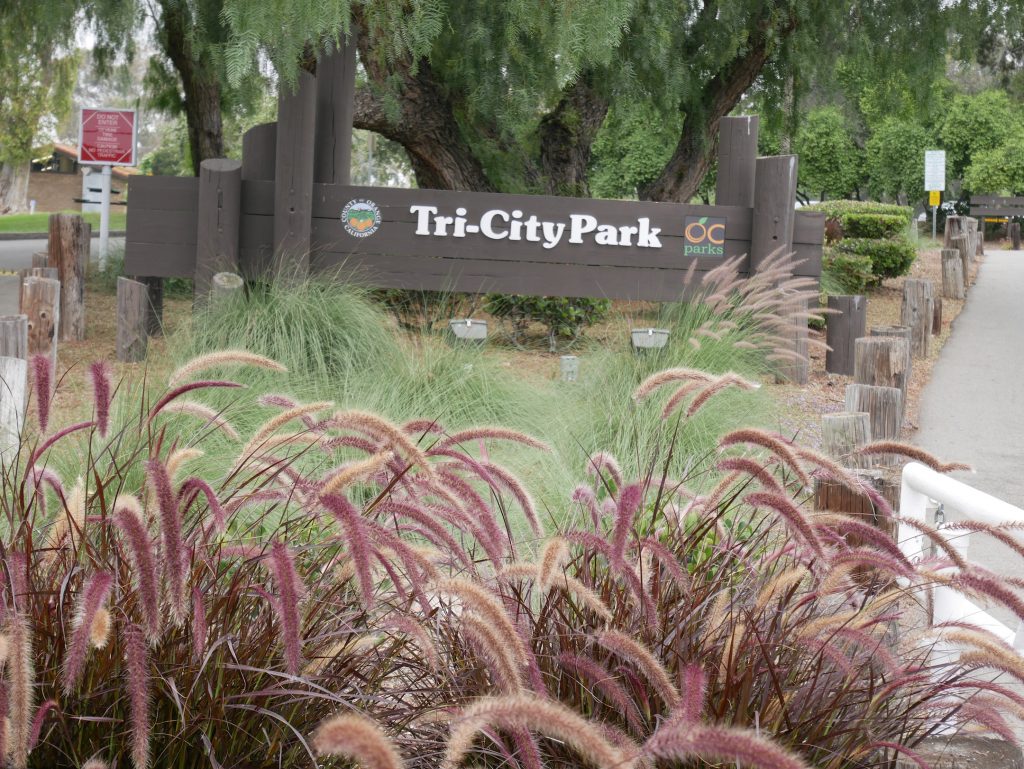 Originally, Tri-City Regional Park was ranchland owned by Colonel John Tuffree. According to the “History of the Park” section of the Tri City Park Master Plan, Colonel Tuffree came to Anaheim in 1872, where he is now regarded as one of Orange County’s pioneers. He settled with his wife in Placentia on their 662 acre ranch, located on parts of the old Rancho San Juan Cajon de Santa Ana. He named their ranch “De Buena Vista” and was very active in the farming community, eventually becoming one of the original directors of the Anaheim Union Water Company.

Colonel Tuffree was involved in bringing irrigation water to Orange County, recognizing farmers’ challenges in transporting water from the watershed locations in the mountains to their fields. Farmers would initially redirect surface water flow, dig wells, build small dams, and often compete for access to river water. Colonel Tuffree suggested a large reservoir, which would allow for water storage, to ensure irrigation water when needed. The Tuffree Reservoir was built on his ranch and helped support irrigation water supplies. In 1875, the first cooperative was formed to share water amongst the ranchers. The Cajon Irrigation Company was formed by ranchers from Placentia; they dug a 17-mile long canal bringing water from the Santa Ana River to Tuffree’s Reservoir. 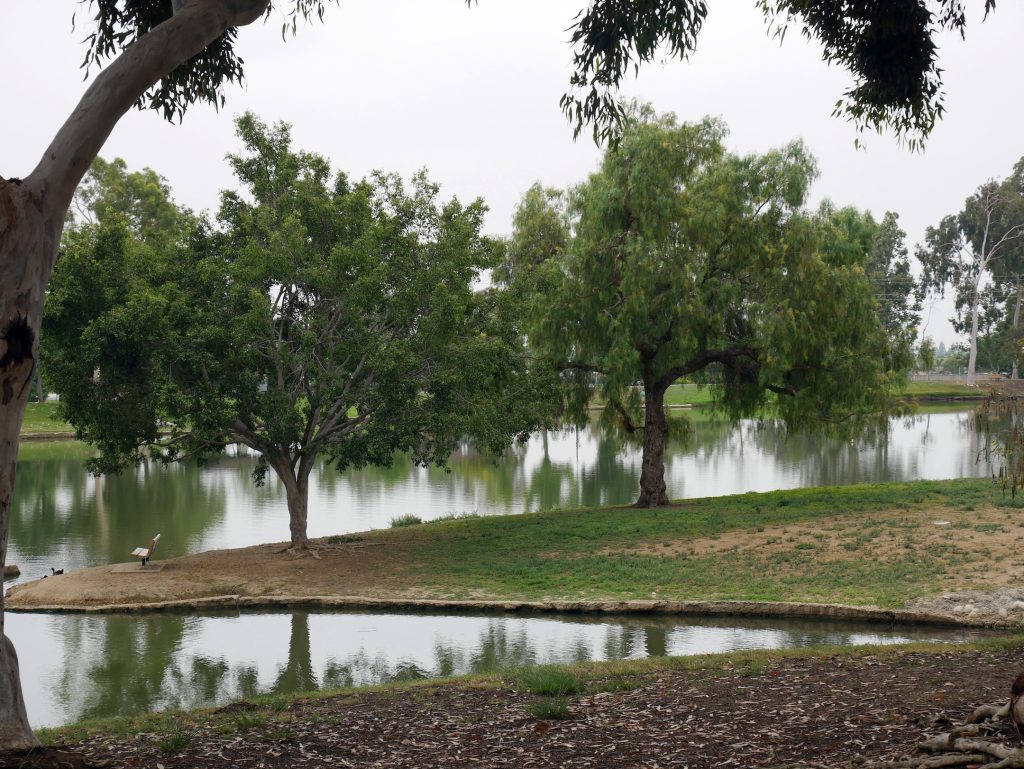 According to the OC Parks website, urban development in the 1950s and 1960s led to a cutback of agriculture in the area and greatly diminished the need for the reservoir. Starting in the 1970s, the cities of Placentia, Brea and Fullerton established an Authority, made up of community representatives, Parks & Recreation Commissioners and staff from all three cities, to develop the reservoir and its adjacent land into a public park. Working in tandem with Orange County’s Harbors, Beaches and Parks District, the Authority acquired the property and built Tri-City Park. In October 2011, the Tri-City Park Authority requested that the County of Orange include the park in the county’s regional park system. On October 2012, the Orange County Board of Supervisors approved the request and on January 5, 2013, the OC Parks Department began operating the park as “Tri-City Regional Park.” It is now maintained by the County of Orange.

When I visited on an overcast morning in June, the park seemed pretty crowded with dog-walkers, joggers and bicyclists. As I stepped out of my car, I spotted some people fishing for catfish and bluegill along the banks of the large lake, which is visited by many annual waterfowl. If anyone does plan on fishing, please keep in mind that you will need a California Fish and Game License. Launching of model radio-controlled sailboats also requires a permit.

With my camera mounted on my newly built shoulder rig, I began walking around the lake. As I made my way along the path, I encountered other photographers who also happened to be taking pictures. The park is a wildlife sanctuary, very popular as a bird watching destination and is the perfect place for birders, bikers, hikers, and photographers. The ducks lounging on the grass and shallow waters of the lake immediately caught my attention. Some were washing, while others were simply sitting, swimming and watching people walk or jog by. As I approached, one of the ducks began to slowly make its way toward me, probably thinking that I had food, which I didn’t. If they don’t think you have food, they will typically ignore you. It’s bad to feed the ducks and geese anyway, so there’s no need to run into any trouble with them. 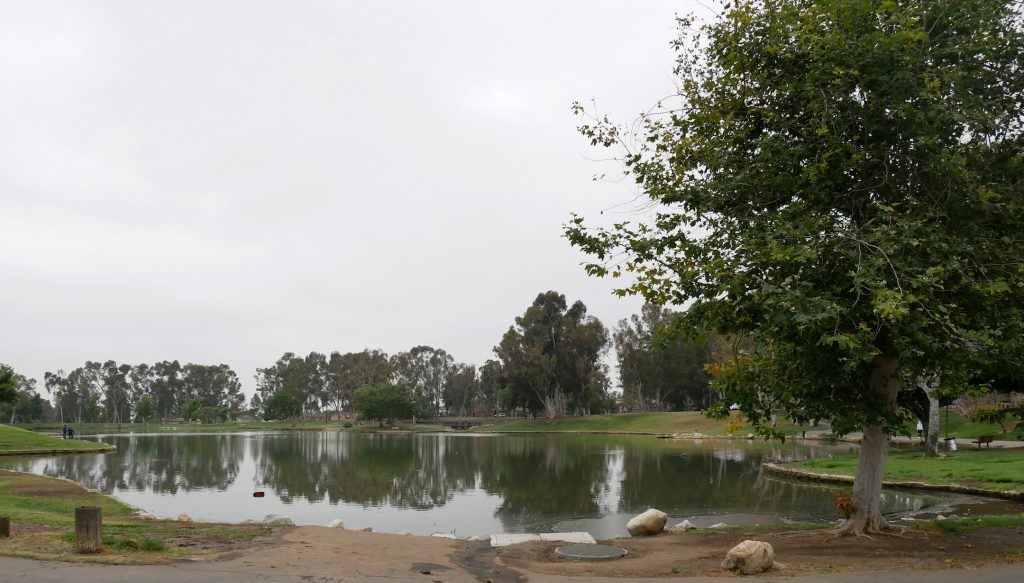 Sycamore and eucalyptus trees lined the meandering pathway as I made my way in a complete circle around the lake. Reflections of trees in the water made for some interesting photo opportunities. Benches were placed on the banks of the lake, where some people were relaxing. As I reached one end of the park, I saw two bridges, one on each side, connecting to a small protrusion of land that almost seemed like an island since it sat between the main section of the lake and its extended end. Crossing the first bridge, it wasn’t hard to miss a brightly colored sign with words of warning, “Don’t feed ducks or other water fowl.” On the connecting piece of land, there was another man fishing, casting his rod into the water.

On the other side of the park, there was a playground surrounded by three picnic shelters with large tables, which could provide shade on a hot summer day. In fact, there were numerous picnic tables and benches scattered throughout the park that would make for perfect rest stops and eating areas for families. The colorfully painted playground was popular with little children. There were slides, swings and equipment for kids to enjoy, along with a nearby restroom and drinking fountain. While there’s no shade over the playground, there are plenty of trees just outside of the play area to cool off under. Large, open fields of grass between well-established and newly planted trees also made this section perfect for dog-walking. 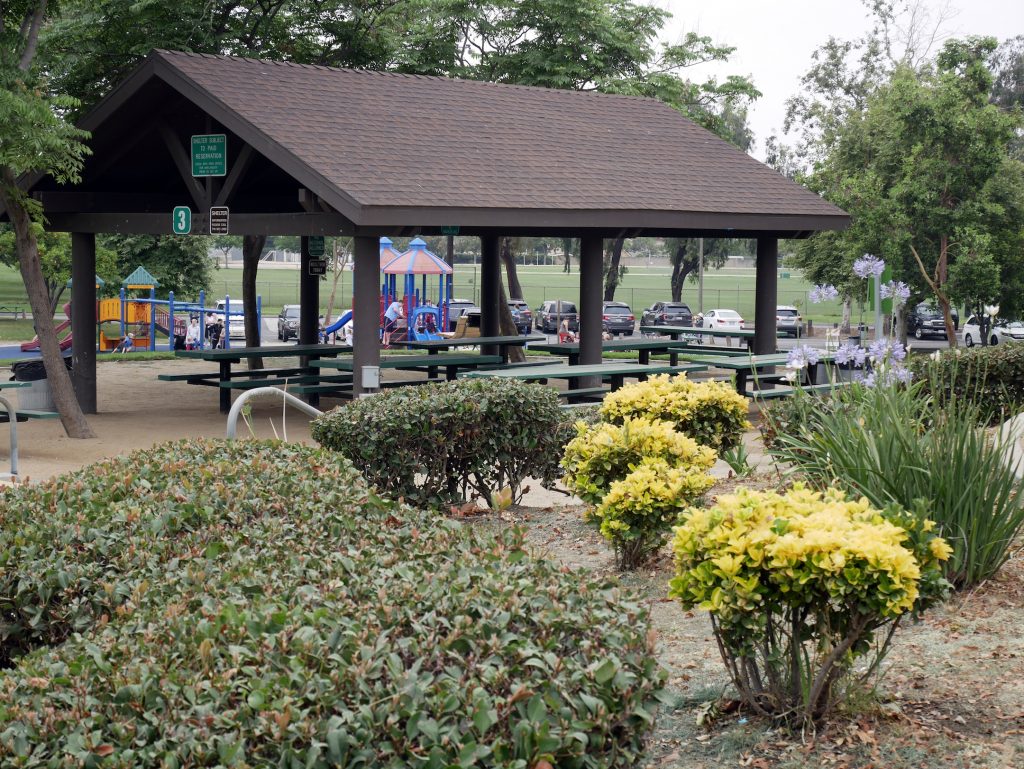 Walking back to my car, I came across a plaque positioned on a stone base and stopped to take a look. This was an Orange County Historic Civil Engineering Landmark for the Anaheim Union Water Company Irrigation System, designated in 2007 and dedicated in 2008. The Company’s Cajon Canal, which ran along the contour of foothills, diverted water from the river in Santa Ana Canyon to Yorba Dam and Tuffree Reservoir (now Tri-City Park). According to the plaque, “a system of more than 100 miles of lower ditches and underground pipes delivered irrigation water to area farmers long before incorporation of the cities of Anaheim, Fullerton, Placentia and Yorba Linda. The waters of the Santa Ana River are now used for groundwater recharge by the Orange County water District.”