Two recent scandals force the question: Is public safety the top priority of either the Nuclear Regulatory Commission (NRC) or SoCal Edison as they lurch forward in removing spent nuclear waste from cooling pools and loading into dry storage at the now shuttered San Onofre Nuclear Generating Station (SONGS)?

In August 2018, a conscience-driven whistle blower exposed how, because of a system design flaw and human error, a 54-ton canister loaded with radioactive spent fuel nearly crashed down 18 feet during a procedure to load it into an in-ground dry storage silo. He also detailed a general atmosphere of neglect for public safety by both the NRC and Edison.

A subsequent Special Inspection led the NRC to conclude that the incident was caused by “inadequate training, inadequate procedures, poor utilization of the corrective action program, and insufficient oversight.” Torgen Johnson, project director at the Samuel Lawrence Foundation who was instrumental in getting SONGS shut down, finds this deceptive because it places all the blame on personnel while ignoring the “defective engineering, design defects, and sloppy fabrication” of the storage system at SONGS.

NRC imposed an $116,000 civil penalty on Edison and cited the incident as a Severity Level II violation, the second most serious possible violation. NRC spokesperson David McIntyre confirmed that no spent fuel license has ever received a Level I violation and that Edison is the first to receive a Level II, making it the single most serious violation in the country.

In the latest scandal, it was revealed that the approved loading system can’t avoid scraping the thin (5/8-inch) steel-walled canisters as they are lowered into the concrete-reinforced steel silos. According to the advocacy group SanOnofreSafety.org, the NRC admits that scrapes are unavoidable and can trigger cracking which can grow through the canister wall, causing uncontrolled radiation leakage. CEO Kris Singh of Holtec, the company that manufactures the cans, acknowledged that even a microscopic through-wall crack would release millions of curies of radiation (one curie can kill you) and that attempting to repair a cracked canister is not feasible.

However, Edison spokesperson John Dobken wrote in an email that the NRC estimates a crack could fully penetrate a canister wall in 80 years (some canisters have been stored already for 16 years) and that Edison would then somehow figure a way to repair it or contain the canister in a storage cask licensed for transportation (that can’t crack). Bottom line: There is no approved emergency plan for dealing with a cracked or leaking canister.

According to Charles Langley, executive director of PublicWatchdogs.org, chloride from salt in ocean air can cause the thin-walled metal cans to fail quickly from corrosion. “Stainless steel does not really rust when it is exposed to salt, it cracks open.” All storage silos at SONGS are cooled by ambient sea air going in and out. Johnson adds that the canisters’ stainless steel wasn’t designed for a marine environment, and the issue of canister corrosion from salt was not understood until well after the canisters were licensed.

Langley is also concerned that a crack could release the inert helium gas inside the canisters which works as a fire-suppressant. If water or air gets inside, a chemical reaction with any damaged fuel assemblies could cause a hydrogen explosion.

Moreover, there has been no established method for even inspecting for cracked canisters. However, in response to the issue of canister damage during downloading, Edison applied robotic camera technology in early 2019 to just eight of the 29 already siloed canisters to visualize the extent of damage.

Edison and NRC both applied statistical methods to the camera findings toconclude “there is a 95 percent probability with 95 percent confidence” that the remaining uninspected siloed canisters and 43 ones slated to be downloaded in coming months would not incur a scratch/gouge deeper than that permitted by code: ASME (American Society of Mechanical Engineers) code permits scrapes up to one-tenth of the wall thickness.

However, Tom English, PhD, a recognized expert on high-level spent nuclear fuel who has worked with Carnegie Mellon, Caltech, NASA’s Jet Propulsion Lab and the Environmental Protection Agency, states this conclusion remains suspect because Edison and NRC haven’t made public the methodology or results which led to their conclusion. English openly shares details of his own mathematical modeling which led him to predict gouging during canister downloading significantly deeper than 1/10 of the wall thickness.

Moreover, Edison’s prediction is far from reassuring because Edison estimated that the deepest scrape from a canister undergoing insertion and withdrawal from a silo could be 0.0584 inches, which is a minuscule 0.0041 inches short of the 1/10 wall limit.

Given that nuclear disasters are not odds based – they either happen or not – and that the consequences of missing anything important could be devastating for centuries, one must ask the obvious: Why not just confine nuclear waste inside casks that can’t crack and utilize a storage system that can’t damage them?

While the risks at SONGS are very different from the 1986 nuclear disaster at Chernobyl, the lesson from Chernobyl is clear: When dealing with radioactive materials, there is no room for design flaws or human errors.

The founder of SanOnofreSafety.org, Donna Gilmore, points out that each of SONGS’ canisters holds roughly the same amount of deadly Cesium-137 as was released during the entire Chernobyl accident. And that’s just one isotope. There are thousands of pounds of plutonium in the 73 canisters undergoing beachfront storage at SONGS, and plutonium is deadly for 240,000 years.

Legal documents secured by Gilmore reveal that the canisters are only warranted for manufacturing defects for 25 years and the silos for 10, with no warranty for environmental conditions. She is advocating for storage casks with at least 10-inch thick metal walls that won’t crack, instead of thin-walled canisters (see comparison table).

Langley agrees, stating that “The American people deserve thick-walled casks like the ones used in well-regulated countries such as Germany.”

English, Gilmore, Johnson and Langley all agree that long-term storage at San Onofre is inherently unsafe because of risk of earthquakes/tsunamis and vulnerability to terrorist attacks. A post on Edison’s website downplays the earthquake risk. 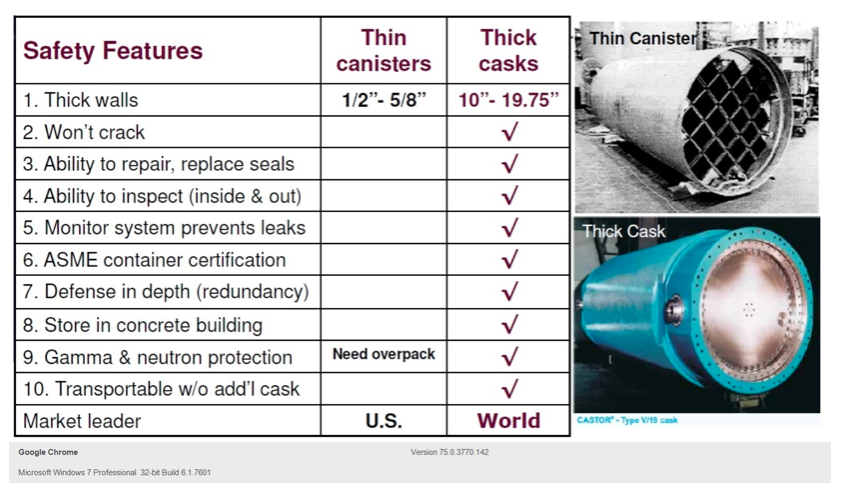 Contact SanOnofreSafety, PublicWatchdogs and Samuel Lawrence Foundation to learn more and get involved.