In the wake of three recent mass shootings (Gilroy, El Paso, and Dayton), I was intrigued to learn that the Crossroads of the West Gun Show was headed to the Orange County Fairgrounds.

Having never attended a gun show, I thought it might be an interesting experience, given the national conversation that is (or is not) happening around America’s epidemic of gun violence.

Just to put things in perspective, here are some stats:

-The United States is the #1 civilian gun-owning country, with 120.5 guns per 100 people, well ahead of numbers 2 and 3 (Yemen and Serbia, respectively), according to Small Arms Survey (www.smallarmssurvey.org). That means, of course, that there are more guns than people in the US. Put another way: Americans make up less than 5 percent of the world’s population, yet they own roughly 45 percent of all the world’s privately held firearms.

-America far surpasses other developed countries when it comes to gun-related homicides, with 29.7 homicides per 1 million people (in 2012), compared to, say, Australia with 1.4 per 1 million, according to United Nations data published in the Guardian.

-There were almost 11,000 deaths as a result of murder or manslaughter involving a firearm in the US in 2017, according to the FBI homicide index.

-Average gun deaths per year in the United States is 36,383 (including suicides).

-There have been more than 2,000 mass shootings (defined as shootings in which four or more people were shot) since the Sandy Hook massacre in 2012 (according to the Gun Violence Archive), which works out to about one a day.

Despite this grim situation, we seem to be at a standstill regarding what to do about it. Would attending the Crossroads of the West Gun Show provide me with any answers? I was doubtful. But, perhaps out of morbid curiosity, I took the bus to Costa Mesa on a Sunday morning to check it out.

At the entrance was a large NRA booth, manned by three men urging people to sign up, even offering to cover peoples’ entrance fee if they joined. I declined the offer.

After buying my ticket, I headed to a “weapons check” area where two smiling young women checked my bags for weapons. Except for a notepad, camera, and a book, I  was unarmed.

Having arrived somewhat early in the day, the gun show was not yet very well-attended. I walked past booths and tables selling all manner of ammunition, body armor, knives, swords, and of course guns. Lots and lots of guns.

Perhaps the most prevalent (and thus, I assume, the most popular) gun for sale was the AR 15 style semi-automatic rifle, the weapon of choice for the mass shooters in Las Vegas, Orlando, Newtown, Parkland, and other recent tragedies. 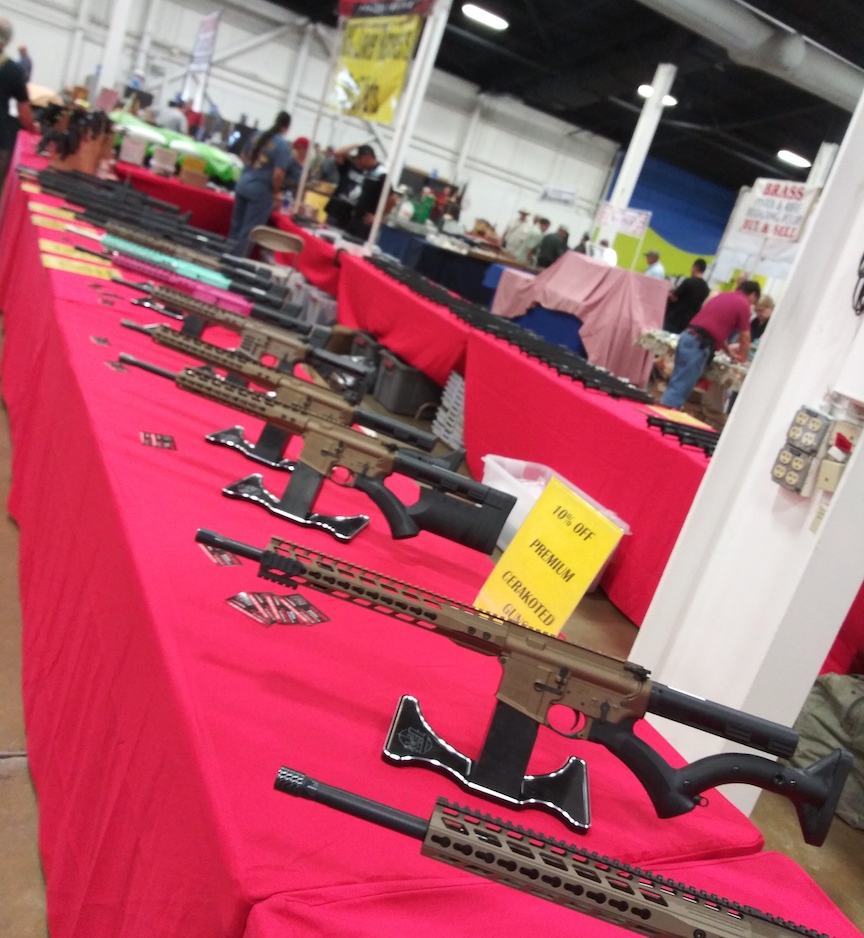 I didn’t do an exact count, but I would estimate that at least 20 of the booths and tables at the Gun Show sold AR 15-style guns or their components.

I spoke with a young man working one such booth, asking him what it would take for me to purchase an AR 15. He said I would need a valid ID, that I would need to pass a written “gun safety” test (available at the gun show for only $25) and that I would need to wait 10 days for a background check to be conducted before I could pick up my new AR 15 at their store in Riverside.

I spoke with an older man working the “gun safety test” booth, and he assured me that the test was easy and “mostly common sense.” I didn’t want to fork over the $25, but when I got home, I took the gun safety test online and easily passed on my first try. I have never owned a gun or taken any gun safety course before.

There was a centrally-located bar at the gun show, serving up “tall boys” of popular American beers, which attendees could carry around the show, as they browsed tables containing swords, knives, guns, and ammo. It occurred to me that, should a fight break out, it could get real Lord of the Flies in here.

As I expected, there was fairly strong political “vibe” at the Gun Show, as represented by the 4 separate booths selling Donald Trump memorabilia: MAGA hats, flags, stickers, t-shirts, etc.

One booth had t-shirts with Bible verses and guns on them, as well as various phrases and slogans praising the 2nd Amendment, guns, God, freedom, and the idiocy of liberals (in sizes for both adults and kids).

While browsing these t-shirts, the proprietor approached me, commenting on the mild California weather (it was cool and overcast that Sunday morning) as compared to the hot Arizona weather where he’s from. He was a nice guy, telling me about his special sale on t-shirts, adding that it’s fun to upset liberals.

I didn’t tell him that I was one such “liberal” who was indeed feeling, not quite upset, but more a sinking feeling of dread and despair. I smiled and nodded, adding, “Have a good day.”

As I wandered past the booths, I felt like an imposter, an outsider, a fish out of water. I had no desire to get into an argument with anyone, especially with all those weapons close at hand.

And so, when another man asked me if I would like to support a resolution to “protect our 2nd Amendment rights” in California, I said “Yeah” and took a pamphlet, which I read on the bus ride home, learning that this man was part of a group called “New California” that wanted to secede from the current “socialist” state of California.

The pamphlet he gave me was a “resolution” to be voted on by the State Senate and Assembly of this New California (as opposed to the actual, current California legislature), and included such gems as these:

“The people of California are suffering from a tyrannical state government which fails to provide a republican form of governance, enables and supports across its southern border the invasion of the United States of America by illegal foreign nationals, and protects vicious criminals who commit outrageous acts of violence upon the citizens of America.”

“The California state government, a mono-party system lead by a tyrannical dictator [Gavin Newsom?], continues to deny its citizens the protection and self-defense rights they are entitled to under the U.S. Constitution.”

“This rouge [sic] government of California has systematically removed all provisions in the California Constitution of its citizen rights to keep and bear arms, and believes these rights are granted only by the government, which is in conflict with the United States Constitution.”

This irony of this last statement was, I think, lost on the man who had handed me this pamphlet at a gun show in California that was selling guns.

There was a fairly large “book” booth, which I was immediately drawn to (being a bookish fellow). It was stacked with, you guessed it, books about guns—their history, uses, varieties—as well as other military-themed books. My eye caught a plain-looking booklet with the straightforward title How to Kill.

The longer I stayed at the gun show, the more heavy and depressed I felt. And so, eventually, I left, pondering the experience on the long bus ride home.

Regarding the question of the 2nd Amendment and the “right to bear arms” in our Constitution, I would recommend a book called The Second Amendment: a Biography by Michael Waldman, which gives a detailed analysis and history of the 2nd Amendment, and ultimately concludes: “The world of the Second Amendment is unrecognizable: a world where every white American man served in the military for his entire adult life, where those citizen soldiers bought their own military weapons and stored them at home, and where the idea of a United States Army would be enough to send patriots to grab their musket.  When the militias evaporated, so did the original meaning of the Second Amendment.”