Tenacious about keeping an all-Asian cast and using dialogue that is 70% Mandarin (with subtitles), writer/director Lulu Wang was rewarded when “The Farewell” emerged from the Sundance Film Festival as an audience favorite. Her film also received generous critical praise. Reflecting some of her own immigrant experience, Wang creates a protagonist brought to America at age six by her Chinese parents, eager for her to assimilate into American culture but also maintain her Chinese identity by speaking Mandarin within their home.

Wang had difficulty getting “The Farewell” financed, but the success of last year’s “Crazy Rich Asians” proved there was an audience for movies about Asians, and Wang’s ability to get cast member Awkwafina to play her protagonist, Billi, created appeal for investors. Although Awkwafina made her fame as a singer, she was eager to prove her acting chops, a talent immediately apparent to Wang when she observed the actress “carry scenes even without speaking because her emotions were in her face and eyes.”

Controlled and sustained emotions are important to “The Farewell.” We are told from the beginning that the movie is based on “a lie.” Billi, who lives in New York near her parents, maintains by cell phone a close and loving relationship with her grandmother back in China. Even in scene one, we witness Billi assuring her Nai Nai that she is wearing a hat (which she isn’t) because the older woman is certain that New York City must be cold. “White lies” abound but always with love and humor.

The Big Lie that inhabits most of the plot of the film is revealed when Billi gets to her parents’ apartment and is told that her Nai Nai has been diagnosed with lung cancer and is not expected to live more than three months. Billi’s aunt has just called with this sad news but with the assurance that Nai Nai does not know the severity of her diagnosis and the family want to make her final weeks as joyful as possible. The ruse that will bring family members together in China is a planned wedding for Billi’s cousin and his girlfriend. 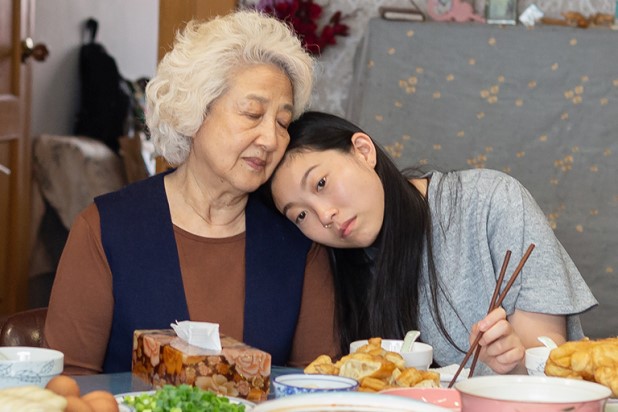 Reacting with an American sensibility, Billi is appalled that her entire family would handle this tragic development by not telling Nai Nai the truth about her condition even to the point of her aunt’s altering the x-rays so as to eliminate the cancerous nodes. Billi is not invited by her family still living in China for fear that she will insist on telling her grandmother the grim truth and spoil their festive wedding plans. Nevertheless, Billi buys her own ticket and flies to China.

Because Billi arrives with a somber face and feelings of guilt about the contrived cover-up, we in the audience watch events in China unfold with the same wonder and partial disbelief that Billi experiences. We are never certain if she will level with her grandmother or go along with the distraction of the marital festivities. However, stealing the show in all her scenes is the irrepressible Nai Nai (Zhao Shuzhen), a woman of energy, wit and sparkle, whom we never tire of watching even when she dresses down the kitchen staff for not ordering lobster for the wedding banquet.

Why does this movie resonate so well with Western audiences? Wang has succeeded in finding meaningful truths in the ways that different cultures seek to express their emotional responses to life’s most significant passages. Her unique access to Eastern and Western traditions has brought an authenticity and insight that make “The Farewell” both entertaining and profound.