With Hispanic Heritage Month taking place from September 15 through October 15, this is the perfect time to visit some of the many places around Southern California that preserve the contributions, achievements, and histories of the Latinx community. While fourth graders in Fullerton learn about California history through the missions, there’s another historic landmark equally close to home: Pio Pico State Historic Park. 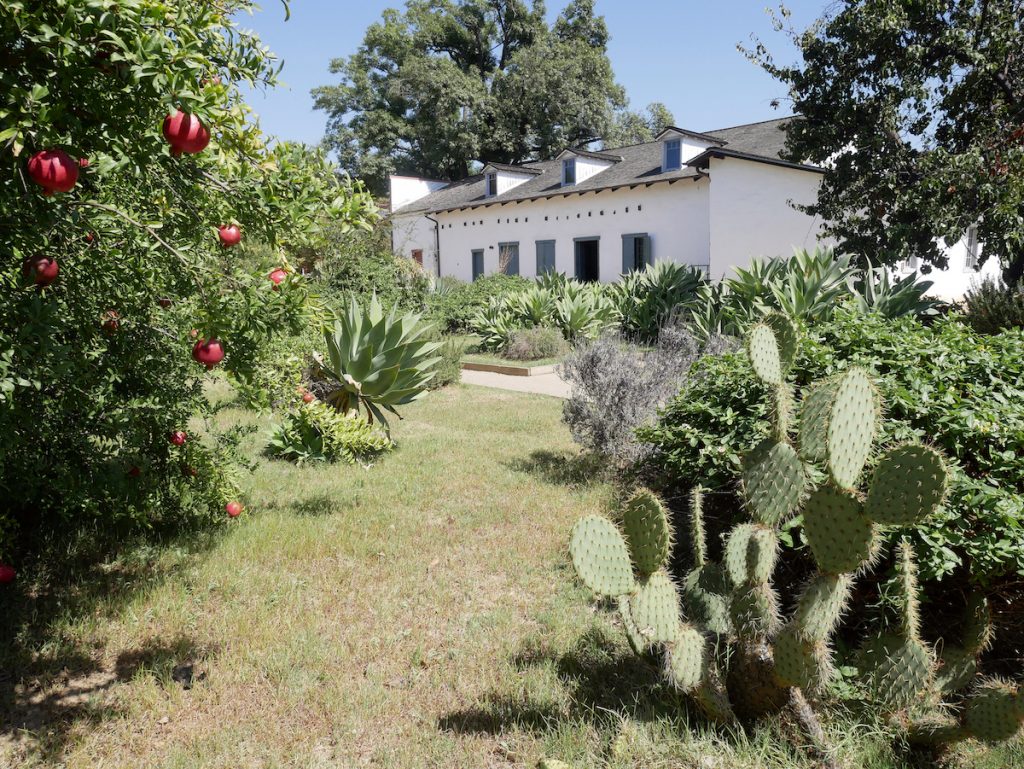 Just east of Fullerton in Whittier, Pio Pico State Historic Park commemorates the vibrant life and times of Pio de Jesus Pico IV. Don Pio Pico was a prominent figure in 19th-century California’s business, civic and political life, serving as the last territorial governor under Mexican rule. In fact, he was one of California’s most remarkable historical figures, witnessing, shaping and influencing nearly a century of California history in the 1800’s. Born a poor soldier’s son in a frontier Spanish mission (the San Gabriel mission) in 1801, Pio Pico’s ancestry included a mixture of Spanish, African, Indian and Italian. His life spanned a remarkable time that saw the Spanish, Mexican and American flags flying over Alta California.

According to a pamphlet from the state park, “after America invaded and took Alta California by force, Pio Pico returned to California, declared American citizenship, and became a California resident. In 1848, he began buying a 9,000 acre property. He named the land “El Ranchito,” the little ranch. Around 1853, Pico built an adobe ranch house near the San Gabriel River and it has seen several changes over the last 171 years. He sold cattle during California’s gold rush, becoming wealthy. Beginning in the 1860’s, crops of wheat, barley, oats, orange trees and grapes were grown at El Ranchito. In 1869, Pico sold some property and spent $85,000 of the proceeds to build the grand, three-story Pico House Hotel – the most modern in Los Angeles at the time. Pico House Hotel now stands on LA’s downtown central plaza as part of El Pueblo de Los Angeles Historical Monument.”

Pio Pico’s fortunes declined. The end of the gold rush, unpredictable weather, bad luck in business and unethical actions of other businessmen depleted his assets. Severe flooding in 1867 and 1884 damaged the Pico adobe and washed away much of Pico’s arable ranch land. It eroded much of his wealth. In his mid-80s, Don Pio was forced to mortgage El Ranchito, the last of his properties. Pico’s advancing age, costly legal cases and shady business partners triggered a series of financial setbacks. In 1891, he was evicted from El Ranchito. Once known as one of California’s wealthiest men, Pio Pico died penniless at age 93 in the Los Angeles home of his daughter, Joaquina Moreno, in 1894. 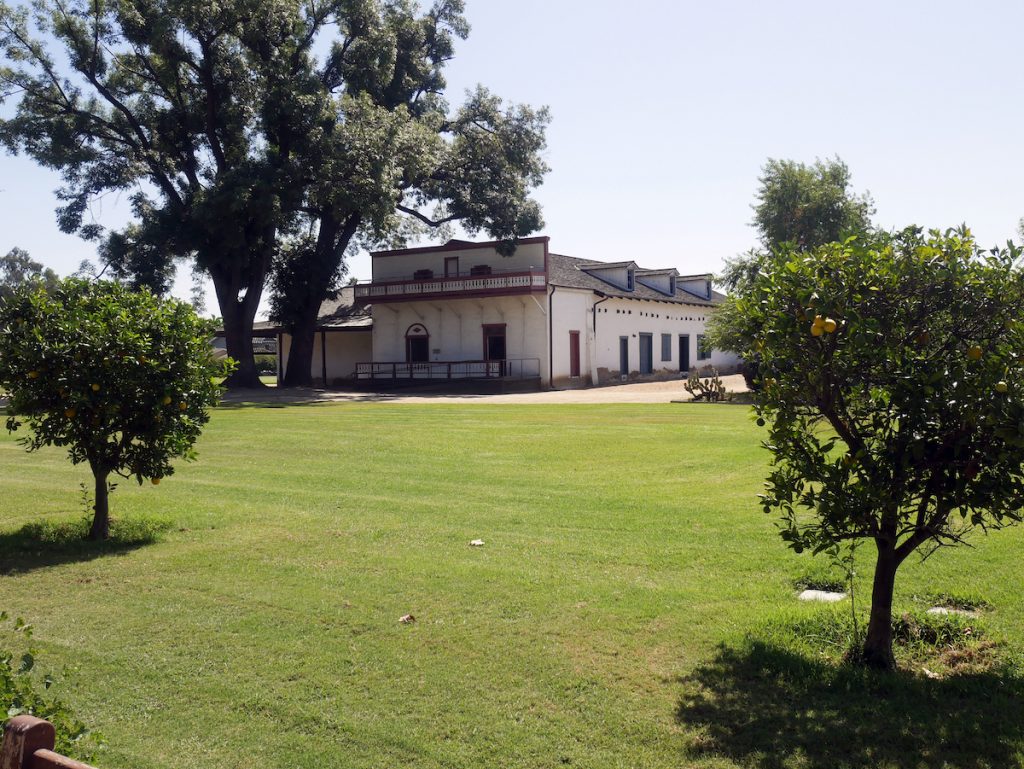 The Pio Pico Adobe fell into disrepair. In 1906, the abandoned and deteriorated Pio Pico adobe was in danger of being demolished for use as road fill. Pico’s former houseguest, water conservationist and inventor, Mrs. Harriet Russell Strong, spearheaded an effort by the Whittier Women’s Club and other civic groups to save it from that fate, raising the money needed to fund its 1909 restoration.

In 1917, the City of Whittier deeded the adobe to the State of California. Ten years later, the property became part of the new California State Park State system. The adobe has been restored three times since then: the building reopened as a museum after its 1946 restoration; its old floors were replaced in 1968; and the 2000 restoration reconstructed its historic landscape.  Earthquakes damaged the house in 1987 and 1994. Pio Pico State Historic Park reopened in September 2003 after a three-year major renovation.

This state park has an interesting history and features one of Southern California’s few remaining 19th century structures made out of the massive sun-dried mud blocks called adobe. The Pico Adobe is built of thousands of earthen blocks. The fact that most of the walls still standing are original shows the skill of the workforce who laid these massive bricks. 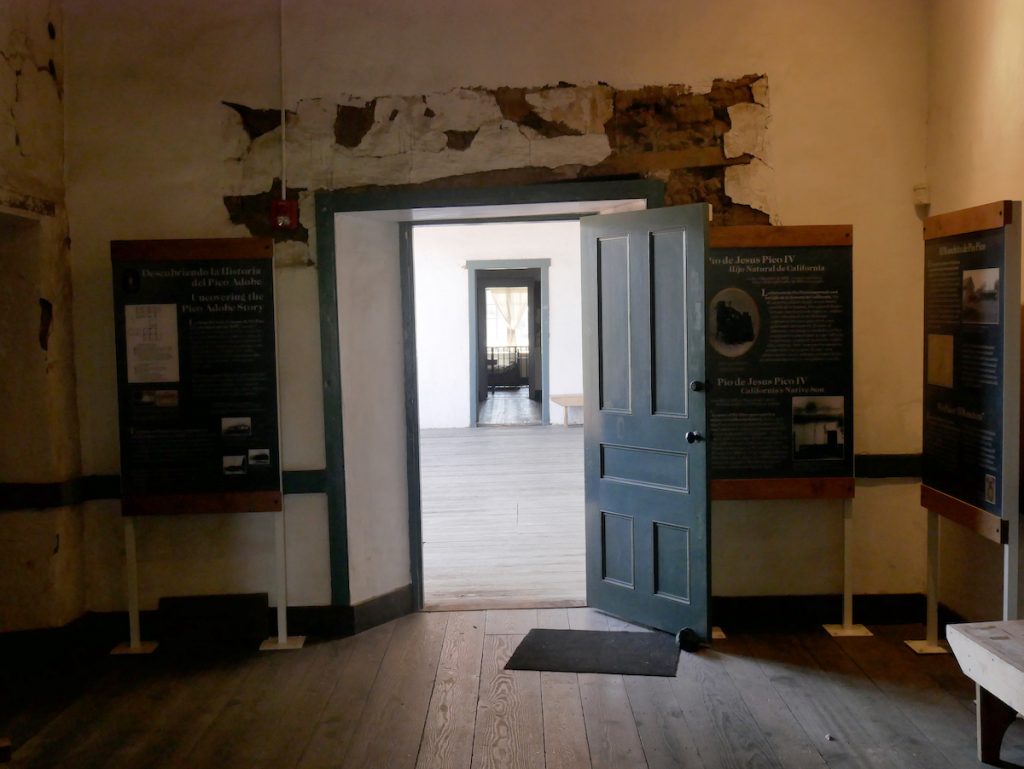 On a sunny Saturday in September, I decided to visit the five-acre site. Driving from Whittier College where I was working on an animation project, I took Whittier Blvd. and turned left on Pioneer Blvd. just past the 605 freeway. Parking along the side of the property, I walked up a wide dirt driveway and saw the Pico Adobe in the distance. Right in front of the adobe was a white pyramid shaped birdhouse, which the pamphlet referred to as a dovecote, a home for domestic pigeons. Right past the dovecote, I spotted an outdoor, wood-burning oven, which the map referred to as “horno” or bread oven.

Pio Pico’s home was unique in that it had an American-style façade or false front with a balcony. Walking around to the side, I stepped inside what was once a storage room. On the far back wall, there was what archaeologists called “historic graffiti,” probably left over from the adobe’s period of disrepair.

Walking up some stairs to a small courtyard, I stepped through a doorway into a room with an old fireplace. Parts of the paint on the wall had been peeled to reveal the adobe bricks underneath. In the next room over, I read on a plaque this former home of Pio Pico was open to the public for the first time on March 19, 1909. A crowd of about 1,000 people attended and enjoyed a meal of barbecued ox, enchiladas, tamales, and pumpkin turnovers. Hanging on the wall was a copy of an original oil painting of Pio Pico from the Bowers Museum. It was possibly painted by Paul Petrovits, who filed suit against Pico in 1876 for a portrait he claimed to have painted of Pico. In response, Pico claimed the artist had produced the portrait for his own use to promote himself. Pico eventually settled the claim.

What I found particularly fascinating was that there were no interior photographs from the time Pio Pico lived in the house. Everything that is currently known about room use and furnishings are brief written descriptions and a few household objects of the period. I learned from looking at the pictures that were on display that El Ranchito was an ethnically diverse community of ranch workers, tenant farmers, new settlers and their families. Its early population was mainly from Mexico, many of whom were second- and third-generation Californians.

The walls of one of the rooms in the historic adobe home were unrestored, so that visitors could see their historic composition. Handmade adobe bricks whitewashed with limestone plaster show the craft of adobe architecture in Alta California. I also learned that adobe building windows are often built into the several-feet-thick earthen block walls with an angled framework that allows more sunlight into the rooms.

I found the sala (living room) particularly well-lit. This was a room where the family would have entertained a distinguished list of guests, which explains why the room was decorated in silk- and lace-covered furnishings. Personal items belonging to Don Pio and his family were on display throughout the adobe. 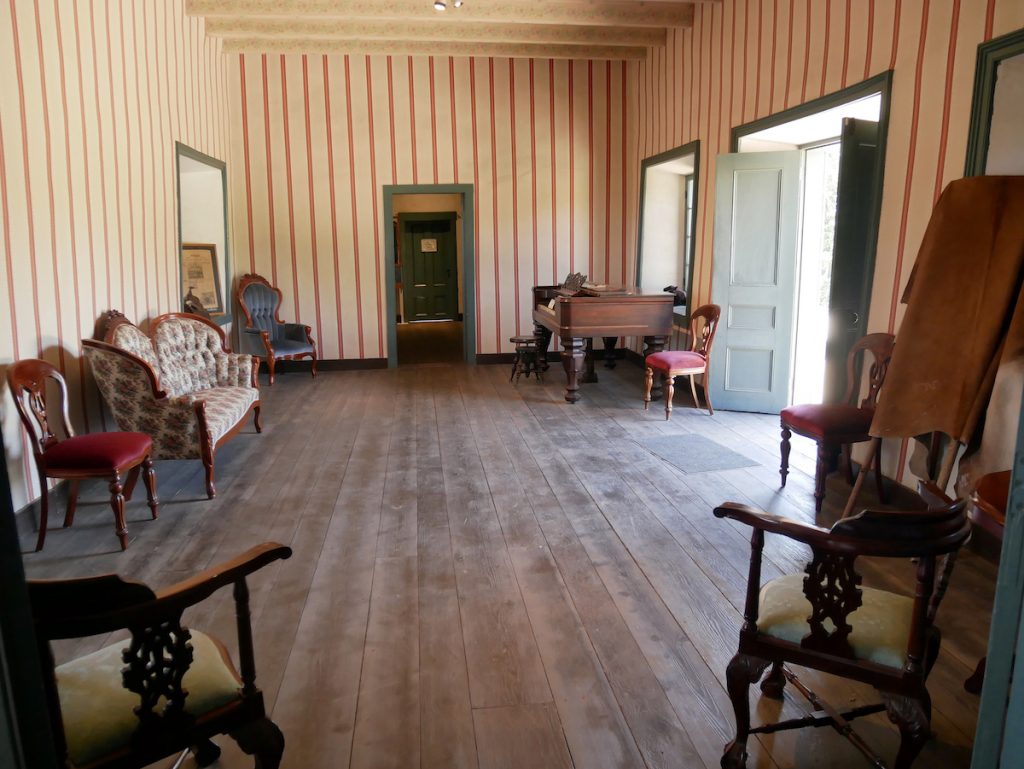 The Pico Adobe’s evolution was a bit complicated. Pico’s own changes and later restorations altered the building. Archaeological and historical data have helped state park rangers piece together the puzzling Pico Adobe evolution, which explains why there was an archaeological dig inside one room of the house.

Outside, I couldn’t help but admire El Ranchito’s gardens. One pathway led underneath supports overgrown with grapevines, where actual grapes were growing. There were prickly pear cacti, which provided the popular nopales, used in a variety of Mexican recipes, and the sweet quince was the base for a delicious jam. Willow trees once lined the river’s banks. The trees served many purposes, but Pio Pico’s main reason for planting willows was to stabilize the riverbanks and stave off the flooding brought about by erosion. There were also quite a few pomegranates growing on a tree close to the house. I found out from reading one of the informative plaques that Pio Pico’s favorite flower by far was the ethereal, delicate-looking Rose of Castile, which came from Spain. He liked it so much that the shape of the flower decorates the wallpaper of the sala.

Visitors can enjoy the park by picnicking, bird watching and exploring the fifteen room adobe with interpretive displays. This “little ranch” and adobe home at Pio Pico State Historic Park is now surrounded by the communities of Whittier and Pico Rivera east of Los Angeles. Much has changed since Pico’s time, but for local and state-wide history, Pio Pico State Historic Park is a spectacular example of life in early California.

Pio Pico State Historic Park is completely free, although donations are encouraged. The Historic Adobe is open from 10am to 3pm on Thursdays and Fridays and stays open until 3:30pm on Saturdays and Sundays. To watch my video of the historic adobe and surrounding ranch land, check out my video by visiting the Observer website and clicking the tab labeled “Local.” Underneath that tab, click on “Emerson Little YouTube Channel,” which should take you directly to my page.