Film Review: “Judy” Gets a Hit and a Miss

Directed by Rupert Goold and written by Tom Edge, “Judy” serves up to audiences the last tortuous months of Judy Garland’s personal and professional life. The legendary performer still has the voice and charisma to command audiences while on stage but the anxiety and loneliness of a star clinging to fame while destroying herself with barbiturates, booze and bad choices.

Making a comeback of her own is Renee Zellweger, who has had several Oscar nominations and won an Oscar in 2004 for “Cold Mountain.” Zellwegger will undoubtedly be recognized again by Hollywood for her impersonation of the iconic Judy Garland. She takes on  Garland’s frailty at the nadir of her life as well as her voice, which remains remarkably intact whenever she appears on stage. Without rehearsals or vocal exercises, Garland comes alive on stage, and Zellwegger makes this not only believable but memorable. 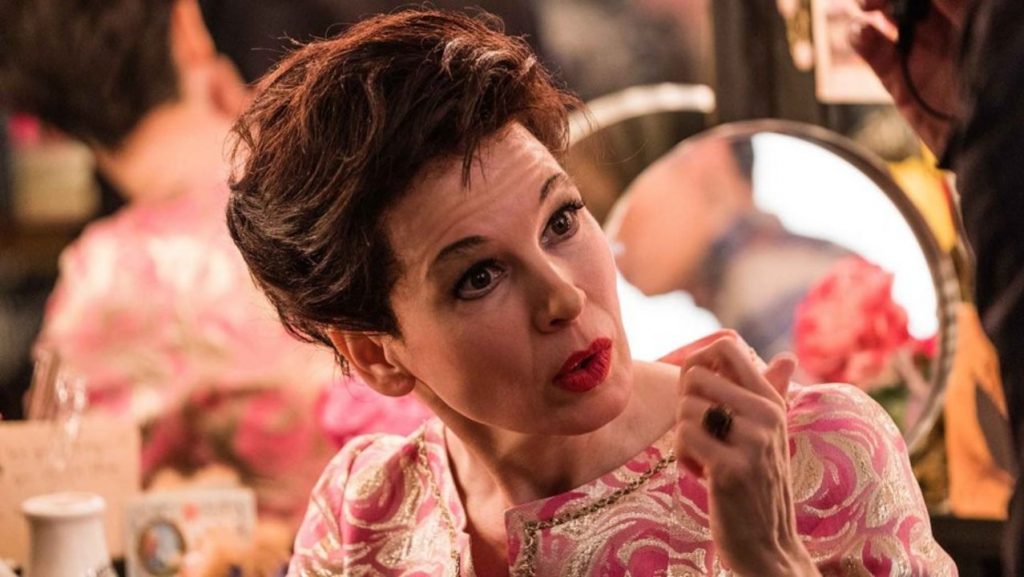 We first see Garland in Los Angeles with her two young children trying to check into a  hotel. She is turned away because her bill is past due. Garland has made four husbands rich but now she is without a home or a job, so she reluctantly takes Lorna and Joey to stay with their father, Sid Luft (Rufus Sewell), in Brentwood.  He convinces her to accept a job offer to perform for five weeks in the Talk of the Town night club in London, where her popularity still draws crowds.

Although reluctant to leave her children behind, Garland needs the money and plans to return from London with the resources to rent a home and reunite with Lorna and Joey. Attending a party at daughter Liza Minelli’s home, Garland meets a young agent, Mickey Deans (Finn Wittrock), who senses her neediness and provides a distraction for Garland’s loneliness.

It is December in 1968 when Garland arrives in London to perform in Bernard Delfont’s (Michael Gambon) supper club. Knowing that Garland is undependable, he assigns the young and capable Rosalind Wilder (Jessie Buckley) to shepherd her through London and get her to performances on time. This is not an easy assignment because Garland seldom eats, barely sleeps and swallows quantities of pills.  Adding another distraction is the appearance of Mickey Deans with promise of a whirlwind romance. At forty-seven, Garland has had four failed marriages, but she is still optimistic that the right man will someday enter her life and bring her happiness. So she enters a fifth marriage.

In many ways, “Judy” is a standard biopic and writer Edge uses a familiar trope for explaining her troubled adult behavior through flashbacks to an unusual and deprived childhood. We see young teenager Garland (Darci Shaw) denied food for fear of her gaining weight while playing Dorothy in “The Wizard of Oz” and denied needed sleep so that she can be ready to perform on the set before dawn. There is also emotional and psychological manipulation as a fearsome Louis B. Mayer (Richard Cordery) tells her that she will never have a normal life with a husband and children because she is put here to entertain the world.

Although needed for insights into Garland’s earlier life, the flashbacks often appear awkward.  Shaw was not a good choice for playing young Judy during the years she was filming “The Wizard of Oz.” She reflects none of the energy, talent and buoyancy that rocketed Garland to instant fame and won the hearts of America with her expressive eyes and stunning voice.  A particularly awkward flashback shows teenaged Judy trying to flirt with Mickey Rooney but without success.

On the other hand, audiences may forgive these flaws and enjoy the music Garland brought us. Zellwegger does a nice job singing in her own voice “The Trolley Song,” “By Myself,” “Come Rain or Come Shine.” The iconic “Over the Rainbow” is saved for the last and is handled very effectively.

Audiences will also find some reassurance knowing that the fragile and failing Garland that disappointed several London audiences in 1968 was based on well-researched material.  Producer David Livingston sought out script advice from the real-life Rosalyn Wilder, still working and living in London, who recalls clearly the five weeks she worked with Garland in that cold December. Making a few script adjustments, Wilder made certain that the Judy we see on screen represents accurately the performer she knew.