On October 30, the Fullerton Fire Department responded to a brush fire in the Brea Dam area of Fullerton. Fullerton Fire, Orange County Fire Authority Air Ops, and Fullerton Police responded. Harbor Blvd was temporarily closed in both directions from Brea Blvd to Bastanchury. 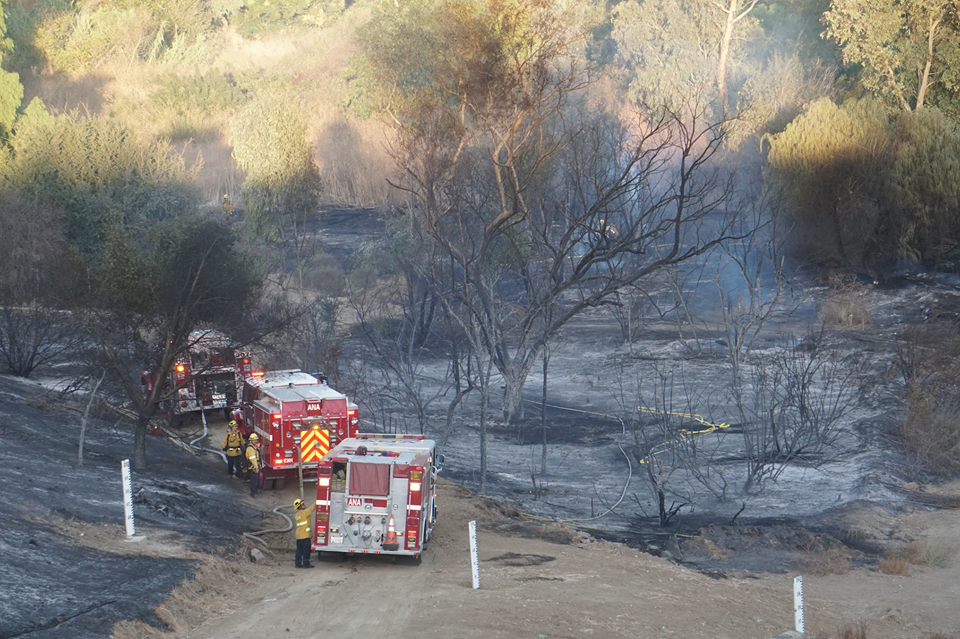 Firefighters work to contain a fire at Brea Dam. Photo by Jensen Hallstrom.

Within a few hours, the fire was under control and the forward rate of spread had been stopped.

Another fire broke out in Fullerton around 7:40, Wed, Oct 30 at the northeast corner of Castlewood Drive and Gilbert burning 11 acres and causing road closures and evacuations before fully contained Thursday morning, according to the Fullerton Police Department.

An Evacuation Center was opened at the Fullerton Community Center on W. Commonwealth and the evacuation order was lifted at 10:30pm Wed.

Crews from LA and OC fire agencies joined Fullerton Fire working through the night to ensure no homes were lost. There were no injuries reported and no homes were burned. Arson investigators are working to determine the cause. A flare gun was found near the scene.

Fullerton Firefighters will be on scene throughout the day to ensure the fire is completely out, performing “mop up” and patrolling the burn areas.

Last winter’s rains resulted in an overgrowth of invasive weeds like mustard and thistle that created dry, thick, brush that acted as fuel for these local fires, which were also exacerbated by the recent Santa Ana winds.

These local fires came just three days after Governor Newsom declared a “State of Emergency” due to the fires raging across the state in recent days.

Here are some details of other California wildfires still being fought, as of October 31st, according to CBS news:

-About 53,000 homes and businesses are still affected by Pacific Gas & Electric’s power shutoff after it cut electricity to millions of people in an effort to prevent new fires.

Causes of these fires are varied, from outdated infrastructure to humans accidentally starting them, but the situation is made worse by conditions created by climate change—hotter temperatures make the land drier and more prone to fires.

According to a recent study published in the journal Earth’s Future, in California, warm-season days have increased by 2.5 degrees since the early 1970s, .

“The clearest link between California wildfire and anthropogenic climate change thus far has been via warming-driven increases in atmospheric aridity, which works to dry fuels and promote summer forest fire,” the report states. “It is well established that warming promotes wildfire throughout the western US, particularly in forested regions, by enhancing atmospheric moisture demand and reducing summer soil moisture as snowpack declines.”

The lead author of the study was Park Williams, a professor at the Lamont-Doherty Earth Observatory at Columbia University, who says that the moisture deficit caused by climate change will likely double by 2060.