I remember participating in the All the Arts for All the Kids programs when I was little. Back at Golden Hill Elementary, I always looked forward to the Arts Labs, which travelled from school to school, exposing students to new technologies. Starting in second grade, they had me and my class making short films using programs like I-Movie. By the time sixth grade came around, I was participating in events like the Renaissance Fair, where I played one of the many human chess pieces. I specifically remember taking a field trip to the Children’s Art Museum and Creativity Center at Fern Drive, where I learned more about Greek and Roman mythology. Now, that I’m older, I wanted to revisit the Museum and Creativity Center, so I arranged an interview with Lauralyn Eschner, who serves as President of All the Arts for All the Kids.

The All the Arts for All the Kids Foundation is responsible for putting up the mosaic hearts around downtown. It is a nonprofit organization dedicated to developing, sustaining and supporting the arts as an intrinsic part of every child’s education. The All the Arts for All the Kids program, where every single child in the school district gets art, music, dance and theatre classes, started in the 1990-91 school year, according to Lauralyn, who came up with the idea for the program as she was driving home on the freeway one day. “I knew that every child needed art, music, dance and theatre and I knew that artists were a way of living their art form, so I thought if I could find those artists with the teaching gene, it’s magic,” she said. “We have artists who live and breath their art form and they’re able to communicate that and translate that art form to kids. Then, once the idea formed in my head, I couldn’t quite get rid of it, so then I took it to the superintendents and the school board. Fortunately, everybody said yes. Then, pretty soon, we started interviewing and hiring artists and it grew from there.”

The Foundation began in 1992. According to the All the Arts website, “each year, the Foundation, in partnership with the Fullerton School District, provides funding for lessons in art, music, dance and theatre.” These lessons reach each of their kindergarten through sixth grade children at the seventeen elementary schools, with innovative, curriculum-related arts lessons conducted by professional artists and educators. “Students, classroom teachers, principals, parents and district administrators all have thrown their support behind the program over the years,” said Lauralyn. “They’ve seen what a difference it makes in the lives of the kids and everyone has become a strong arts advocate.”

Featuring interactive displays and hands-on exhibits, the All the Arts Creativity Center invites children into the world of learning through the arts. Their hands-on exhibits are designed to feed children’s imaginations while they experience many of the world’s great creations. At the end of October, the Children’s Art Museum had a Native American exhibit. “It’s really intended to be through the eyes of the arts, to get kids so that they’re totally excited and living the cultures,” said Lauralyn. “We’re primarily dealing with Plains cultures and Southwest cultures. One of the things we want to do is get the kids so that they’re loving cultures.” 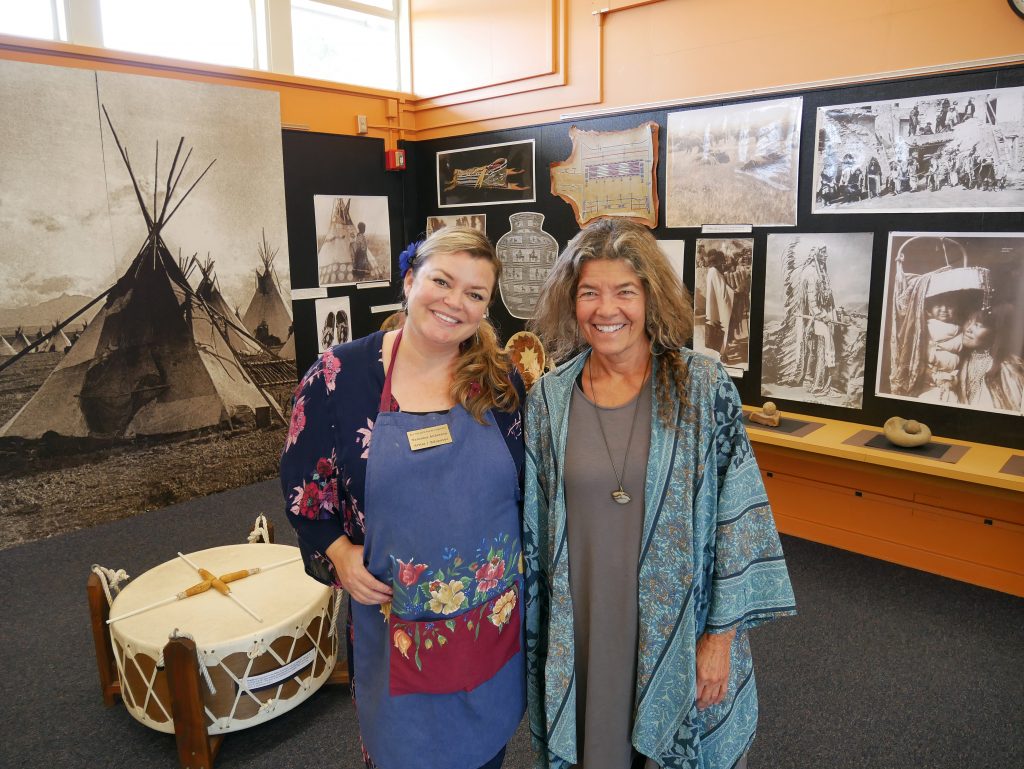 Parking and walking to room 3 of Fern Drive School, I found myself in a room divided into two different spaces. Lauralyn Eshner and Veronica Anderson, an All the Arts artist and educator who has worked with the organization for seven years, greeted me warmly as I entered the Museum and Creativity Center. On the right side of the room was the main display area with a real Buffalo skin drum in the center of the floor. Lauralyn explained, “We teach the kids a very, very basic dance. When you’re dancing the dance of a people, you can’t help but love them and feel them and be a part of that world.” All the Arts instructors also give the kids treasure hunts, where they have specific things to look for within each part of the exhibit. She continued, “There’s just something so fun to see the kids when they discover things and really look at each piece and each object. They get jazzed over it. They end up loving learning.”

The Children’s Art Museum incorporated real museum artifacts into their Native American exhibit that kids could actually touch. Veronica explained that she normally breaks kids up into four different groups when they visit. “They have a treasure hunt, so they’re really interacting with the entire space. This entire room is working all at one time,” she said. “They also do a weaving, so we have some beautiful Navajo webs and a Navajo dye chart for them to learn how the actual yarn is created and how the colors were created.” Instructors normally give children a loom that they can take home with them and finish up their weaving.

Moving our way around the room, Lauralyn and Veronica took me to the corn grinding station, which was a chore for the ten-year-old Hopi. “One of the things that’s actually really cool about these is that they’re really authentic grinding stones,” said Lauralyn excitedly. Veronica added, “The kids really enjoy grinding the corn. While the kids are in this space, it is hands-on, but they also treat this area like a museum.” 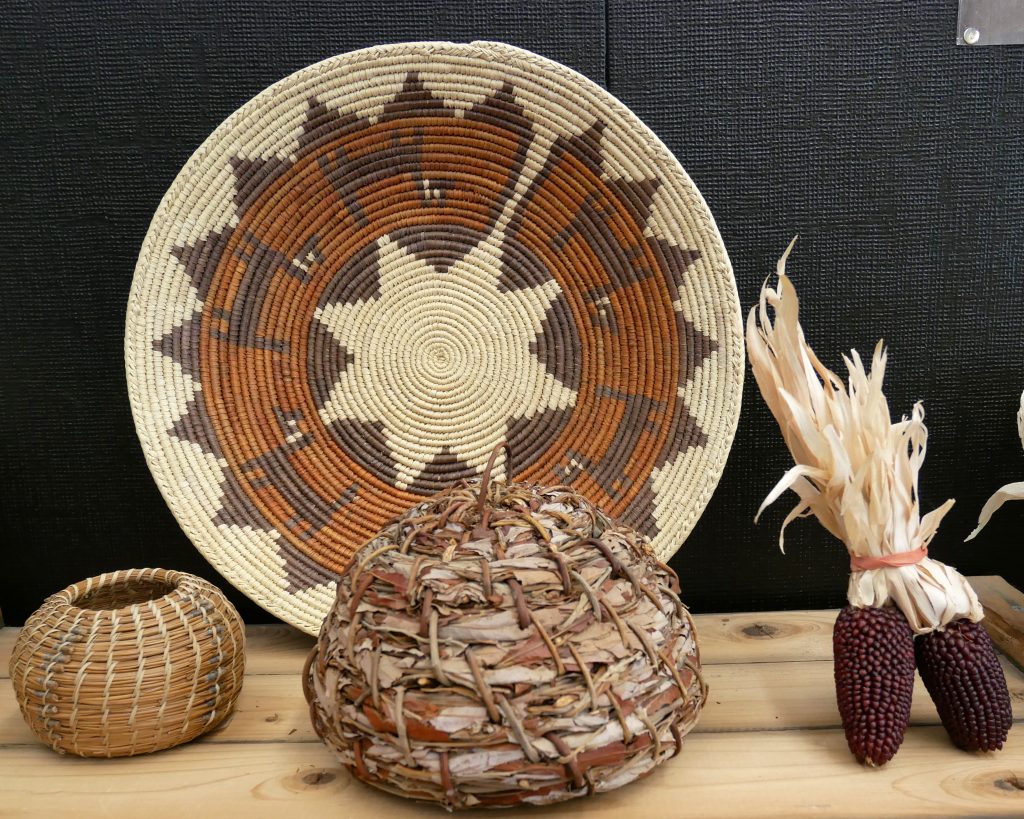 I happened to find a display on the opposite side of the room particularly fascinating. Placed on a low white pedestal, scrapers, arrows, along with other Native American tools were laid out for visitors to look at. I learned that scrapers were used chiefly for the preparation of hides and skins for clothing and bedding. These tools were typically made from flakes without modification except to produce a scraping edge. There were also arrows, which are still very symbolic to Native Americans. They weren’t just used in battles and hunting. For example, when drawn or used as symbols in beading, weaving, or hide/cave painting, arrows had different meanings. Crossed arrows symbolized friendship, while a single arrow represented protection and a lightning arrow signified swiftness. There were also tools with grooves in them, which were used by arrow makers to straighten the wooden shaft of the arrow. “I do welcome any of the kids to investigate and pick up any of the items on the lower shelf, as well as the black volcanic glass, which they are happy to tell me is obsidian,” said Veronica. “As part of the treasure hunt, they’re not just finding these objects, but they’re also drawing some of the objects.”

The children can really appreciate the arts through the Native Americans. Veronica showed me a unique rattle and bear claw that really resonated with the kids. The bear claw is actually a symbol for a good omen. Pointing to some photographs, Lauralyn explained that they also talk about the dress and how in the Plains tradition, absolutely every piece of the animal they killed was used. “It was either eaten or clothing was made out of it,” she elaborated. “They did it with artistry. They beaded it so that they were all beautiful. Look at the patterns. There’s a whole thing about symbology in the patterns. So we talk about symbology with the kids. Then after they’ve done the discovery part of it all, they go ahead and make their own art projects based on some of the imagery. They make it their own creative interpretation.”

In the other half of the classroom exhibit space, there were long tables which served as craft stations for the children. Veronica said, “Once they are done with the treasure hunt, we all come over to this side of the classroom. They sit down and we create a Native American shield. That’s where they’re choosing their symbols to represent themselves and it’s really neat what they come up with.”

Lauralyn explained that part of the thought process behind the entire exhibit experience is to fill their visual image bank with the imagery of a culture and of a people, to have it become something other than popular culture. She said, “This way, the children can get some ideas of how different forms of beauty have evolved and how they’re all a part of us. They can then incorporate that into their own psyche and their own visual creativity. It’s a fun process, where they really do it by exploring and discovery, yet they also do it by creating.” 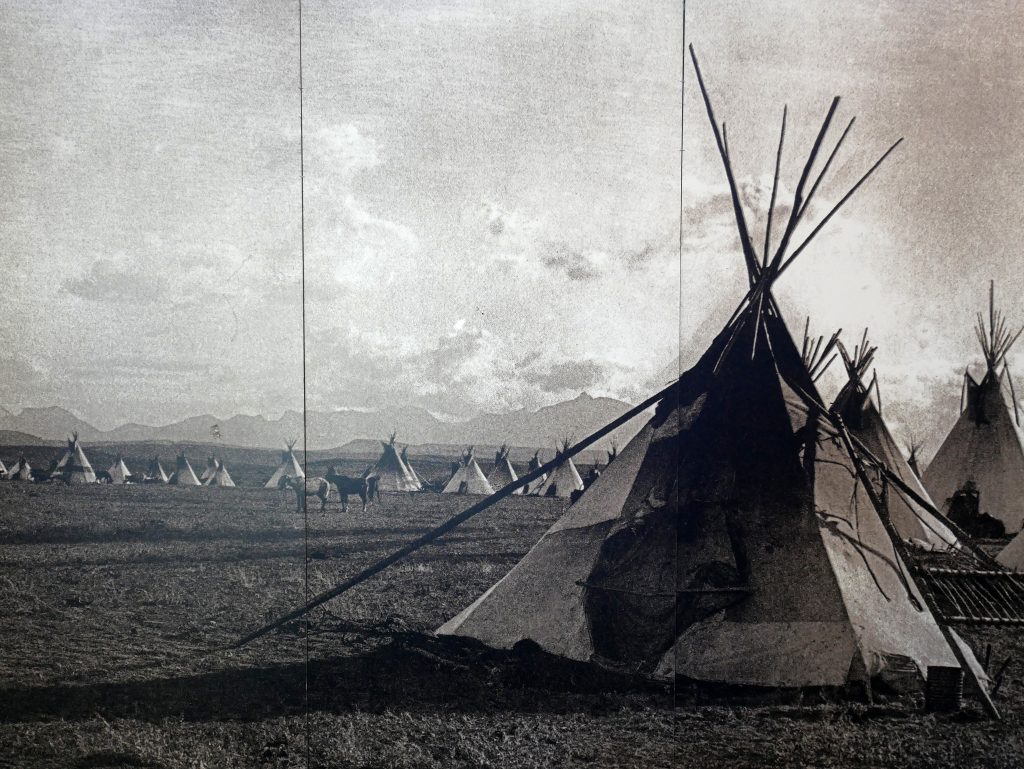 When the children come to the Children’s Museum and Creativity Center, they are in this space where they’re hearing, creating, dancing, drumming and treasure hunting. They’re very active as they move throughout the room. “Creativity is taught through the arts,” Lauralyn said. “It’s the through line across subject areas and creativity is like a muscle. Once you figure out how to make it work, you can really use it and apply it to other subject areas. So, not only do we teach arts skills, but we also really emphasize creativity and have the kids nurture that and develop that creativity. They learn by doing. It’s a hands-on active way of engaging children.”

To see my full interview with Lauralyn Eshner and Veronica Anderson, along with my complete walk through of the Native American exhibit at the Children’s Art Museum and Creativity Center, visit the Observer website and click the tab labeled “Local.” Underneath that tab, click on “Emerson Little YouTube Channel,” which will take you directly to my page.