Ever since their 1973 film, “Mean Streets,” director Martin Scorsese and actor Robert De Niro have worked together on several memorable films. In 1980, their movie “Raging Bull” won Robert de Niro a Best Actor Award and between them these two men have garnered several Oscars. So expectations were high for the three and one-half hour film, “The Irishman.” However, audiences won’t be disappointed, for this may be their best movie yet.

Like many Scorsese films, “The Irishman” is set in the compromised world of the Mafia and covers the adult years of Frank Sheeran (Robert De Niro), a World War II veteran, who has seen violence and death in the foxholes of Italy and has led a civilian life also fraught with danger. We first meet an aged Frank in a nursing home slumped in a wheelchair as he narrates most of the movie, a story that encompasses crime, politics, the Teamsters, the Mafia, Washington intrigue, Castro’s takeover of Cuba, Robert Kennedy’s war on crime, and J.F.K.’s assassination.

“The Irishman” is based on the book “I Heard You Paint Houses” by Charles Brandt and adapted for screen by Steven Zaillian (“Schindler’s List”). The title refers to the protocol for asking a man if he is available for nefarious activities that could include destroying property or even committing assassinations. Having begun as a delivery man hefting sides of beef to butcher shops, Frank soon falls in with the Bufalinos, a Philadelphia mob family. Arraigned for stealing a delivery load, Frank is defended by lawyer Bill Bufalino (Ray Romano) and becomes friends with Bill’s cousin, Russell (Joe Pesci), whose power in the underworld is indisputable and who leads Frank down a financially lucrative but dangerous road.

Russell is married and disappointed that he does not have children, but he becomes godfather to one of Frank’s daughters and hopes for the approbation of another daughter, Peggy, who ironically becomes the conscience of the film. Even as a little girl, Peggy views suspiciously the manner in which her father carries out Russ’s biddings, as she watches him leave for work at all hours carrying a mysterious bag. The themes of good and evil, sin and redemption, weave their way throughout this film as Scorsese juxtaposes religious rituals with startling killings. These Mafia families attend church and participate scrupulously in the traditions of baptisms, weddings and burials. Most of the Mafia wives have small roles and are depicted worrying about whether they can smoke inside the car even as they turn a blind eye on the treachery and violence their husbands are perpetrating.

One of the most important figures in Frank’s recollected years with the Mafia is Teamster boss Jimmy Hoffa (Al Pacino). Although famous and powerful, even Hoffa is somewhat beholden to Russ. Opposite in personality, Hoffa is a presence who insists on being the center of attention under all circumstances. He lets no one forget that he is in charge of the Teamsters Union and no decisions will be made without him. Yet he trusts the quiet competence of Russ, who introduces him to Frank and encourages Hoffa to use Frank for difficult jobs.

Frank’s first assignment from Hoffa is to drive a truckload of armaments to Florida, where he will be met by a guy named Hunt “with big ears.” As somber as the tone of “The Irishman” is, many odd moments of unexpected humor do erupt. When Frank looks hesitant to hand over his load to a man whose ears appear normal, Hunt growls, “So you expected a man with big ears, but I had an operation.”

We later learn that Hunt is the E. Howard Hunt of Watergate scandal and that the armaments Frank was delivering that day were destined for the failed Bay of Pigs invasion of Cuba. Because Hoffa is involved in so many political events and because the Mafia is so opposed to Castro’s takeover in Cuba, we see the film make connections that may have been exaggerated in Frank’s recalled narration. However, it seems accurate when we are told that the Mafia was opposed to Castro’s takeover because they were hoping to build and operate gambling casinos in Cuba. With all of the killings, corruption, and mysterious disappearances in “The Irishman,” the movie never dwells on the violent acts. Instead, Scorsese maintains a contemplative mood that invites reflection on crime, personal choices, family loyalties, mob ethics and the meaning of life.

The movie can be seen in theaters and on Netflix. 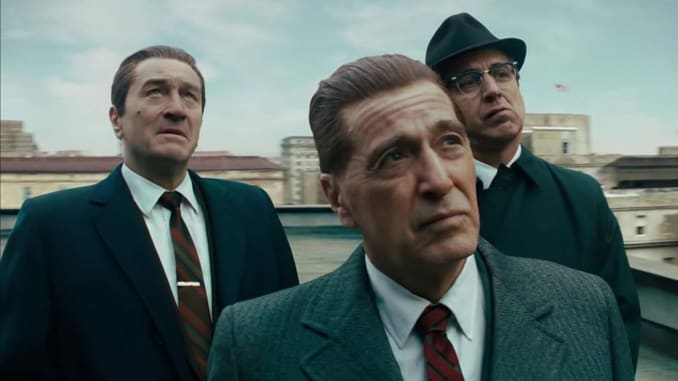