On the Demise of OC Weekly

Dear Sirs: I wish to express my abhorrence of your communist rag. Were I to wipe my backside with your paper, I would consider it an act too dignified…Your left-wing, secular politics disgust me…You are hate-filled and self-loathing and, as a result, you despise America, the capitalistic spirit and Christianity.”

Letters like that 2001 gem were no strangers to readers of OC Weekly, at least before the immediacy of typing an email and pressing send was supplanted by the instant gratification of posting a comment  But for every letter aghast at the fleshy display ads and saucy personals in the back, and the adversarial, hold-no-punches,  frequently-but-not-always-left-of-center journalism in the front, there were just as many thanking it.

Thanking it for freeing innocent people wrongly convicted; for toppling corrupt politicians, including sending a former OC sheriff to jail; for exposing malfeasance in the OC District Attorney’s office; for raising a delirious, defiant middle finger to whatever passed as the establishment, be it former U.S. Congressman Bob “B-1” Dornan, the Irvine Company, the official narrative of a county that whitewashes its racist past, or  the rodent empire nesting at its center. And for giving voice to the marginalized and telling the stories about this county and its people that other media outlets wouldn’t touch.

Rebellious reckless, ridiculed and respected, OC Weekly was something few people thought would take in 1995. But it didn’t just last; it thrived, documenting, and maybe helping effect, this county’s transformation, or the perspective thereof, from a white, conservative bastion where nothing interesting happened, into an ethnically diverse, culturally rich landscape that resists all stereotypes.

And it was very good at what it did. At its peak, few outlets could match its blend of investigative journalism, outrageous humor and columns, longform features and news, foods and art coverage. It had swagger and attitude, smart, talented and award-devouring journalists, a voice, and a mission to, in the words of one of its editors, Gustavo Arellano, “save Orange County from itself.” 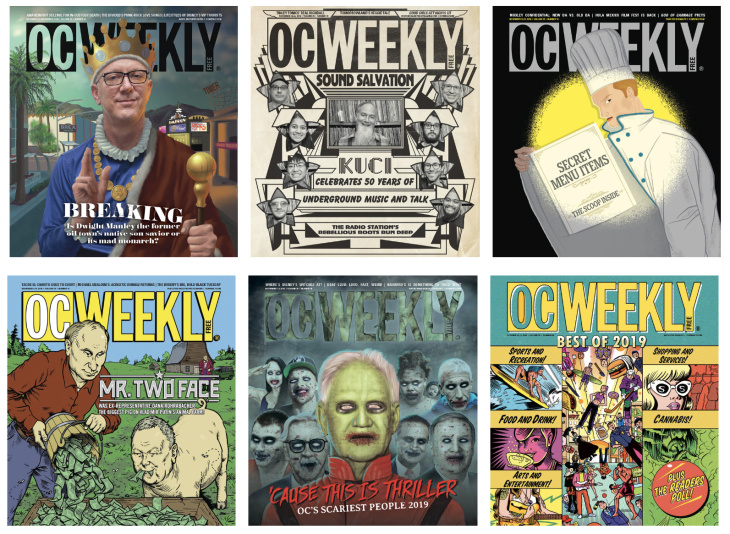 But it all ended the day before Thanksgiving, when its fourth owner—the first based in OC—announced its immediate closure. The timing was atrocious, the news sudden. But not entirely unexpected. Though an alternative newspaper—alternative long before the truncated version of the word defined the transparently agenda-driven media outlets of Breitbart and its ilk—the Weekly’s demise was ironically delivered by the same forces laying waste to what its language, advertising, content and irreverence were truly alternative to: mainstream newspapers. Its business model of relying solely on advertising was blown apart; first by the loss of classified ads to sites like Craigslist, followed by its personal ads, and then  display advertising either migrating to the Web or disappearing, such as the independent retailers (remember Tower Records?) drowned in the wake of Amazon. The economic hits were compounded by the simultaneous erosion of trust in, and relevance of, newspapers. In an age when our Twitterer-in-chief labels it as the enemy of the people, social media increasingly the medium, and cell phones the conduit, where people get their “news,” of information overload and user curation of news, the role of journalism, whether print or digital, as an indispensable facet to an engaged and well-informed citizenry is under assault from multi directions.

But the why of the Weekly’s death is less important than the what. And that what, for Orange County, means two media outlets remain that even pretend to cover the county as a whole: The Register,  a shadow of itself under the thumb of its hedge fund owners; and the Voice of OC, a non-profit website that does great work, but is the last light flickering in what is rapidly resembling a news desert (Fullertonians: you are fortunate for having the Observer and the student newspapers at Fullerton College and CSUF).

So shed a tear for that commie rag if you want. I know for my part, as the only person other than Patrice Marsters whose name was in the staff box every single issue–hers an an editor, mine as a contributor –it’s the closest thing I’ve ever felt to a death without someone actually dying. But save a tear for the stories that won’t be told. The governmental corruption that won’t be exposed. The dirty cops who get away with it. The skinheads, lawyers, developers and other douchebags who won’t be called out. The local band or hole-in-the-wall restaurant that will never get coverage. The marginalized and overlooked. The under-represented and forgotten.

For 24 years and three months, OC Weekly strived to live up to that highest of journalistic callings: to afflict the comfortable, and comfort the afflicted.

And it raised a lot of hell while doing so.

Its death diminishes us all—even its biggest haters.