Democratic presidential candidate Bernie Sanders held a rally at Valley High School in Santa Ana on February 21, drawing a diverse crowd of around 4,000, many of them students of color.

Mike Rodriguez, who teaches high school in Santa Ana, was at the rally, volunteering for the campaign.

“Bernie’s message is resonating big time with Latinos in Orange County—just the fact that he’s calling for a living wage of $15/hour throughout the country,” Rodriguez said. “As a teacher in Santa Ana, I see a lot of parents with two jobs, I see students who are working while they’re going to high school to help with their families…And I think that [Sanders’] message is resonating with Chicanos and Latinos in the United States.”

Alicia Rojas, a Santa Ana organizer and artist, was also out volunteering for Sanders.

“It’s huge for Bernie to come to Santa Ana. Latinos are a big untold story in this election. The campaign came out here 8-9 months ago to make connections with the community,” Rojas said. “As an immigrant myself, that is huge and beautiful that he’s actually coming here, and coming to a high school.”

Before the rally, Sanders held a press conference to discuss specifically the situation of No Party Preference (NPP) voters in California, which are the second largest voting bloc in the state, behind Democrats, and the fastest-growing part of the California electorate.

“It is critical that the voices of independents, of people who have No Party Preference be heard. Yet many NPP voters do not know that they need to request a Democratic Party crossover ballot in order to participate in the Democratic primary,” Sanders said. 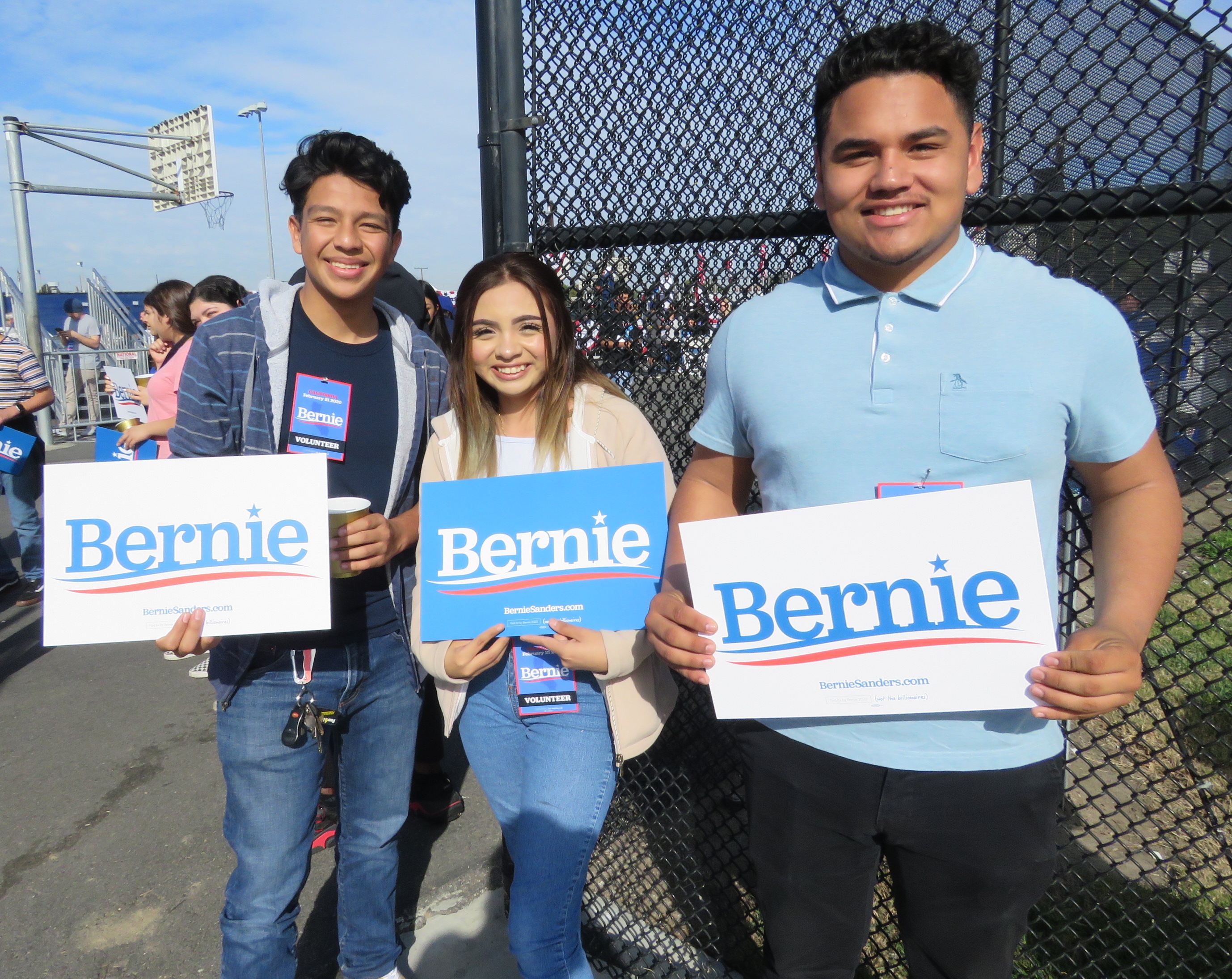 Voters can do this either by contacting the OC Registrar of Voters, or may simply request the crossover ballot at their local Vote Center. For more information visit http://www.ocvote.com.

The opening speakers at the rally were largely local leaders, representing a diverse coalition of community organizers.

Jocelyn Garcia, the student organizing manager for the Sanders campaign said, “I am the proud daughter of Mexican and Guatemalan immigrants. And I am a 25-year-old working class American. My parents left their countries before they were 18, fleeing violence and poverty. My parents are a housekeeper and a gardener, and the hardest working people I have ever met. I joined this campaign because Bernie Sanders is the only candidate who has consistently fought for my parents.” 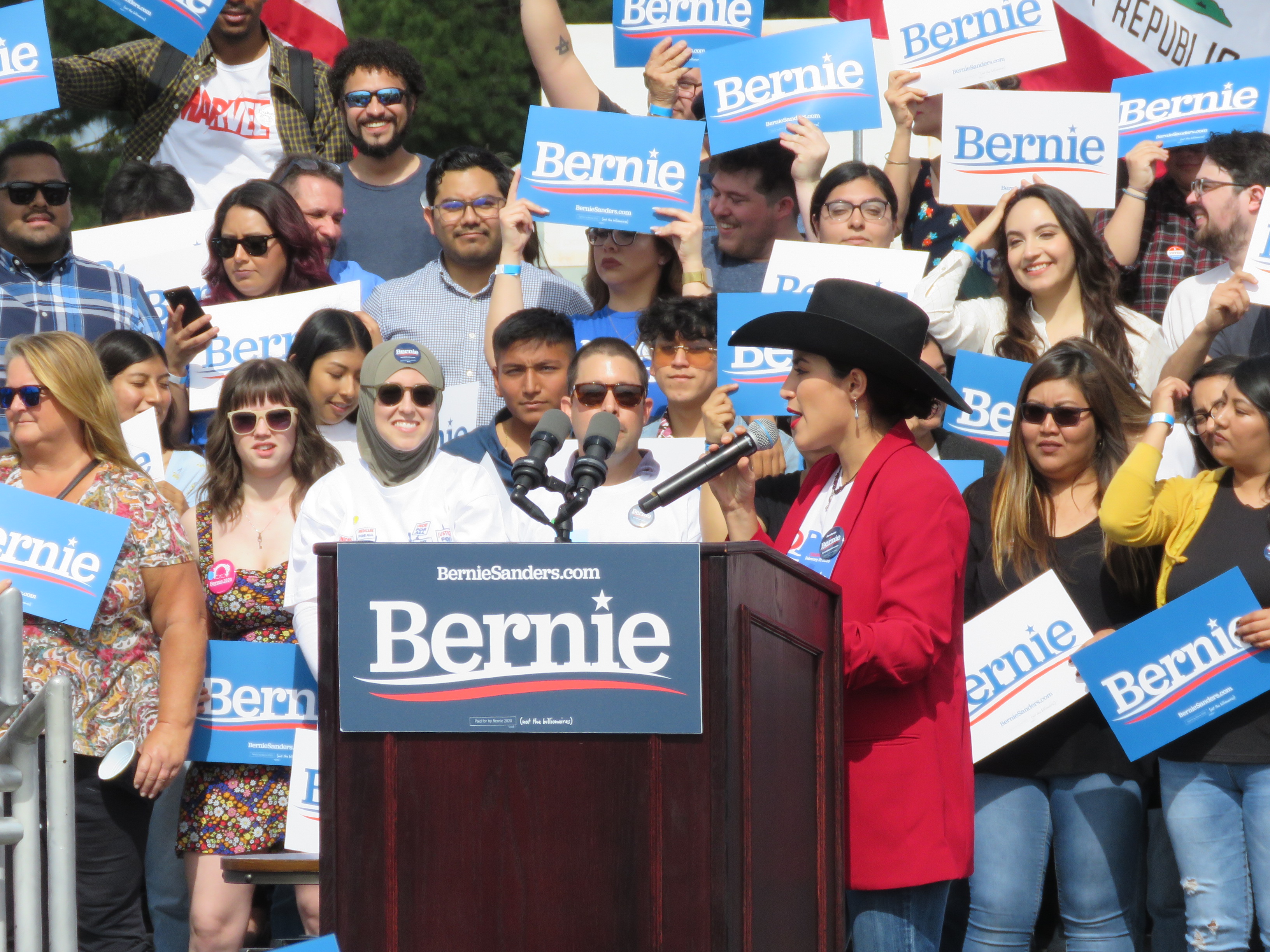 Jocelyn Garcia, the student organizing manager for the Sanders campaign,

Tracy La, a Vietnamese American youth organizer from Garden Grove said, “I am the proud daughter of Vietnamese refugees. I come from a low income working class background where my parents worked from 8am to midnight six days a week. I saw how prevalent wage theft is on our communities, and how much immigrants, especially those who only speak one language, are targeted and exploited.” 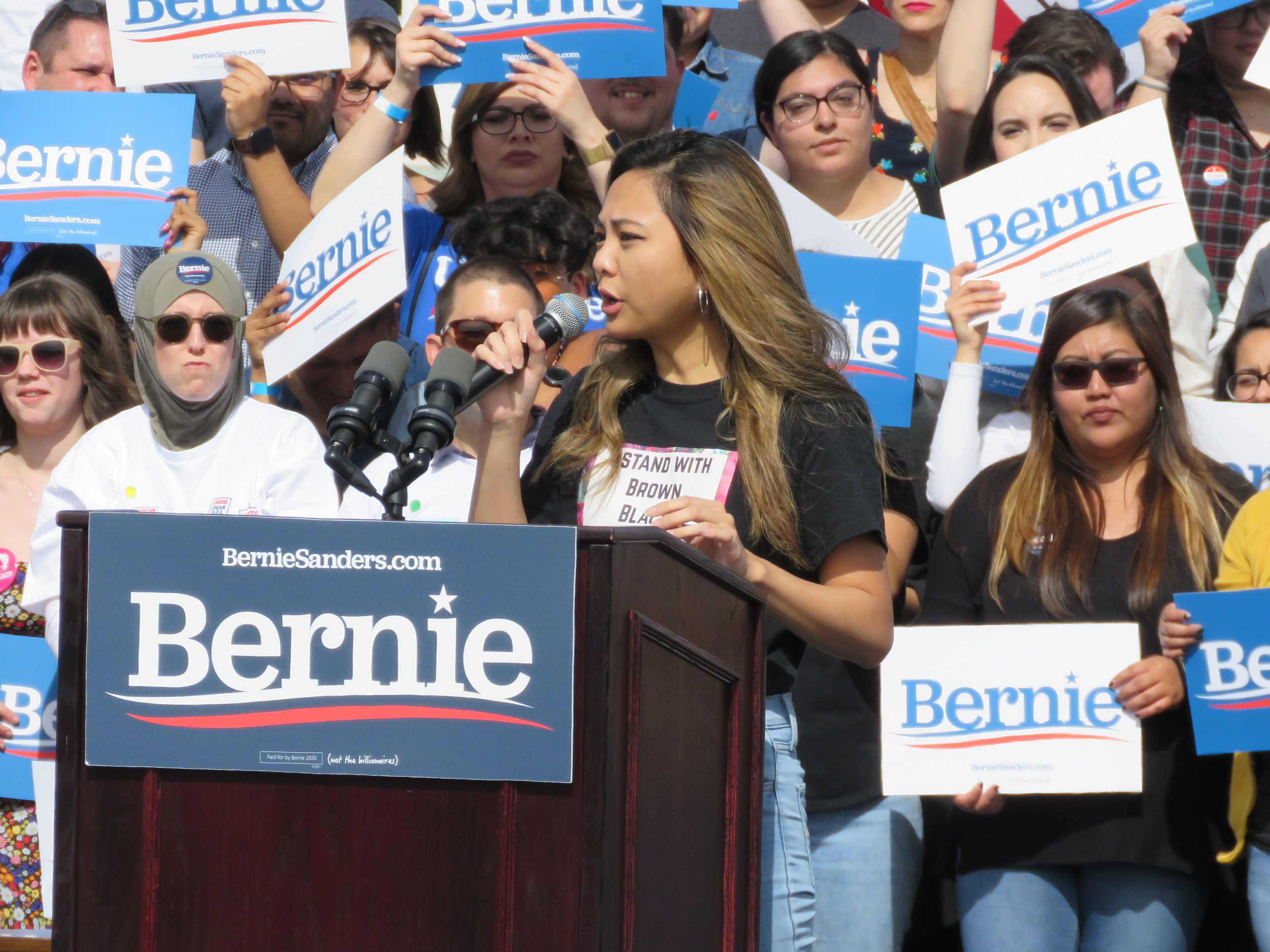 La said that Orange County contains “Little Saigon” which is one of the largest Vietnamese American communities in the United States.

“What happens here in this county sends ripple effects across Vietnamese communities around the country. I believe that it is important for people who look like me to uplift the issues that our communities are facing and to celebrate the people who are fighting for justice and human rights in our communities every day,” La said. 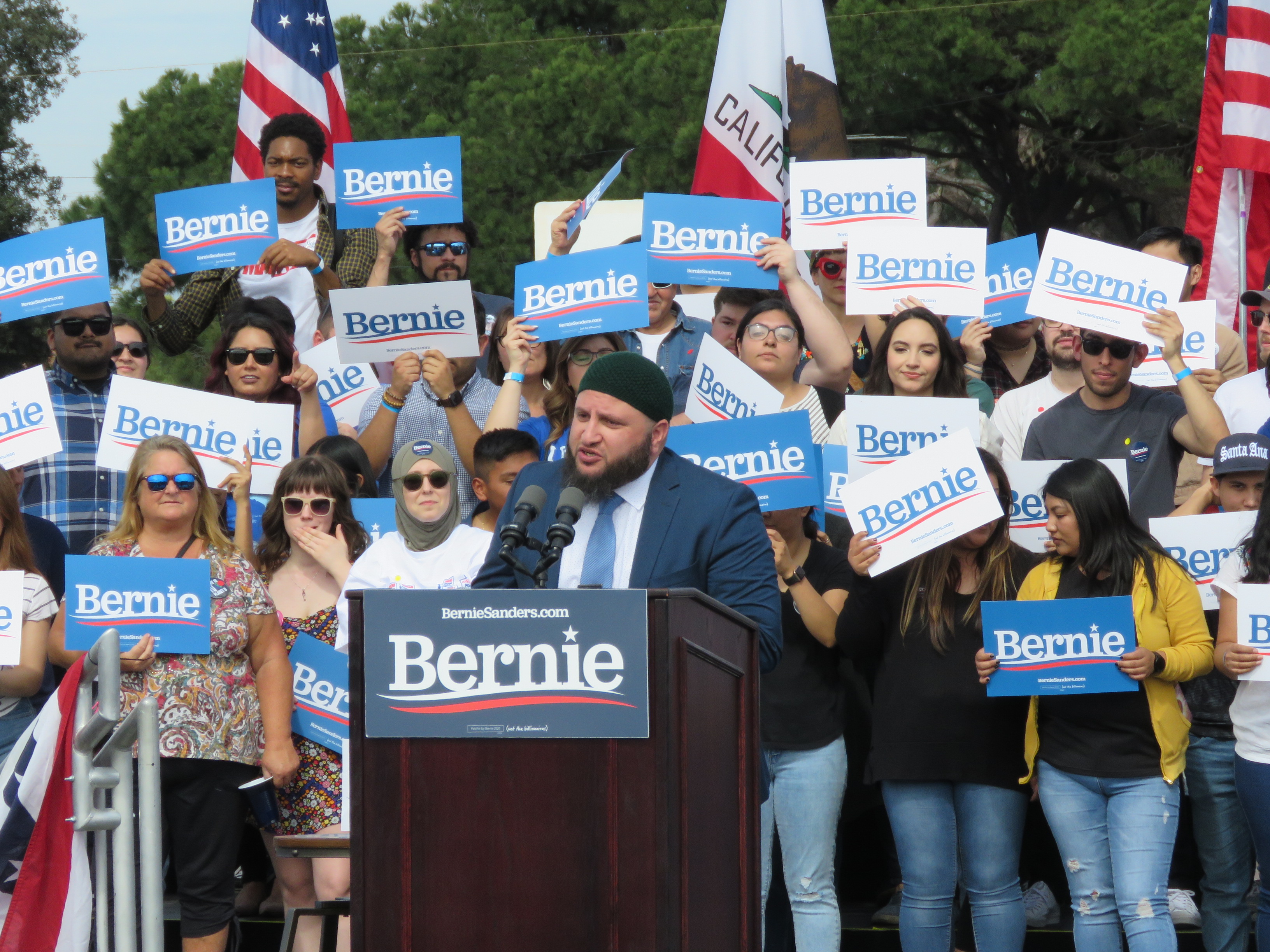 Nawabi called the Sanders campaign “the most multi-racial, multicultural, multi-generational movement ever in American history.”

“I want you all to look around you,” Nawabi said. “This is the great diversity America is about.

Nawabi talked about Islamophobia in America, and discrimination Muslim Americans have faced under President Trump, and previous administrations, with such policies as the Muslim travel ban, the PATRIOT Act, and the Iraq War.

As with previous speakers, Briceno addressed her immigrant experience, which resonated with the Santa Ana audience, a city that is majority Latino. 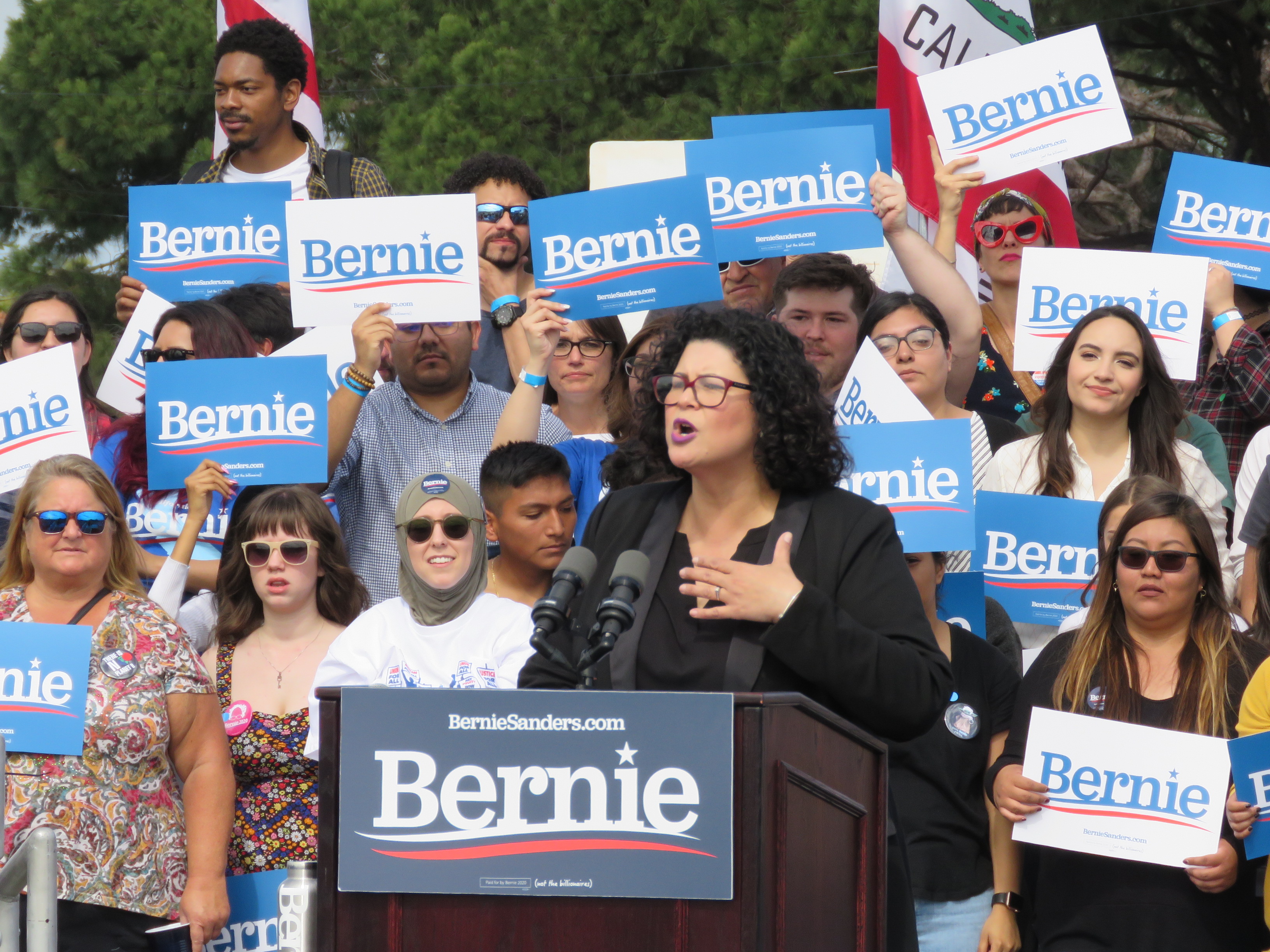 “I came to this country when I was six years old, when my family fled a brutal civil war in Nicaragua,” Briceno said. “I got my start as a hotel worker, and for nearly three decades I’ve been standing uo for social justice and workers rights.”

“He stood with our workers and took on Disney, one of America’s most powerful corporations. He came here to Orange County to have a town hall with us,” Briceno said. “He carried our workers’ message across the nation for months. And with his help, we won.”

Sanders then took the stage to John Lennon’s song “Power to the People.” 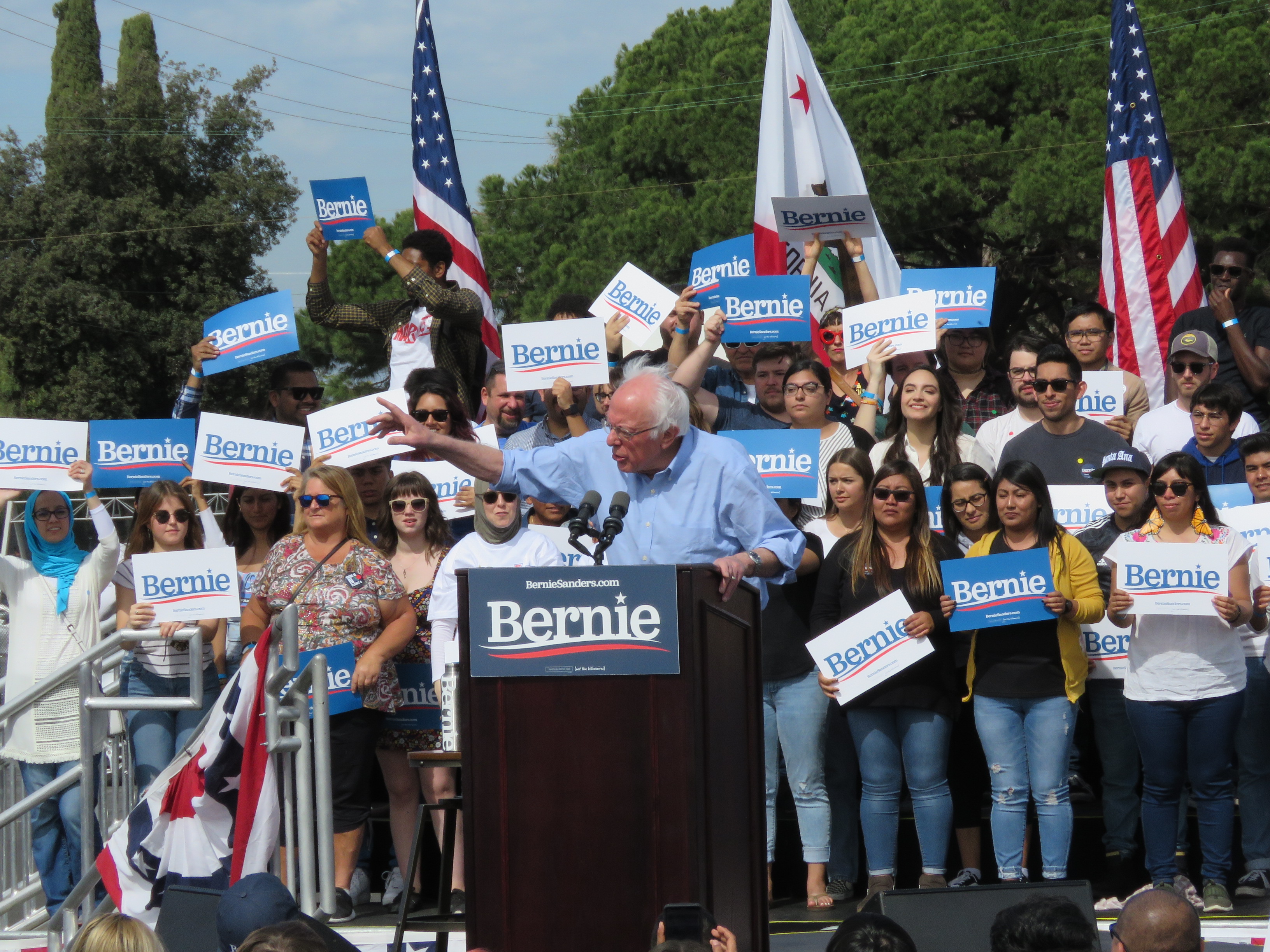 His speech laid out his signature policy proposals, including Medicare for All, the Green New Deal, raising the federal minimum wage, equal pay for equal work,  tuition-free college, comprehensive immigration reform with a path to citizenship and protection for DACA, and ending private prisons and detention centers.

“We want an administration that understand that we are going to bring our people together, not divide us up. Black, white, Latino, Native American, Asian American, gay and straight—we’re going to create a government and an economy that works for all of us, not just wealthy campaign contributors…In the richest country in the history of the world, we can provide a decent life for all our people.” 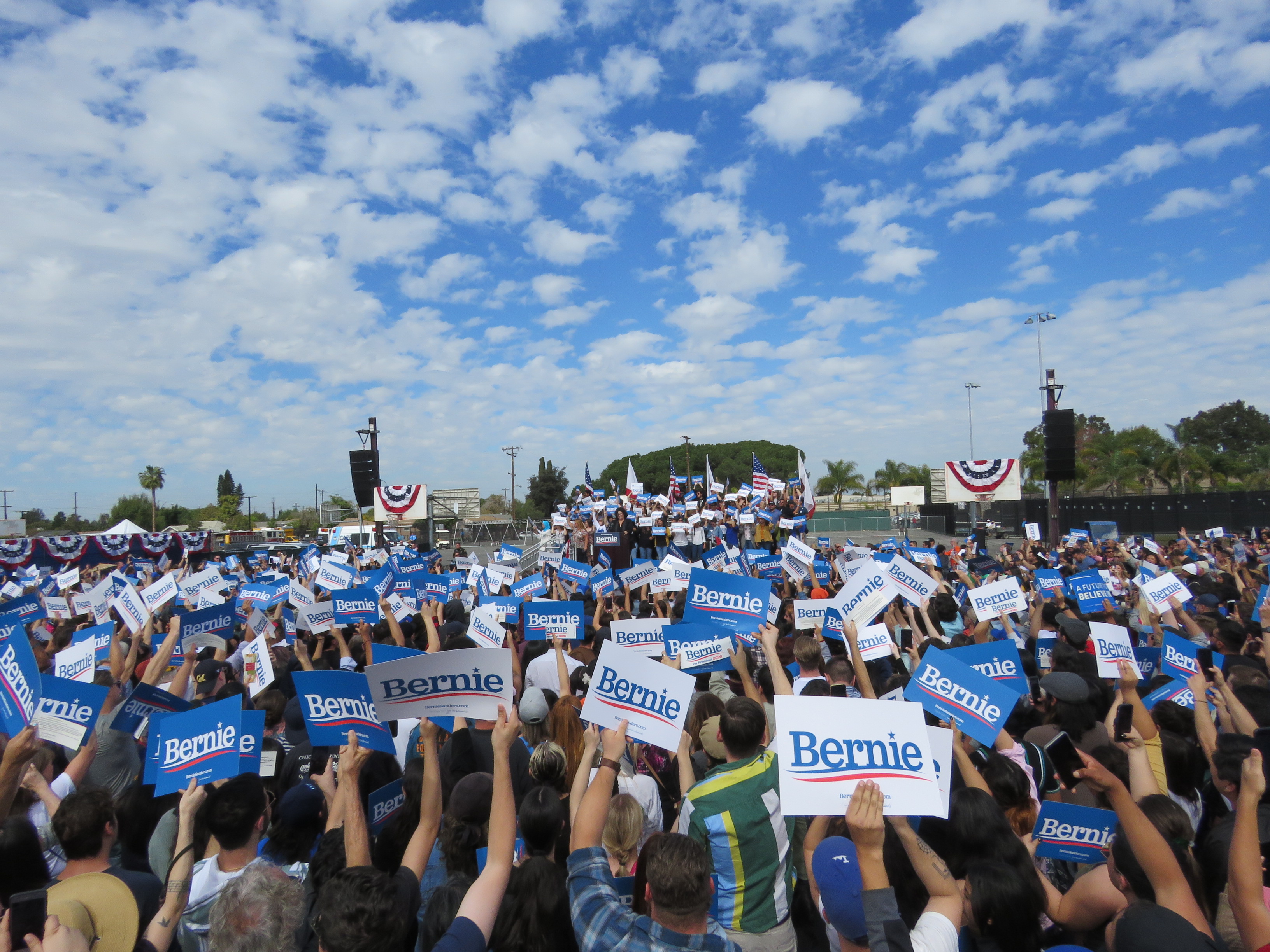