Peering at the Past of the Pierotti House

Where Yorba Linda Blvd. meets Bradford Avenue, close to the border of Fullerton and Placentia, there’s a house hidden from the street and the surrounding neighborhood behind fencing and high shrubs. A brown sign in the middle of the road points to a historical landmark behind a gate that has been closed for a long time. Behind those gates is the Pierotti House, one of the finest examples of Neo-Classical residential architecture in the Fullerton area. 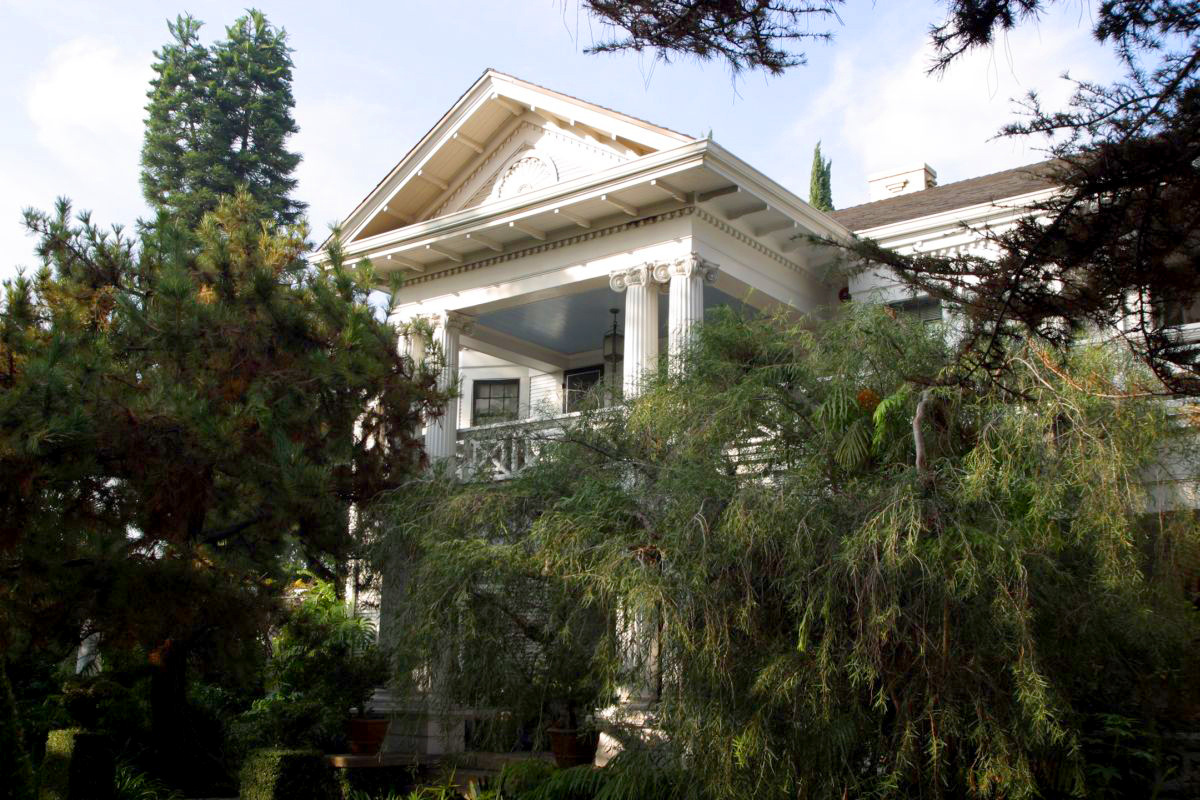 The Pierotti House is one of the finest examples of Neo-Classical residential architecture in the Fullerton area.

Designed by Charles Shattuck of Los Angeles, the two-story redwood-sided house features a variety of diverse architectural elements. We can tell what types of architectural elements make up the house by looking back at historical photos from the Fullerton Public Library Local History Room. Prominent among these are two pairs of fluted Ionic columns made from redwood, which support a richly detailed pedimented portico. According to the city of Fullerton website, “the front balcony extends out to form the top of the porte-cochere. Palladian-style fans accent some of the windows, and the variety of bays and window arrangements contributes to the appearance of intricate detailing. The interior features rosewood paneling, ceiling beams and cabinetwork.” Interestingly, the house was built with a cellar that still contains a coal-fired furnace to heat the rooms above. The grounds contain gardens, a sunken court, and some of the original orange trees planted by Mr. Pierotti. 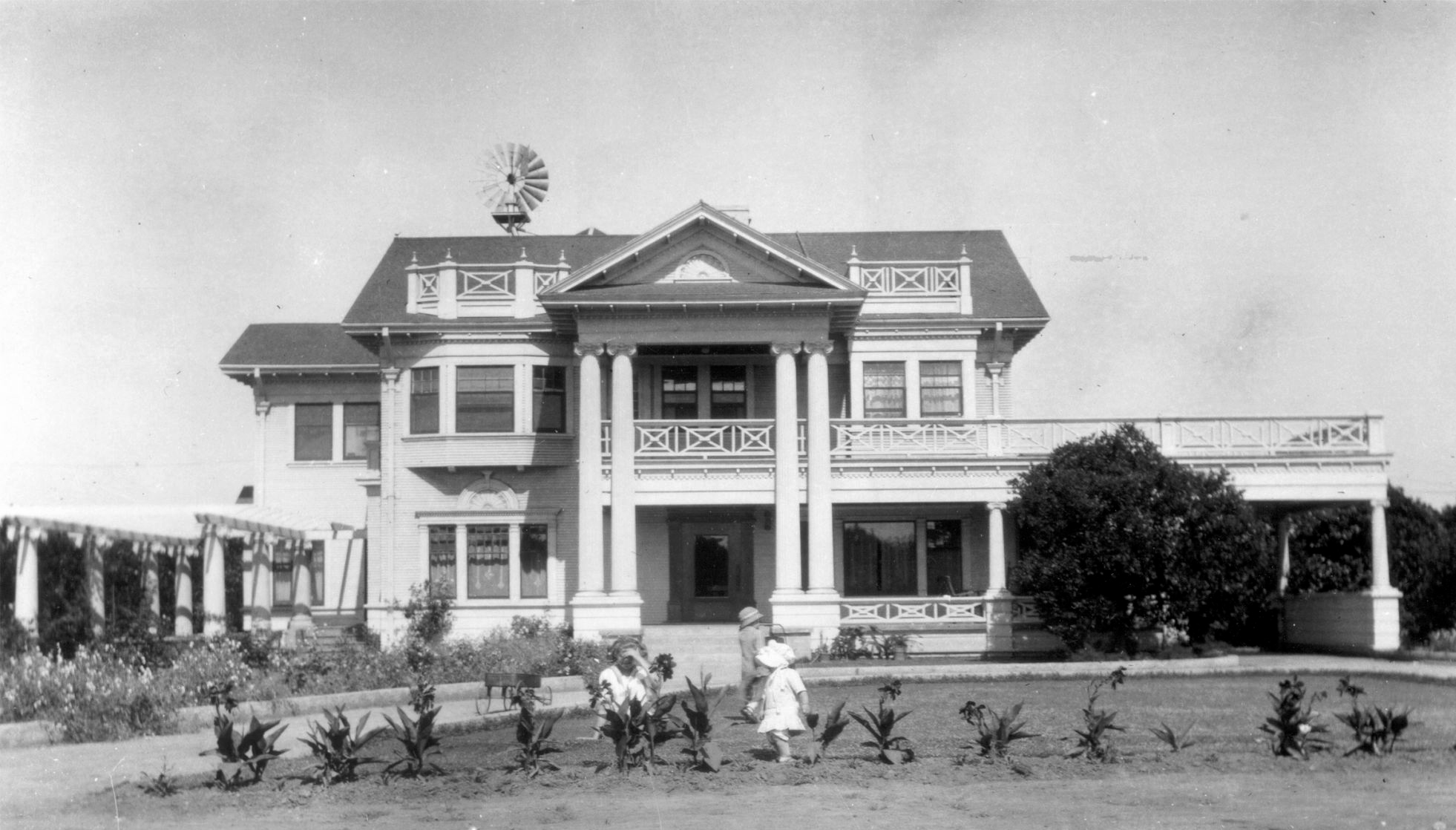 After doing further research into the house’s history, I learned that the Pierotti family was one of the earliest to settle in the Fullerton-Placentia area. Attilio Pierotti played a key role in the development of organized packing, shipping, and marketing of citrus from the area. Born in Lucca, Italy in 1857, he came to the United States in 1874, and settled in Orange County two years later. By 1909, he had acquired forty acres of land and had enjoyed enough success in the orange-growing business that he was able to build his two-story house for his wife, Jane, and their four children.

According to the City of Fullerton website, “Mr. Pierotti commissioned Charles Shattuck to design and supervise the construction of the house.” Shattuck was a prominent architect from the Los Angeles area for over fifty years. According to the National Register of Historic Places, he came from New Hampshire in the early 1880s and practiced in Los Angeles until his death in November of 1944. He is noted for designing several large business structures in LA, including several country clubs, the City’s first produce market, and its first mausoleum. While the Pierotti House was under construction, Shattuck travelled from Los Angeles at least once a week to personally monitor its progress.

Mr. Pierotti was also actively involved with the business affairs of the community for many years, and his wife promoted many cultural activities in the area. Their house was frequently used to entertain prominent local persons and friends from Los Angeles, where the family had many social connections. 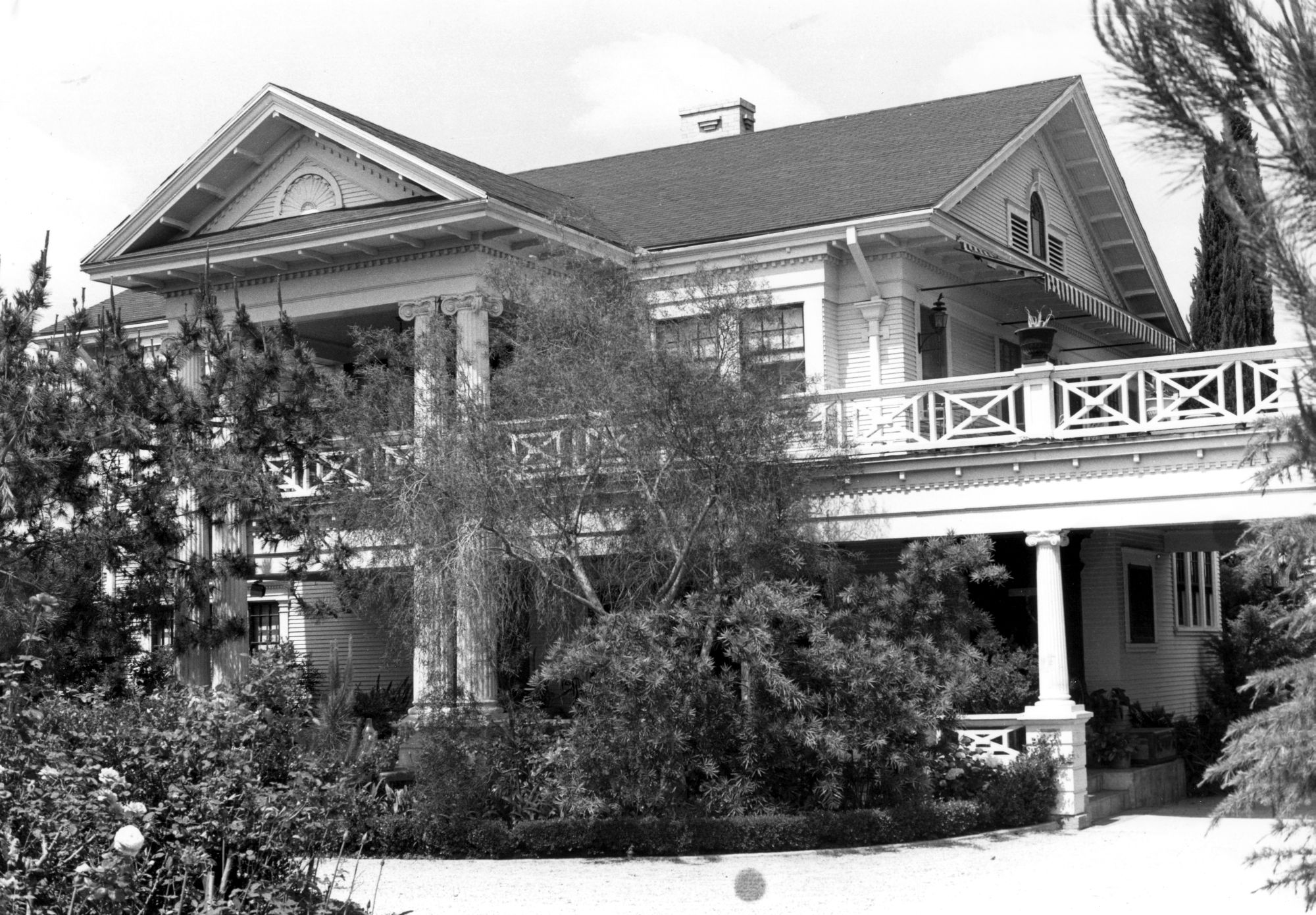 According to the National Register of Historic Places, “Mrs. Pierotti, after a visit to Lucca, Italy in 1927, designed the gardens around the house to reflect what she saw there. The gardens have matured under the careful management of her daughter, Leonora Pierotti. The formal sunken garden with its fountain and steps, the border of rose bushes along the driveway, and the majority of the shrubs, had been planted. Among the Valencia and Naval orange trees in the southwest corner of the property, thirteen are almost 90 years old. Other fruits include lime, lemon, grapefruit, tangelo, avocado, fig, plum, peach, kiwi, apple and persimmon trees. King Palms, purchased from the Huntington Library in San Marino, are among several species of palms which still survive. The layout of the gardens provides for small intimate spaces with a high degree of privacy on the north and south sides and a magnificent formal sunken garden in the front (east) yard.”

Looking back at a few forms from the National Register of Historic Places, I learned that there are around thirty to forty neoclassical residences in Fullerton, Placentia, Yorba Linda, La Habra, Brea, and Anaheim, but most are single-storied and modest in form. The Pierotti House was a departure from the typical Craftsman Bungalows and Colonial Revival grove houses being built between 1900 and 1920. Those built after 1920 were mostly Spanish Colonial in style. It’s important to mention that grove houses were the center of the 10 to 20 acre citrus ranches that covered much of North Orange County. Citrus was the prime industry that provided the economic force to sustain these towns. The large ranch homes were a visual statement that revealed the prosperity and fine lifestyle of the successful ranchers.

Fullerton and Placentia have been entwined since Fullerton was founded in 1887. Placentia, the town, was not founded until 1910, years after the Placentia School District was started by local ranchers in 1874. Local families went to Fullerton for their town needs and to attend high school. The Pierotti House is legally in Fullerton, but the family has always considered itself as part of Placentia.

According to the National Register of Historical Places, “Mr. Pierotti was one of six to eight prime movers in the Fullerton-Placentia area. Their names have shown up on the founding boards of almost every packing house, bank, school board, water company, community organization, and executive board. Mr. Pierotti was one of the founders of the first packing house in the area, the Placentia Orange Growers Association, founded in 1910. The need for the association was inspired by the low prices paid and unfair shipping practices in existence at the turn of the century. By banding together and forming their own packing, marketing, and shipping facility, the citrus growers were able to become more successful in their industry.” 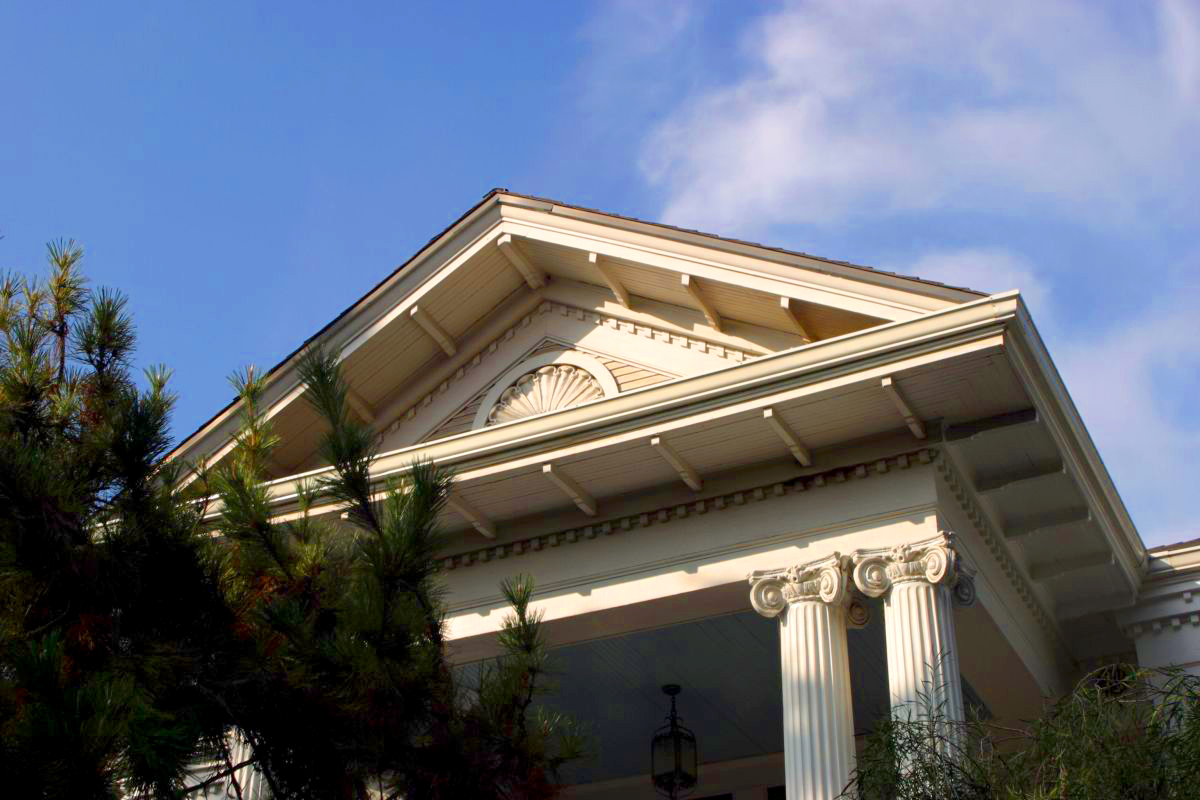 Mr. Pierotti was also well known for his work with water and water rights. He was able to help shape early water policies and distribution. Serving on the Anaheim Union Water Company board for several years enabled him to be a part of North Orange County water distribution.

He was a very influential person in the community. Not only was Mr. Pierotti one of the directors who helped found the Farmers and Merchants National Bank in Fullerton in 1904, but he was also on the board of the Bank of Italy in Placentia. As influential citizens often did, he served on the boards of the Placentia School District and the Fullerton Hospital Association. He served as president of the hospital board in the early 1910s. Mr. Pierotti undoubtedly provided much service to the citrus industry and local civic organizations. He was still active in various activities until his death in 1939.

According to the city of Fullerton website, “Today, the Pierotti House is still owned and used as a residence by the Pierotti family.” I emailed Cheri Pape, Local History Archivist at the Fullerton Public Library, to see if she happened to have any contact info so that I could get in touch with the family members who still maintain the house. Pape said via email, “As far as I am aware, it is still owned by members of the Pierotti family, but I don’t have any contact info for them. We were updating photos of historic buildings last year [2018] and we were unable to get in touch with anybody. The grounds were so overgrown, they needed to get on to the property to get photos, but we never could.” Fortunately, she was kind enough to send some older photos of the house my way.

When I went to look at the house from the outside last fall, there was an OC Parks sign which read, “In March 2014, the 5.1 magnitude La Habra Earthquake caused structural and cosmetic damage to the house. After extensive studies and plans were completed, work started in January 2019 on structural seismic improvement repairs, and to provide additional accessibility.” The historic house and grounds were expected to reopen to the public in the fall of 2019, but as of now, it still appears that the gates are closed.

To see historic photos of the Pierotti House and Gardens that I obtained from the Library’s Local History Room, visit http://www.fullertonobserver.com and click the tab labeled “Local.” Underneath that tab, click on “Emerson Little YouTube Channel,” which will take you directly to my page.