Orange County’s Healthcare Agency continues to update the public about their response to the COVID19 pandemic throughout the County. During live press updates over the past two weeks, County officials announced the formation of an Economic Recovery Task Force, gave a brief overview of how federal monies would be spent, and announced the hiring of a new OC Healthcare Agency (OCHCA) director, as well as the imminent retirement of another important official.

Officials refer to statistics posted daily to a county website: http://www.occovid19.ochealthinfo.com/coronavirus-in-oc. The number of infected persons was over 2,500 (as of May 2) and is increasing daily, as is the number of deaths, with over 50 as of May 2. With a population of over 3 million, the number of reported deaths in OC is far less per million than that of Los Angeles County, where over a thousand deaths have been reported per 10 million.

The daily number of hospitalized cases in Orange County has risen over time, with a current high of 178. Fewer than half of these cases are in ICU each day. Officials believe there is a sufficient number of hospital beds across the County for expected increases in serious infections, but some facilities still lack critical supplies, including ventilators for the most seriously ill patients.

County government does not reveal in what cities patients have died from COVID-19, but it does post a count of cumulative known cases of infections per city, also updated each day. Fullerton, with a population of 142,824 has seen its total creep up day by day to over 70. The number has risen by a few each day it is reported. County Health Officer Dr. Nichole Quick continues to stress that the numbers of infections known in specific cities should not be interpreted to mean that one city is necessarily safer than another, as individuals may have contracted the virus in a different city or county from where they live.

Critical to tracking and stopping the spread of COVID-19 is a greatly increased capacity for testing. The County has tested over 26,000 people, but would need to test far more in order to reliably assess whether or not the spread of the disease has been slowed enough to reopen businesses. So far, people who have shown symptoms have been prioritized for testing, but a serological test, which tests for antibodies in blood serum, is planned in conjunction with UC Irvine, which will measure incidences of the viral infection in a more general population of 1,500 subjects.

On April 20, Deputy OCHCA Director David Souleles, who has been a point person in the agency since the resignation of Director Richard Sanchez in March, said the County would be expanding testing in coming weeks with the goal of providing timely tests for any resident who wants to find out if they have the virus. The rollout of a new testing program is expected to provide necessary data to determine when and how businesses and schools might begin to emerge from weeks of closure. The following week the County announced that Souleles had chosen to retire May 1 after a multi-decade career in public health, and that Dr. Clayton Chau, a Fullerton resident, had just been hired to head the County’s Health Care Agency.

Governor Gavin Newsom has announced plans for 80 testing sites throughout the State, several of which, according to Dr. Quick, will be in Orange County, but locations are yet to be confirmed. The tests will be PCRs, with samples collected by swab into nasal passages. The County health lab can have results ready the next business day following a test, but commercial labs like Quest Diagnostics can sometimes take longer to process results because of backlogs.

One particularly important industry where testing is needed is in skilled nursing facilities (SNFs), who are, as yet, not required to test staff for COVID-19, even though large numbers of elderly people, identified as especially vulnerable to suffering the worst effects of the virus, often live and dine in close contact. The State has been tracking SNFs across California for infections among staff and residents. No facilities in Fullerton have yet reported infections, but 9 across the County have. Most are under the State’s threshold of 11 for reporting individual numbers of cases, but four facilities in other cities had from 14 to 45 residents who tested positive. Dr. Quick emphasized that the OCHCA contacts SNFs to offer testing of staff. CEO Kim answered the Observer’s question about whether the OCHCA supported mandatory testing of SNF staff by saying that the facilities would have an incentive to keep their staff members healthy to avoid patient/residents’ deaths, evidently assuming that it would be bad business for them otherwise.

On April 20, 3rd District Supervisor Don Wagner announced the formation of a County Business Recovery Adhoc Committee, which was to begin meeting the following day. The committee included Lucy Dunn of the Orange County Business Council and representatives from the hotel, hospital, entertainment, restaurant, and grocery industries. Wagner was also hoping to recruit members to represent hi-tech businesses and a representative of the Automobile Association. The committee is tasked with helping to formulate a responsible plan for the eventual reopening of the economy, virtually shut down by the current stay at home order issued by the state.

According to CEO Kim, the shutdown will cost Orange County as much as $200 million in lost revenue through June, when a new preliminary budget is due. Although the County has some funds in reserve, he acknowledged that the County has consultants exploring a possible future sales tax. Although the County will receive about $454 million in federal aid to respond to the pandemic, those funds cannot be used to backfill lost revenue. Instead, they are meant to be spent protecting public health, although local government responses to the crises can be reimbursed.

In response to nationally circulated images of large crowds enjoying unseasonably warm weather on OC beaches over the April 25-26 weekend, California governor Gavin Newsom ordered all city, county, and state beaches in the county closed on April 30. His order prompted a statement of disagreement from OC Board of Supervisors Chair Michelle Steel and Sup. Donald Wagner, as well as lawsuits from the cities of Newport Beach and Huntington Beach, whose city councils had pointedly voted to keep their beaches open. County beaches also remain open, though the Board of Supervisors closed parking facilities to discourage attendance, leading some beachgoers to park in adjacent neighborhoods.

Asked for his reaction to the State order, 4th District Supervisor Doug Chaffee, whose district includes Fullerton, told Larry Mantle’s Airtalk radio program that he did think that the governor had the authority to close the beaches because of the special powers conferred upon him during the current emergency, to the point where he predicted that cities suing to keep their beaches open would lose in court. Asked about Supervisor Steel’s April 29 statement that Gov. Newsom’s order was an “overreaction and an abuse of power,” and that she would be looking into an “appropriate response,” Chaffee agreed that Newsom’s order was an overreaction, but reiterated that it was legal. “I would rather that he let us solve our problem first. I think that that is a sensitive point.” He suggested that “maybe he’s forcing us to get together and come up with a common solution among the six cities and counties [?] that have beaches along the coast” in Orange County.

Chaffee said he thought “some kind of activities could be allowed with some appropriate distancing such as walking on the beach.” He cited potential domestic abuse from “families being cooped up,” as a reason to keep beaches open. “Children need a chance to get out and blow off some steam.” He also said there needed to be a “uniform system for how our beaches are to operate. I don’t think it’s good for one city have one standard, another a different one. Then you get confused and you don’t what you can and can’t do.”

In order to avoid inevitable crowding at choke points on or near the beaches, Chaffee suggested establishing a reservation system for beachgoers, comparing it to playing golf or tennis. “If you want to go to the beach we could electronically reserve a time for you, and it might even include some parking to relieve that issue with the local people concerned about parking in their streets. And then when your time is up the next people could come in. We could appropriately mark the beach so that you have social distancing, where people could stay for whatever allowed time there is. I don’t know how quickly that kind of system could be set up, but it might allow for more activities and create social distancing in the process.”

Chaffee also noted Orange County’s relatively low COVID-19 infection and death rates. An April 28 press release from Supervisors Wagner and Steel claimed that OC was “flattening the curve,” but State figures show that hospitalizations in the County are actually on the rise. (See Nick Gerda’s article in the Voice of OC: https://voiceofoc.org/2020/04/coronavirus-hospitalizations-have-been-rising-in-oc-despite-claims-of-flattened-curve/). The Board of Supervisors released a list of best practices for businesses and residents to follow for the eventual reopening of non-essential business and other activities. The list included social distancing, the wearing of masks, telecommuting where possible, the wearing of personal protective equipment (PPE), hand washing, and even having employees’ temperatures taken before they can work. The rules are not meant to try to overrule federal or state guidelines. 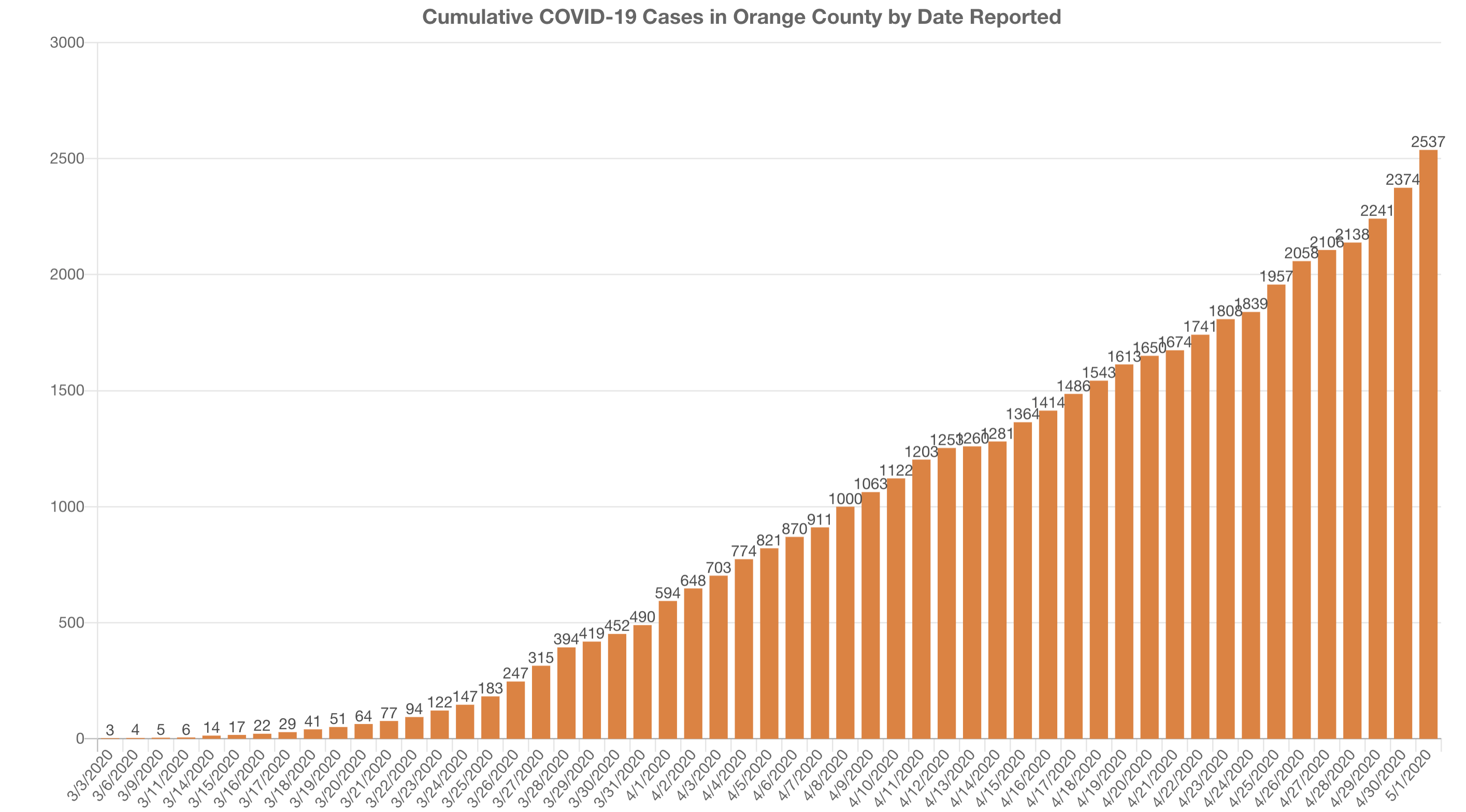