How Fullerton Benefitted from the New Deal

The current coronavirus catastrophe has necessitated government aid on a massive scale. The CARES Act was the largest economic relief package in American history at over $2 trillion.

But this was not the first time the United States government intervened on a massive scale to help keep America afloat in the wake of disaster.

During the Great Depression, president Franklin D. Roosevelt rolled out a series of large-scale relief efforts and began to weave the fabric of a social safety net, some of which still exists today, such as Social Security and the Federal Deposit Insurance Corporation (FDIC).

Roosevelt called it the New Deal. At the time, unemployment had reached 25 percent—the highest in US history so far. Federal programs like the Works Progress Administration (WPA) and the Civilian Conservation Corps (CCC) were created to give people jobs, and to simultaneously build up the country’s infrastructure—new roads, dams, parks, public buildings and more were built. 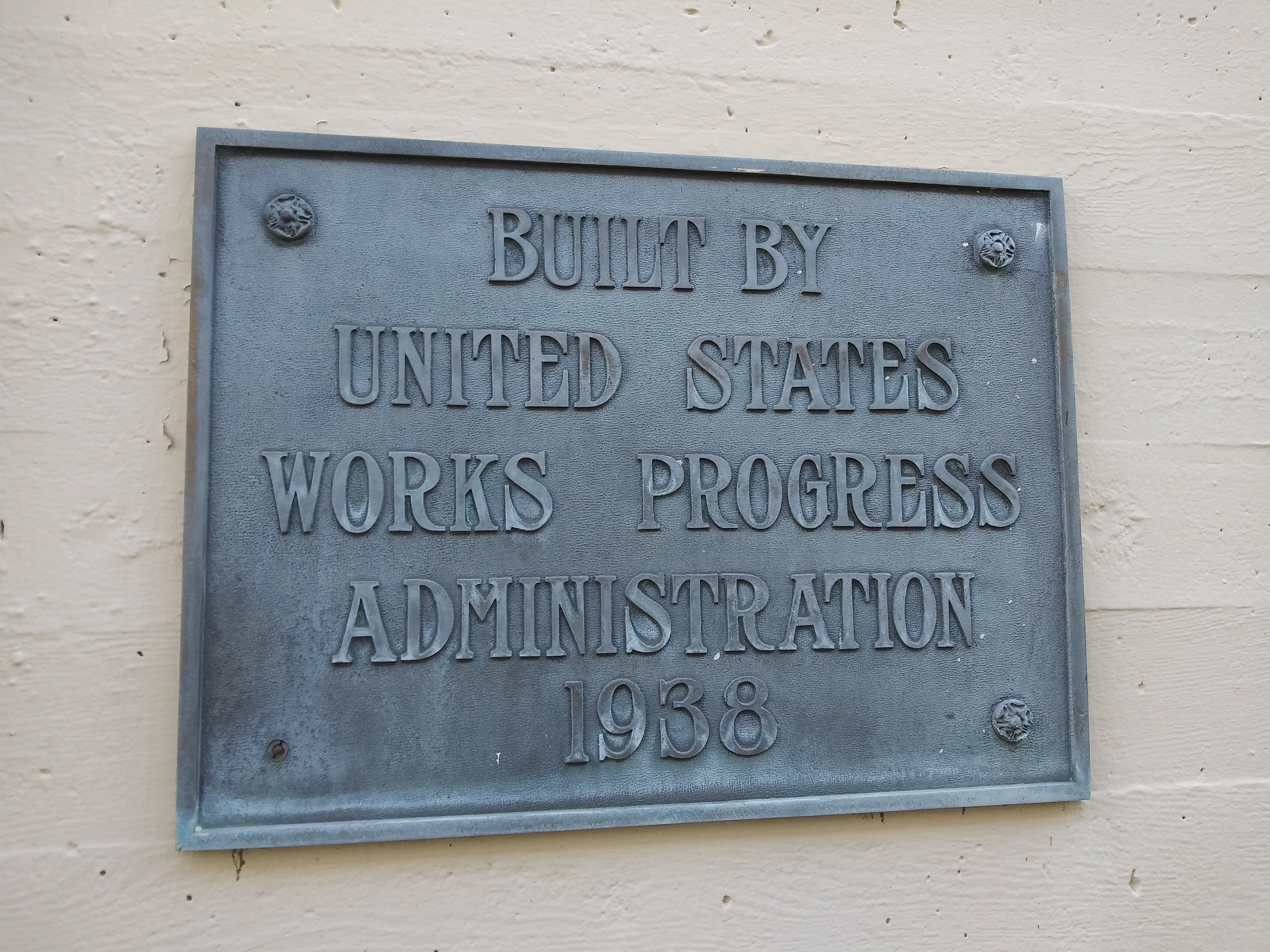 The WPA alone gave over 8 million unemployed Americans jobs in its 8-year existence.

These government programs were not just for laborers. Artists, writers, actors, and musicians were also employed by the WPA to give folks not just jobs, but also hope and beauty in difficult times.

Today, nearly a century later, Roosevelt’s New Deal is primarily remembered in history textbooks and school curricula. But there is another way to remember its legacy—by recognizing the New Deal projects that still exist right where we live.

The city of Fullerton was a major recipient of New Deal funding and projects, many of which still exist today and have become some of the most iconic features of our local landscape.

A few years back, a book came out called The New Deal in Orange County California by Charles Epting. This well-researched and comprehensive book was the first of its kind to document all the New Deal projects in Orange County, city-by-city, including Fullerton. I present here what I learned from Epting’s helpful guide, which has deepened my understanding of my hometown and the programs that helped build it up in the worst of times.

First came the devastating Long Beach Earthquake of 1933, which caused over $50 million in damage and killed 120 people throughout the region.

Then came the 1937 Santa Ana Flood, followed by the 1938 Los Angeles Flood—causing millions more in damage and killing 113 people.

During this flood, “the Santa Ana River swelled to half the flow of the Mississippi River, 317 cubic feet per second, and cities like Anaheim and Santa Ana were flooded with six feet of water.”

These floods not only destroyed buildings, they also destroyed acres of crops, which were the economic backbone of the region.

The following year, 1939, another disaster struck—a tropical storm (the only one of its kind to hit OC in the 20th century), which destroyed several piers and coastal buildings.

“Because of these disasters, nearly every single community in Orange County was profoundly impacted by the New Deal,” Epting writes. “Dozens of schools, city halls, post offices, parks, libraries, and fire stations were built; roadways were improved, and thousands were given jobs.”

“With a population of just over 10,000 in 1930, Fullerton was one of the largest cities in Orange County at the time of the Great Depression. Relief projects were numerous. It is probable that Fullerton received more aid than any other Orange County city,” Epting writes. “What is also unique about Fullerton is that nearly all of its New Deal buildings are still standing and preserved as local landmarks.”

Maple School (244 E Valencia Dr): This school was retrofitted and expanded following the 1933 earthquake. It was partially funded by the Public Works Administration (PWA). It’s an example of Art Deco architecture. Plans were drawn by architect Everett E. Parks. 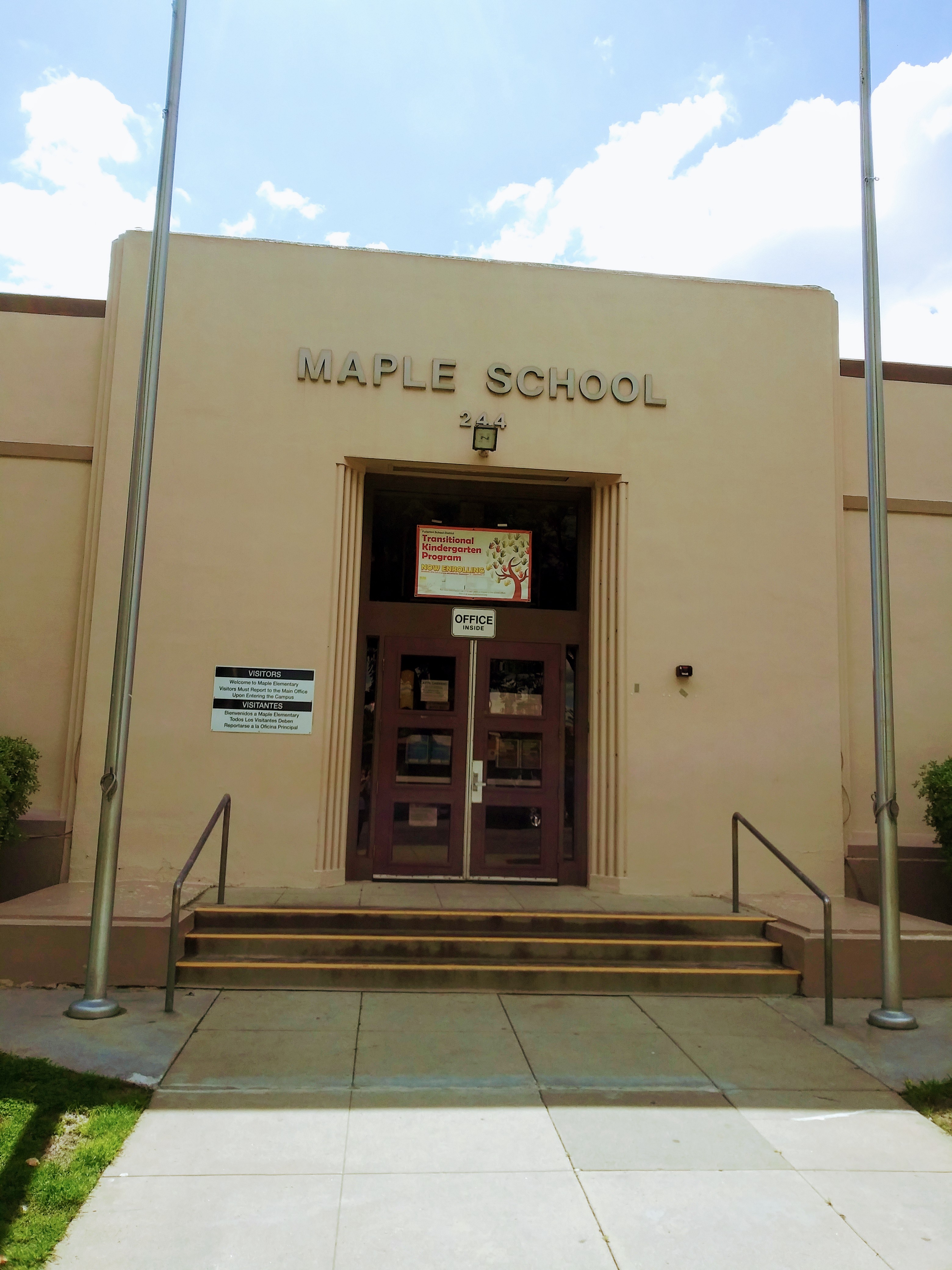 Wilshire Junior High School (315 E Wilshire Ave): Originally constructed in 1921, it was reconstructed and expanded during the 1930s with PWA funds. The style is Deco/Greco. Now it’s the School of Continuing Education. 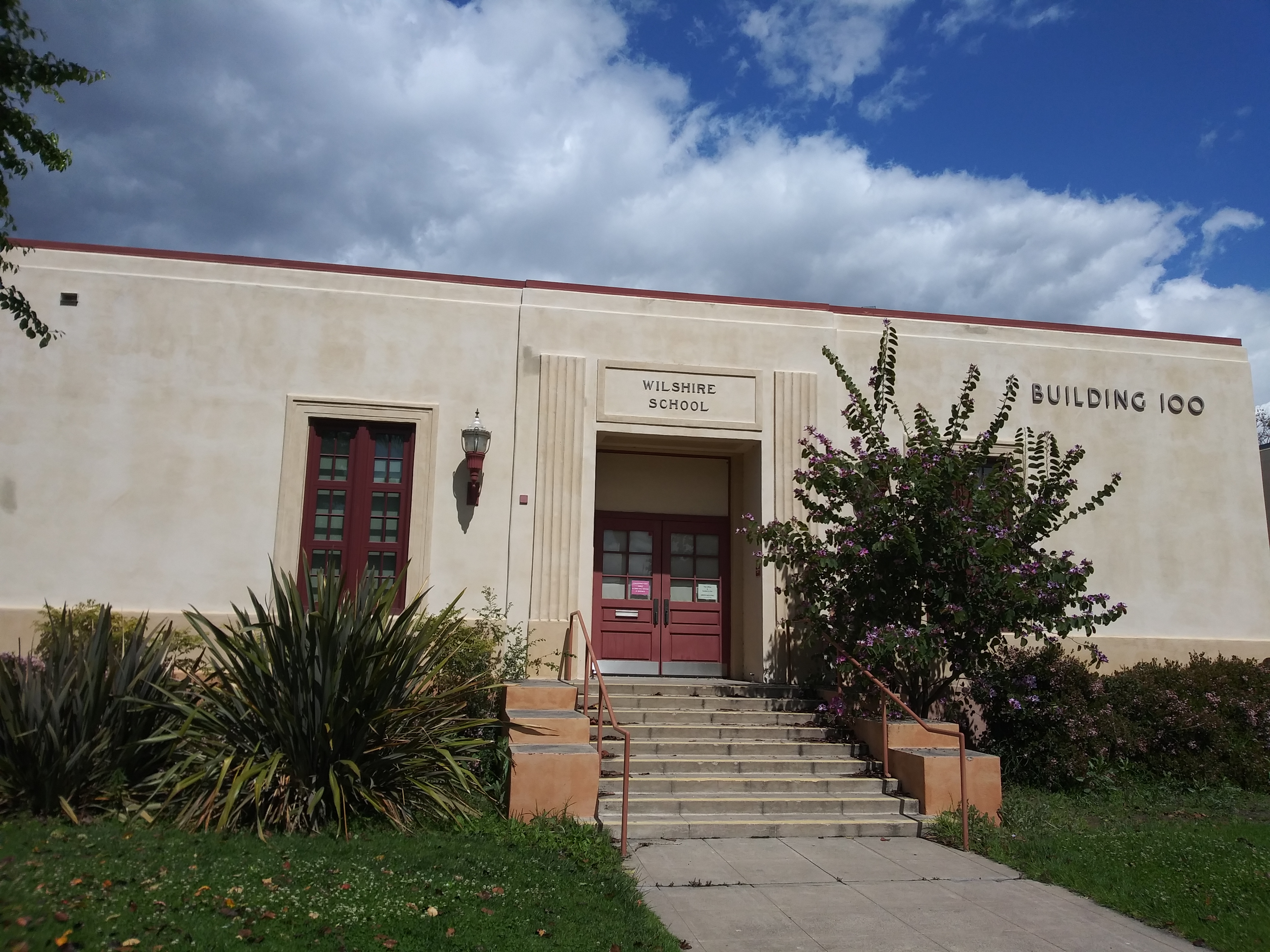 “Pastoral California” mural on Plummer Auditorium (201 E Chapman Ave): Giant fresco painted by Charles Kassler under the Public Works of Art Project in 1934. Spanning 75 feet by 15 feet, the mural is unmatched in size and scope. One of the two largest frescoes commissioned during the New Deal. 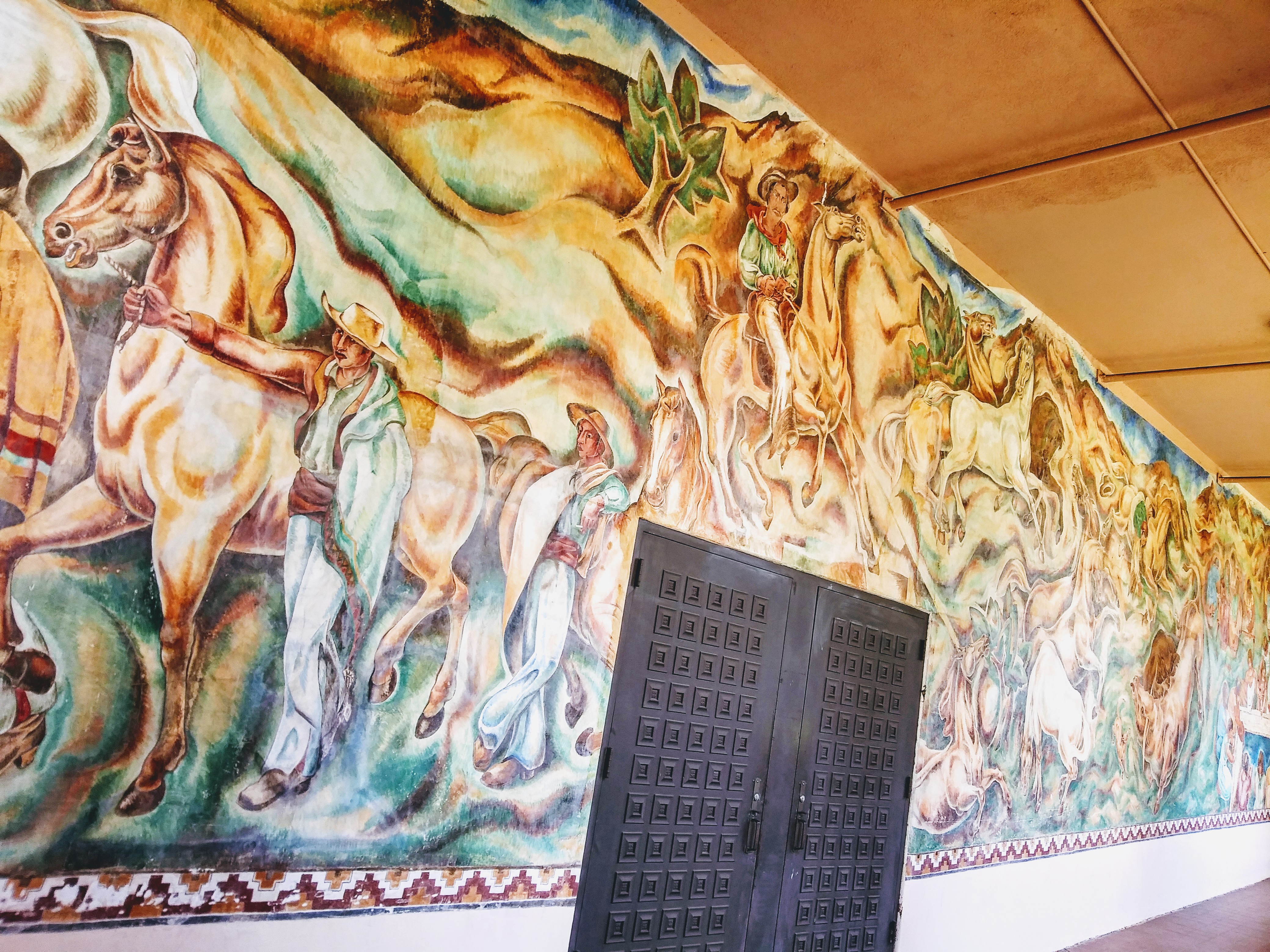 Fullerton College (321 E Chapman Ave): In 1935, Fullerton architect Harry K. Vaughn teamed up with landscape architect Ralph D. Cornell to create a general plan for the new campus, to be partially funded by the WPA and the PWA.  The first building was the Commerce Building, next was the Administration and Social Sciences building, then the Technical Trades building. 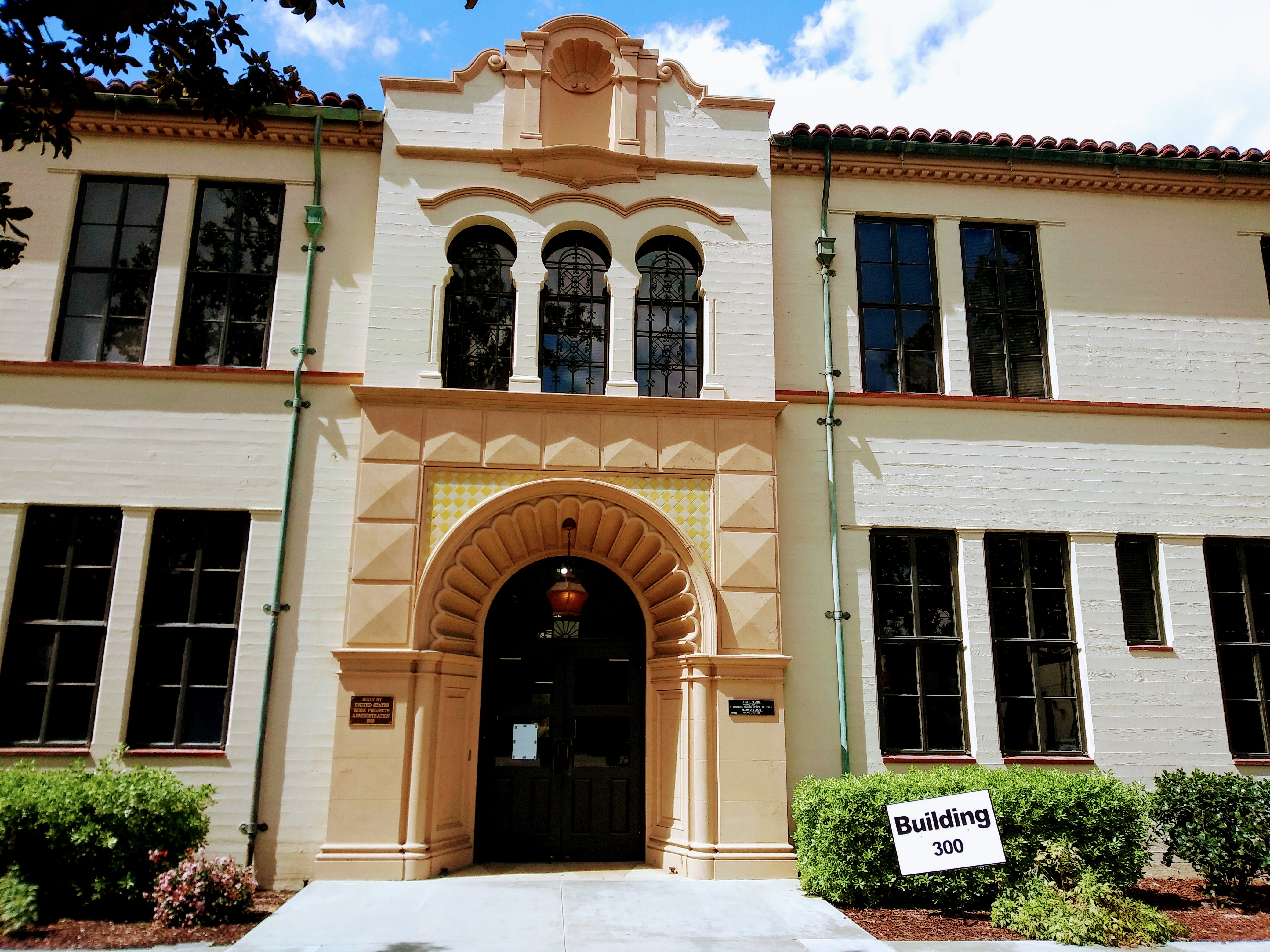 Fullerton Museum Center (301 N Pomona Ave): Fullerton’s first public library was an Andrew Carnegie-funded library built in 1907. Years of wear (and the 1933 earthquake) necessitated a re-building. In 1941, the Carnegie Library was demolished, and a new library was re-built by WPA workers. The building was dedicated in 1942. A new library (on Commonwealth) was built in 1973, and the Fullerton Museum Center has occupied the building since 1974. 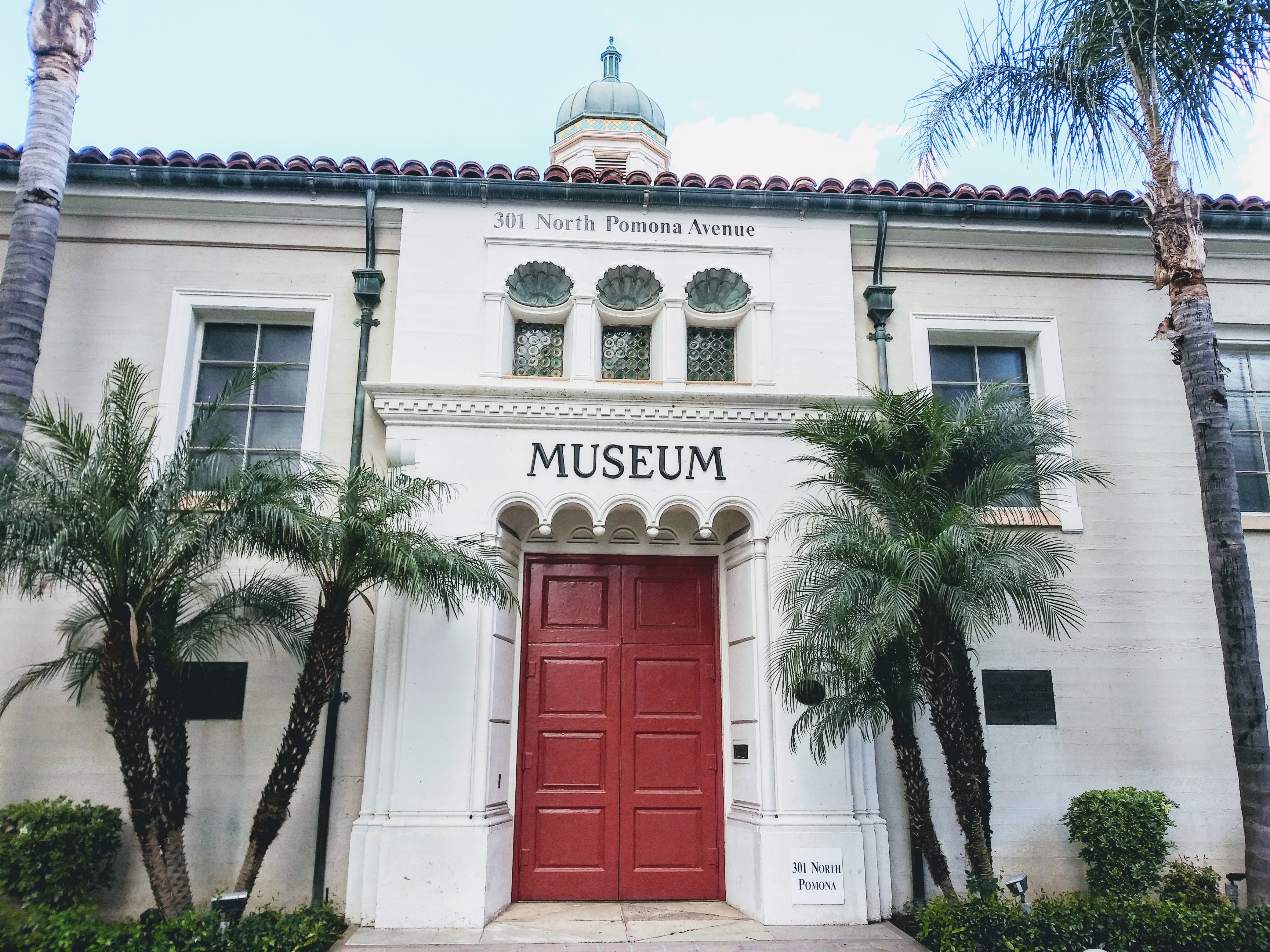 Post Office (202 E Commonwealth Ave): The first federally-owned building in Fullerton, it was built in 1939 and funded by the Department of the Treasury, and built by crews of local workers. This post office also contains the mural “Orange Pickers” by Paul Julian, funded by the Treasury Department Section of Fine Arts. Paul Julian went on to have a very successful career at the Warner Bros. studios animating Looney Tunes shorts. 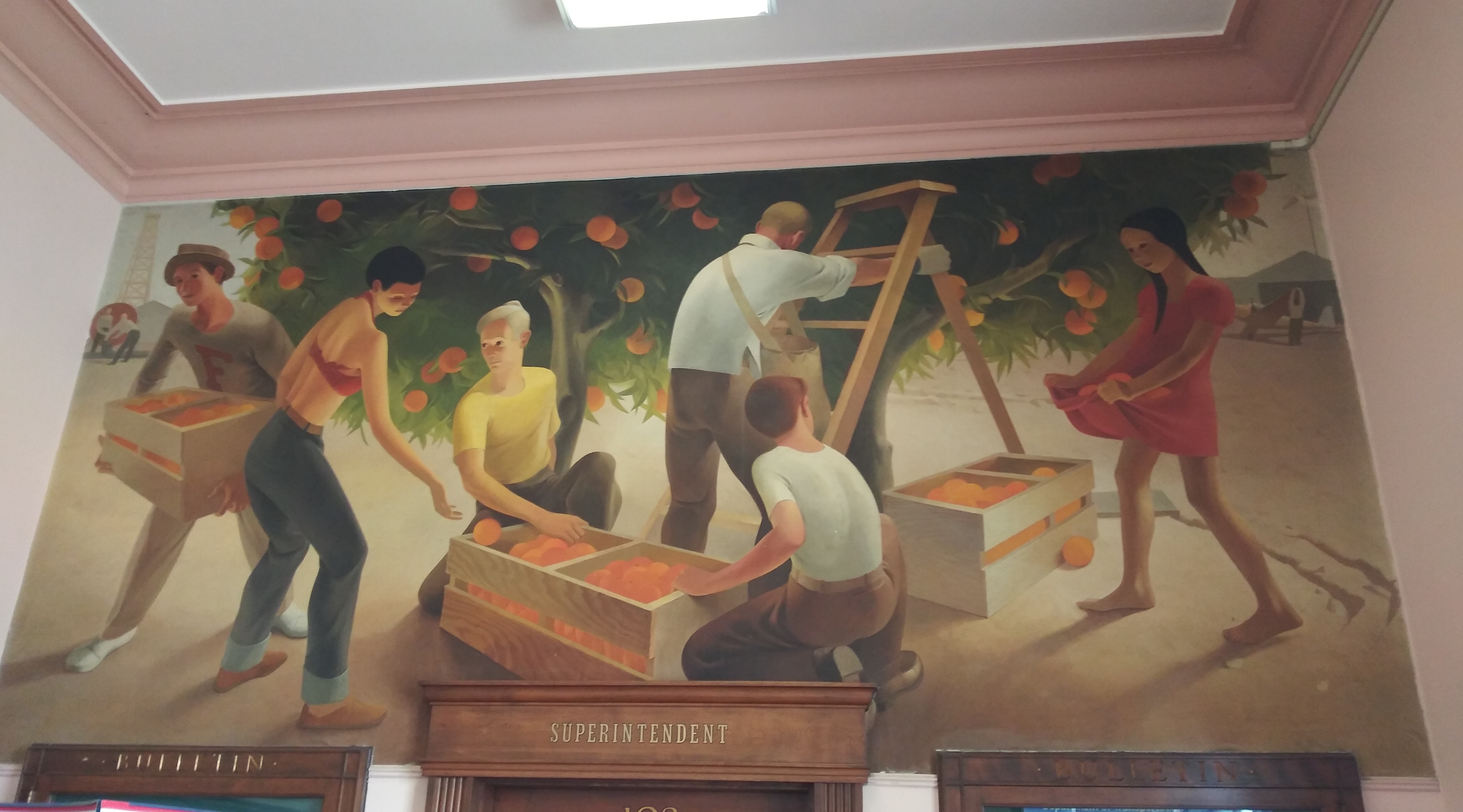 Police Station/Former City Hall (237 W Commonwealth Ave): The impressive Spanish Colonial Revival building is now home to Fullerton’s police department. Designed by architect George Stanley Wilson, the building was completed in 1942. One of the most distinctive features of the building is its extensive tile work. 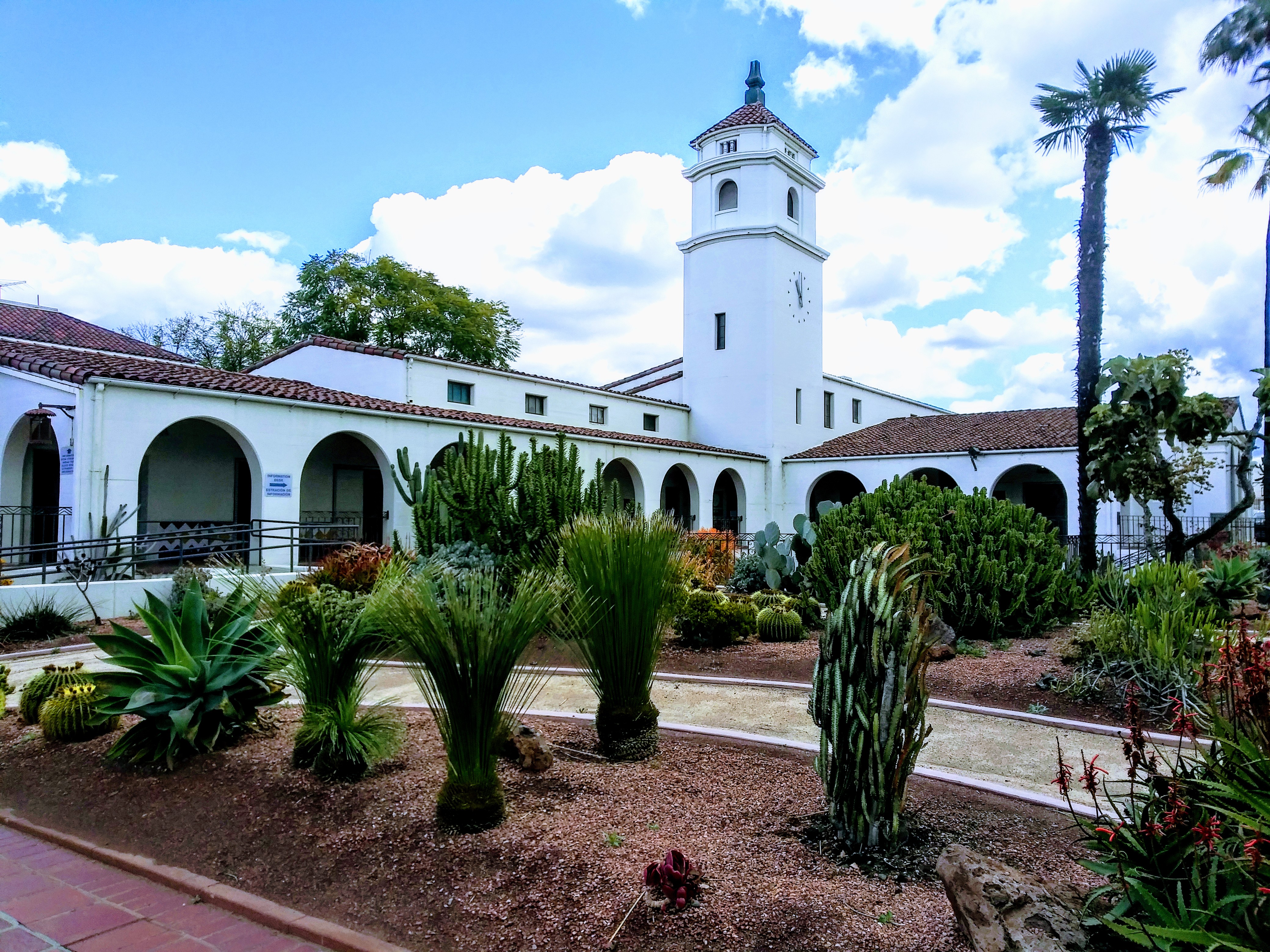 “The History of Southern California” Mural in the Police Station: A three-part mural for which the WPA’s Federal Art Project commissioned artist Helen Lundeberg to paint in 1941. The mural depicts everything from the landing of Juan Rodriguez Cabrillo in San Diego in 1542 to the birth of the aircraft and movie industries in Los Angeles in roughly chronological order.

Hillcrest Park (1200 N Harbor Blvd):  The amount of work done in Hillcrest Park during the New Deal was staggering, with projects being funded and constructed by the CWA, WPA, RFC, and SERA. Much of Hillcrest Park’s landscaping was done during this era, like the excavation of the “Big Bowl.” Perhaps the most iconic feature of Hillcrest Park is the Depression-era stonework that runs throughout the Park. Today, Hillcrest Park represents the finest example of a WPA-era park in Orange County and has enjoyed federal recognition since 2004, so the structures are safe. 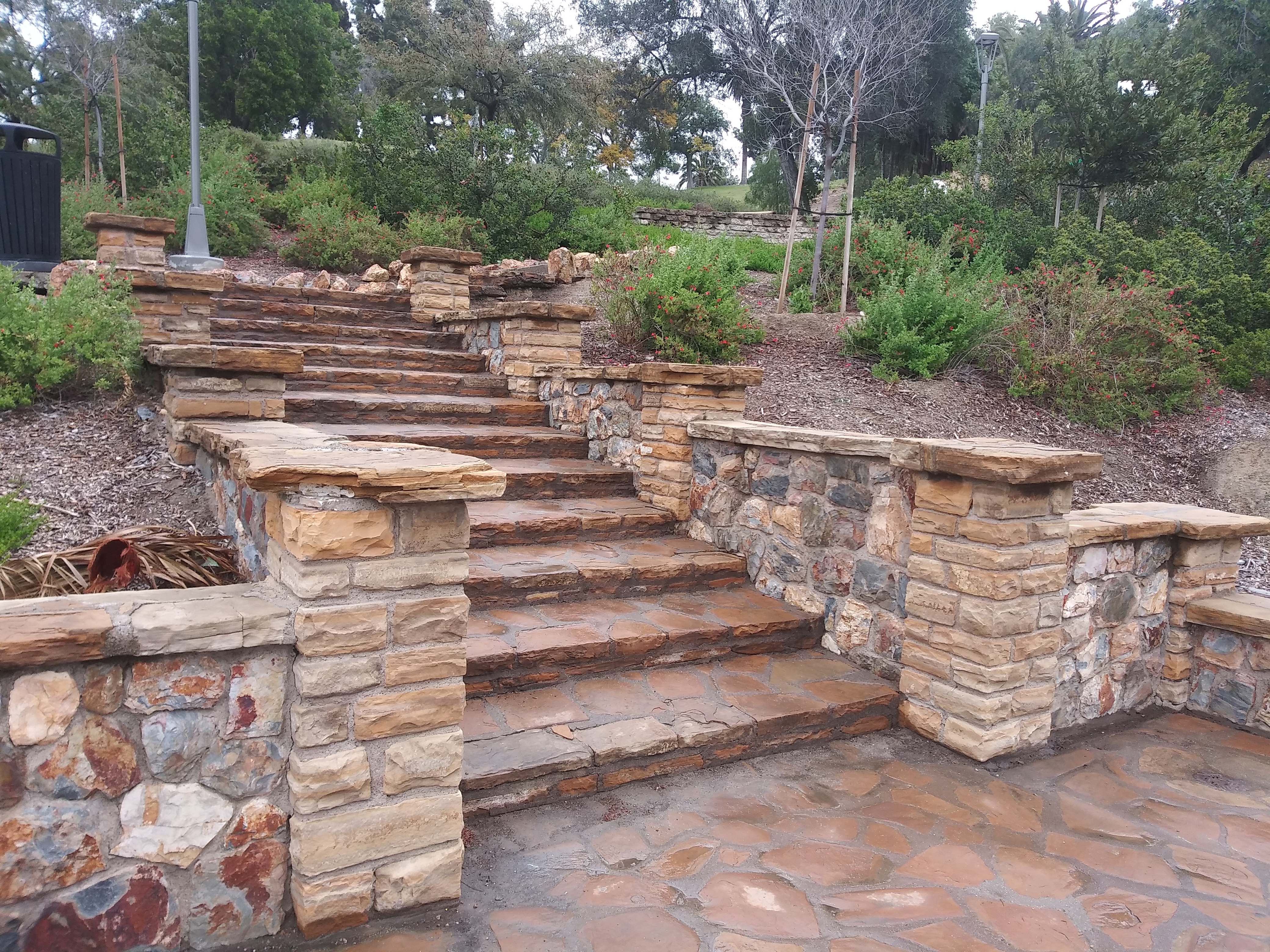 Amerige Park (300 W Commonwealth Ave): A wooden grandstand and stone pilasters were built at the baseball field in 1934. The grandstand was destroyed by a fire in the 1980s, but the flagstone pilasters remain.