Fullerton City Council was divided about the merits of allowing short-term rentals, such as AirBnb, in the City. After much discussion and input from the public at the September 15 meeting, council decided to postpone voting on a proposed ordinance that would allow a limited number of short-term rentals (STRs) in the City with regulations.

Fullerton currently has no ordinance specifically regulating STRs, although there were 305 STR properties operating in the City in June of this year. One purpose of the proposed ordinance would be to enable the City to collect taxes and fees on STRs, and to create a code enforcement mechanism to address bad actors. 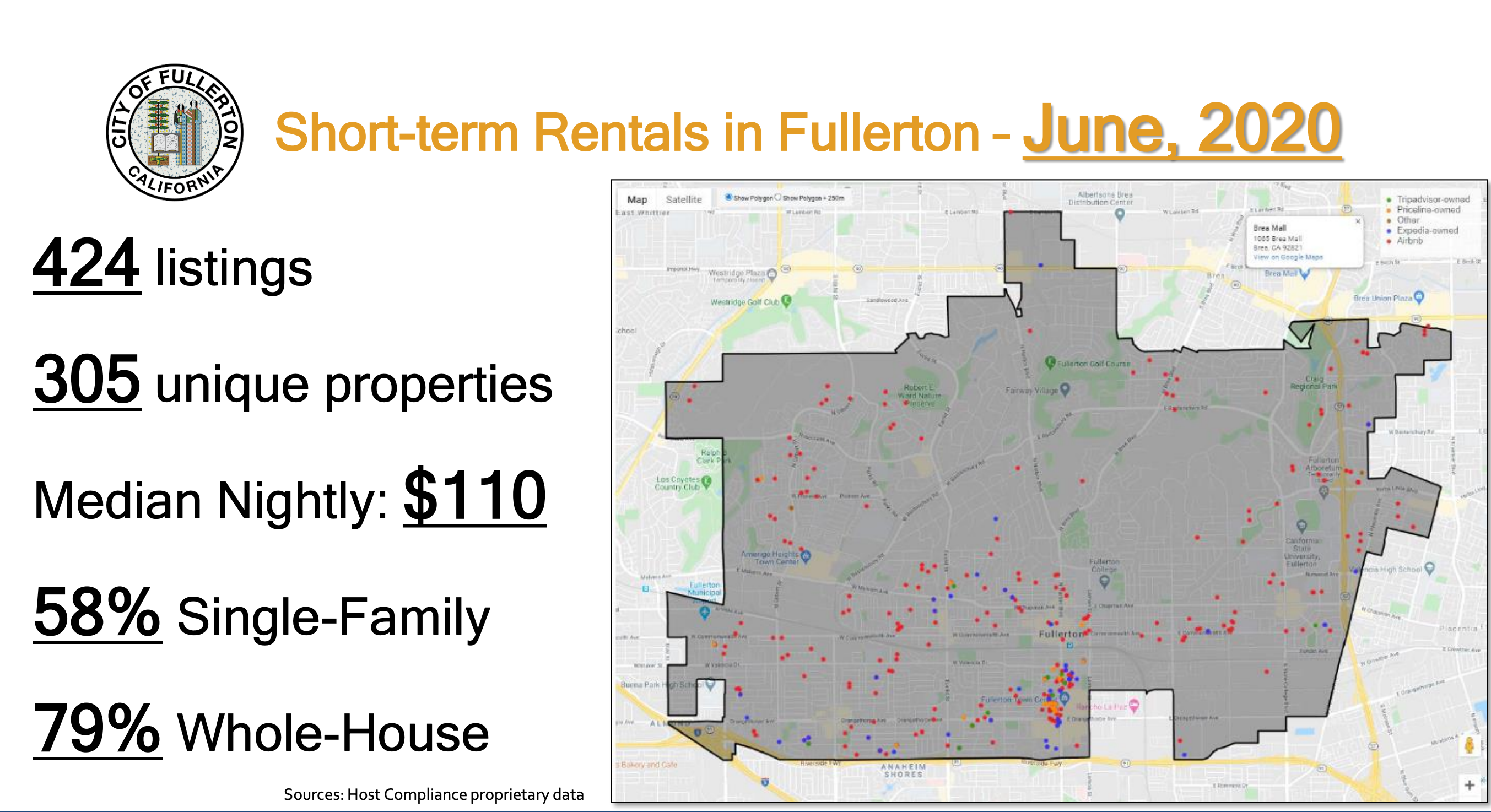 The proposed ordinance would cap the number of “whole house” rentals at 500, reflecting concern that removing large numbers of homes from the regular housing market would exacerbate an already-existing housing crisis.

A staff report highlighted some of the pros and cons of allowing STRs in cities: “While the growth in short-term rentals has further diversified lodging options and created a revenue opportunity for residents looking to rent extra rooms, this use has been known to result in negative impacts, particularly in single family residential neighborhoods…The most common nuisance activities related to short-term rentals are noise, property maintenance, and parking,” according to the report.

Nearby cities such as Anaheim and Garden Grove have voted to prohibit short-term rentals, largely due to concerns mentioned above.

The Public Weighs In

Some members of the public who live or have lived near STR properties shared their negative experiences of loud parties with large gatherings, and a general disregard for neighbors, and urged council not to allow them.

“It has been a nightmare,” Michelle Davenport, a Fullerton resident who lives near an STR, said.  “The first night they came in with 40+ people. Nobody was wearing a mask, it was loud, there were fights. We are constantly calling the police…It’s a party atmosphere.”

Others said that allowing STRs would remove homes from the regular housing market, exacerbating the current housing crisis.

“Stand up for homes and not for tourist rentals,” a representative of the Los Angeles Alliance for a New Economy said. “When there’s a regional housing crisis going on, we need to protect every home that we can.”

“We represent hundreds of workers who live in Fullerton. A lot of our members are the folks who are doubled and tripled up in small apartments. They’re affected by these STRs,” Lynch said. “No percentage of STRs makes sense when you’re struggling to deal with homelessness in a place where there’s an extreme housing crisis…It makes no sense for the council to, on the one hand, take measures to fight homelessness and on the other, do something that absolutely will put more people on the street.”

Teresa Silva, a Fullerton resident and local hotel worker who was laid off due to COVID-19, spoke against STRs.

“This will affect me in two ways: people will not go to hotels, and I will not be able to work as many hours as I used to work. How am I going to afford meals and rent?” Silva asked.

“Our hotel workers are struggling to make ends meet,” an organizer with Unite Here said. “Shelter is a basic need. It’s immoral to collect a small tax revenue rather than providing affordable housing, places where they can live, for your people, for your constituents.”

Some owners of STR properties spoke in favor of allowing them, and even potentially expanding the allowable number of whole house STRs.

“I live next to my rental. It’s important for me to have a good property not only for myself but also for my neighbors,” one STR host said. “We provide a service people need. It’s not just housing—it’s a service.”

Jimmy Hong, an Air BnB host, said, “We’re proud because we have taken almost uninhabitable, broken-down homes and renovated them—put in our time, effort, and resources to make it the best property in our neighborhood, and our neighbors have complimented us for that…We are very considerate of our neighbors.”

Ken Bane, an Air BnB host in Fullerton who spoke in favor of allowing STRs, said that council should reject “the undue influence of union lobbyists who represent only a fraction of the City’s workforce and obviously have their own economic interests in mind.” Bane said that “the handful of complaints received, while unfortunate, are statistically insignificant…and are the exception rather than the rule…Be reasonable. Don’t impose restrictions on us that you wouldn’t otherwise impose on the hotels.”

Jose T. Castaneda read the names of many individuals who submitted e-comments in opposition to allowing STRs.

Mayor Jennifer Fitzgerald said, “I support short-term rentals and I’d love to pass this without any cap and simply with a “Good Neighbor” policy and having to get a business permit.”

Council Member Jesus Silva, by contrast, made a motion to ban all STRs, citing high rents caused by the current housing shortage, and the impact this would have on local hotel workers.

Council Member Bruce Whitaker said that banning STRs, especially when there are around 300 currently operating within the City, could result in “all sorts of litigation.”

Whitaker made a motion to increase the allowable number of whole house STRs to 700.

Mayor Pro Tem Flory made a different motion to stick with the original proposed ordinance, which allows 500 units.

Silva made a motion to “continue” the item to a future meeting.

Mayor Fitzgerald, growing upset over the lack of consensus and number of motions, said sarcastically, “Let’s take a vote on continuing it because this council loves to just kick that can down the road again and again and again, and go through numerous public hearings on the same thing for years, so let’s keep that going.”

Council voted 3-2 (Fitzgerald and Flory “no”) to continue the item “to a date uncertain.”