Surrounded by attendees, Assemblywoman Sharon Quirk-Silva stood in front of Fullerton City Hall for a Stop Asian Hate press conference, which took place on March 20 at 3pm. Quirk-Silva was joined by Orange County elected officials, community leaders, and advocates to address the hate crimes that have taken place against the Asian Pacific Islander (API) community. 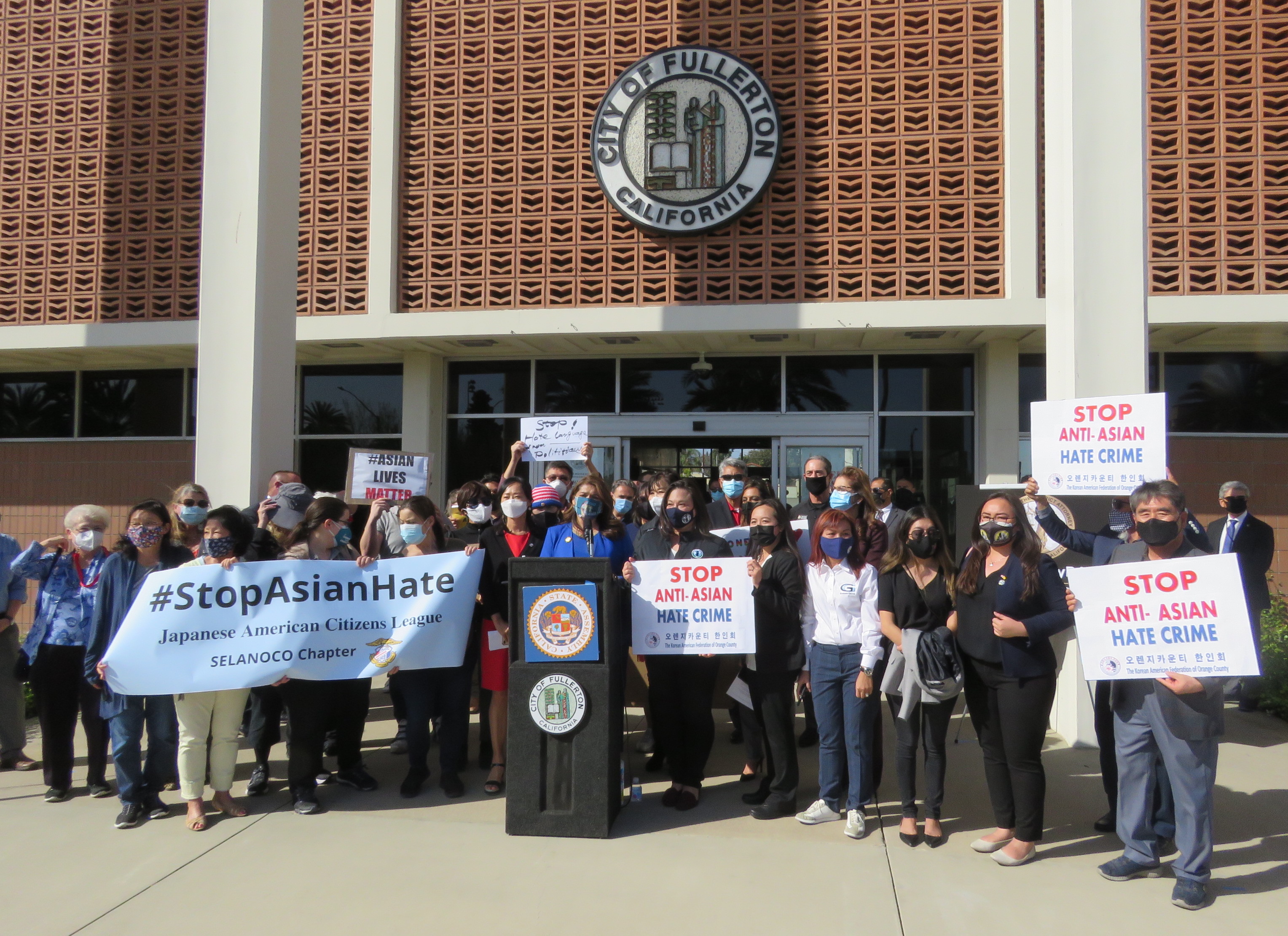 Hate incidents and hate crimes targeting Asian Americans across the nation have increased, the most recent being the 8 lives that were taken in Atlanta, Georgia. On March 16, Robert Aaron Long targeted three spas in the Atlanta area killing eight people, six of whom were Asian women. Their names were Soon Chung Park, Hyun Jung Grant, Suncha Kim, Yong Yue, Delaina Ashley Yaun, Paul Andre Michels, Xiaojie Tan, and Daoyou Feng. Crime reports said that this was not a racially-motivated attack and instead attributed his behavior to the shooter having a “bad day” and sex addiction. This interpretation of the tragedy outraged many allies of and those within the API community who have called for this rampage to be acknowledged as a hate crime.

According to analysis by the Center for the Study of Hate and Extremism, Anti-Asian hate crimes have increased by nearly 150% in 2020.

“For Asian Americans, it is a time of incredible uncertainty and fear. We’re being attacked in our homes, on the streets, in our businesses,” Senator Dave Min said. “We’re being accosted, screamed at, spit upon, physically assaulted, and yes, murdered.”

Senator Min began his statement calling out the harmful rhetoric used towards Asian Americans by the previous presidential administration linking China to the coronavirus. Senator Min also spoke about resolution 12, which condemns anti-Asian hate crimes and was passed unanimously on the Senate floor. Two other bills are also being co-authored, one of which will call for hate crime training to be developed and implemented in police departments around the State. The other would create a special domestic terrorism unit within the California Department of Justice focused on hate crimes. Alongside these resolutions, the California state legislature approved assembly bill 85, which would allocate $1.4 million to fund research and reporting specifically for API hate incidents and crimes.

Orange County District Attorney Todd Spitzer shared in his statement that education is a fundamental way to move this country past the lack of understanding of one another. Spitzer condemned the violent action towards elderly people and made clear that he would fight to prosecute those who participate in these attacks. 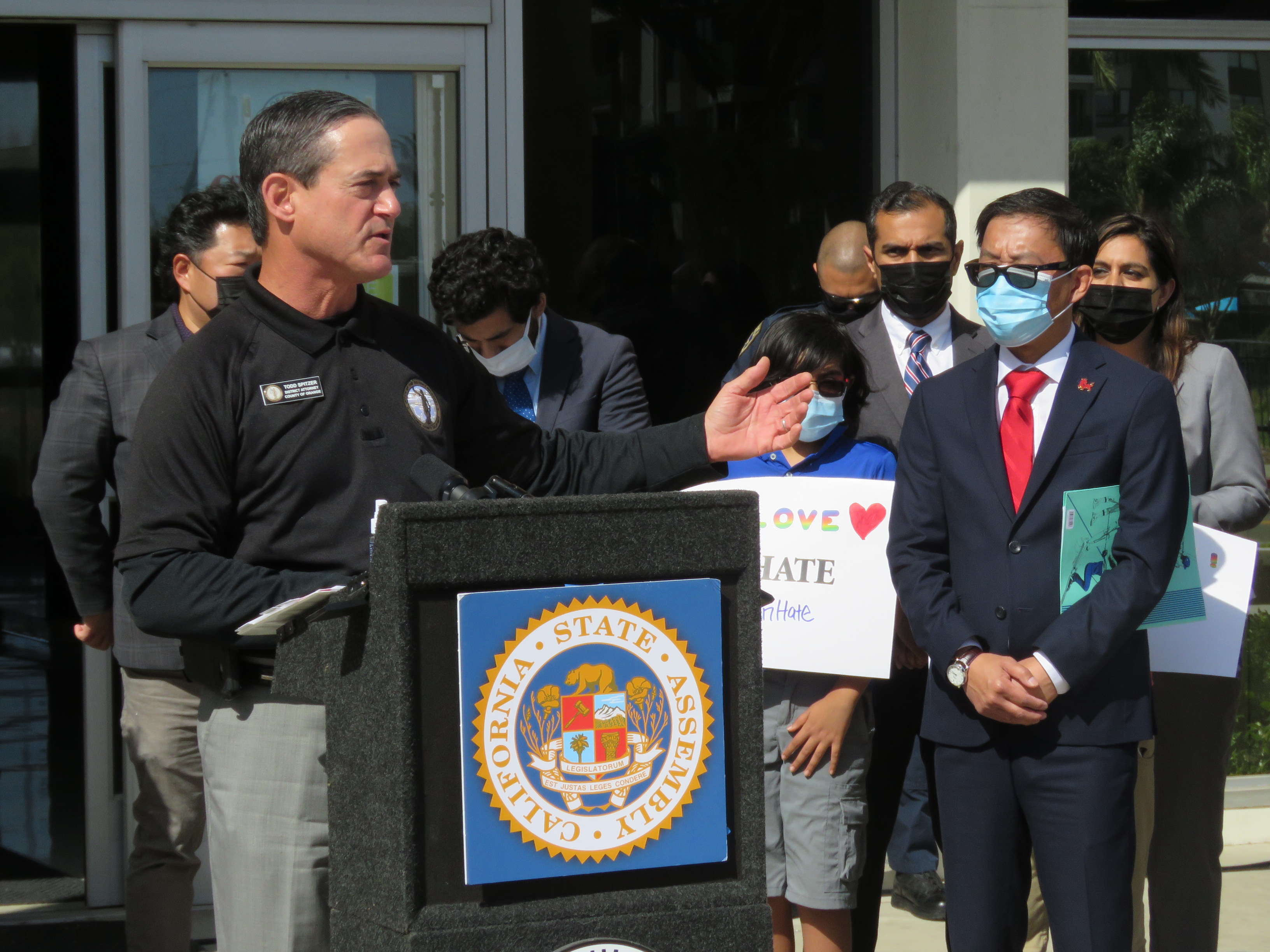 “There has to be a component where people know there are consequences. You cannot knock elderly people down on the street from behind and steal their property and get away with it,” Spitzer said. “You cannot attack individuals because of the color of their skin or the way they look in Orange County without understanding that you will be prosecuted. It is going to stop by us coming together and it’s going to stop when we love each other and understand that the reason we have such a beautiful community is because of our diversity.”

When asked what practical things can be done to address this issue, Councilman Fred Jung also turned to education as a solution.

“When you have inclusive ethnic education that tells the full history of this country and doesn’t mask certain things, there’s an appreciation that develops amongst children who recognize they’re not different from one another,” Councilman Jung said. “A lot of that starts at the youth level that we can do. People who are young have no concept of race, and they’re perfectly fine being in tune with one another, being teammates together, [being] classmates together, and I think if we can start at the education level, get that done, the problems would never come to City Council.” 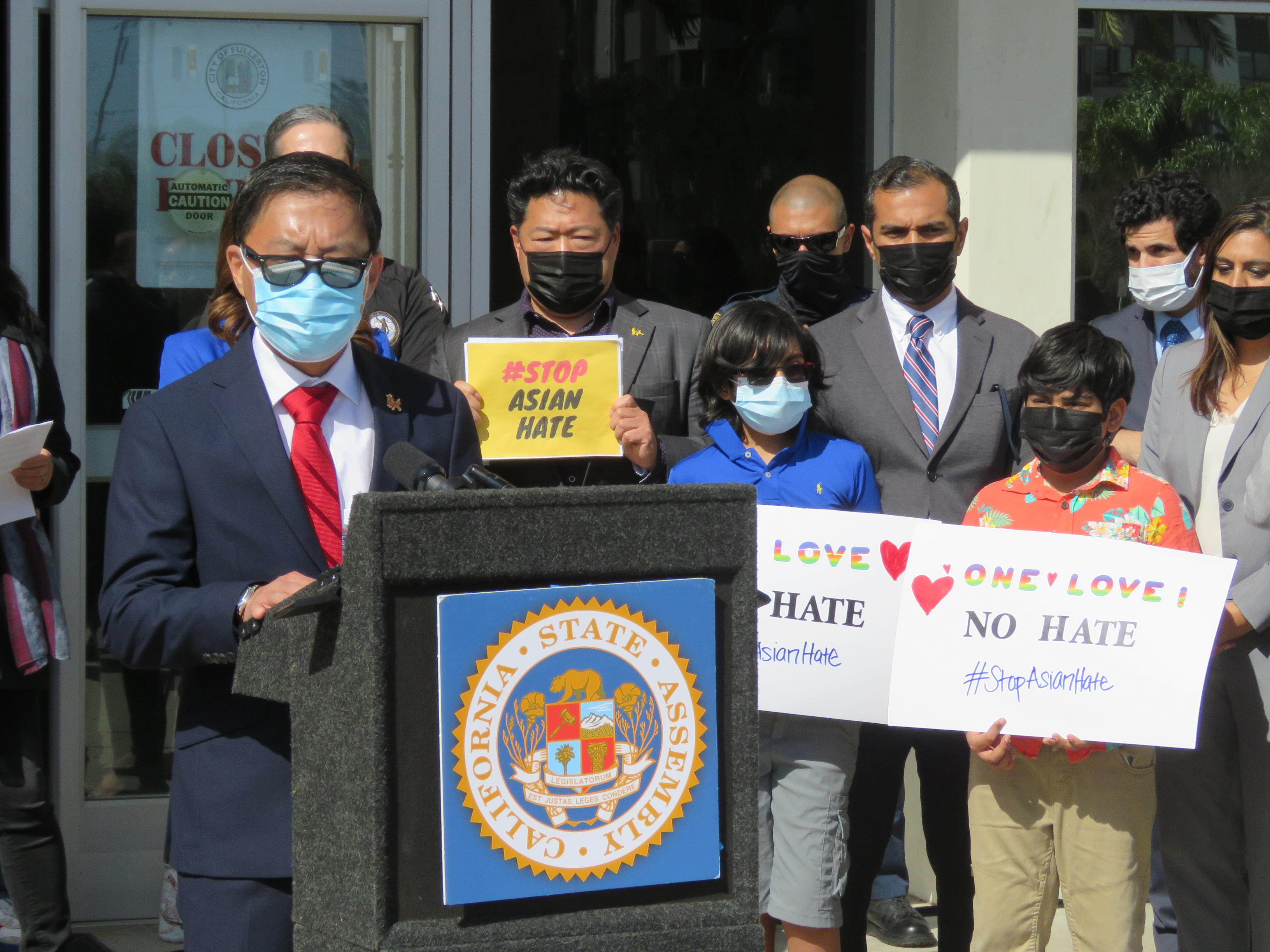 This idea of education that both Councilman Jung and District Attorney Spitzer share has already made progress within the state of California as the state legislature has passed a bill requiring all California State University students to take an ethnic studies course in order to graduate. The bill was signed into law in August 2020.

“I stand here today as an Asian American woman and as a Korean American woman who is angry. I am angry at what is happening and what the media is doing to portray our women by fetishizing our women and making us look like we did something wrong. We did nothing wrong. This is nothing short of a hate crime,” Vice Mayor of Irvine Tammy Kim said.

Vice Mayor Kim spoke with passion and vigor to clearly express how these tragedies have made her feel. She called for solidarity as a way to support Asian Americans and Asian American women. 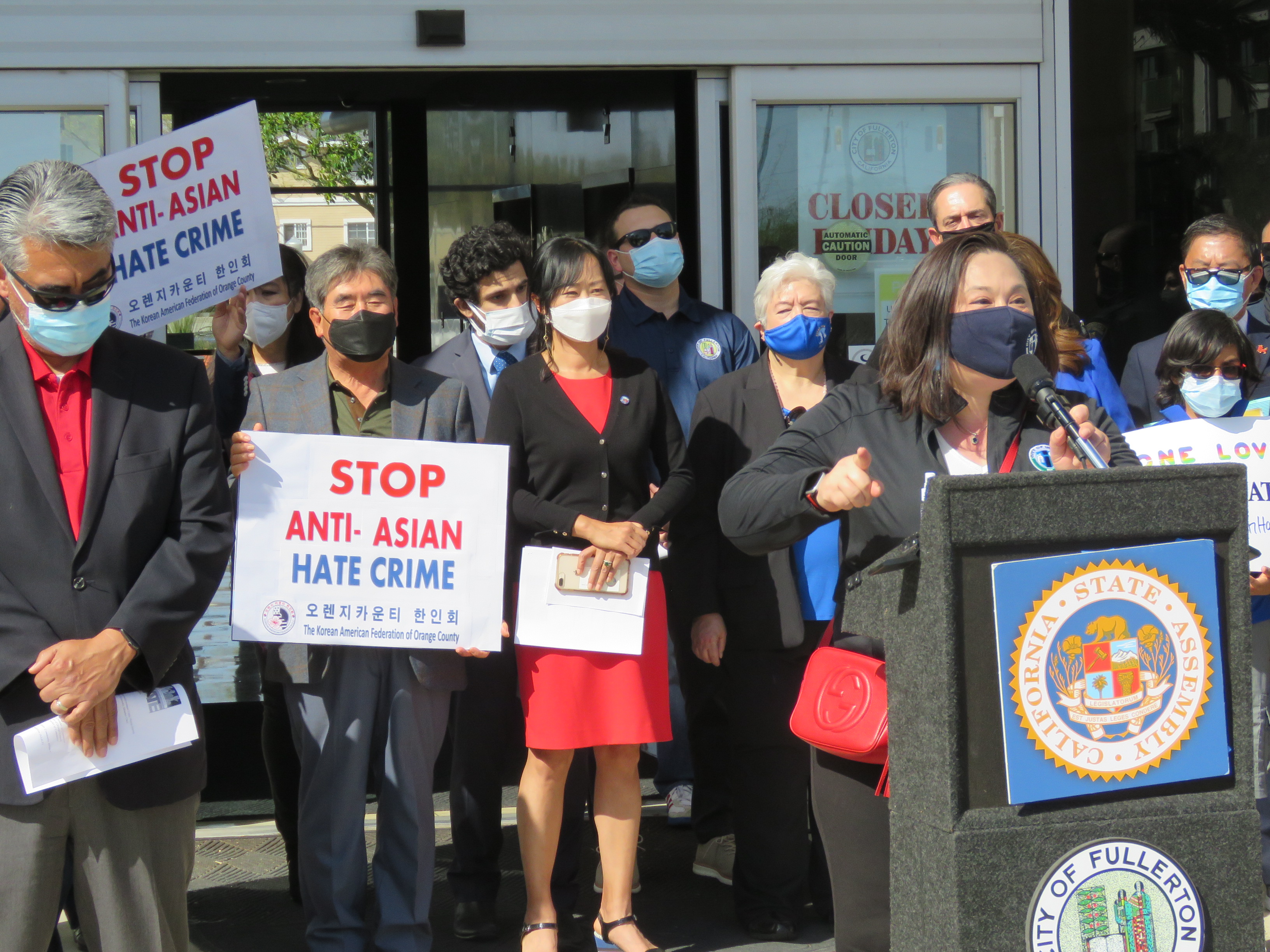 Irvine Vice Mayor Tammy Kim spoke with anger and passion about the rise in hate crimes and incidents against Asian Americans.

Mayor Pro Tem of Buena Park Sunny Park shared how Buena Park has been addressing these issues within the API community.

“Last year with unanimous consent of my City Council colleague, we formed a human relations committee consisting of seven members and started to work with the community. We recognize Asians are not vocal. We are taught to be respectful to the authorities and nonconfrontational,” Mayor Park said. “For that reason, hate incidents and hate crimes against Asian Americans go unreported. So, we’ve been working with the Asian community to raise our voices and report if necessary. With the police department we ask police officers specifically to report hate crimes as hate crimes because when you think about it, police officers take the very crucial role to recognize the racial undertone of these incidents.” 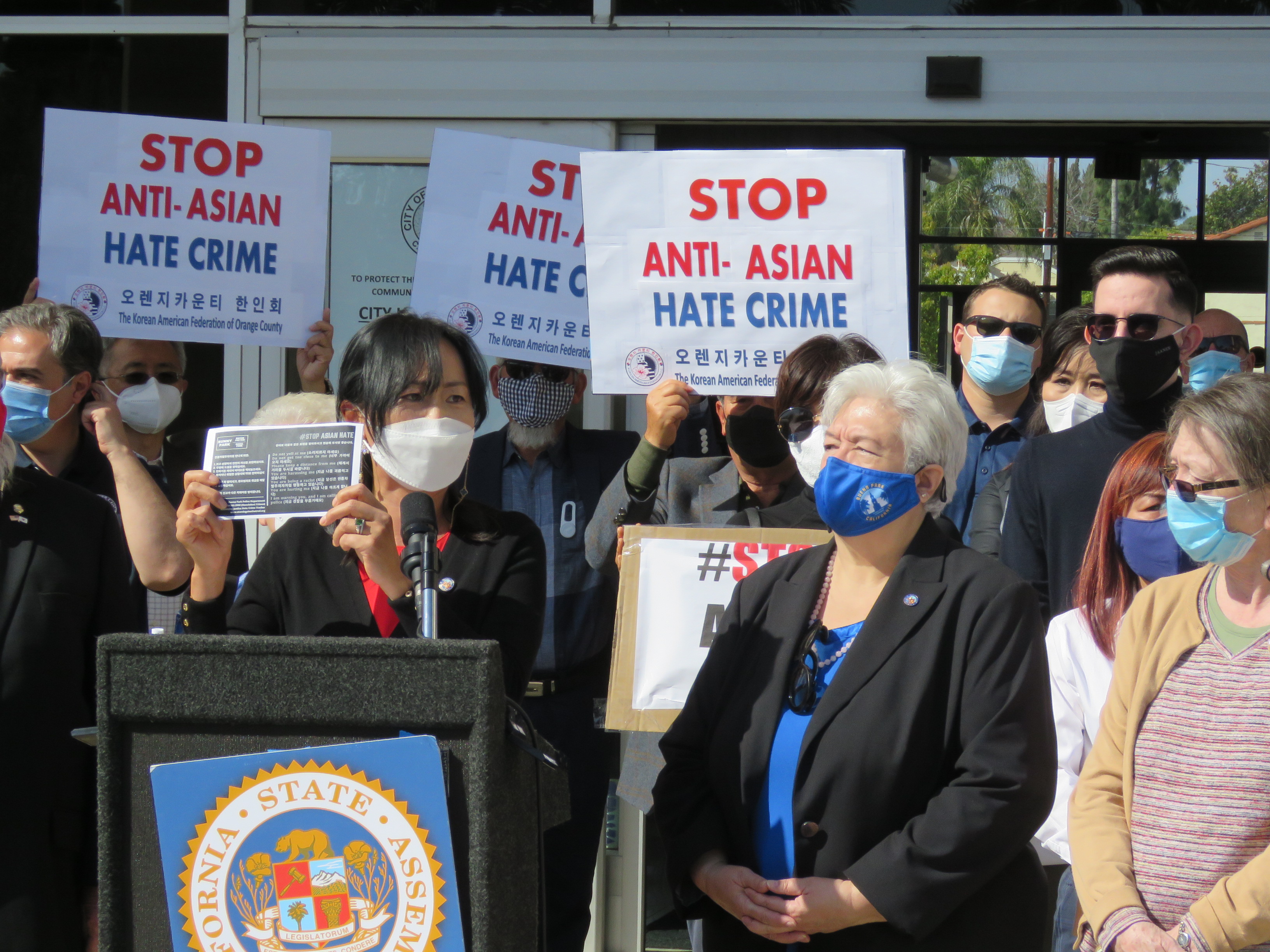 To share this sentiment, Councilwoman of Cypress Dr. Frances Marquez, called on government officials at every level to implement cultural awareness training in city administrations, police departments, and schools. Also, being able to better track and gather data on hate crimes is a step to address this issue.

When it came his turn to speak, Fullerton Mayor Bruce Whitaker said, “Let me say that one of the things that brings about dislike of Asian Americans sometimes is their propensity to excel in academics. It is largely Asian Americans who have propelled Fullerton’s schools into national prominence with award-winning excellence. So that being the case, I think we should focus on the positives and work with each other while demanding protection for all citizens of all races.”

Asian American guests who had spoken before Whitaker decried this stereotype because it is one that has created a negative stigma that all Asians must and can only be successful in America (the “model minority” stereotype), and Whitaker’s comment contributed to upholding the stereotype.

Whitaker’s statement raised reactions from those who attended the press conference. One of those attendees was Patricia Hanzo.

“He needs to be careful with his words and educate himself,” Hanzo said. “He [has] no authority to say how Asians should be viewed. He shouldn’t perpetuate stereotypes about ‘model minorities.’”

Assemblywoman Quirk-Silva ended by calling on API women to come stand with her as she closed out the press conference.