Hendricks faced up to three years and Oliveras faced up to two years in county jail on charges of battery, resisting arrest, and obstructing and delaying an investigation stemming from an August 24, 2018 incident during a Lady Antebellum concert at the FivePoint Amphitheatre in Irvine. 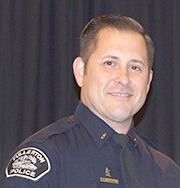 Following the incident, both were put on paid leave by the city. Hendricks retired from the Fullerton Police Department on November 2, 2018 and Oliveras retired in December.

Original charges filed by the OC District Attorney followed an investigation by the Irvine Police Department and alleged the two had assaulted paramedics who were trying to treat Hendricks’ wife, who had fallen at the concert. Among charges Hendricks was accused of pushing emergency workers and Oliveras was accused of putting one EMT in a headlock.

In the plea deals, which reduced charges to one misdemeanor charge of disturbing the peace, each agreed to pay $500 to the Victim Witness Emergency Fund.