At their March 19th meeting Fullerton City Council voted 3-2 (Fitzgerald and Whitaker “no”) to fly the rainbow flag at Fullerton City Hall beginning on Harvey Milk Day (May 22) through the month of LGBTQ Pride, which is June. This makes Fullerton the third city in Orange County to fly the pride flag, after Anaheim and Santa Ana.

This item was brought forward at the request of council member Ahmad Zahra, who is the first openly gay member of Fullerton city council.

“This is something very important to me personally, and to many in our community and throughout Orange County,” said Zahra.

Zahra talked about the struggles that the LGBTQ community has faced over the years in terms of harassment and discrimination. He cited statistics showing high suicide and homeless rates among LGBTQ youth.

“And so it is important, in my opinion, to show our community at large that we are a city that welcomes all, a city that acknowledges all communities and the issues people are struggling with,” Zahra said. 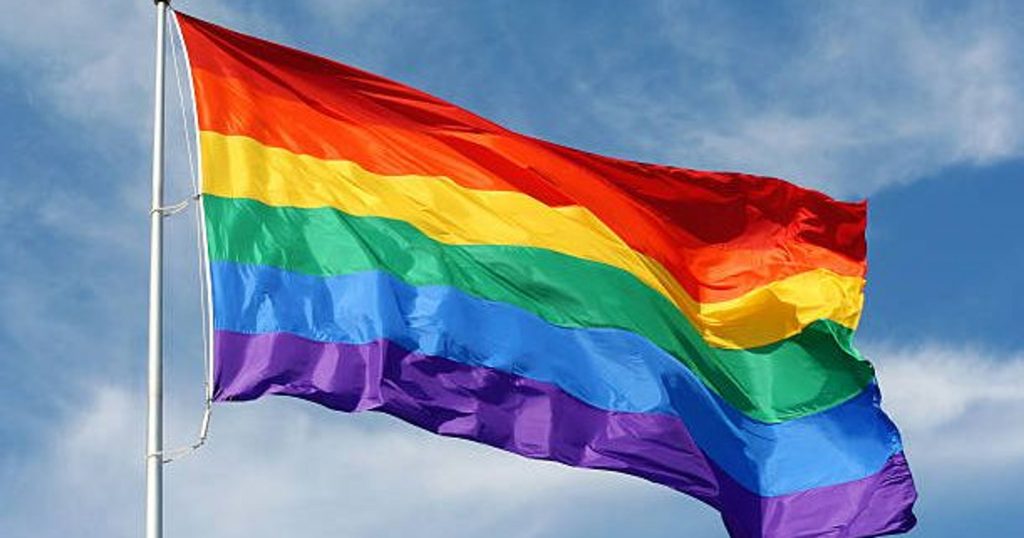 Several members of the public gave their support for this new policy.

“Every member of the LGBTQ community is someone’s son or daughter, their brother or sister, their mother, their father, or their friend,” said Eric Barlow, “As such, it is just, right, and necessary to acknowledge and celebrate their history and inclusion, their value and validity, their dignity, and their place in our community.”

“I wish that maybe ten years ago we would have had something like this because I went to Troy High School and I had a friend named Andrew who was gay and he didn’t make it to today,” said Jose Trinidad Castaneda, “When young LGBTQ people, especially queer and trans youth of color, see the pride flag in a space for the first time, they know that they’re loved.”

Castaneda recalled being harassed in Fullerton for having a pride flag on his car. He recalled the 2016 massacre of 49 LGBTQ people in Orlando, Florida.

“We’re still seeing the impacts of abuse, oppression, and threats against our safety today. So whether you believe this to be symbolic action, just know that for someone like me, it’s not symbolic at all, it’s very powerful,” Castaneda said.

One public commenter pointed out that Fullerton has not always been a bastian of acceptance of LGBTQ people. In fact, in 1978 it was State Senator John Briggs of Fullerton who sponsored Proposition 6, which would have allowed public schools to fire teachers for being gay.

It was Harvey Milk, San Francisco’s first openly gay member of the Board of Supervisors, who led the campaign in California against Prop 6, which ultimately did not pass. Tragically, the same year that Prop 6 failed, Harvey Milk was assassinated. 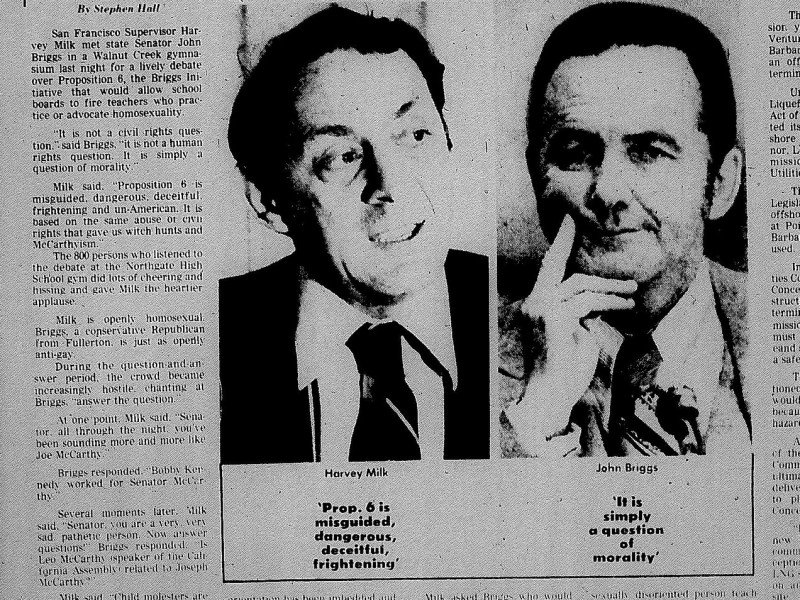 Harvey Milk (left) and John Briggs of Fullerton (right) clashed over Prop 6 in 1978.

Laura Cantor, the director of policy, advocacy, and youth services at LGBT Center in Santa Ana gave some data from a Chapman University study showing “overwhelming disparities across the entire spectrum of health-related indicators for over 15,000 LGBT-identified students in Orange County—including negative impacts on attendance, safety, bullying, alcohol and drug use, mental health, and also protective factors such as school engagement and feeling connected to school.”

“It should alarm us all, for example, that 45.8-49.2% of these LGBT students from this study in Orange County compared to 13.5% of non-LGBT youth seriously considered suicide within the last year of the study’s implementation,” said Cantor.

Cantor pointed out that the struggle for LGBTQ equality continues in the halls of school board meetings across the county, “part of an effort that is coordinated at the federal level to prevent LGBTQ youth from being recognized and supported for who they are in our schools.”

This struggle played out recently in the city of Brea, as a large contingent of parents tried to block the school board from implementing AB 329, comprehensive sex education that includes discussions of sexual orientation and gender identity, and many LGBTQ students rallied for educational inclusion. 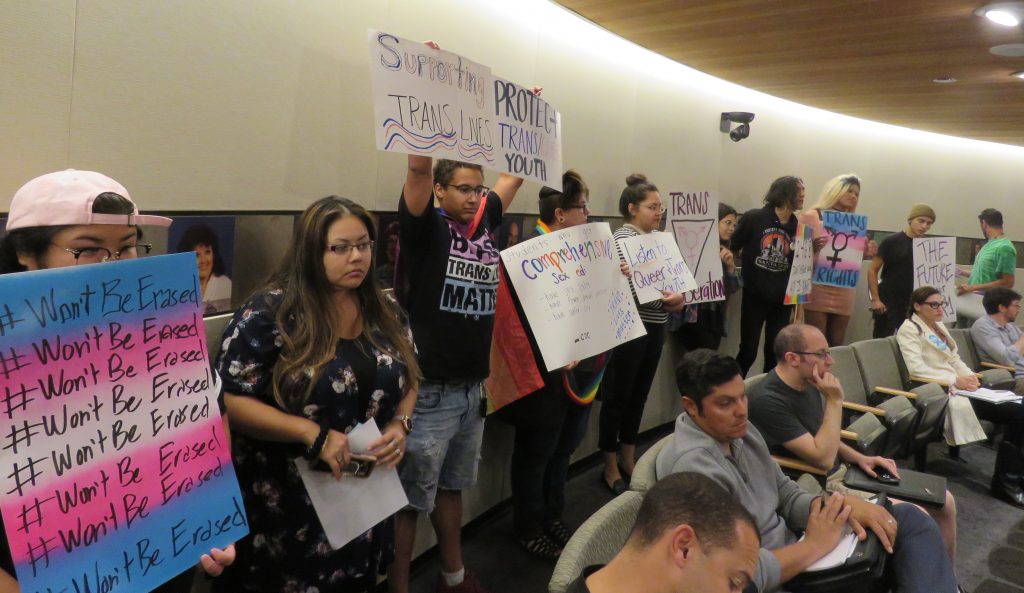 “The opportunity now is for Fullerton as a city to right the wrongs of history by raising the flag,” Cantor said, “To be honest, we need more than raising a flag, but this is a good first step to remind us that LGBTQ people are your family, your friends, your neighbors, and your council members.”

Linda May said that council members should not let fear of negative backlash prevent them from raising the flag.

“It’s because of fear of what other people think that kept me and my mother from having a decent relationship for the 30 years that I was out and never talked to her about it,” said May, “She was more worried about what other people thought than what I thought and how I felt. You need to tell them that gay is okay in Fullerton.”

She cited a California Heathy Kids Survey, which showed the LGBTQ youth are more likely to have sexual jokes, comments, or gestures directed at them while at school than their non-LGBTQ peers.

“Until we affirm LGBTQ youth and denounce their exclusion from our systems and institutions, including our government, we cannot end abuse and harassment,” said Hughes.

Debbie Langenbacher of the Unitarian Universalist church in Fullerton spoke in favor of flying the rainbow flag.

A couple members of the public, and council member Bruce Whitaker, raised concerns that if the council decides to fly the “Pride” flag, perhaps other, less desirable, groups will also seek to have their flags flown, and sue the city if they refuse.

City Attorney Richard Jones laid those fears to rest by pointing out that the city ordinance for flying flags is narrowly crafted and is limited to official city actions, not third party requests.

“As it’s crafted, we believe it gives us as much protection as the city can possibly ask for regarding potential third party requests,” said Jones.

Mayor Silva clarified, “So if another group comes before us, without getting into any litigation we could say yes or no and that would be the end of that?”

According to the city staff report, The Government Speech Doctrine, defined by the United States Supreme Court, establishes that a government organization, such as the City of Fullerton, may advance its own expression without requiring viewpoint neutrality when the government itself is the  speaker, so long as its expression does not show religious preference or encourage a certain vote in an election.

Council Member Whitaker, who voted against the resolution, said “This is a form of government expression, and what’s really troublesome to me is the fact that some of these symbolic issues are used as a weapon…that generates the kind of polarization that we’re seeing so much today from among different groups. I think it can actually antagonize and create disunity to some extent.”

“I really do support and appreciate equal rights among all people, and I believe we’re there at this stage. Now, there are still issues to be worked out over time. But we’re talking about a protected class here as well, something beyond equal rights,” said Whitaker, who suggested instead that council issue a proclamation of support for Pride Month, and not fly the Pride flag.

Mayor Protem Fitzgerald, who also voted against the resolution, said “I agree with you that any discrimination, any intolerance, any bullying, all of the struggles that many of you related are intolerable and I agree that we need as a community to acknowledge this as a safe place for everyone,” yet she did not believe in flying non-governmental commemorative flags at City Hall.

Fitzgerald supported Whitaker’s proposal to issue a proclamation, instead of flying the flag.

Ultimately, council voted 3-2 (Zahra, Silva, Flory “yes”) and (Whitaker, Fitzgerald “no) to fly the Pride flag. It’s interesting to note that, although city council elections and politics are supposed to be non-partisan, the vote on this issue was split clearly down national partisan lines–with the Republican members of council voting against flying the flag, and Democrat members voting for it.

The rainbow flag was designed in 1977 by Gilbert Baker and 30 volunteers in the attic of an LGBT center in San Francisco.

According to the Library of Congress, Lesbian, Gay, Bisexual and Transgender Pride Month (LGBT Pride Month) is currently celebrated each year in the month of June to honor the 1969 Stonewall riots in Manhattan. The Stonewall riots were a tipping point for the Gay Liberation Movement in the United States.

Today, celebrations include pride parades, picnics, parties, workshops, symposia and concerts and LGBT Pride Month events attract millions of participants around the world. Memorials are held during this month for those members of the community who have been lost to hate crimes or HIV / AIDS. The purpose of the commemorative month is to recognize the impact that lesbian, gay, bisexual and transgender individuals have had on history locally, nationally, and internationally.