Rooting for the Arboretum

I was shocked to learn there’s a possibility that Cal State Fullerton could replace some of the Fullerton Arboretum with student dormitories. With a collection of 4,000 plants from around the world, the 26- acre Fullerton Arboretum is an accredited level IV arboretum. This is one of only twenty-one in the world to be awarded a level IV accreditation for its plant collection and educational value and it’s free to the public, although there’s a suggested five dollar donation.

The Fullerton Arboretum is not only a cultural, historical and scientific landmark, but it’s also important for students, the Fullerton community, and North Orange County residents. Divided into sections, the Arboretum includes community gardens, an outdoor classroom, a nursery, a nature center, and a museum. 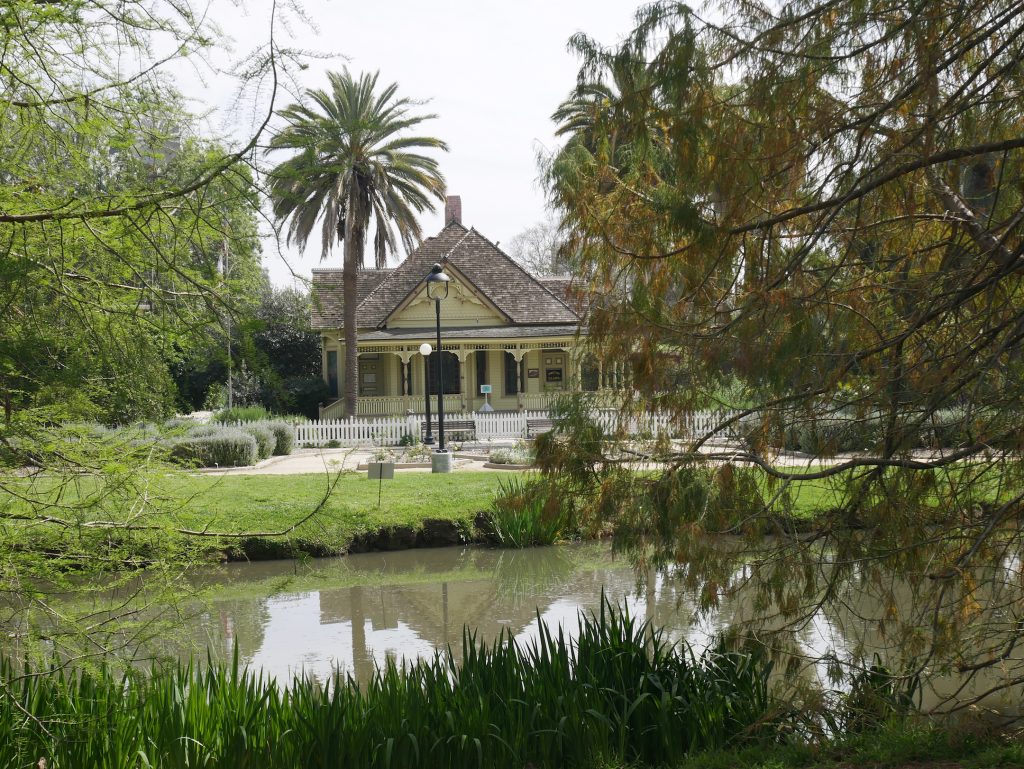 The Heritage House in the Fullerton Arboretum is on the National Register of Historic Places.

Upon entering, visitors walk across a bridge that leads across a small brook, where recycled water flows down a small waterfall on the side of a small rocky hill. In fact, the Arboretum’s ponds and streams are a man-made, recirculating system maintained as a natural freshwater ecosystem. It has been colonized by many species of plants and insects over the years.

Following the path further leads visitors to the heart of the Arboretum where the Nationally Registered Historic Landmark Heritage House, the nature center, rose gardens and children’s garden are all located. From there, visitors can either head left toward the Mediterranean collection, California Natives garden, desert and orchard, or turn right and enter the coniferous forest and woodlands area. Past the desert and the woodlands lies the subtropical garden.

The Ombu is the largest and most famous tree in the Arboretum. Little kids are able to climb around in the center of the tree. The enormous roots extend out from the base of the Ombu and provide footholds for climbers and hikers willing to reach the middle of the tree, which is split and forms a narrow path for people to go through single file. It came from the Huntington Gardens in 1979 in the backseat of a Toyota and it was only 6-feet tall at the time. Now, the tree is over 100-feet tall and towers over the grounds. 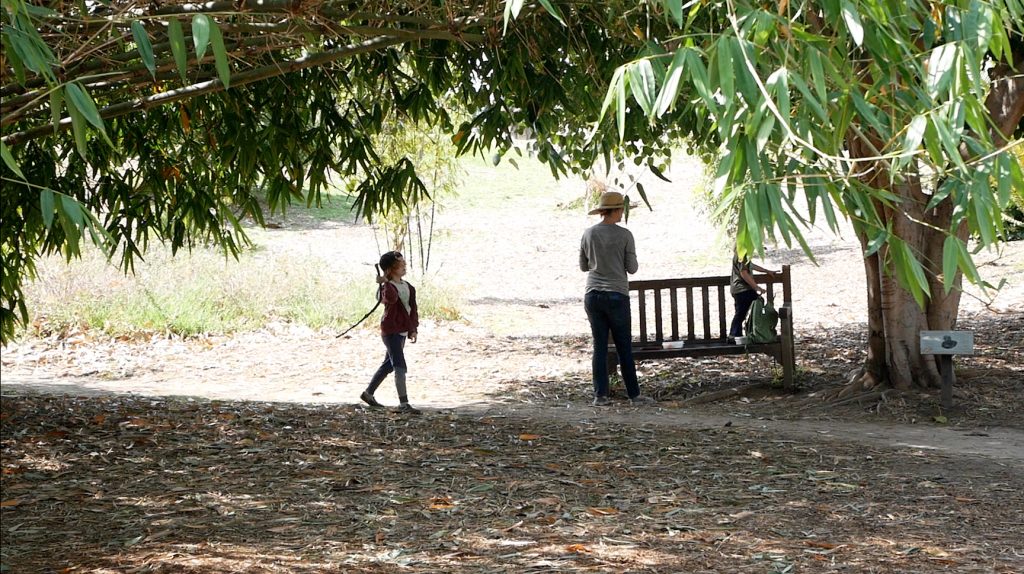 The Arboretum is a popular place for people of all ages.

The Arboretum is also home to a Bodhi tree, which was planted in celebration of the 14th Dalai Lama when he visited CSUF in 2000.

I’ve photographed, filmed and written about the Arboretum many times over the last three years for my video column. But, the first time I ever visited was back in preschool when I tasted squash and pumpkin seeds with my class in the children’s garden. When I was in third grade at Golden Hill Elementary in Mrs. Orr’s class, we took two field trips to the Arboretum: one was science-related and the other was historical. On the first trip, my class examined and observed nature, learning about photosynthesis and the anatomy of plants by using small microscopes to closely look at the leaves of a tree. On the second trip, we visited the Heritage House, learning about the history of Fullerton through a docent-guided tour of the Eastlake-style Victorian house and gardens of Fullerton’s pioneer physician, Dr. George C. Clark.

The grassroots push for an arboretum on campus began when plans were revealed that included ripping out a dying orange grove to build a parking lot. A group calling itself A is for Arboretum, not Asphalt, which included community members, faculty and students, began to protest the parking lot plan. To help the growing effort, biology faculty members told university officials they needed a place to grow plants not native to Orange County so they could teach their students at a nearby location. Ultimately, after a couple of sit-ins, the CSUF president at the time, Donald Shields, agreed that an arboretum could be built. So, in January of 1972, the Trustees of the California State University system gave approval to the planning of the arboretum at CSUF and a month later, set aside the twenty-six acres for the project.

On March 24, 1976, a Joint Exercise of Powers Agreement was made between the Redevelopment Agency of the City of Fullerton and the CSU Trustees where the Agency agreed to help with basic operations, finance the initial grading and construction costs and then co-operate in funding basic operations until December 3, 2020. When Redevelopment was ended by the state back in 2012, the funding through that channel dried up. Reportedly, a letter was sent informing CSUF that the city will not be picking up funding of the Arboretum after the end of the 2020 contract.

A presentation of CSUF’s new Master Plan, which may include turning part of the Arboretum into dormitories for students will take place at 10am and 5:30pm on April 10 in the lobby of the Clayes Performing Arts Center on campus. 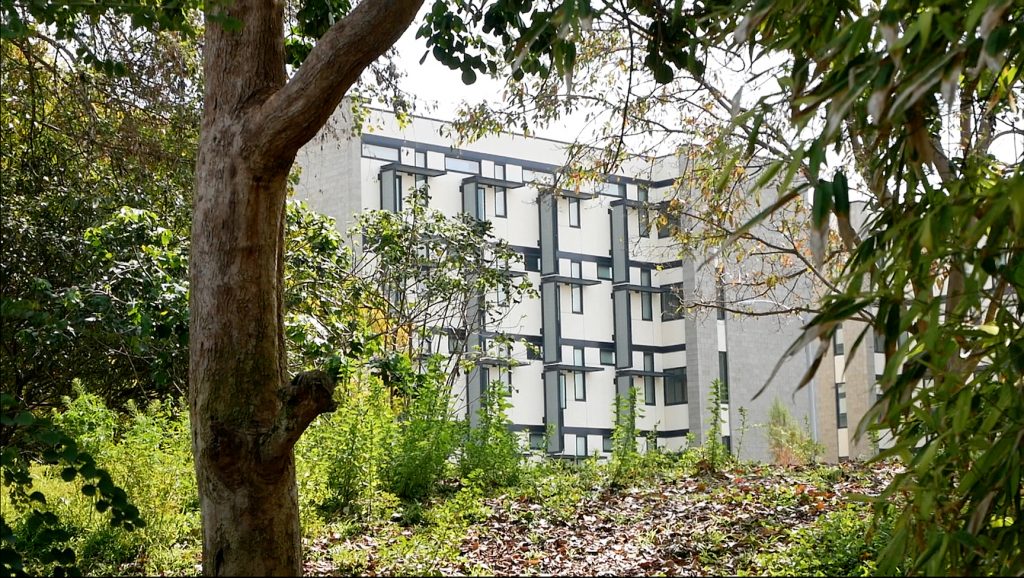 Student housing next to the Arboretum could be expanded.

“This is a special healing place for our youth, and amazing mentorships form at the teaching garden between the Arboretum staff, U-ACRE students and our youth,” Carissa Hart-Bunevith, Executive Director of Hart Community Homes and Monkey Business Café said. “I can’t tell you how important the Arboretum is to our community. It is a gem and a place to go to enjoy the beautiful flowers, the pond and relax in nature. It really brings people together and educates, empowers, and teaches so much to so many.”

Monkey Business is a nonprofit café in downtown Fullerton benefiting at-risk youth. The nonprofit has a partnership with the Arboretum where they grow fresh produce. From the farm, program participants learn about various aspects of farming: preparing the soil, planning a crop calendar, planting, best practices for growing harvesting, composting, responsible watering, cultural responsibility and sustainable practices. Ms. Hart-Bunevith said, “The vegetables are then brought to the café where they are processed by the youth and implemented into our menu as seasonal specials or introduced into our product line. The recipes are also broken down in a lab at CSUF by our youth for nutritional information with the UACRE (Urban Agriculture Community-based Research Experience) founder and professor Sara Johnson.” Monkey Business participants work side-by-side with university students, thus gaining exposure to the university setting.

When I visited, members of the farm team stood on ladders, picking citrus that would be used to make blood orange lemonade for the café. Volunteers from the partnership were harvesting their fresh produce in a wide open area toward the back of the Arboretum with CSUF dorms behind it. “The collaboration with the Fullerton Arboretum, U-ACRE Program and Monkey Business Café has been around for over 10 years,” Ms. Hart-Bunevith said. “In the beginning, I met with Arboretum Director Greg Dyment and Sara Johnson at a meeting at the Café and we had an idea to bring foster care youth, students and urban agriculture together. Over the years, the program has flourished and is now called the ICAN project that focuses on culinary, agriculture, and nutrition. It has support of a 4-year grant from the USDA.”

The Fullerton Arboretum also hosts other community events throughout the year, offering free, fun and family-oriented nature tours on the second and fourth Saturdays of each month. On Saturdays and Sundays from 2pm to 4pm, Victorian-dressed docents escort visitors into the past at the Heritage House. During the summer, the “Brews and Blues” event, which will be held August 17 this year, spotlights Orange County craft breweries and features a blues concert along with food trucks (drawing about 1,000 people last year). The annual “Veggiepalooza” draws backyard gardeners to chefs from as far as San Diego and Santa Barbara for a monster tomato and pepper sale featuring close to 300 varieties of tomatoes, peppers and varietal veggies all geared toward the home gardener and the annual Green Scene Plant & Garden Expo takes place this weekend on April 6 & 7th. Proceeds from these two events support plant conservation, environmental education programs and the diverse gardens of the Fullerton Arboretum.

To see my video of the Fullerton Arboretum click HERE.