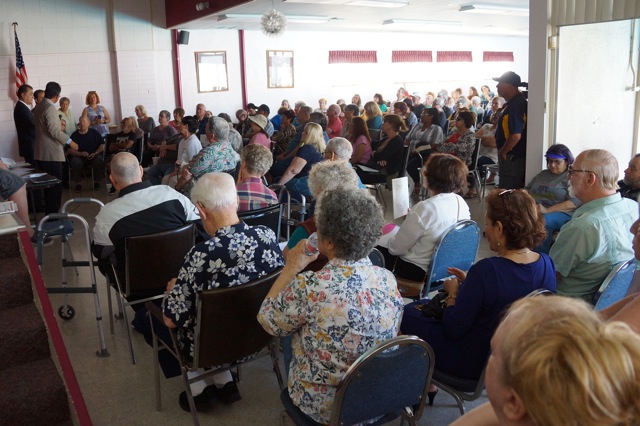 Anaheim Councilmember Jose Moreno announced to a standing room only group of mobile homeowners that if a proposed interim ordinance passes at the 5pm Anaheim Council Meeting on Tuesday, April 2nd – residents will get relief through November 2019 while the 44% to 75% increases in space rental of their lots at Rancho La Paz Mobile Home Park are under negotiation with the new owner.

The announcement drew applause. All the owners of the park’s 387 homes are seniors, with most in the 70-93 age range, and on fixed incomes. The space rent increase would put the monthly bills above what many receive on Social Security. “We’re not looking for free rent,” said one homeowner, “We just want a fair increase.”

Councilmember Moreno proposed the ordinance in response to requests by homeowners that the city find a way to help them in the looming space rent increase set for June 1. After talks with Anaheim and Fullerton councilmembers, and correspondence from state officials,  the owner agreed to extend the deadline until September – a 155 day reprieve – to allow negotiations with residents.  But, many wonder – what then and want a more permanent solution. 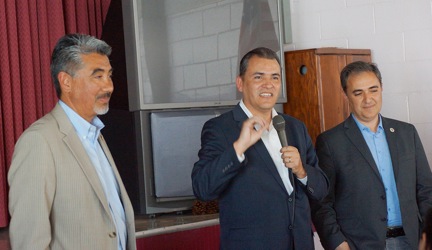 The homeowners pay for all utilities, repairs, maintenance, and property taxes of their individual  homes and merely rent the rectangular spaces their homes sit on. The park offers an onsite manager, a maintenance worker for communal areas, and access to a communal clubhouse and pool.

Under previous space  rents ranging from $680 to $980 the park brought in around $3.4 million in income per year. But, now that the new owner has taken over incoming prospective homeowners of units for sale at Rancho La Paz are being quoted space rental fees starting at $1,100 on the Anaheim side of the park and $1,200 per month on the Fullerton side. If applied at the lower monthly figure park-wide, such rents would bring in over $5 million per year.

The Rancho La Paz Mobile Home Park has both Fullerton and Anaheim residents.

New owner, John Saunders, is a partner of a group with a predatory business model of buying up senior mobile home parks and raising the rents thereby forcing residents to sell their homes at a loss and move out. Then, depending on zoning of the property, it is either turned into an all ages park which can bring higher rents or resold for other uses. The group currently has 46 mobile home parks in various stages of this process

Meanwhile the temporary Anaheim ordinance, if passed, will keep rent increases to 3% -or tied to the Consumer Price Index – whichever is the largest amount. This will provide residents with a known annual raise but also be fair to the park owner.

The temporary ordinance would give the park owner’s non-binding promise to negotiate an official standing and give homeowners some negotiating space. An added bonus of the temporary ordinance is that it would apply to all 27 mobile home parks in Anaheim (but not those on the Fullerton side).

There is some movement on Fullerton side also. According to Mayor Jesus Silva and Councilmember Ahmad Zahra, Fullerton will discuss rent stabilization measures at the 6:30pm Tuesday April 2nd meeting. Although no action will be taken at the meeting – depending on the council’s decision, staff could be directed to look into the options and their consequences and bring the information back for council action at a meeting in May. 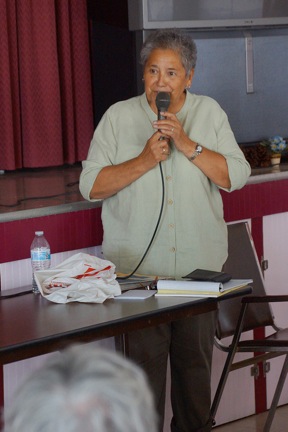 Rancho La Paz homeowner Lupe Ramirez sparked ongoing efforts to get a fair deal with the owner of the park.

As mentioned by Lupe Ramierz, who sparked the search for a fair solution, “the officials of both councils will only make good decisions if you show them you care by attending the meetings.”

This kind of situation has been happening to mobile homeowners for some time. For an interesting article on Saunder’s take over of parks in Huntington Beach in 2014 visit http://www.orangejuiceblog.com/2014/08/huntington-beachs-mobile-home-uprising-which-side-are-you-on/ 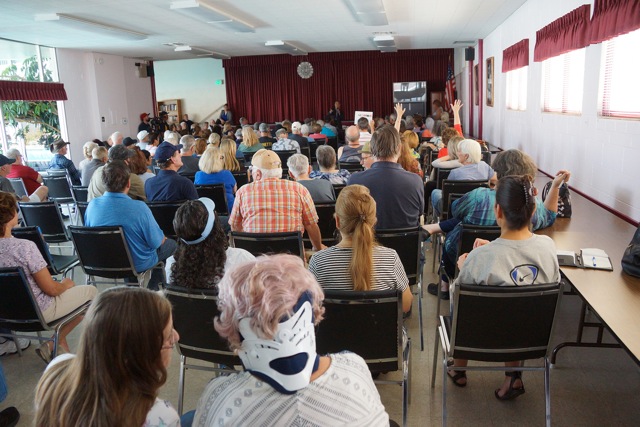 Homeowners at a standing room only meeting with city officials on April 1.