CSUF Gives Options for Future of Arboretum: Some Construction in All Proposed Scenarios

Hundreds of concerned citizens showed up at a public forum at Cal State Fullerton on April 10th to give their feedback and concerns regarding the University’s proposed “Master Plan,” all versions of which include some construction in the Fullerton Arboretum. 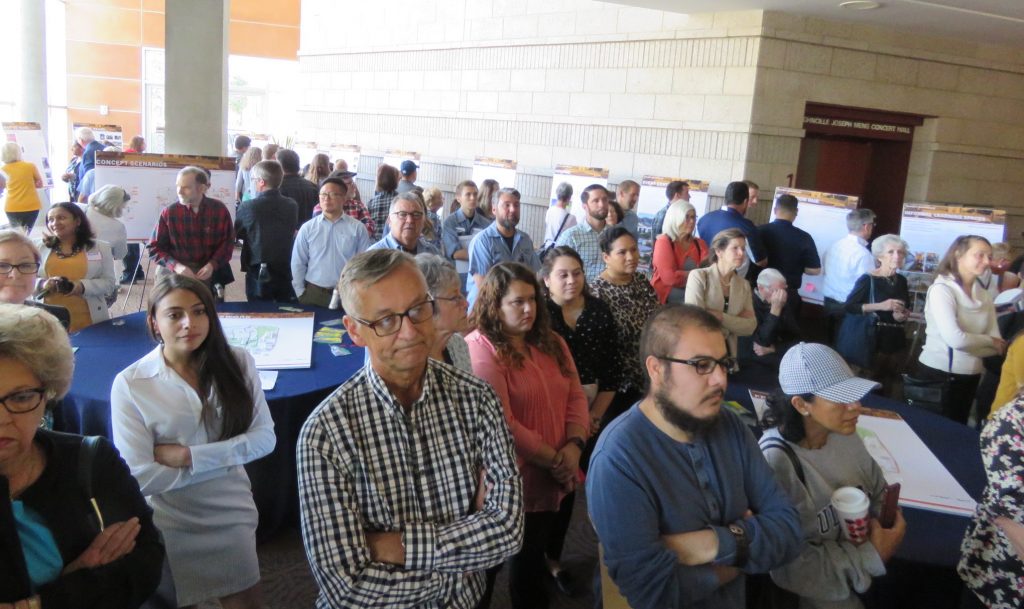 Hundreds of concerned citizens gathered at CSUF to give input on the Master Plan.

At the forum, the university’s contracted architects (Flad Architects) presented three proposed scenarios for the future of the Arboretum, which included various amounts of construction. The common denominator in all three proposals was something called “Conference Center: Housing and Meeting” which straddles the southeast corner of the Arboretum grounds.

All three proposed options include some construction in the Arboretum.

Option A proposes this “Conference Center: Housing and Meeting” only. 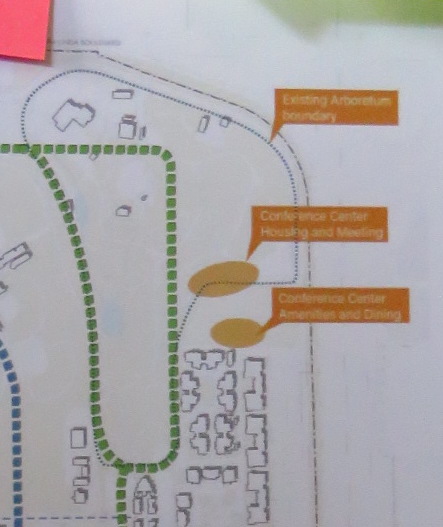 Option A proposes a “Conference Center: Housing and Meeting”

Option B proposes this “Conference Center: Housing and Meeting” as well as a “Student Wellness Center” at the southern tip of the Arboretum. 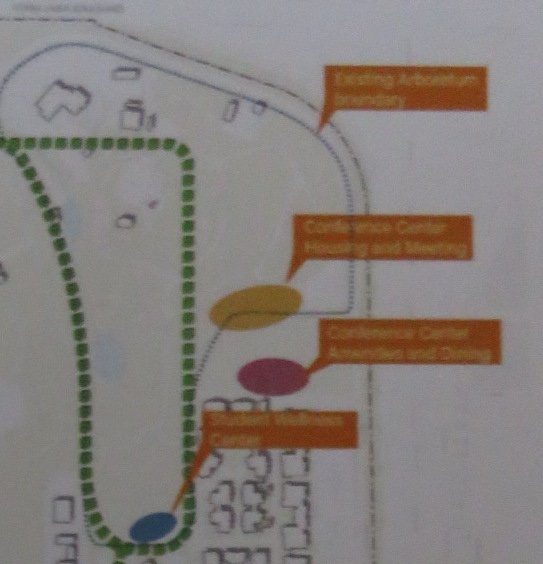 Option B proposes the Conference Center/Housing and a Student Wellness Center in the Arboretum.

Option C is the most building-intensive. It includes: 1.) Conference Center: Housing and Meeting 2.) Student Wellness Center 3.) a Sustainability Center 4.) a Greenhouse and Research Building 5.) A new Administration building and 6.) a Maintenance Building. 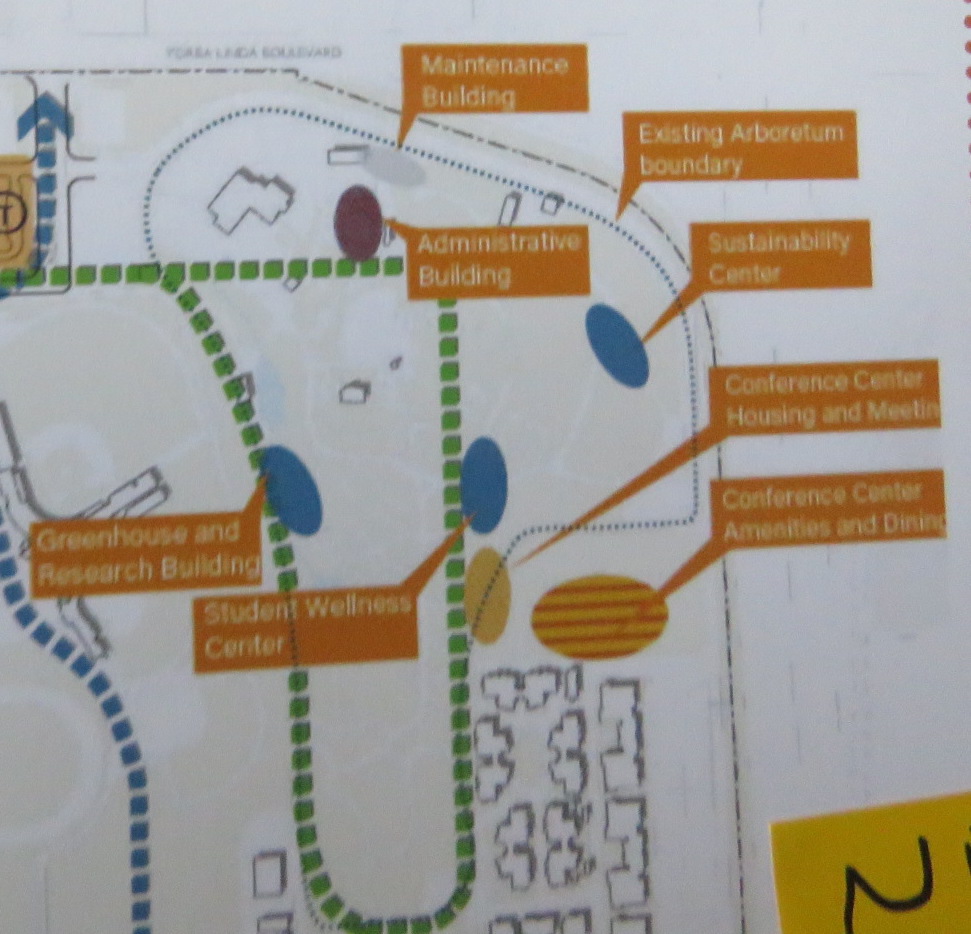 Attendees of the forum were asked to place stickers and “post-it” notes on their preferred option, and to give feedback. Option A was the most popular, though there was little to no support for this “Conference Center: Housing and Meeting” building. 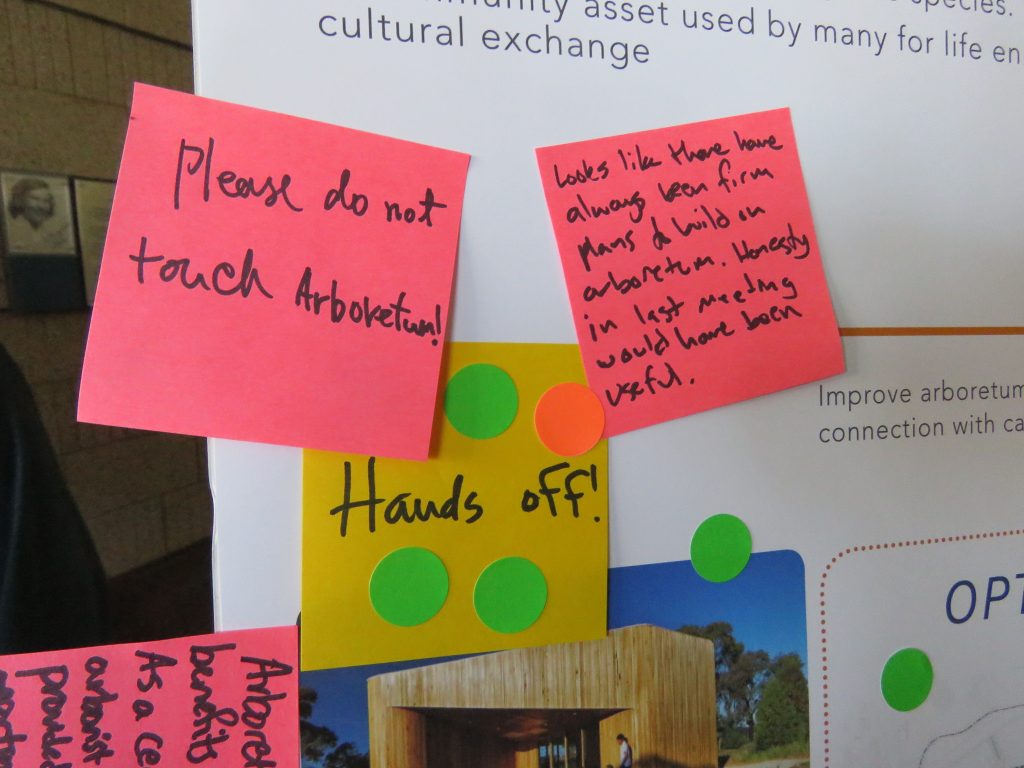 During a question and answer session with Danny Kim (VP of Administration and Finance at CSUF), a woman asked, “Why is there not a single proposal that does not build on the Arboretum land?…I do not feel that it’s representative of the comments that your office received…At the previous public forum in June of last year, the number one favorite place on campus was the Arboretum [based on the number of post-it notes it received]. And to not have a single option where it remains as is or under the pervue of those managing it now, I think is irresponsible.”

There was a long and resounding applause from the hundreds of attendees. 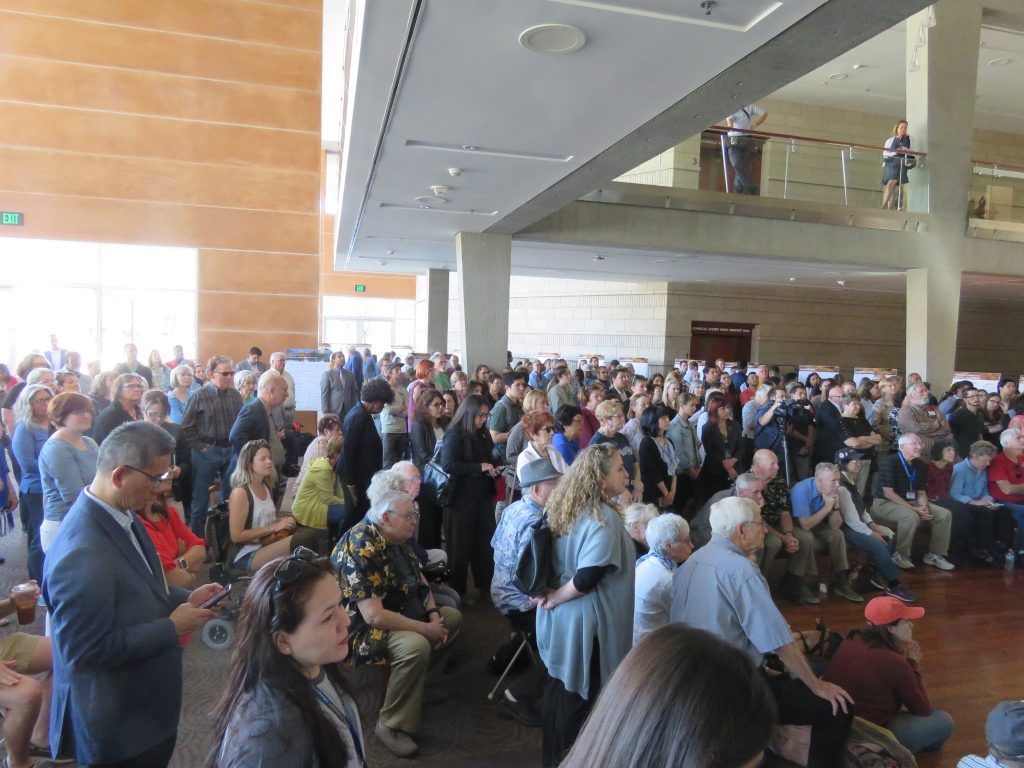 It was mostly standing room at the open forum.

Kim did not directly answer that question, though it was hard to hear him over the applause. He simply said that the Arboretum is world class, and that the university wouldn’t do anything to jeopardize its level IV accreditation.

Later during the open house, I asked the same question of Brad Leathley from Flad Architects, “Why wasn’t there an option that included no buildings?”

His ultimate response was that that idea “didn’t work out.”

Presumably, the purpose of the forum was to allow the public the opportunity to provide input on a range of options for the future of the Arboretum, as the city’s agreement with the University runs out in 2020, and the control of the land will revert to CSUF.

By 10:30am, the lobby of the Clayes Performing Arts Center was packed with hundreds of people, most of whom were there in support of the Arboretum. 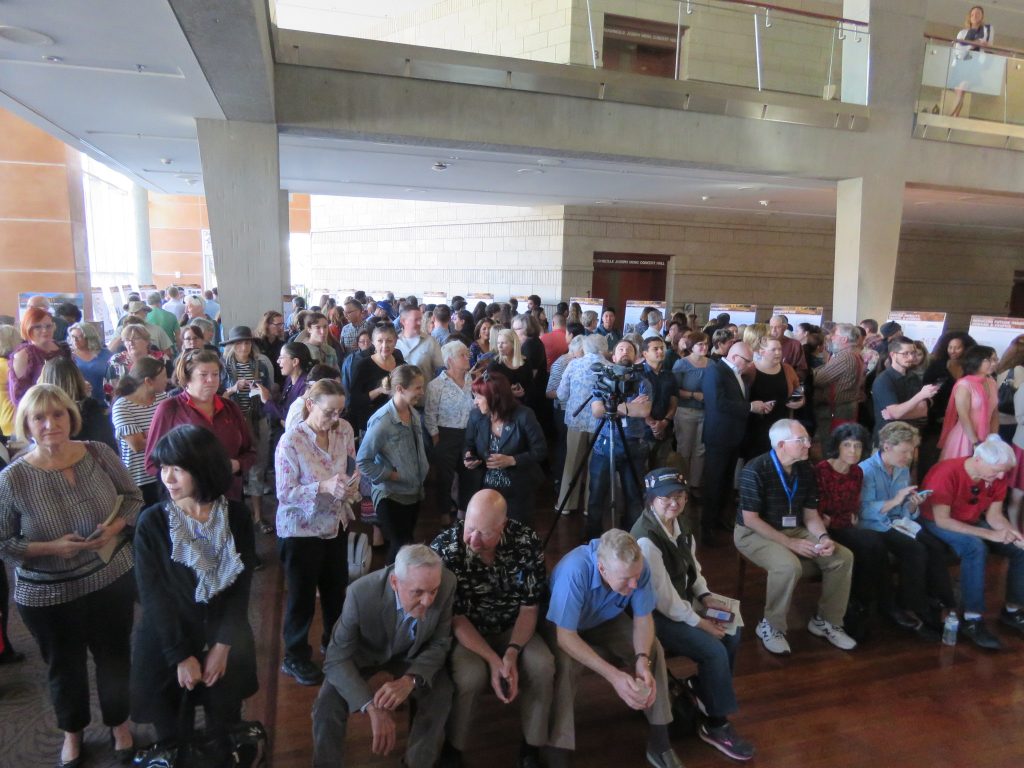 As Leathley began his initial presentation, an elderly woman in the audience asked why there was no seating, especially since the hundreds of attendees were standing in the lobby of a large theater.

“We’re not sitting in the theater because the campus felt this was the right place to do this,” said Leathley. 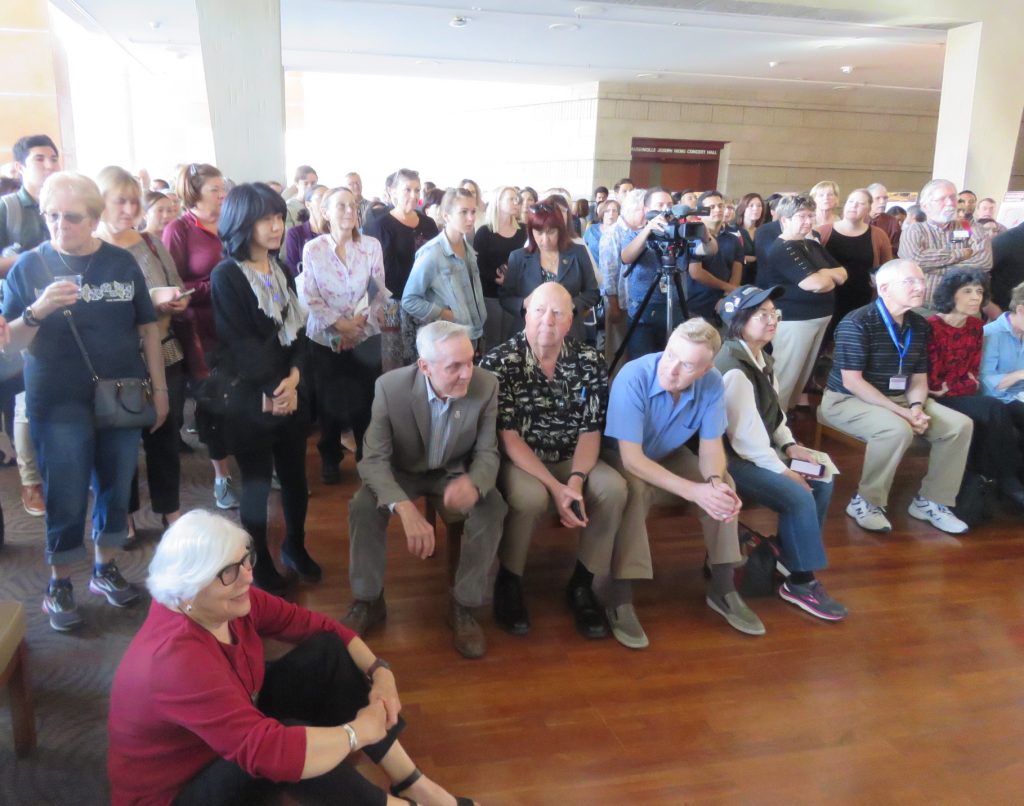 Some attendees, such as Molly McClanahan, sat on the floor because there was very little seating.

Leathley gave an overview of the University’s Master Plan process, which includes a vision for not just the Arboretum, but the whole campus. Part of the impetus for building in the Arboretum [and elsewhere] is a desire to transform CSUF from a commuter campus to one where there is more on-campus housing and other student amenities. 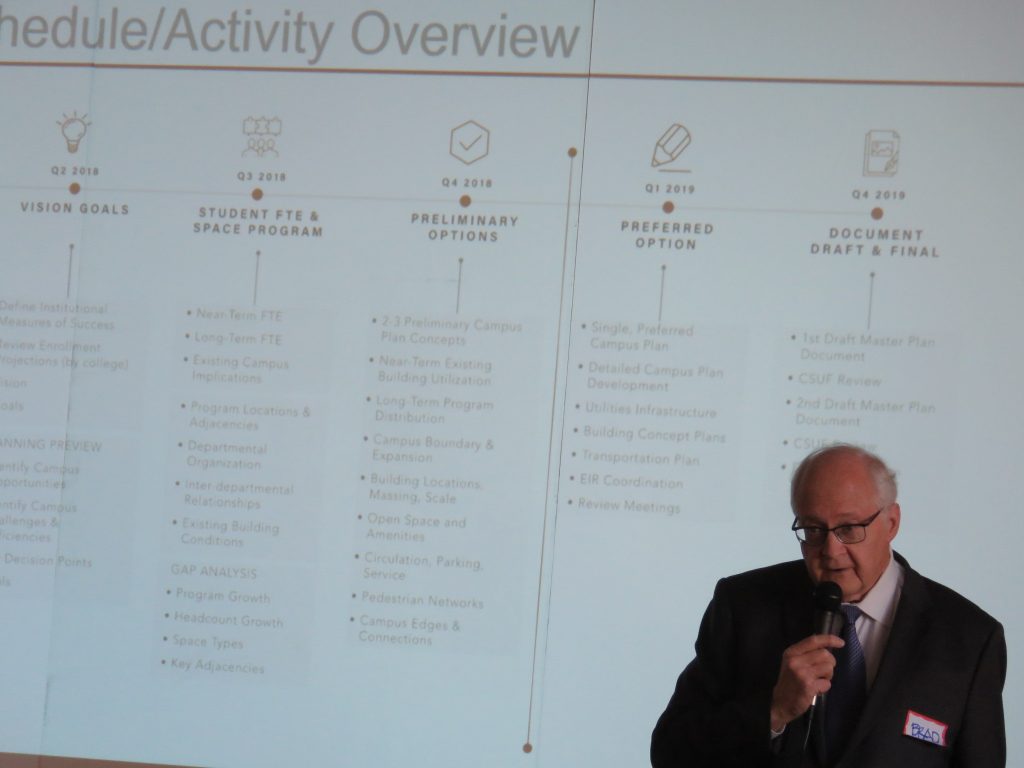 Brad Leathley from Flad Architects gives a presentation on the Master Plan.

After Leathley’s brief presentation, which didn’t include much discussion of the Arboretum, a member of the audience said, “I believe that the large majority of the people here today are from the community, and I think one of their main concerns is the Arboretum. It would be really useful to have 10, 15, 20, 30 minutes of question and answers about the Arboretum itself, not just one slide, so that people can have proper input right now, not just on the boards.

“Alright, I think that’s fine,” said Leathley, “I don’t think we should hold everybody up.” He did not appear excited about fielding additional questions.

Jodi Balma, a CSUF alumna and current political science professor at Fullerton College stepped up, grabbed a microphone, and said, “Here’s the problem with all these wonderful, beautiful, very expensive layouts. It’s a false premise. You’re not thinking outside the box. What about dorms at University Village? What about taking over Nutwood? What about the Brea Mall, which is losing Sears and Macy’s with a direct bus line to Cal State Fullerton? Why not have dorms there? Let’s think bigger.” 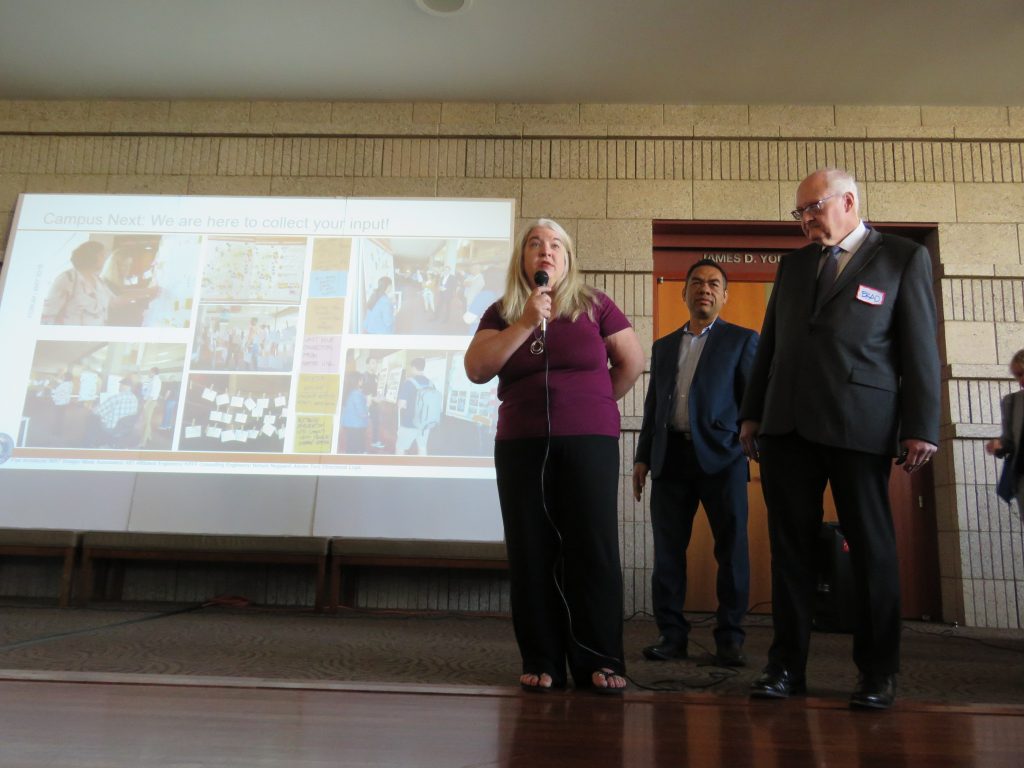 Emil Zordilla, CSUF Director of Planning and Design, said, “Thank you very much for that input. We’re going to take a break now to bring in some chairs so more people can sit down.”

After some folding chairs were brought in, Danny Kim arrived for the Question and Answer session.

“I do apologize that there’s still a lot of, I guess, questions that you weren’t able to get answers to,” Kim said, “We did work pretty heavily for the last 2-3 months trying to get the information out into the community.”

He mentioned a recent article in the Orange County Register that he thought would have clarified peoples’ questions.

That article, if you can access it behind the Register’s paywall, had the misleading title  “Cal State Fullerton officials say Arboretum will not be demolished to make room for dorms, but professors, students are concerned.”

To which a groundskeeper of the Arboretum replied, “Yes, there is.”

“Well, okay there is one, but we also have a greenhouse on the other part of the campus. So there’s a desire to expand that,” Kim said. 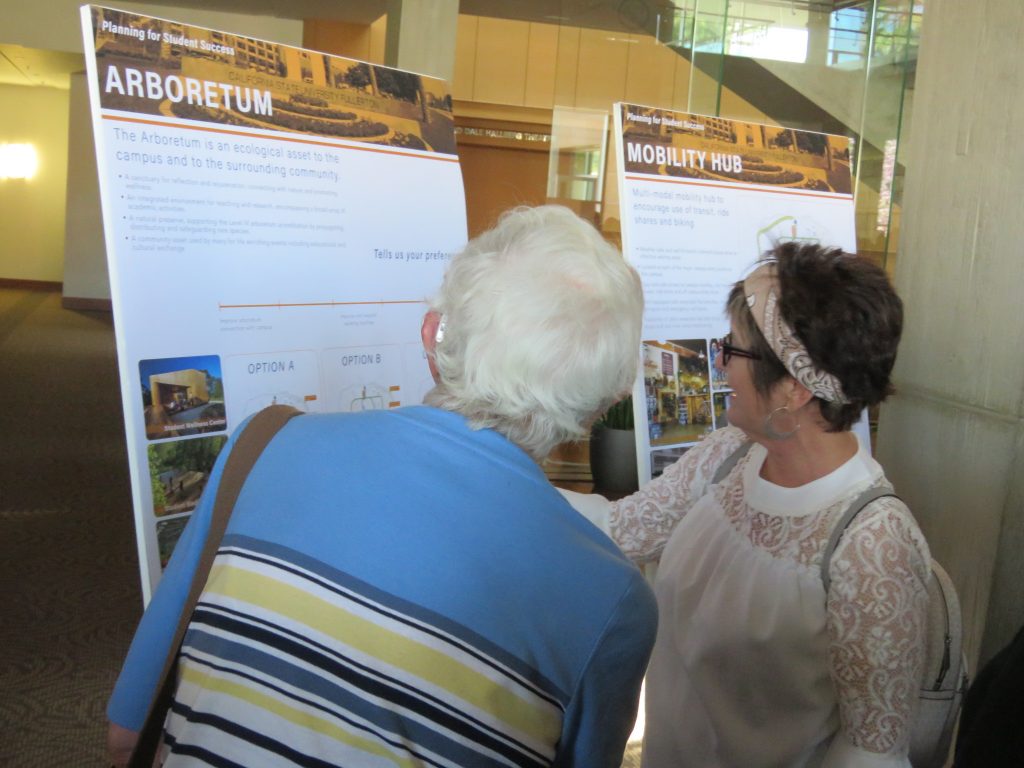 Attendees give their input on the Arboretum.

When asked about housing, Kim said, “I can’t say that’s completely off the table,” though he pointed out several times that anything presented today was just an idea.

“Just because we put a Conference Center on the master plan, there’s no guarantee it will ever be realized, but we have to do that because we have to set this campus up for the future,” said Kim.

A member of the Friends of the Arboretum said, “You keep mentioning that our strategic plan for the Arboretum is requesting a Conference Center. It is not.”

“The conference center idea came about during the conversations with various folks in the Arboretum,” said Kim.

A man in the audience asked the crowd of hundreds, “Is there anybody here who supports the idea of a Conference Center on the Arboretum?

There was a resounding “No!” from the attendees.

“I understand what you’re saying, but we’re putting it as a placeholder,” Kim said. 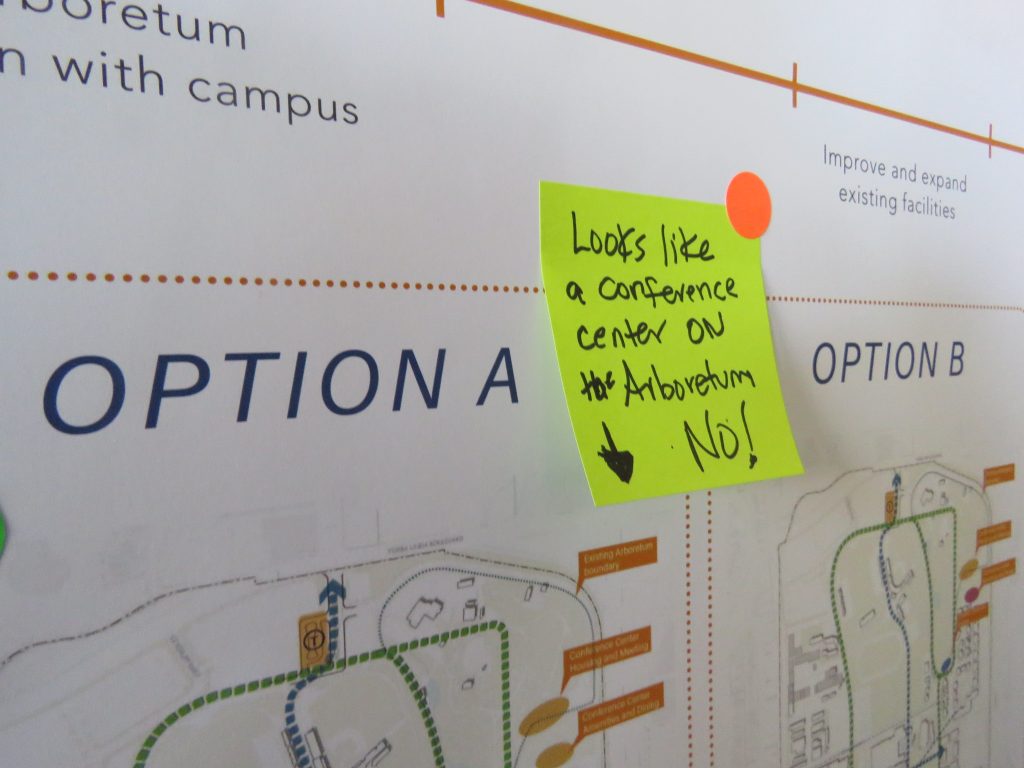 Later, I asked Leathley who he’d spoken to at the Arboretum who had expressed support for the Conference Center/housing, and he could not give me that information.

A representative from the Fullerton Garden Club, who have been at the Arboretum for many years, asked whether building in the Arboretum would impact the Level IV Accreditation.

“Anything we do will be done in a thoughtful way involving all the stakeholders,” Kim said, “The last thing we want to do is impact our accreditation.”

A graduate art student said, “I know a lot of undergrad and grad students use the Arboretum for studying, for drawing specimens.” She suggested that, instead of building new buildings, the university use the existing green space for wellness programs. 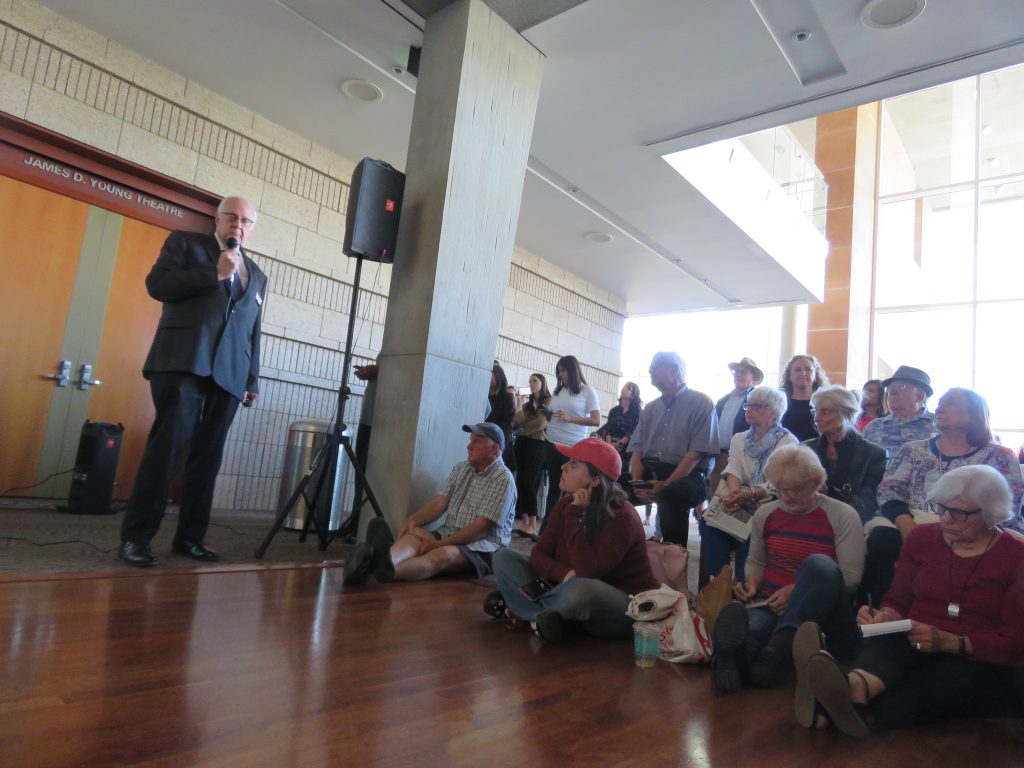 According the Leathley, the final draft of the CSUF Master Plan, incorporating the public feedback, is scheduled to be completed by the end of the year.

After the presentations, I spoke with CSUF student Sarah Rubalcava, who started one of the petitions on Change.org to protect the Arboretum, which now has over 17,000 signatures. I asked her why she decided to create the petition.

“For me, it was important because ever since I was little, my mom would take me to the Arboretum. I have a lot of memories of her there and she passed away in 2012 from cancer. So for me that’s a place where I go to connect with her. Having it remain the same and still intact and protected is very important to me, as well as many people who have had loved ones pass and have benches there for them, or spread their ashes there,” said Rubalcava, “And also just the educational purposes of it—all the third graders who go there to study. It’s just a vital, important part of the community.” 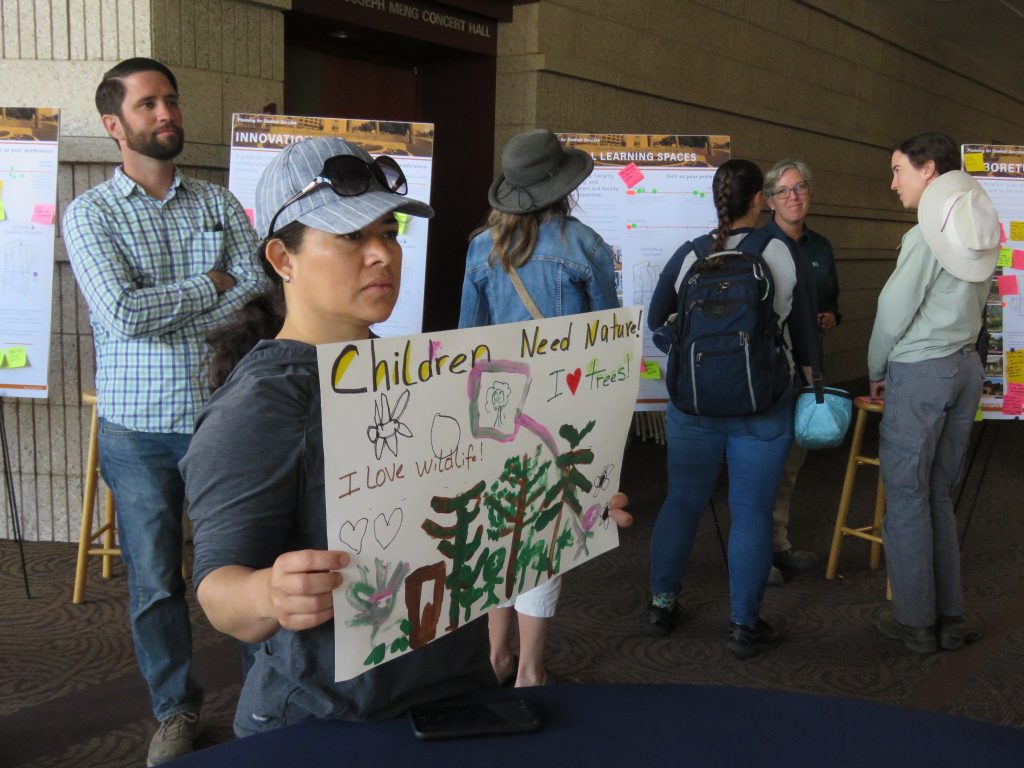 To submit comments on the CSUF Master Plan visit their web site HERE.