Although super blooms have caused traffic jams throughout southern California, there are many miniature wildflower blooms that are much less crowded. According to NASA’s Earth Observatory, “these types of ‘super blooms’ can occur when heavy rains fall over arid areas, which is exactly what happened in Southern California. In 2017-18, much of Southern California endured abnormally dry and drought conditions. The lack of moisture killed invasive grasses that can keep the wildflowers from blooming. With the grasses dead, the wildflower seeds were able to absorb the rain during the abnormally wet winter of 2018-19.” As a result, the growth began.

After receiving a suggestion from a 91-year-old Observer subscriber, I decided to check out some examples of local wildflowers. He said people don’t have to go very far out of town to see a spectacular bloom. While crowds of people have congregated at many of the monstrous flower patches popping up across the state, there weren’t many visitors on the trails I took. 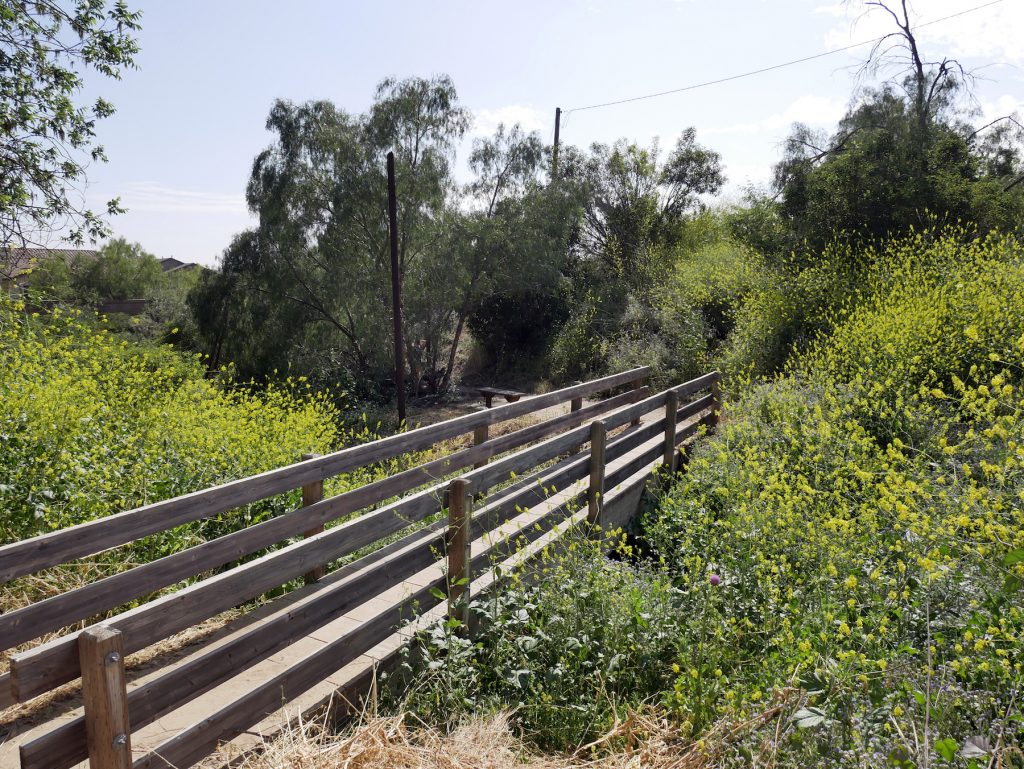 My first stop was the two-mile outdoor trail beginning at the Olinda Oil Museum and running along the hillside above Carbon Canyon Road. Tucked away in a neighborhood off Santa Fe Road in Brea, across the street from Carbon Canyon Regional Park, the Olinda Oil Museum sat against a backdrop of yellow, blue, purple and white wildflowers. Fighting against a stream of cars full of people waiting to find the picture perfect spot in Chino Hills State Park, I turned down a side street and parked in the oil museum’s lot without a problem. Since spring is coming to a close, this is the best time to take a hike on the historic Olinda Oil trail. Visitors who plan on hiking down the trail leading into the hills may want to start early before it gets too warm for comfort.

Making sure to stay on the path, I made my way up a winding dirt trail that twisted and turned through pockets of thin towering yellow flowers with their green stems growing out from the ground. Mixed amongst the yellow, purple lupine were sprouting. Lupines used to be a part of the Native American diet. The toxic components were removed from the leaves and seeds by boiling, which was the practice with many other plants that contained toxins.

I spotted a couple of bull thistles, which had lobed leaves with sword shaped sections and spines at the tips. According to UC Weed Science, these thistles “germinate and grow into rosettes during the winter, then in spring, they bolt and produce purple flowers. Like a lot of our weeds, these species originated in southern Europe, southwestern Asia, and the Middle east. They ‘learned’ how to survive alongside human agriculture early on.” Before leaving, I also saw some white flowers that sort of resembled poppies.

Back in Fullerton, off Rosecrans, I parked along the side of the street running in front of

Ralph B. Clark Regional Park, where a vibrant yellow plant covered the small hillside. Every day, on my way to and from college, I see these clear yellow flowers growing on the hill above a wide open field. These are known as black mustard.

Black mustard is actually an aggressive non-native weed masquerading as a colorful wildflower as it blankets some of Southern California’s scenic hillsides. According to National Parks Traveler, “biologists and ecologists say the region is simultaneously experiencing two very different ‘super bloom’ seasons: one is comprised of stunning native wildflowers, while the other is made up of a pernicious weed called black mustard.” So, while the plant may look perfect for a photo on social media, it’s actually rather harmful and can push out native plants, such as California’s poppies and lupines. Black mustard produces chemicals that prevent native plant germination and grow quickly, sucking up water that would otherwise be available for native plants. Joseph Algiers, a restoration ecologist for Santa Monica Mountains National Recreation Area recently said in an interview, “In a couple of months, the mustard will dry out, turn brown and become tinder for wildfire. Sadly, newly burned sites are more subject to invasion.”

Most of us may place these flowers in the same category as poppies, lupine or phacelias. However, looks can be deceiving. As I walked down a sandy path in Ralph B. Clark Regional Park with my camera and tripod in hand, the trail was surrounded on either side by clusters of black mustard with sturdy, bright green stems that rose up to tiny yellow flowers at the tops.

Closer to downtown Fullerton, I noticed more black mustard growing on the north side of Hillcrest Park, just above the sports field and around the newly installed steps. After the early morning rush of exercisers on the stairs, I decided to park at the top of the hill and walk down. There was a less popular dirt trail halfway down the hill, where I spotted some black eyed susans growing amongst the black mustard. According to the Old Farmer’s Almanacwebsite, “the ‘black eye’ is named for the dark, brown-purple centers of its daisy-like flower heads.” 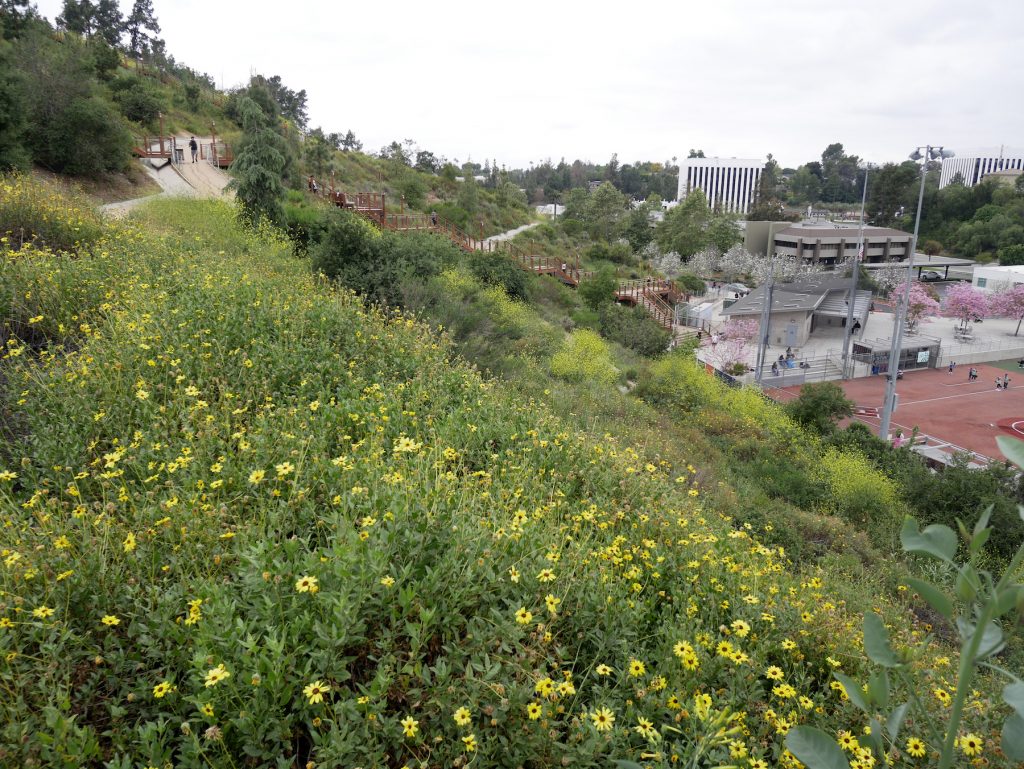 Another Observer reader called in and recommended the wildflower bloom in Coyote Hills. However, I didn’t have an opportunity to look into it. By summertime, these local wildflowers will no longer be colorful. They will be brown and a fire hazard, so now’s the time to check out the beautiful bloom in north Orange County.

To see the wildflowers in our local hills, check out my video by visiting the Observer website and clicking the tab labeled “Local.” Underneath that tab, click on “Emerson Little YouTube Channel,” which should take you directly to my page.