Panel Discussion on Cannabis in Fullerton

Former state senator Josh Newman moderated a quarterly discussion hosted by Neighbors United for Fullerton on May 6 at the Fullerton Library which explored the question, “Is there a Place for Cannabis in Fullerton’s Future?”

Fullerton City Councilman Ahmad Zahra, Fullerton’s Interim Chief of Police Bob Dunn, and CEO of Eight88Hospitality, Richard Ham, provided their perspectives as a policymaker, law enforcement, and as a businessman in the cannabis industry.

While the state allows adults of 21 years or older to grow, buy, possess, and use limited amounts of marijuana on private property by smoking, vaping, ingesting, or as a topical rub, cities can disallow commercial growing, processing, sales, and public use within their jurisdiction. Cities, however, cannot prohibit deliveries to its residents by state licensed sellers from outside the city.

There are controls similar to those on alcohol that limit how one may transport weed in a car and prohibitions against using while driving or riding in a car. Driving under the influence or “drugged driving” is just as illegal as drunk driving.

State licensed sellers collect 15% in state taxes in addition to local taxes and fees. When taxes are too high, it drives buyers to purchase from illegal, unregulated and sometimes unsafe “underground” sources rather than more costly legal sources.
The Federal government still classifies cannabis as an illegal drug. Financial institutions that accept profits from cannabis sales can be charged with laundering drug money. This causes state licensed sellers to run a cash only business which makes it difficult to track sales and taxes owed as well as creating a risk for sellers with large amounts of cash who may become a target for theft. 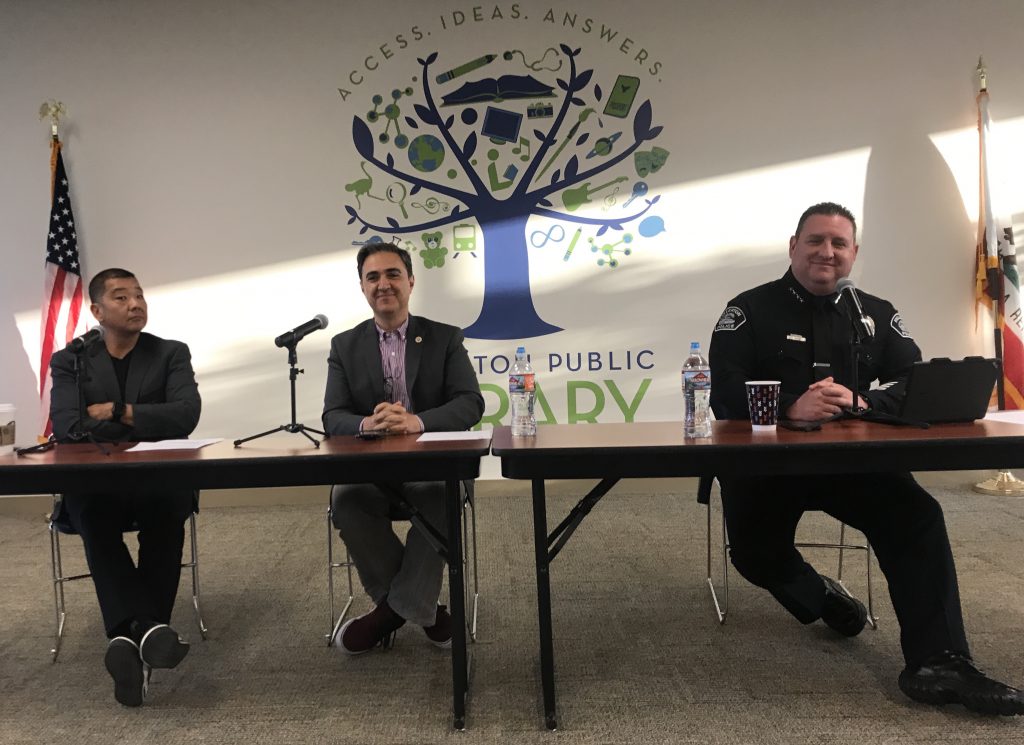 Fullerton City Councilman Ahmad Zahra, Fullerton’s Interim Chief of Police Bob Dunn, and CEO of Eight88Hospitality, Richard Ham, provided their perspectives as a policymaker, law enforcement, and as a businessman in the cannabis industry.

Newman said there are only 35 cities in California that allow any cannabis industry operations or sales, There are 620 licensed shops in the state, and, Orange County remains the most restrictive county, despite Orange County voter approval of Proposition 64 by a 4% margin. Only Santa Ana allows storefront operations and La Habra permits distribution and testing.

Historically, the Fullerton City Council has rejected allowing marijuana businesses or even putting a city ordinance before the voters of Fullerton to determine whether dispensaries or other cannabis-related business should be permitted.

Councilmember Flory attended the NUFF forum as did Fullerton Republican Women Federation President Gretchen Cox and former Fullerton School Board Member Minard Duncan. Mayor Silva was also present at the start, but left after Councilmember Zahra stated his concern of a potential Brown Act violation with a majority of councilmembers present.

Zahra explained his personal experience with cannabis. In hopes of alleviating chronic pain from fibromyalgia, years ago, he received a prescription for medicinal marijuana. But he was “reluctant” to try it and never filled the prescription.

Interim Chief Dunn said he is only concerned with doing what the council asks him to do and policing within the limits of the state law according to Proposition 64. He said he is, ”reluctant to get behind legalization” and thinks legalization was “premature.”

Ham described himself as a pro-cannabis Korean immigrant who grew up in Cerritos and worked for Hilton Hotels prior to launching his business. He says he has a 3-year-old child and has concerns about how to teach kids how to use cannabis safely when they are old enough, the same as alcohol. He said that a portion of tax revenue from the industry “Should go to education, medical research, policing and enforcement of the elicit market.”

Moderator Newman asked the panel a series of questions:

What are the implications of the state licensing deliveries in any city
regardless of the local prohibitions?

Dunn said he thinks people are confused about what is legal and what is not. He said the department receives complaints about deliveries and people smoking cannabis where it is not illegal. He says it creates “a lot of effort with little return” and more time spent educating people about the law than enforcing it. Dunn also said delivery drivers carrying cash can be a targeted by criminals.

Zahra said the city should create some rules and regulations that would create clarity for police.

Ham said Santa Ana dispensaries take credit card payment and cannabis sales are “cash heavy” like bars. He said onsite sales locations can utilize vaults that track cash intake for taxing and make cash inaccessible to thieves. Ham said that delivery into the city is based on demand from residents and Fullerton is “not getting any benefit from it.” When he began to suggest that homeless people might be beneficiaries of new city profits, some people in the audience objected, saying that marijuana causes homelessness.

Could the Kimberly-Clark site be a future opportunity if Fullerton were to begin permitting some industry, sales, or public use?

Ham recommended that keeping cannabis businesses within a specific area would make it easier to “keep an eye on” and to regulate.

Dunn restated his support for “whatever the law is,” but warned that other states don’t allow a single entity to participate in more than one aspect of the business. As an example, the same business cannot grow and sell.

Zahra said that people like to regulate anything new and this “should not be an exception.” He said that public safety should help determine how to manage the businesses efficiently and rules on revenue generation and distribution. He said, “It could potentially be something to benefit our community,” with manufacturing jobs paying union wages at $25 to $30 per hour with benefits.” He said it could also benefit the city with tax revenue going to the police, schools, or infrastructure.

How can Fullerton ensure there would not be a negative impact on young people?

Zahra said young people are already aware of cannabis from illegal shops “popping up” in their neighborhood and next to schools. He said unregulated sales can expose people to cannabis laced with fentanyl. If Fullerton were to permit sales, the city could regulate purchases and use a portion of the tax revenue to educate people about the dangers. Revenues could also pay for more police to combat the “black market” sales. Zahra said “You don’t want a case where it is out of your control. That is where children get exposed.”

How could Fullerton ensure that legal sales would “prevail” over the illegal market?

Zahra said that the NUFF discussion was a good start. He recommended more discussion among public safety and businesses on how to collect and allocate revenue and a discussion on the potential effects on the community.

The discussion continued with the panel responding to questions submitted from the audience. Zahra said there is “ambiguity” between medical and recreational Marijuana and Code Enforcement resources would be better used correcting “substandard living conditions” rather than chasing down illegal cannabis shops. Dunn said that property owners are cooperative with City efforts to remove tenants operating illegal cannabis-related business.

Dunn and Ham had different views on whether legalized cannabis creates a danger to the community. Ham referenced a 2014 article in the Huffington Post that reported a decline in crime after Colorado legalized pot. But he also said that illegal sales continued in Colorado because of high taxes on cannabis and, “There is going to be crime at the illegal dispensary.”

Dunn said that he learned from a 2016 symposium hosted by Anaheim that children are accidentally consuming their parents’ edibles and there is a “drugged driving problem.” He also cited a 100% increase in homelessness since Colorado legalized pot and businesses with “cash-in-hand” create a target for criminals.

Zahra said that the Council needs to have an objective discussion of data with public safety as “the most important element” to “craft a policy that makes sense.” Zahra discussed the need to educate children about the negative effects on early childhood development so kids won’t use it – similar to teaching kids about the effects of tobacco.

He recognized the potential economic benefits of the industry citing the city’s need for “new sources of revenue and business development” to fund road repair and retain fire and police officers. He said traditional industries are leaving and “This is an industry that is bringing jobs with good middle class wages.”

Ham said, “As soon as you open the flood gates, you don’t even know (how much business interest there will be).” He said that Colorado has “Bud and Breakfast” tourism that attracts people from Asia where cannabis is illegal.

Code Enforcement has shutdown 8 illegal shops in Fullerton, according to Dunn. The city will continue expending resources on what Zahra called a game of “Whack-a-Mole,” shutting down unlicensed pot shops that move from one location to the next, until Fullerton develops a comprehensive plan for controlling and possibly benefitting from the burgeoning cannabis industry

Video of the Session

For those who missed the session, a video taken by Damion Lloyd of the NUFF  discussion on cannabis in Fullerton’s future is now posted to the Fullerton Observer’s YouTube page. Here’s the link: https://www.youtube.com/watch?v=aJJbSzU8gEg