Aretha Franklin had already established herself as the number one R & B singer in America with singles like “Respect,” “Spanish Harlem,” “Natural Woman,” and “Bridge over Troubled Waters.” She had made twenty R & B albums and received five Grammys, but in 1972 the Queen of Soul decided to return to the gospel music she had grown up with in her father’s church.

Born in Mississippi, Aretha spent most of her early life in Detroit, where her father, Reverend C.L. Franklin, was pastor of the New Bethel Baptist Church, his sermons famous throughout the country. Even Martin Luther King traveled to Detroit to hear Reverend Franklin preach.  By the time Aretha was ten, she was singing solos in his church, and by age 12, she was traveling with her father and the church’s performing choir.

But when she made her decision to return to singing gospel hymns, Aretha chose to stage and record her first album in Reverend James Cleveland’s  New Temple Missionary Baptist Church in Watts with back-up from the church’s choir. Known as the Southern California Community Choir, the singers were already famous for their stunning harmonies and enthusiastic performances, as well as their black garbs set off with shiny, silver vests.

Warner Bros. was interested in filming this momentous event and sent a newly hired Sydney Pollack to direct. Although “Amazing Grace” can be categorized as a documentary, it has no interviews and no narrative voice. We see the events as they unfold over two nights of performing with no effort to conceal the soundmen, cameras, and crew; wires and equipment lie scattered throughout the room.

Since the audience consists of the church’s parishioners, the audience is mostly African American except for a couple of interlopers, most prominently Mick Jagger and Keith Richards seated in the audience, as transfixed as we and the parishioners are.

Aretha, with her guileless face and powerful voice is transfixing. She wears a shimmery caftan, ornamented with delicate beads, and has an Afro hair style, popular in that era.  Her voice has an energy reminiscent of revival meetings.  The depth of her tones, the sophistication of her harmonies, her occasional forays into scat are slightly reminiscent of Mahalia Jackson, but Aretha Franklin’s voice has a quality and style that only she owned.

Although appearing effortless in her performance, Aretha’s face becomes beaded with perspiration. At one point, her father, seated in the front row, gets up and with his handkerchief wipes his daughter’s damp face. Reverend Franklin also addresses the audience during a break between songs. Occasionally Aretha accompanies herself on the piano, but most frequently it is Cleveland at the piano. Also accompanying Aretha are drummer Bernard Purdie, guitarist Cornell Dupree and bassist Chuck Rainey.

The album of spiritual music made on those two evenings in Watts became a best seller, some of the spirituals being “What a Friend We Have in Jesus,” “Wholy Holy,” “Mary, Don’t You Weep,”  “Climbing Higher Mountains,”and “Amazing Grace.”

So why did this landmark performance not appear on-screen until now? Apparently, there had been a technical glitch in the filming that caused the picture and the sound to be out of synce. Producer Alan Elliott purchased the footage and had it painstakingly synchronized. We are the richer for it. 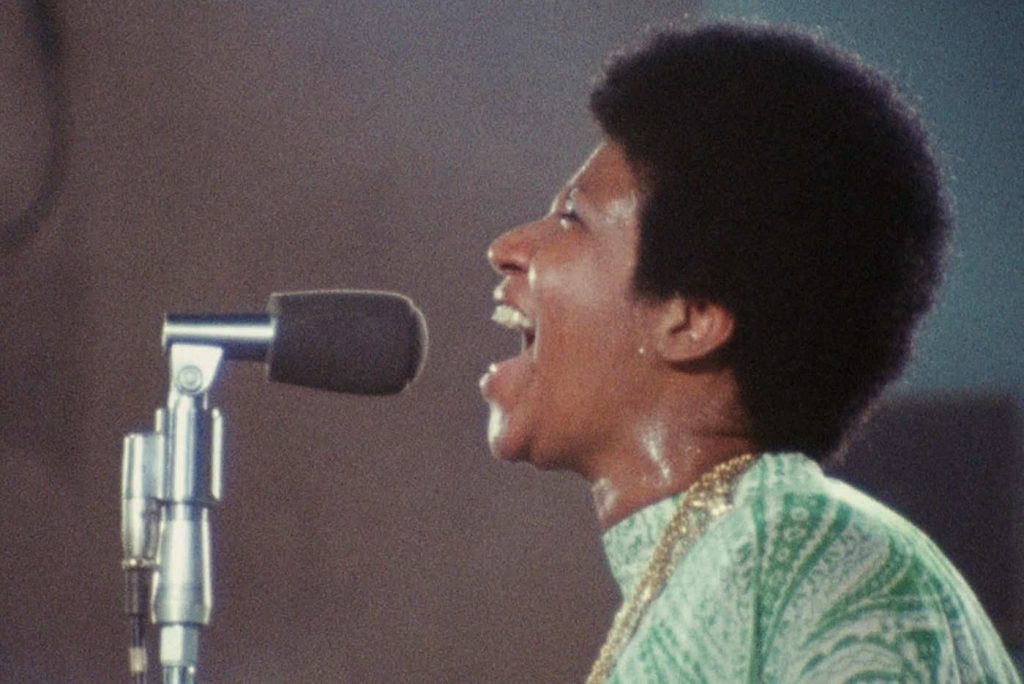