Smoke Seen at Fullerton Airport is Part of Emergency Training 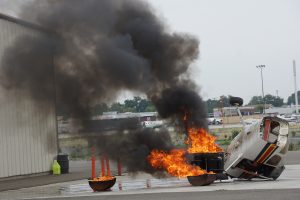 Fullerton Airport hosted emergency mutual aid response training teams designated to respond to an incident should one occur at the airport. Specific units from Anaheim, Brea, and Fullerton fire departments and Orange County Fire Authority  are pre-identified and would respond under mutual aid agreements. This training spans the week to allow all rotating shifts to participate. All units have gate cards that allow 24/7 access to the field, and radios allowing communications with the control tower that coordinate all activities using the airport.

As a part of this training, fires were ignited on a damaged plane and the simulated response required crossing the active runway. This was controlled by the tower, and allowed realistic dialog between two agencies that normally have no interaction. The simulated fires were contained using the facilities available on the field, and the two ‘deceased’ were removed and handled by responding medical personnel.

If you would like to see just what this valuable resource provides Fullerton, mark your calendar for Saturday, June 22nd when the 6th annual Airport Day opens its gate to the public between 10am and 4pm for a free family day of commercial and military exhibits, a tour of the tower, jump houses and other activities for the kids, plus food and helicopter and plane rides available for a fee. Admission is free. The Fullerton Municipal Airport is located at 4011 W. Commonwealth Ave. 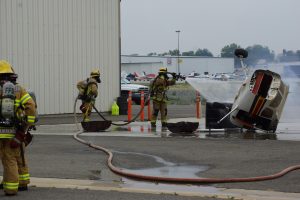