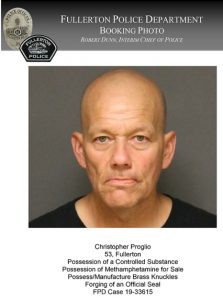 Fullerton undercover police detectives conducted surveillance at a dog kennel/boarding facility in the 100 block of W. Walnut Ave. in Fullerton on June 5th around noon when they spotted Christopher Proglio who they knew was living inside the facility and who was on probation and who had a current warrant for his arrest.

Proglio was found in possession of 28 grams of heroin and 1.6 grams of methamphetamine. A further probation investigation of the facility turned up numerous items indicating that narcotics sales were occurring from the kennel facility.

The owner of the kennel, Richard Sanders, and two employees – Juan Coronado and Jennifer Sandoval – were all arrested for drug paraphernalia and drug possession. 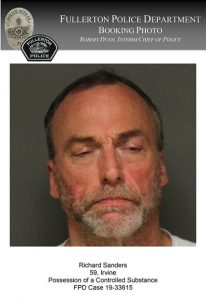 The kennel facility housed around 20 dogs which all appeared to be in good health at the time of the investigation. OC Animal Care was called to inform them of the arrests and suspected activities occurring at the kennel. The animals were left in the care of an employee who did not appear to be involved in the suspected narcotics activity.

The investigation is on-going. Anyone with information is asked to contact Sergeant Gharah at 714-738-6127 or via email to pgharah@fullertonpd.org. Those wishing to provide information anonymously may contact (855) TIP-OCCS.