A large group of residents from Rancho La Paz Mobile Home Park in Fullerton attended the June 4th council meeting with signs, expressing their protest of the massive rent increases proposed by the park’s new owner, John Saunders. The residents, who have spoken at numerous meetings before, asked council for help with an ordinance preventing these rent hikes. 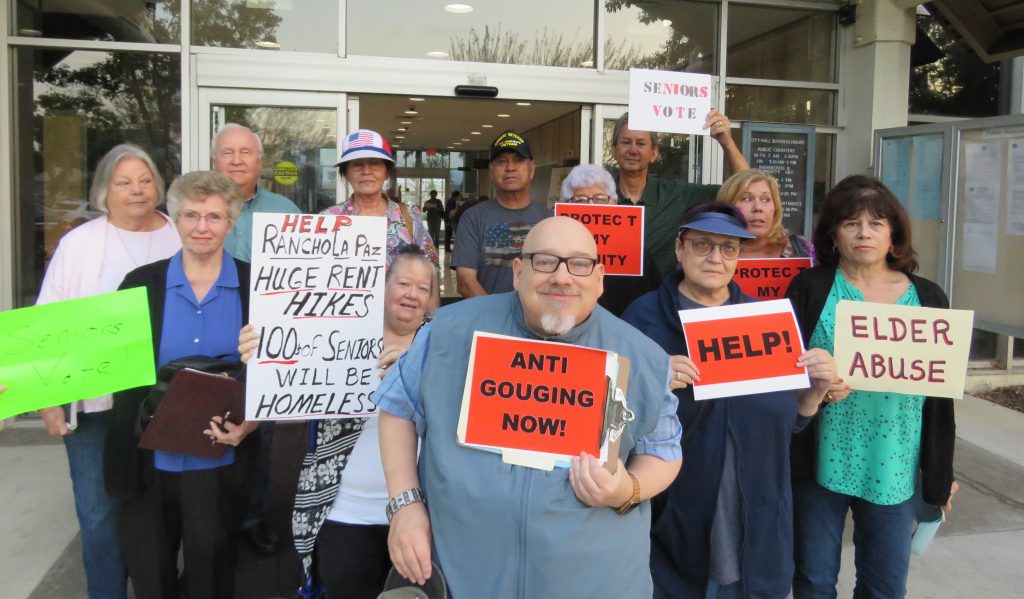 Homeowners of Rancho La Paz mobile home park in Fullerton/Anaheim showed up at the June 4 Fullerton City Council meeting to urge council to enact an ordinance to protect them from rent gouging.

“My name is Todd Harrison and I’m one of the endangered residents of Rancho La Paz Mobile Home Park,” one resident said.

Harrison said that, since the proposed rent increases, over 40 mobile homes are for sale in the park, and their values are dropping.

“As the situation now stands, without assistance from this council, there are residents who will be forced out of Rancho La Paz with no equity or compensation of any kind,” Harrison said, “They will be homeless and unable to afford housing anywhere in California, let alone here in Fullerton, where many have been residents for decades.”

He said that Mr. Saunders has not committed to any specific rent reductions: “Mr. Mayor, council members, Mr. Saunders lied to you. He still flat-out declares that he is not negotiating, and that his current 2.5-year profitability goal is around 300% of existing rents.” 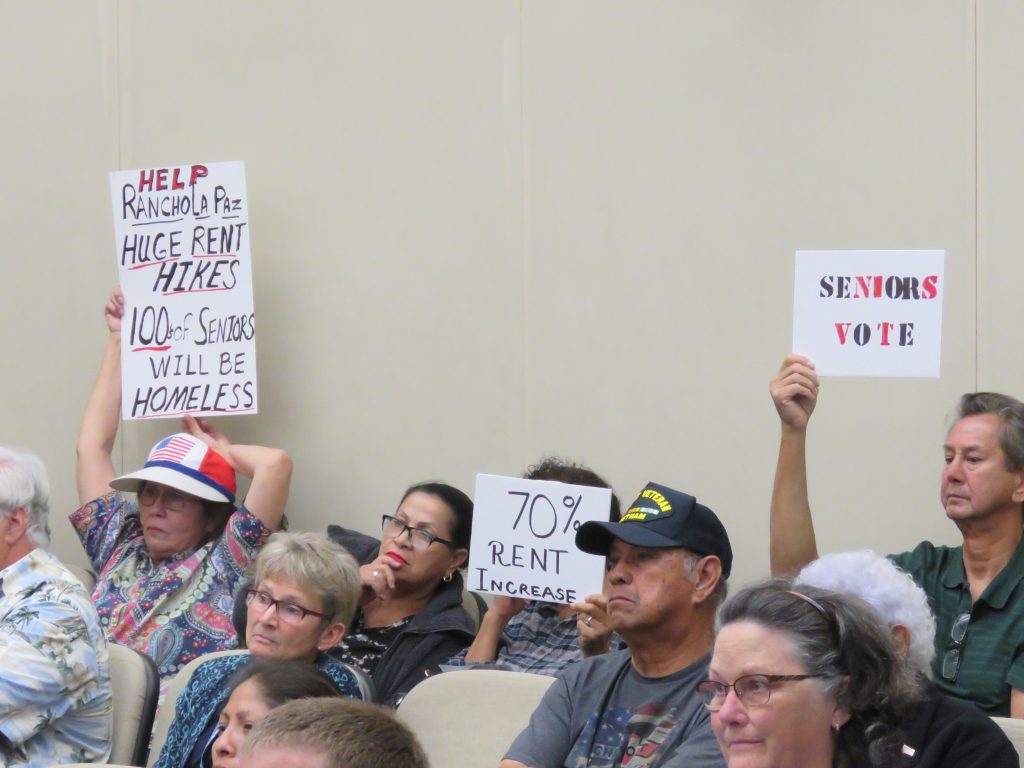 Additionally, recent construction in the park has temporarily eliminated visitor parking, blocking caregivers and providers of service for the senior park. This construction has also closed the swimming pool, a listed amenity of the park, which is also affecting home values.

June Perez, another resident who has spoken many times during council meetings, asked those in the audience who are from Rancho La Paz or support the cause to raise their hands. The majority of the nearly-full council chambers raised their hands and held up signs.

“We’re approaching warm weather, and our pool has been closed. We have seniors who are arthritic who swim every single day in that pool in order to keep healthy,” Perez said. She urged council to read about the background and track record of Mr. Saunders, who has done this with other mobile home parks. 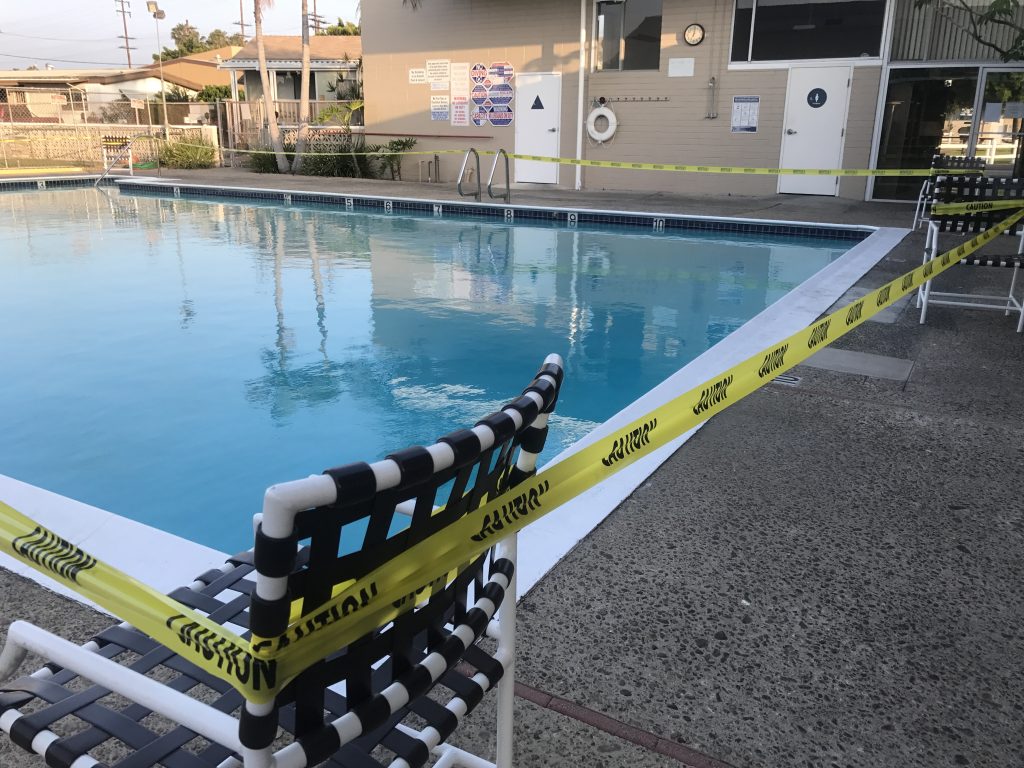 In addition to 50% increases in space rent for mobile homeowners at Rancho La Paz, amenities are disappearing. The pool has been shut down and visitor parking spaces have been eliminated for up to six months to make way for construction that won’t benefit homeowners.

Back in February, when Mr. Saunders bought the park, Perez and her husband (who is nearly 90) got a notice of a $390/month rent increase.

“I cannot tell you the number of hours of sleep that have been lost in that park since Feb, 28 when we got our notice,” Perez said, “Our minds and hearts are being affected by postponing this. We need some help.”

Perez said that it is in council’s power to enact an ordinance to prevent this kind of rent-gouging.

Another resident named Debbie said, “I now have extreme anxiety because of the enormous rent increases.” She said she has applied for food stamps, raised her car insurance deductible, and is having to give up her long-term health care insurance and life insurance in anticipation of the rent increase.

“So I’ll need to choose between life insurance and space rent when the time comes,” she said.

“We’re still here and we are really counting on you,” said Rosemary McCloud. “Tonight there was a program on television about the homeless situation in Orange County and LA county getting increasingly worse, and many of them are people who can’t pay their rent. I’m afraid my husband and I may be joining them. It’s a heck of a way to end a career. He spent 20 years in the military. Both of us spent 25 years as missionaries, serving God. I just want you to know we’re still here, and we’re still suffering. And we’re betting on you.” 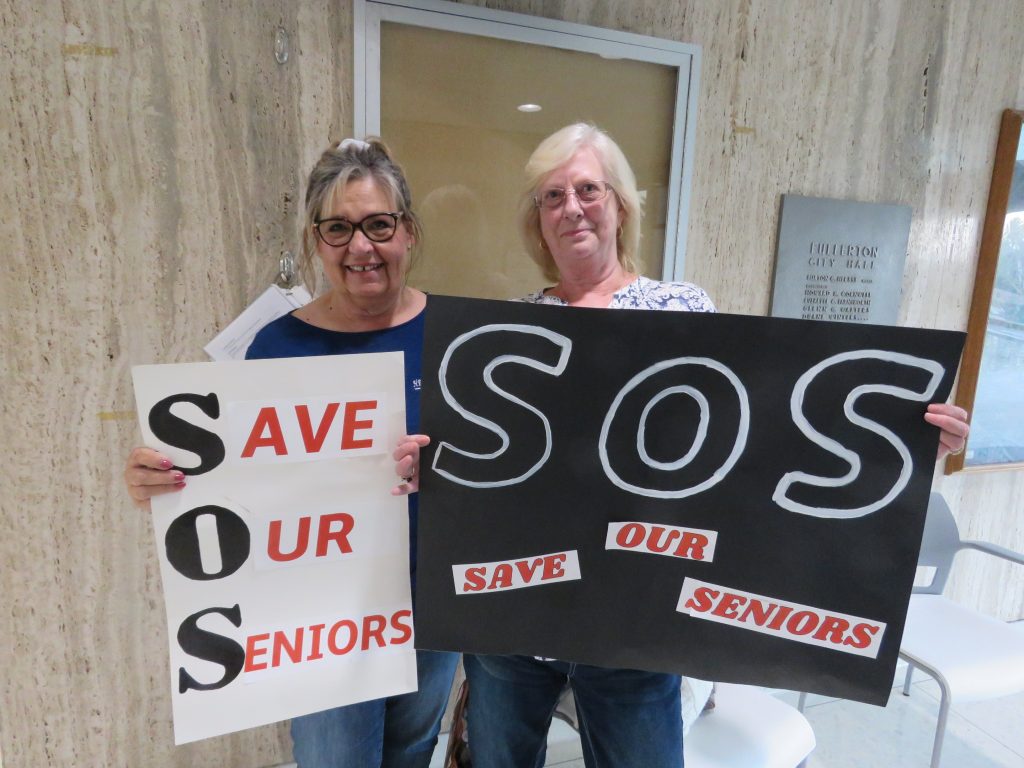 “We need you [elected officials] to be as angry as we are,” said another resident. “Most people don’t believe there’s anything to be done, and all they have is fear, and the little anger goes away. But we’re not going away. I know that none of us wants to leave our homes, want to leave our friends, want to leave this beautiful city of Fullerton, this wonderful county of Orange, let alone this state of California. We need your help to stand up, get angry. Show that you are not afraid.”

The truth is there is something council can do—they can enact a rent stabilization [aka rent control] ordinance for mobile home parks, as numerous other cities (including San Juan Capistrano) have done, to protect residents from unreasonable rent increases.

Council Member Flory said she has spoken to the city attorney about looking into options for Rancho la Paz, and he said that he will have a report in a couple of weeks.

“Rent control is a heavier lift than some other more creative kind of thing, but I would like for our council to be presented with options prior to our July meeting so we’re ready to spring if there’s something to spring about. We don’t know where we are on this right now,” said Flory.

Council member Ahmad Zahra said, “We need to look out for one another and not ignore neighbors who are struggling. For the residents of Rancho La Paz, we are not just listening. We are looking actively for some solution. We are hoping that some resolution will come…we are looking at all options, and they are on the table.”