Before passenger trains serving Fullerton were taken over by Amtrak in 1971, the Santa Fe Railway was the city’s primary ‘intercity’ passenger railroad.  The Santa Fe’s arrival to the area in 1887, and its role in the establishment of Fullerton, was explored in a previous article in this series in the Early May 2019 issue of the Fullerton Observer. The Union Pacific (UP) Railroad also ran local passenger trains to Anaheim via Fullerton, which connected to long-distance trains in Los Angeles. This lasted only until 1929, just six years after the opening of the UP depot, when UP passenger rail service was replaced with Union Pacific Stage Co. buses connecting to mainline passenger trains at East Los Angeles.  The inter-urban Pacific Electric Railway also connected Fullerton to cities across Southern California from 1917 until regular ‘Red Car’ passenger service ended in 1938 (described in a previous “Rail Town” article in the Mid May 2019 Fullerton Observer). However, the Pacific Electric was considered a regional trolley transit system and not a true ‘intercity’ railroad which offered passenger service for long-distance travel. 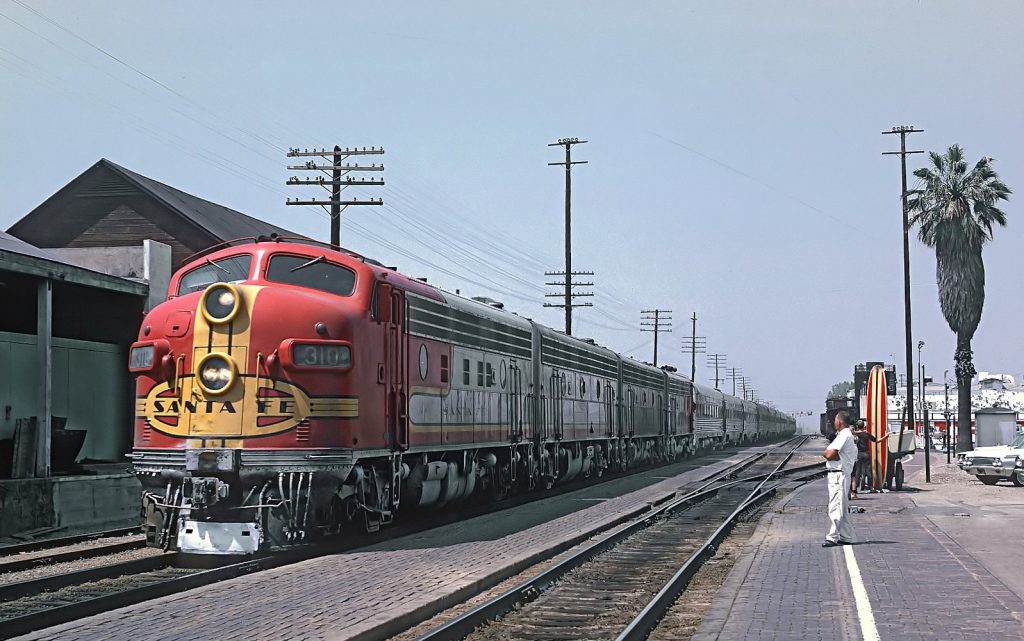 Atchison, Topeka & Santa Fe (ATSF) F7A 310L locomotive with train #76, the San Diegan arriving at Fullerton station on August 20, 1967. The train shown in this photo consisted of 4 ‘F-unit’ locomotive sections, 11 coaches, 1 coach-lounge, and 1 baggage car. Due to an ATSF Family Fare Program instituted for the summer months, this particular San Diegan was larger than normal.  Note the passenger at right with a surfboard, a tradition which some passengers continue today on the Amtrak Pacific Surfliner and Metrolink Orange County Line trains. Photo by Roger Puta, public domain-Creative Commons.

The Santa Fe (formally known as the Atchison, Topeka & Santa Fe Railway) continuously provided passenger service to Fullerton from 1888 until the start of Amtrak in 1971. Before the “Placentia Cutoff” (the connecting railroad tracks built east of Fullerton station) was completed in 1910, service through Fullerton was focused on the LA-San Diego ‘Surf Line’ route. By 1911, local LA-San Bernardino passenger trains stopped at Fullerton in addition to LA-San Diego service. Below are described several notable named Santa Fe trains which ran through the city.

The Angel and the Saint-

The Grand Canyon Limited ran more or less the same route as today’s Amtrak Southwest Chief train from Los Angeles to Chicago. Entering service in 1929, the Santa Fe’s Grand Canyon Limited first ran through Pasadena until the route was shifted to Fullerton ten years later (though it temporarily went back through Pasadena again 1943-46). From 1946 onwards it made a Fullerton stop daily for a quarter century until Amtrak took over Santa Fe passenger services in 1971. True to its name, the Grand Canyon Limited provided a direct connection at Williams, Arizona for tourists taking the Santa Fe’s Grand Canyon Railway to the South Rim of the Grand Canyon.  The “Canyon”, as it was popularly known, was not Fullerton’s first long-distance ‘trans-continental’ train. At various times from about 1915 to 1940, the Santa Fe’s Missionary, Scout, and Navajo trains stopped at Fullerton with direct service to Chicago.

The San Diegan began service on March 28, 1938, making two roundtrips per day between Los Angeles and San Diego.  It was an ‘express’ upgrade of the Santa Fe’s well-established and popular Los Angeles-San Diego “Surf Line” rail corridor service. Faster trains using the new diesel-electric ‘streamliner’ locomotives (like the one shown at Fullerton in the 1967 photo above), replaced the earlier generation of steam locomotives.  Service doubled to four roundtrip daily trains in 1941. For the first few years, between San Diego and Los Angeles the San Diegan stopped only at Santa Ana and Oceanside with special racetrack ‘flag stops’ at Del Mar. Similarly, the train made a “conditional discharge stop” each way in Fullerton starting in the mid-1940s. Regularly-scheduled San Diegan service to Fullerton started on September 29, 1953, when two trains each way began to make scheduled stops. By the mid-1950s, frequency of the San Diegan reached seven trains per day. It was dropped to three daily trains each way in 1965. After Amtrak took over in 1971, service was gradually increased back up to seven roundtrips per day by 1980, and eleven by 1998, with some trips extending to Santa Barbara and San Luis Obispo.   In 2000, Amtrak renamed the service the Pacific Surfliner.

Future articles in this series, in upcoming issues of the Fullerton Observer, will explore the decline of U.S. passenger rail service during the second half of the twentieth century, and the story of the two passenger railroads serving Fullerton today: Amtrak and Metrolink.

The author would like to thank Harold Benash and Dave Norris of the Southern California Rail Plaza Association/Fullerton Train Museum (www.fullertontrainmuseum.org ) for providing historical information and review of this article.